“Elle Decor Cover Inspiration” Each designer is to select a cover from a pre-selected group of ten that was the most synergistic with their design sensibilities. And, they were required to create this look on a restricted budget – “Luxury for Less” – by shopping throughout LA.

Winner receives a feature in July/August issue of Elle Decor

I thought this was an interesting challenge – to take inspiration from an Elle Decor cover and make it their own. I also think that making them do it on a budget was an appropriate twist to their regular PDC routine. A bit difficult to make them shop in places they’d never been to, but at least the producers gave them internet access to research where to go. (the internet really is the designers’ new best friend. That and a digital camera).

Andrea is definitely a beige person and she selected the cover room that made the most sense for her. It has architectural elements in the windows and high ceilings that would be interesting to an architect. Quite frankly, I think the person standing in the window is what makes this room interesting. Otherwise, it’s basically a collection of interesting pieces in a simple room. It doesn’t attract my eye – much like any of Andrea’s work this season (with the notable exception of her Chef’s table win). [Edited to add: I just read Margaret’s blog and she said this was her best selling issue of the last three years. Go figure. I will, however, stick by my feeling that the person standing in the room smiling at the camera had something to do it.]

I think that Andrea’s windows are great looking, but they are spaced too far apart and ended up looking too thin. Or, it’s just that the odd little prints on the wall are too small and do nothing to connect the windows to each other or the sofa to the windows. Michael Berman commented that there was nothing that brought the eye up and I agree. The windows might have served this purpose, but she needed a big bold cornice molding around the ceiling to really pull it together. I would imagine that the inspiration room has beautiful moldings, although they are no shown in the photo. She did try an interesting treatment on the baseboard. But it wasn’t really worth the effort it took to do it once, not to mention twice when she repainted the moldings. No one would get down on their hands and knees to see that she had embroidered the baseboards. She would have been better to paint the lines on. I have to wonder why Todd was so positive about this idea in the workroom. “Beautiful, gorgeous”? The walls were basically too empty – with the exception of the artwork on the right. One of the first things I thought Andrea was missing was something graphic like the zebra print rug in the inspiration room. I guess that this artwork is the “graphic” element – but it doesn’t quite cut it. Otherwise, she did capture the eclectic “collection of stuff” nature of the inspiration room. Too bad she couldn’t have had her carpenter, Blair, stand in the window and breath life into the space.

Matt Lorenz
This was an odd choice of inspiration for Matt. What I think makes this space is the bold striped wallpaper. He focused on the word “Dreamy”, I think this is more “Dazzling”. It’s not calm, it’s not empty. It’s vertical and bold and not monochromatic – which is what he took from it. Interesting what different people see in spaces. The mix of furniture is beautiful and is very Matt-like.

Matt is a boy who doesn’t like to shop with the regular people and this “Luxury for Less” challenge was a big one for him. I thought the idea of the floor was amazing. Sarah, his carpenter, deserves props for getting all those cuts made and the floor laid. I think that the finish on the floor didn’t do it justice. The judges never commented on them (at least, not on air) and it’s a shame that that much work wasn’t better showcased. But, time is never on their side, so a nice poly finish wasn’t probably possible. I liked his idea of hanging the art off a rod system and it too bad it wasn’t accomplished. It would have added more vertical lines to the space – which would have paid homage to the wallpaper. He was also very much missing his mirror on the right, especially as the side board is relatively small. So, the room ended up looking lopsided. The seating arrangement is probably much more interesting in person than it appears in this front facing photo – as he created a dual seating area. I would have loved to have seen a striped rug. (ok, enough with the stripes, maybe I’m being too literal). The artwork on the rear wall, the window treatments and the day bed were beautiful! I can’t help but think that upholsterers everywhere were thinking – FINALLY – a designer realizes how hard this job is!!! I also loved the mirrored windows.

In general, this was not his best effort. It was pretty flat and the sum didn’t equal the parts. However, Matt was the winner of this challenge and I know that a room will look and feel completely different in person than it does on the screen. Is this the room that will be in Elle Decor? I wonder if they “finished” it, or recreated it for that photo shoot… We’ll have to see when the issue comes out. Congratulations Matt! Two magazine photo spreads! 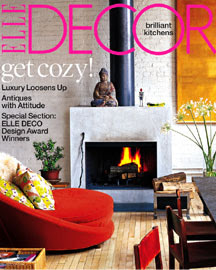 Oh, Carisa… great instincts. Needs to learn to keep her mouth shut and stop pushing. But, she’s got verve and a strong viewpoint. Which is a accomplishment for someone in their mid-20’s. I love that she clearly loves what she does and I truly believe that her personality issues come from a place of positive passion, not negative anger. All the online polls have consistently shown her to be very unpopular with viewers, but she’s got talent and it she’s been consistent (with the notable exception of her Chef’s Table room). I would say that she was too literal in her plan – down to the load of firewood. The rear wall was a winner. As the judges said, she was way over accessorized. I must say, though, that Margaret’s comment about it not being luxurious enough for Elle Decor was interesting, considering Carisa really did do quite a literal copy of the inspiration room. But again, we’re not seeing it in person. The custom sectional was a triumph – although they never showed it getting made. The desk and chair on the left were pretty blah and seemed more like filler.

So, we’re down to our final two – elegant and luxurious Matt & bold and kicky Carisa. Both need a bit of the other to really pop as designers. I am in complete agreement with this final pairing and have no preference who actually wins. I hope they both do their best work in the final challenge so we are all wowed and inspired. Interestingly (or not) neither Matt nor Carisa have websites or any online pages that show their professional work. So, unlike some of the designers, going into this series – we had little to go on.

Sadly, unlike Project Runway, I’m not sure if this show has inspired viewers to pick up their paint brushes and re-do their spaces. Since I didn’t watch PR in its first season, so maybe that’s an unfair comparison.

One more week to go.