Often, we hear terms relating to design styles and are not entirely sure what they refer to. In the second of my ongoing Design Glossary posts, I wanted to explain the Gustavian Style, which is a personal favorite of mine. I asked Tricia Mitchell of the fabulous Avolli – Scandinavian Antique Furnishings – in Maine to share her expertise with us.

Gustavian furniture is named after one of the most famous European Kings, Gustaf III of Sweden. It was Gustaf III’s cultural interests and passion for architecture and design that resulted in an artistic golden age in late 18th century Sweden. Gustaf’s affinity for the court life at Versailles, his intense desire to amass an artistic collection rivaling any in Europe and his extensive travels resulted in some of the great sculptors, artists and architects of France and Italy to be brought to Sweden and create for the monarchy. It was during this time that the Gustavian style was born. The Gustavian style is a restrained interpretation of the French Louis XV and Louis XVI style and it evolved throughout the late 1700’s and into the early 1800’s to become a solid participant in the European Neoclassical period. Simpler in design and execution, the Gustavian furniture reflects the reserved and humble character of this country. While expensive woods such as mahogany were in demand by the nobility, the painted finishes that we know today as the Gustavian style, is what was affordable for the average Swedish citizen. The high styles coming out of Stockholm were adapted using more affordable and available pine which was then painted in light colors such as white, grey, blue or yellow to support the reflective ability sought during their long dark winters. Here are a few examples of quintessential 18th & 19th Century Gustavian furniture design. 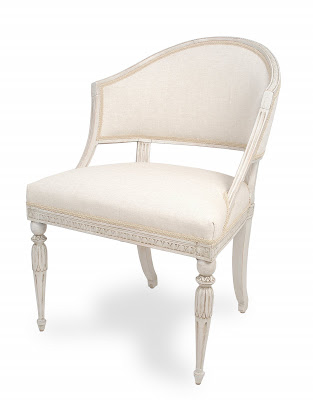 An exquisitely made Gustavian open barrel back armchair from 1795 and attributed to Ephraim Ståhl, one of the foremost chair makers in Stockholm. This piece has a gracefully shaped backrest subtly embellished with an elegant basket weave detailing along the top. The base of the chair boasts a beautiful egg and dart carving detail and sits upon round leaf carved and tapered legs in the front and simple square and tapered legs in the back. 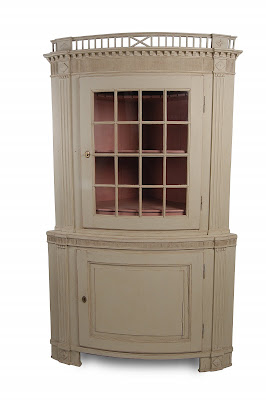 Pic. 11-05-A-419 Exquisite Gustavian period stepped back corner cupboard in two pieces and restored in a warm white paint with wonderful carving details. The piece begins with a galleried top over a dentil and reed carved pediment flanked on each side by stylized columns. The eight panel glass door is gently arched and opens to reveal two shelves and two small drawers. The bottom half of the cupboard repeats the reed carving pediment and stylized columns with a single arched raised panel door that opens to reveal two shelves.

A Gustavian style Swedish mirror from the first quarter of the 19th century. Surmounted with a carved ribbon detail, the mirrors frame has a beautiful pediment with egg & dart carving above a delicate pearl band. This pearl carving is repeated around a diminutive oil painting on canvas depicting four maids. The delicate carvings are continued around the perimeter of the mirror and accented with a winding ribbon detail. The simple plinth base is embellished with pearl, egg & dart carvings