So, I’m looking at my August Domino that just came in the mail – packed with do’s and don’ts from several of today’s big name decorators. I generally don’t ascribe to hard and fast “Do’s and Don’ts” rules because really, decorating is personal and transient. I’ll have more to pick over from this issue, but the first thing that really popped out at me is on page 60, “We all make mistakes” – the admission from Suzanne Rheinstein that “Stying with branches of coral is so overdone, even though I use them myself”. Huh… In September 2005, I did a post, Coral, Coral everywhere where I talked about the abundant use of the coral motif in decorating. The image links in the post are no longer active, but as I recall, I showed a lampshade, vases, fabrics, bedding, etc. My point, which I would still make, is that the overuse of a motif pushes it to the realm of trend and trends come and go. Today’s coral could be tomorrow’s lava lamp. Not wrong, per se, just tired feeling. However, if you love the lava lamp for its’ own sake and not just because it’s “in”, then you should go for it. Decorating is personal. 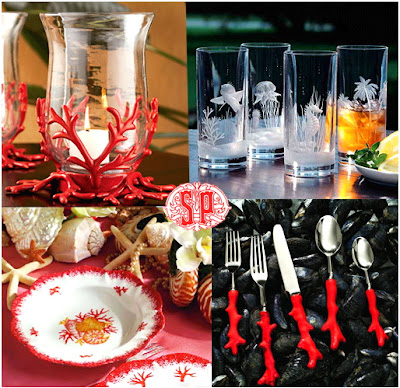 From the Source Perrier Collecion

From Vivre.com
The coral trend is still going strong, but it makes one wonder – is it still special if everyone is doing it? And if professionals keep using the same items in their work over and over again – even when they know they are overused – what does that say?

5 thoughts on “Domino Magazine: Decorators, step away from the coral ?”