I went to a lovely event tonight in my town. Duxbury was founded in 1635 by John and Priscilla Alden – of Mayflower fame. Priscilla Mullins came over with her family, all of whom died over their first winter here in the new world. At 18, she was one of the only available women around. The much older Captain Myles Standish, a widower, set his sites on Priscilla. But, rather than approaching her himself, he sent John Alden, Cyrano style, to speak for him. Priscilla, a woman clearly ahead of her time, had no interest in one of the most important men around, but instead had eyes for John himself, a mere cooper. When presented with the Standishs’ intentions towards her, Priscilla looked John in the eye and said “Speak for Thyself, John Alden”. He did. They did. They eventually moved from Plymouth Colony to the verdant green fields and marshy grasslands of Duxbury, about 10 miles to the north. This is their original homestead, which was really quite large for its day. John and Priscilla had 10 children and their descendants abound today.

Last year, the Alden Kindred of America started an annual event called the “Speak for Thyself Awards” which honors amazing women who embody the spirit of Priscilla, speaking for themselves and others. 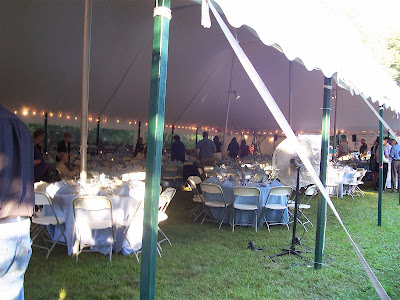 This year’s event was held under a tent on the homestead property. 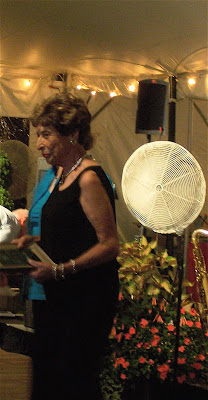 The first honoree was 80 year old Phyllis Godwin, owner of Granite City Electric, a $100M electric supply company that was founded by her father in the early part of the 1900’s. At a time when women were not expected to take over the family business, Mrs. Godwin’s husband took over the business when her father died. Upon their divorce, as a single mother, she took back the business and expanded it beyond anyone’s expectations. She’s been a leader in the business community and an inspiration to women in business ever since. 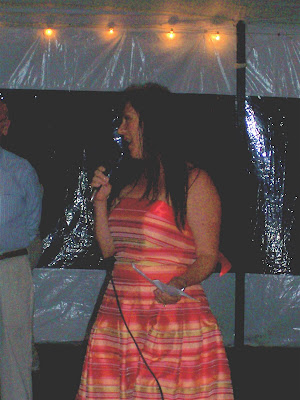 The second honoree is Elizabeth Nightingale, a personal friend of mine. She and her husband Jerry (a high school classmate) are the parents of two children, the older of whom has multiple medical and physical challenges. Elizabeth has worked tirelessly to see that he, and other medically fragile children, receive the same educational and social opportunities as any other child. Elizabeth is also one of the busiest volunteers in town (we met while decorating a house museum for a Christmas tour) and also one of the chicest woman in town. 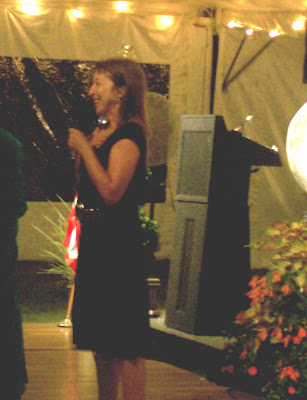 The final honoree was Marianne Leone Cooper, (here’s where the Hollywood comes in). Actress (The Sopranos), writer and activist, Marianne and her husband Chris (yes, THAT Chris Cooper) lost their son Jesse at age 17 to cerebral palsy in 2005. As parents of a handicapped child, they worked tirelessly to be sure that he was mainstreamed in their local public school system in Kingston, MA, where Jesse achieved honor roll status. Marianne is a Massachusetts native and the two make our little South Shore their home – which couldn’t be further away from La-La Land. And meeting them, you can see why. Both were the nicest people – open to meeting and chatting with everyone, talking about their son and their rescued dogs. Marianne wrote about life as a celebrity wife – and being a non-botoxed middle aged woman in a sea of waif-like starlets – in a wonderful February 2007 piece in The Boston Globe, which you can read here. Marianne and Chris have founded the Jesse Cooper Foundation, which supports a yearly scholarship plus the AccesSportAmerica, an organization with a unique purpose to bring the wild world of extreme sports to challenged kids. Through this program disabled children can experience windsurfing, sailing and many of water activities that normally would not be achieved. A lovely couple who have clearly not let the sad loss of their son stop them from living their lives, helping others and achieving personal and professional success.

OK, my cheesy celebrity moment. Chris Cooper is a gentle and kind man who’s a real babe in person! 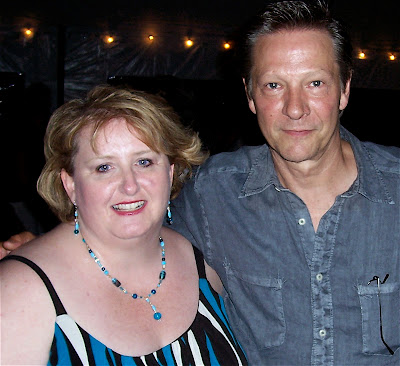 2 thoughts on “When History meets Hollywood”