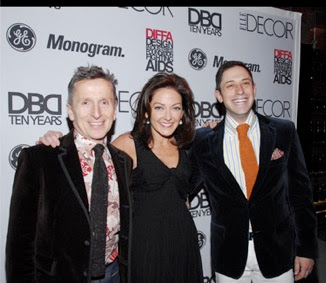 Simon Doonan, Margaret Russell and Jonathan Adler at Dining By Design, 2007
As I wrote yesterday, I had just gotten off the phone from a lovely conversation with Margaret Russell, Editor in Chief of Elle Decor. I had so many questions to ask her and the first started close to home – the New England design scene. While we are world renowned for our arts and sciences, it often feels as if there is little notice in the national shelter magazines – except in the summer when our resort towns (Nantucket and Martha’s Vineyard, maybe the New Hampshire Lakes Region) are “in season”.

So, in this first part of our conversation, I asked:

LM: What does the design industry think of the New England design scene? It often feels like we receive little attention and almost no traveling events. Although I am excited to see the Dining by Design is coming in November!

MR: We’ve [Elle Decor] done a few things in Boston and we try to keep on top of restaurant and stores and things like that. It’s really just the fact that we have a small staff and it’s word of mouth and reaching out and trying to find things. On our part, we just need to work harder to get better contacts and spend more time in Boston, which I will be because we’re doing Dining by Design in December which I’m really excited about. And I think you have a beautiful design center in Boston and there are a lot of really talented designers up there, but for some reason New Englanders – Yankees – are not as persistent at sending things to magazines as maybe some other parts of the country. That’s also part of it, I actually don’t get as many submissions from New England, so we’re trying to do something about that.

LM – What does Elle Decor looks for in the submissions?

MR: To be honest, I look for things where the delivery truck did not just pull out of the driveway, which is what we often get; pictures that are immediate post installation where someone has just moved into a house or a designer has done it and the place doesn’t have a chance to settle in or get some layers. Designers many times feel it’s a matter of “Come shoot it before my clients’ ruin it.” [LM: well, that’s often true!] The best houses are the houses that have developed over time and we are looking for things that have personality.

We have a great Frank Roop project coming out in November that I’m so excited about. It’s going to go to press in two weeks. It’s really beautiful. It’s his own house and it’s filled with color, interesting pieces, some things he’s designed himself and other things that are very cool mid-century pieces and I’m thrilled about it. It’s a big story and a really lovely story. It’s really interesting – interesting curtains and paint treatments, definitely very cool.

MR: We always have to partner with a strong DIFFA chapter… someone who will help produce the events locally because it’s such an enormous undertaking. It’s always exciting for me to go to a new city and I’m very, very excited about Boston, having grown up in New England [CT] and gone to school there [Brown, in Providence]. I really miss spending more time there so it’s going to be a lot of fun.

LM: Margaret, we’re happy to have you back!

Dining By Design is coming to Boston on November 29-December 1, 2007. 2007 marks the 10th Anniversary of DINING BY DESIGN presented by ELLE DECOR and GE MONOGRAM, DIFFA’s signature fundraising event and multi-city marketing platform.

Dubbed the “Cannes of Tabletop” by filmmaker John Waters, DIFFA’s DINING BY DESIGN is an opportunity for various corporations and designers to showcase their creativity and talents by creating unique dining installations to ultimately accommodate their dinner guests.

DIFFA: Design Industries Foundation Fighting AIDS is one of the country’s largest supporters of direct care for people living with HIV/AIDS and preventive education for those at risk. Merging care and commerce, supporters of DIFFA come from all fields of fine design and the visual arts, including: architecture, fashion design, interior design, photography and consumer product design. 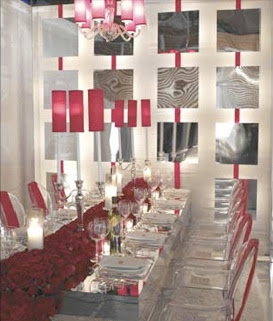