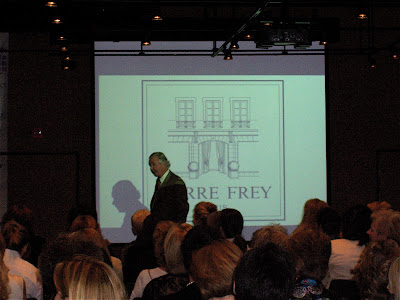 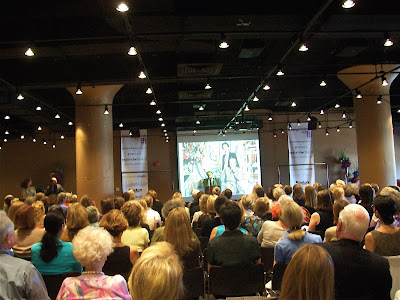 Patrick Frey, head of famed French textile company Pierre Frey spoke to a near standing room only audience today at the Boston Design Center. He spoke of his father, founder Pierre Frey, his mother, Genevieve, who in the 1930’s created textile designs that look as fresh today as they must have back then (see below), his maternal grandfather who was one of the designers of the ocean liner Normandie, and of his sons, two of whom are in the business with him.

I also had the opportunity to have a lovely private interview with Mr. Frey. Below are some notes on his main talk, followed by our personal conversation.

Genevieve – designed by Genevieve Frey, 1930’s. This looks so ‘today’ doesn’t it?

A traditional Toile de Jouy – Coutances Positif
Original toile fabrics were hand block printed. Today, they silk-screen the image onto the fabric, one color at a time. A new engraving can cost upwards of $15-20,000. Traditionally, toiles are single color scenes printed on a white or cream cotton ground. Older toiles (18C) have plain white backgrounds, 19th c technology allowed for background printing as well. One interesting note: Mr. Frey mentioned that he has often been asked why they don’t create coordinating fabrics – such as one with a small flower detail – to work with their primary toile collections. The reason is because their design, engraving and printing process would be the same as the primary fabric, and therefor, the price would have to be the same. However, he feels, and I would agree, that while buyers will pay well for the beautiful primary patterns, they will not hold the secondary prints in the same regard and won’t pay the same for them. I thought this was an interesting view into the business side of an artistic company.

In 1783, French physicist J. A. C. Charles launched a hot air balloon that fell in the small village of Gonesse about twelve miles away from the launch site. The towns people, having never seen a balloon, were frightened, thinking it was perhaps the devil. I don’t have the image, but there was an original toile created, depicting this event. Mr. Frey referred to toiles as “ancient photography”. Pierre Frey has updated this event in their “Petit Gonesse” fabric – which has a free hand, calligraphic quality to it. In the print, you will see the downed balloon (upper right), the farmer trying to kill it with his farming tools and women looking on. I’ve looked at this fabric in the showroom several times – it always captures my attention – but knowing the background story makes it so much better!

La Paix (Peace)
On this fabric is printed the word “Peace” in something like 30 different languages, including braille.

While the images above are mainly shown in neutrals, each has a couple of different colorways available. Here are some additional images that strike my fancy:

Patrick Frey’s passion for his business and the art of textile design is quite evident. He said that he feels that they should have no limits, except that they remain very French. So, while he takes inspiration from all over the world – Africa to Montana to the Seychelles – he maintains a uniquely French perspective. He shared with me that while he loves color, the majority of buyers – around the world – hesitate over the use of bright colors and that neutral palettes are the best sellers. He knows that when he creates a new design or collection, a larger percentage of the colorways must be in neutral palettes in order to generate sales. He did say that Americans tend to be more adventurous in our desire for color and mixture of patterns than are our European friends. I was actually a little surprised by this.

I asked him which country embraces the Pierre Frey brand the most. While America is their biggest market (due to our size), they are more popular in the European countries such as England, France (of course), Belgium, etc. He also mentioned that the Eastern Europen block countries – Russia, Estonia, etc., and some of the So. American countries – are fast growing markets for the brand. He said that over the last five years, their young people have become wealthier and are highly knowledgeable about design trends in Europe and America.

Ultimately, Mr. Frey said that he goes with what he personally likes when creating a new collection of designs. He doesn’t rely on marketing or trends to “advise” him on what will be successful. And, at times, he’s been surprised by what sells well and what hasn’t. “You never know”, as he said. He does, however, listen to the reactions of audiences when he shows his designs – the “ooh and ah” factor.

I think he’s done a pretty good job so far!

My thanks goes to Patrick Frey for his time and to the French Embassy for their generous invitation!

Pierre Frey fabrics are available “to the trade” only.
Click here for purchasing information via our Buyers Service