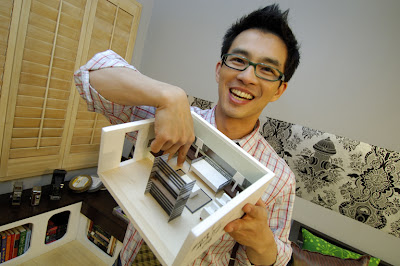 Goil on Trading Spaces
Note the scale model – he’s got to be one of the only TS designers to do that! 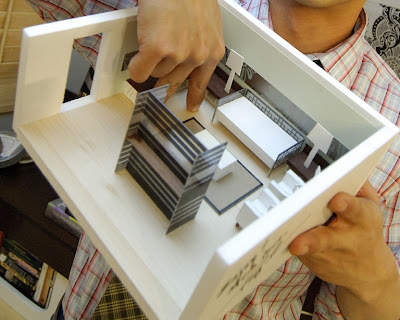 As I wrote last week, Goil Amornvivat whom we met on BravoTV’s Top Design is now one of the stable of regular designers on TLC’s refreshed Trading Spaces series. Goil was nice enough to spend a little time with me on the phone chatting about his experiences on both shows and what he’s up to these days when not appearing on television.

Goil has an extensive resume (he only looks like he’s a teenager!). This from his bio on the Parsons School website: “Artist, designer and educator whose work spans multiple disciplines including architecture, landscape and interior design. From Bangkok, Thailand, Goil received a B.Arch from Carnegie Melon University and a M.Arch from Yale University. An associate at Robert AM Stern Architects, he is lead designer for competition winning schemes and high profile projects including the International Quilt Study Center in Lincoln, Nebraska and a performance venue for the proposed NYC 2012 Olympics. Currently a partner at TuG Studio in Brooklyn, NY. Goil’s work has been exhibited at the Carnegie Museum of Art, Lower East Side Tenement Museum, and the Oribe Design Center in Gifu, Japan. Goil received an award from the Americans for the Arts Public Art Network (PAN) for Regarding the Mihrab, and entry of note from the National Aids Memorial Competition and Finalist for Telematic Table at the Walker Center for Art.” All that, and tv too!

Linda: How did you come to be on Trading Spaces? Did they seek you out, did you have to audition?
Goil: They came to me right after Top Design to talk about the possibility of being on the show and one thing led to another. I’d been a big fan of the show so am appreciative of being able to be on the show now, it’s been really great!

L: A few years ago, I attended a talk by former Trading Spaces designer Vern Yip. He talked about the designer packet that all the designers receive prior to shooting an episode. It includes photos and floor plans of the spaces, plus interviews with the homeowners. Vern mentioned that the designers weren’t required to even read these documents and that some did and some didn’t. [As an aside, I do think it’s obvious who did and didn’t!]. Do you still get these packets and do you study them prior to the shoot?
G: Yes, we receive these scouting packets a few days before the shoot and the designer can use or ignore them. I do take this packet to heart and come prepared with drawings and plans – which is hard to do in two days!

L: Tell us about your experience so far? How many episodes have you filmed?
G: I’ve done three shows and it’s been a learning experience. Unfortunately, my Grandfather died just as I was beginning to tape one of the episodes [which aired 2/9/08], so I was dealing with my emotions around that, while trying to be open to the homeowners needs and tape the show. I look at Trading Spaces as little windows of opportunity. The excitement generated by the show coming to a neighborhood is great. The people there come out asking for the different designers – who’s going to be there and what’s happening is really great and shows people are engaged in the process.

I went into architecture because I was interested in public art and I wanted to engage the public and architecture is the ultimate public art. People see it and they have to respond to it and it becomes a dialogue. And a show like Trading Spaces brings the concept of design to a different audience – a wider audience. What better way to make it accessible to every one.

L: There has been a big deal made around the return on Paige Davis, who hosted the show at the beginning, then was sent packing and the show went to a non-host format. I know I stopped watching around the same time – although I can’t say it was in response to her leaving the show. What do you think of her return?
G:I think Paige coming back to the show has made the show fabulous. It’s a really top quality show and I realize that it has to do with Paige coming back.

L: What is the one thing you want the homeowners and the viewers to come away with?
G: I want them to know that I really care about design and I care about the homeowners and I want them to have the best. I try my very best and have an optimistic spirit. And I believe that construction (building) is a metaphor for relationships in life. I want to show America that they can have good design and that if I can do it, they can do it. I want them to be able to see the possibilities. Life is worth living and you have to do it with great spirit. And, that you don’t have to spend millions of dollars to have a great space.

L: As part of the process in design school, we’re used to being regularly critiqued and criticized on our work by fellow students and teachers , but we’re not being criticized for our personalities. Does the public commentary which often seems so personal – such as on blogs or message boards – get easier the more you do this?
G: It’s a learning experience and I’m just trying to realize that not everyone is going to like me for who I am.

L: What else are you up to?
G: I just moved my office in Brooklyn and we’re having a lot of fun; working on several projects. [Goil is a Co-Founder of TuG Studio] I’m also teaching interior design at Parsons School of Design. Teaching is another route that I’m taking to engage the public. In the past four or five years that I’ve been there I’ve taught hundreds of people, who go out and have an impact on lots more people.

L: A year on, how do you feel about having done Top Design? Was there anything you’d have done differently?
G: No. I think that both Bravo and TLC are great and that if Top Design lead to me doing Trading Spaces, then I’m really glad that that happened.

L: Thanks, Goil, for the interview!

When I was critiquing Top Design last year, I didn’t always agree with the choices Goil made in his designs. But, it was always obvious that he brought something special to the process – which was heart. Not everything worked but it wasn’t for lack of spirit. I think those reality shows are really gauntlets and to come out the other end with opportunities and no regrets is probably really rare. Chatting with Goil on the phone, I realized that my initial assessment of him as a warm, caring and committed personal was spot on.

Edited to add: The fun and funky wallpaper that Goil used in this room is called “City Park” and is available at Flavor Paper in New Orleans. They don’t seem to show the black and silver colorway that Goil used, however. At $150.00 for a 15′ roll, we can see why he used only one roll in the project!