Well, I had such a lovely day yesterday! The weather was spectacular – warm and sunny – which is a big bonus here in New England where it can still be 40’s and rainy on a regular basis. After photographing my front yard which I blogged about yesterday, I treated myself to a glorious pedicure (Michelle’s Nails in Duxbury – go… now!) and a nice read of Vogue Living Australia (more to follow on that).

The weather was so perfect that I decided to drive around town and take some photos. Duxbury, MA is a small, very old, town which was an offshoot of Plymouth Colony, founded around 1637. We have our share 300+ year old homes and lots and lots of new, big homes as well. We’re a small town of about 16,000 that is sometimes derisively called “Deluxe-bury” for our high home prices. The town thrived early on as a ship building port, until the ships got too big for the harbor, at which point – mid-1800’s – the town fell on hard times. One of the results is that many of our Federal era homes were not updated and tarted up Victorian style, so they retain their original clean lines and proportions. 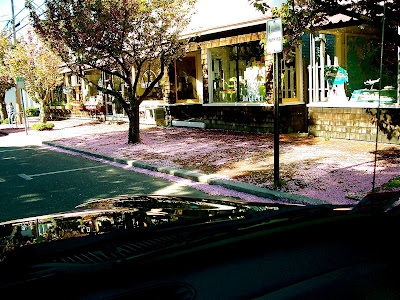 Having grown up here, moved away and moved back to be closer to friends and family, I often retain the teenage attitude of “what’s so great about this town” and “there’s nothing to do here!”. So, it’s good for me to remind myself of the natural and architectural beauty of our small New England town. Above is a photo of our tiny town center, Halls Corner, (5 roads converging on a flag pole – keep to the right!). The cherry trees are losing their flowers and the sidewalk was paved with pink flower petals. It looked a bit like a fairy parade had passed by. 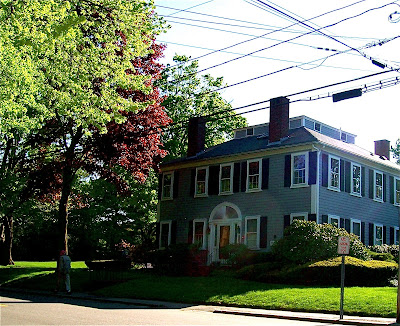 Here is one of our old Federal homes, near the harbor. 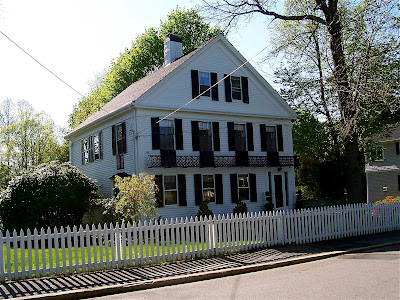 This Greek Revival is one of my favorite houses in town. Not huge, but oh so pretty with it’s iron work facade. It kind of reminds me a bit of New Orleans. 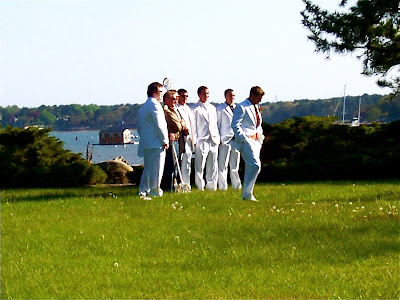 It was prom yesterday and I captured this group of boys from the Lacrosse team posing for a buddy photo on the water, with their families playing dutiful paparazzi. Not sure how I feel about the matching white suits… 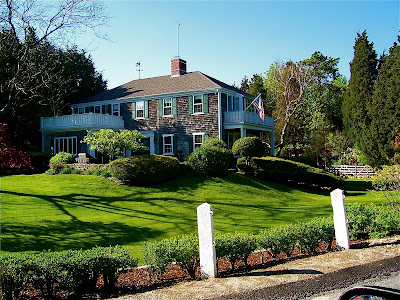 There isn’t much industry in town, so when I was in high school and college, I had a myriad of babysitting and cleaning jobs around town. This lovely house was one of the homes that I cleaned one summer. I always loved this house and it’s setting. I think cleaning houses as a teenager made me appreciate the importance of a well-maintained home. Some places were very well kept up, the owners generous and unassuming, and others were nearly falling down, with sloppy homeowners who fancied themselves very elite. I know to this day whose house I’d want to decorate and whose I’d steer clear from! Here is a pic of the bay. Duxbury is on the Atlantic ocean, but we have a barrier beach separating the town proper from the actual ocean. So, water view homes are on the Bay 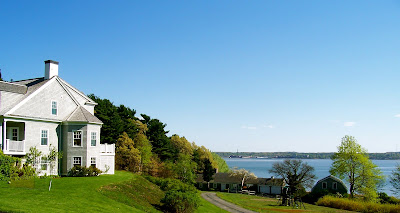 This pic is the same as the above, panned to the left a bit. What you see on the right is an older, small home right on the water, with a new construction of huge proportions hulking over it on the left. We have a lot of this. 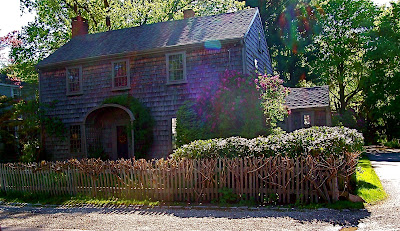 And old home with amazing old growth plantings, not yet in bloom. 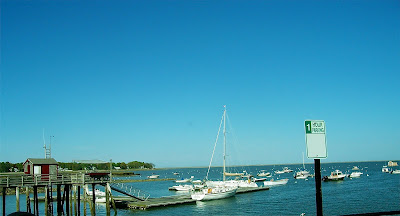 A new construction on Powder Point. I should drop off my business card! 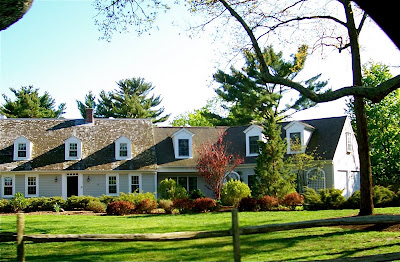 This is another house that I cleaned a couple of summers. The homeowner who I cleaned for was an elderly European woman who had exacting standards and all cotton sheets which needed to ironed with a very hot iron. I did a lot of ironing that summer. She was very old fashioned, and while she made me my lunch on the days I was there, we never actually ate together. I ate in the kitchen and she in the dining room. Funny. She was very nice and always interested in my life and interests. But, she couldn’t bridge the upstairs/downstairs divide. Or perhaps it was generational? This is also the first house that I played a decorating role in. I made a set of dust ruffles for the twin beds in her guest room. I recall they were a sprightly yellow cotton duct. 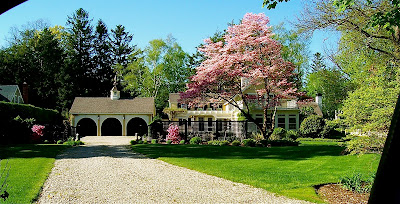 This is also one of my favorite houses in town. The grounds are spectacular and the house is situated in a very out of the way corner. I believe this house has appeared in a national magazine spread more than once. 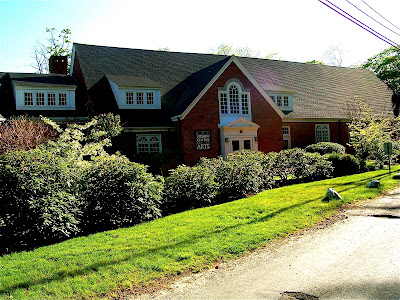 Here is the Ellison Center for the Arts, which was once the Catholic Church. 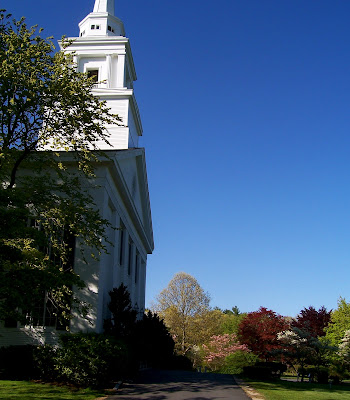 Here is the First Parish Church, one of our oldest town buildings. Once when I was in high school, a friend and I got access to the bell tower, and scratched our initials inside the bell. Shhh… don’t tell anyone! 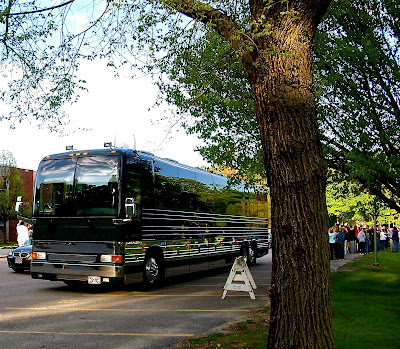 We’re not without our town celebrities as well. Yesterday was Prom, as I mentioned above. Duxbury has no large function halls or hotels or restaurants, so historically, Prom was held out of town, often many miles away. Being a town with little to do and sometimes a little too much disposable cash, we have a long standing reputation for too much teenage drinking and there was a long stretch of time where a drunk driving related death of a high school student was an annual occurrence (3 in my time in high school). So, at some point, the powers that be decided to put an end to out of town proms, and they are now always held in the high school gym. A very quaint small town kind of thing. So, in order to dress up the pig (aka gym- shudder, shudder, shudder), the big room is transformed into a wonderland of epic proportions (last nights’ theme was an Evening in Paris with ceiling high Eiffel Tower). A Hollywood Red Carpet style promenade brings out townspeople of all ages to watch the beautiful people (aka teenagers) arrive. The more interesting the mode of transportation the better. Kids come in boats on hitches, stretch hummers, bakery or ice cream trucks, fire trucks, Dad’s convertible, beds carried by “slaves”, bicycles built for two, Cinderella’s coach, and the list goes on. This year, the largest mode of transport (probably one of the largest ever) was the tour bus of a famous rock star who lives in town, whose son is dating the daughter of two of my oldest friends. Unfortunately, I missed their arrival and didn’t get their picture! And then my camera batteries died, so I got no other pics either!

Anyway, here are a couple of slide shows with more photos of my Duxbury Day, 2008. Hope you enjoy!

7 thoughts on “Duxbury Days: A view of my hometown”