BravoTV has created an awards event called the A-List Awards, which is airing this Thursday at 10PM EST.

Blogging pal Laura K from Blogging Project Runway attended the taping last week in NYC and did a great series of posts and took loads of photos of all the big Bravo reality tv stars. Click here and here for the inside scoop!

Laura shared with me this photo of four of the Top Design Season 1 contestants: 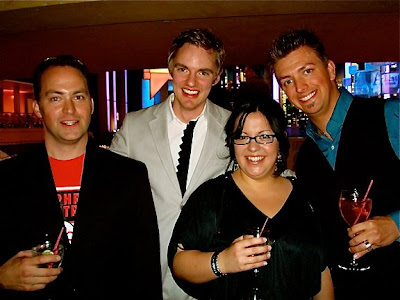 I’ve been wondering when TD season 2 is set to air. It’s been shot, they’ve announced changes to the program with India Hicks as the new host. But another Project Runway is airing soon, as is Shear Genius and Flipping Out. WHERE IS MY TOP DESIGN!!! They said it was set to air in the third quarter of the year. So they have until the end of September. I guess PR will end with Fashion Week in September, so they can slip TD in under the wire. Anyway, there was an interesting little tidbit on Blogging Project Runway about a PR connection to TD season 2, so I guess we’ll have to wait and see on that score.

Meanwhile, if you’re a fan of Shear Genius, the folks behind Blogging Project Runway have just announced the launch of Blogging Shear Genius. So, check out the fun!

3 thoughts on “Bravo TV A List Awards and where IS Top Design?”