As I mentioned earlier this week, I was going through a storage closet and found a stack of color mood boards that I’d forgotten that I had. I also found the design boards to one of my final design school projects. They’d previously been damaged due to a flooding problem that I have (an ongoing drama chez moi) and I’d moved them upstairs. Boy – these brought back memories of late nights and A LOT of hard work. I thought I’d share the boards – they really were a lot of work for me. I’m not a facile artist – I can draw, but not quickly or easily.

My professor for this course at the Boston Architectural College was architect Sheldon R. Kostolecky. He’s an amazing artist as well as architect, as you can see by the image below. So, we students had a lot to live up to! Sheldon, although certainly not old, is from the old school as far as his work is concerned. No computer renderings were allowed! 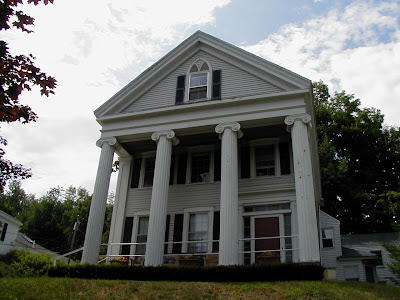 The project was to design a modern family home based on a traditional architectural style. I chose Greek Revival – which is one of my favorites! We were given a dossier on the fictional family of five, which consisted of a mom and dad, a girl and two boys. The house was to be approximately 3,000 square feet which included a 600 square foot garage. Since this was an interiors program, we were not required to draw exteriors – thankfully!!! And, we weren’t required to draw up construction documents, also a big relief.

Here is the floor plan of the first floor. My plan called for a left entrance front door (as you face the outside of the house) with two windows to the right. The front door opened up to a grand entrance hall with black and white checkerboard marble tile, placed on an angle. To the right of the door was the formal living room. As I’m looking at this I see there is no fireplace in the living room. I don’t remember making this decision — maybe I forgot? There is one in the back of the house, so maybe I decided that was fine. Hmmm – I think now I’d have had a fireplace. Often, in this architectural style, the fireplace would have been run up the middle of the house vs. on an outside wall. However, I chose to open up the floor plan, so the only place I would have had for a fireplace would have been between the two side windows. I would also now do a different furniture plan – probably two facing sofas running parallel to the front of the house – which would have cozily flanked the missing fireplace! This would have given me a nice fireplace in the master bedroom as well. As they say, hindsight is 20/20!

Through the living room we come to the dining room with seating for 10. I love to entertain, so if this were my house, I’d want a large formal DR. Beyond that was a small butlers pantry, which was fitted snugly between the mudroom and the kitchen. The mudroom led to the garage and included cubby and storage for coats and boots, as well as the laundry. To the left of the butlers pantry was the kitchen and beyond that, the family room.

Here is a detail of the living room floor plan.

And this is an elevation of the formal front staircase looking from the living room and the front windows and front door. The moldings were all all meant to be very traditional dentil moldings and fluted columns. All the woodwork and moldings were to be painted a high gloss white. 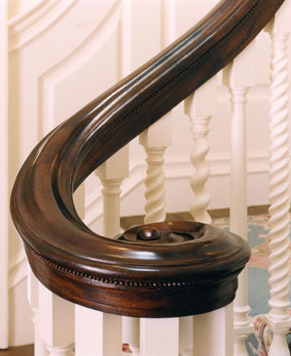 This is what I had in mind for the banister and spindles and crown moldings.

The column and beam to the left of the front door seperatated the hall from the living room. My design for the window treatments are detailed in the left window and traced in on the right-hand window to show the architectural detail. I chose to have nearly floor to ceiling windows – although this is traditionally less common in New England than it is in, say, New Orleans, but I just love big windows!

Below is an elevation and floor plan of the kitchen. Kitchens aren’t my thing – so clearly, this was pretty un-finished looking.

I had in mind that the kitchen would be similar to this Christopher Peacock “Classic Kitchen”.

The family room in the rear of the house would consist of an eating area with fireplace, family room comfy seating and a media center. There would be a backdoor leading out to a patio.

There was a long hall leading to the front of the house and the door to the master bedroom. In this space, there was room for a seating area, queen size bed and television armoire. There was also a walk-in closet and en-suite bath with water closet, tub and seperate shower and dressing table.

Down the hall towards the back of the house, I had two childrens bedrooms, a single bedroom without bathroom and a double bedroom that had its’ own bathroom. In the el off the main house, the first floor was the garage which had a staircase that lead to the second floor home office/guest room. The reason for the small bathroom in the back hall was so that those using the home office or guest room had easy access to a guest bath. The el had several gabled windows and lots of room for storage.

We were not required to do detail plans of the upstairs – thankfully! This was a lot of work. Thanks for letting me share it again!

We also had to do a materials board with fabric samples, furniture ideas, etc. But this board was totally ruined by the flood, so I didn’t bother taking a photo of it.

Btw- I got an A! Although I was also one of the last students still standing by the time this project was due, so part of this A was acknowledgement of my tenacity to stick out a very hard class with lots of corrections and re-do’s… and sleepless nights!