This week on Music Hall Monday, we visit The Paris Opera House (now known as the Palais Garnier). which was built by architect Charles Garnier between 1857 – 1874. The building, located in the 9th arrondissement in the heart of Paris, is known for it’s ornate exteriors of the Neo-Baroque style.

For a lover of symmetry, this street layout is just spectacular! The current urban planning of Paris was brought about by the controversial Baron Haussman in the 19th Century.

Rear view of the Palais Garnier. Now, that’s what I call verdigris!

Paris Opera Commentary “Although described by a contemporary critic as ‘looking like an overloaded sideboard’, it (the Paris Opera House) is now regarded as one of the masterpieces of the period. Here Garnier triumphed over a cramped and difficult site, handling the carriage-ramps and approach steps, the foyers and staircases, both in section and plan, with confidence and skill. The style is monumental, classically based and opulently expressed, as the times demanded, in an elaborate language of multicoloured marbles and lavish statuary. Throughout his life, Garnier was criticized for his excessive use of ornament, as Napoleon and Haussman are still accused of being inspired by an out-of-date and imperialist showmanship expressed in a language already debased. Such critics forget that every city needs its occasional monuments and occasions of grandeur, and that thanks largely to these three men, Paris remains one of the most beautiful cities in the world.” — John Julius Norwich, ed. Great Architecture of the World. p214.

It’s ornate interiors are equal to the exterior, the most well-known being the main stair case. 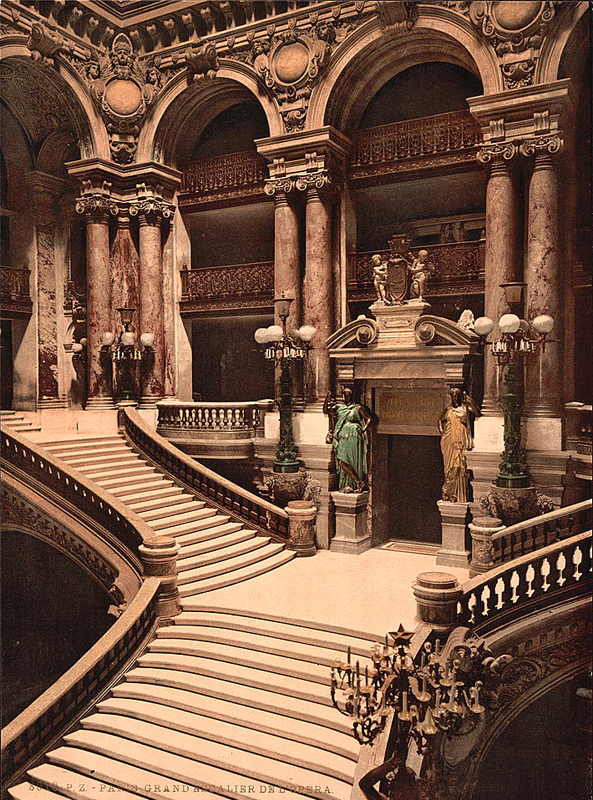 The main stair in the Opera House is a feast for a photographers eye. From any angle, there is something astounding to shoot.

In 1896, one of the countr-weights for the chandelier fell, killing one. This, as well as the underground lake and other elements of the Opera House, inspired Gaston Leroux in 1910 to write his Gothic novel The Phantom of the Opera.

The main stair case was replicated in a fantastical manner in the 2004 movie starring Gerard Butler and Emmy Rossum based on the Andrew Lloyd Webber’s stage musical. The interior consists of interweaving corridors, stairwells, alcoves and landings allowing the movement of large numbers of people and space for socializing during intermission. Rich with velvet, gold leaf, and cherubim and nymphs, the interior is characteristic of Baroque sumptuousness.

The main concert hall seats 2,200 and the ceiling area, which surrounds the chandelier, was given a new painting in 1964 by Marc Chagall. This painting proved controversial, with many people feeling Chagall’s work clashed with the style of the rest of the theatre. This video is a pretty slow rendition of this piece, but the beginning shows the trompe l’oeil curtain raising and a very nice stage setting. Princess Grace of Monaco (formerly Grace Kelly) , at age 48, on the roof of the Opera House, 1977

I shot this image from the café on the top floor of Printemps Department store last year. You can see the Opera House just behind the dome. And yes, I am kicking myself that I didn’t tour the Opera House in person when I was there. I stayed right next store at the Hotel Scribe too!

Speaking of hotels, come back tomorrow for Travel Tuesday where I will showcase a few of Paris’ amazing boutique hotels!