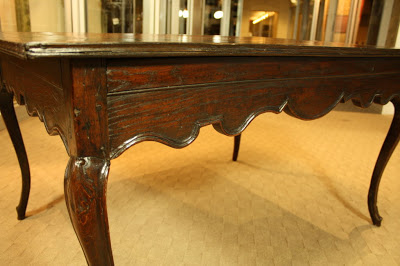 Pull up a chair to the table…

Let’s have a little light…

French Gilt-Bronze and Crystal Chandelier with Colored Fruit, France,Circa 1830
Gilt-bronze chandelier with cut crystal central column and colored bohemian glass drops in the shapes of apples and pears. The chandelier dates from the Charles X period (circa 1830), but the fruit drops were probably added later.

Pair French iron sconces with gilt-tole detailing, and clear and colored crystals in the style of Maison Bagues.

Pour the coffee… do you take cream?

Old Paris Porcelain Coffee Service with Napoleonic Emblems, France, Circa 1870
Old Paris porcelain coffee service with gilded Napoleonic emblems, including bees, stars and laurel wreaths. The set includes a coffee urn with cover, creamer, sugar with cover, and ten cups and sauces — 25 pieces in total. The pieces are signed, probably by the person who painted the ornaments.

Some warm bread with fresh butter…

Carving service, Late 19th century
French silver carving service comprising a knife, two forks (one with bone tines), bone spoon and handle for holding a leg of lamb. Stamped with the Minerva No. 1 hallmark.
With fresh fruit for dessert!

Details from a signed Italian 19th Century Still Life Oil Painting, Italy, Circa 1860
Italian oil painting of still-life with woodpecker and fruit in beautiful carved giltwood frame. Signed by the artist, Francesco Malacrea. Malacrea was born in Trieste, Italy in 1812, and died there in 1886. He attended the Academie de Venise and among other things is known for painting the ceiling of the Palais Sartorio in Trieste.

Will you join me?