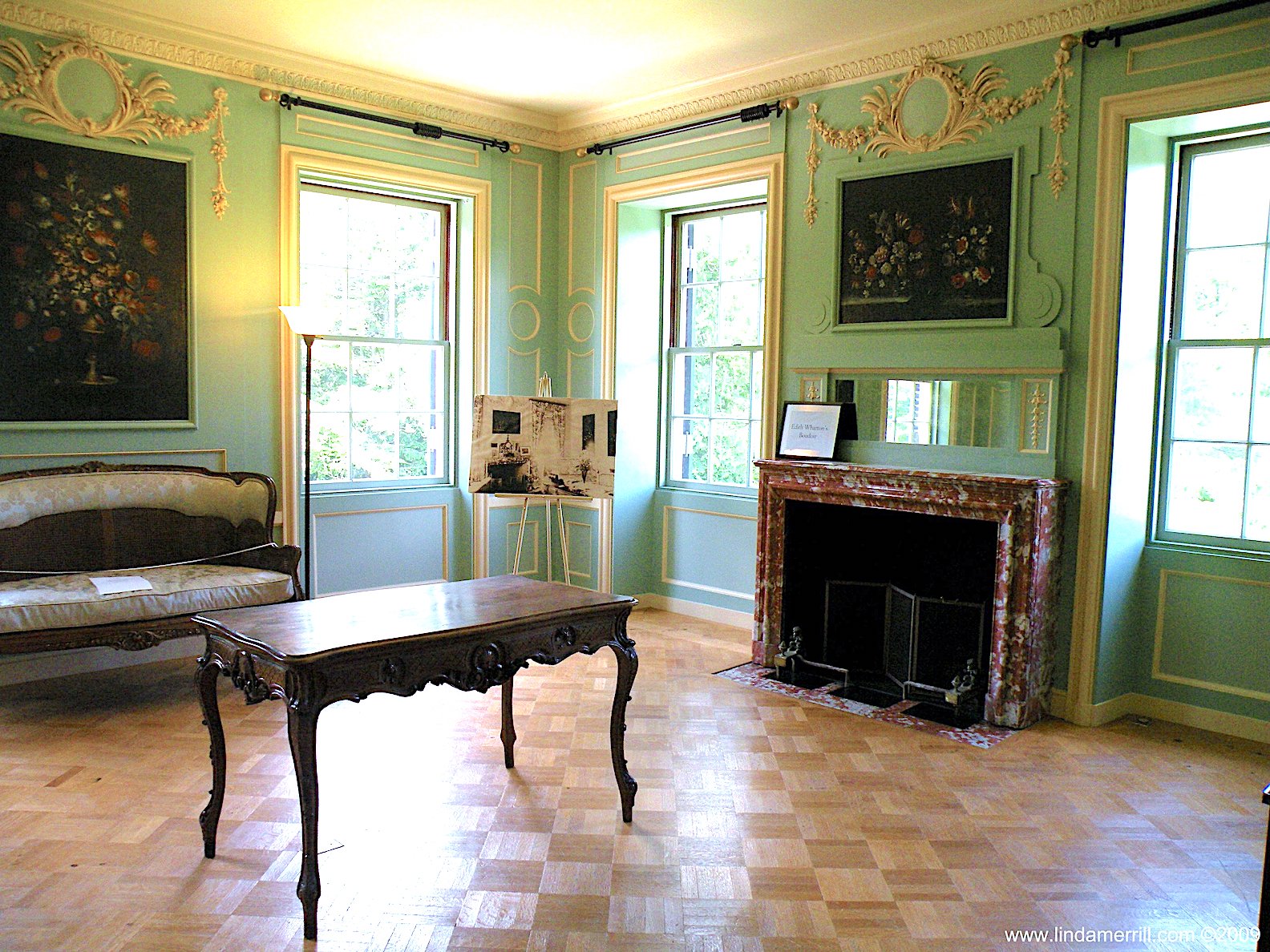 Over the last few weeks I’ve been indulging in a pretty detailed series of posts on Edith Wharton’s Berkshires home The Mount out in Lenox, MA. I’ve never spent so much time and thought on one property – ever. It’s been a fascinating journey for me and I hope for you too!

Today we have Edith Wharton’s personal spaces – her boudoir, bedroom and bathroom. According to the tour information, her bedroom suite (on the second floor on the right, when facing the house from the rear) were the most significant rooms in this house filled with significance. Several of her books were written here and the design and decor epitomized her closely held precepts of interior design. Although her boudoir had a desk, she primarily did her writing in bed in the morning. The suite was the most private group of rooms in the house and servants could come and go from the various rooms without bothering her, regardless of which room she was occupying.

There wasn’t a floor plan of the second floor, but it’s the same footprint as the first, so I marked it up based on my recollection of the layout. EW’s Boudoir is an ornate jewel box of a room. The Boudoir is the room where she would have visited with close personal friends and handled the household business. Accordingly, the decorative detailing was quite high. Gorgeous, no? Ogden Codman, Jr. designed this space which included eight floral still-life paintings brought over from Milan. The original furnishings included a desk, a sofa, and a daybed, with toile curtains and upholstery. The original paint color has been restored and the room will eventually be re-decorated as it was in EW’s time. Edith’s bedroom is right over the library in the back corner of the house overlooking the gardens.  Imagine, her sitting in bed, in her bedclothes with a lap desk and pen in hand – writing. I’m telling you, if she were here today, she’d be a blogger. Now, all I need is a secretary to pick up my pages as they float to the floor, and type them up for me! The bedroom wallpaper, which has also been reproduced from remnants found on site, is a soft felted paper. Apologies  I didn’t get a better image!  Note the complete difference in level of detailing between this room and her boudoir. EW’s bathroom features wallpaper reproduced (by Scalamadré) from the original found in situ. Interestingly, she was actually against the use of wallpaper as she felt it was unsanitary and obscured architectural detail. And yet – wallpaper was used in both the bathroom and her bedroom. In keeping with her design theory, these two spaces – being private and not public – were relatively very simply fitted. On the The Mount bedroom floor was a sewing room, a closet for EW’s dresses, a linen closet and her maid’s bedroom. The image below is the Linen Closet, which included storage as we see here and linen presses on the other side. According to the Tour Guide, EW was a caring and considerate mistress of the house to all her household staff. She’d grown up with servants and had seen all to often how they were often mistreated. I believe the guide said that her head butler (or some similar position) actually gave one of the eulogies at her funeral.

A big thanks to the Edith Wharton folks for giving me a shoutout on their blog this week! I’m flattered by your kind words!

If you enjoyed The Mount bedroom, please also enjoy:

The Mount Entrance and Gallery

The Mount Library and Den

The Mount Grounds and Gardens

9 thoughts on “Edith Wharton The Mount Bedroom, Boudoir and Bath”