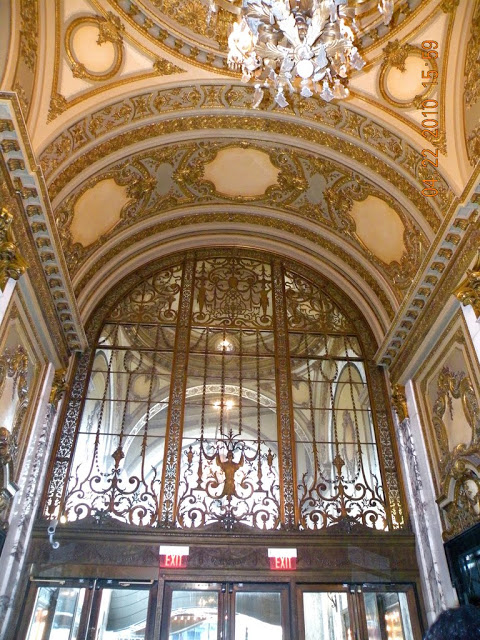 Inside the lobby looking out towards the street.

Last week, I took a tour of the Boston Opera House with several members of my IFDA chapter. What a gorgeous place and the history is even more remarkable. I’d been in the building for some performances in the late 80’s and it was in a sad, dilapidated state then and was finally refurbished over a two year span between 2002-2004. I wanted to share some of the photos I took last week, plus a brief history of this gem of downtown Boston.

The Opera House was built in 1928 by Edward Albee (great-grandfather of the playwright) to memorialize his best friend Benjamin Franklin Keith. They had been business partners and theater owners since the late 19th century. The theater, named the BF Keith Memorial Theater, was designed by architect Thomas Lamb and cost approximately $5Million to build. This was a true vaudeville palace with shows taking place all day long. Mr. Albee had exceptionally high standards and wanted his theater to be a family place, open to all, especially the middle classes.

Workers and performers were fired on the spot if they used vulgar language or exhibited vulgar behavior. Apparently “son of a gun”, “slob” and “hully gee” were big no-no’s. Boston had a thriving Burlesque industry and the BF Keith Memorial Theater was not going to be mistaken for the burley-q!   After Vaudeville was replaced by the “talkies”, the theater was converted to a movie palace known as the RKO Keith Theater.

In 1965, Sack Theaters purchased the building and renamed it The Savoy. The proscenium arch was bricked up and the hall was split into an upper and lower theaters.  In 1978, Sarah Caldwell, of the Opera Company of Boston, purchased the building and renamed it The Opera House. She struggled mightily throughout the 1980’s to stage opera in Boston, but never had the funds to properly care for the rapidly decaying building and closed up shop in 1991, when the National Trust for Historic Preservation listed the building as #11 on its Most Endangered list. The ceiling was falling down and there was over a foot of stagnant water in the basement level. In 2002, the city of Boston issued permits to Clear Channel Entertainment to refurbish the building. $52Million dollars and 2 years later, the new and gleaming Boston Opera House re-opened for business. The Boston Ballet regularly performs in the space and it also hosts major theatrical runs, currently “Mel Brooks’ Young Frankenstein”, and other performers.  In 2009, music impresario Don Law and local philanthropist/businessman David Mugar, along with others, purchased The Boston Opera house.  Quite a full circle – from music promoters to conglomerates to artist owed and back to music promoters.

And now my photo tour:

This is the ceiling over the lobby. There are nearly 20 (I think we were told) chandeliers that are original to the building. And they are spectacular! Looking towards the stairs leading to the mezzanine level. The bust in the center background is that of BF Keith, which was lost and then found in time for the re-opening. The carpeting throughout the theater is a copy of the original carpeting laid down in 1928. The red panels are silk brocade.

Looking up towards the mezzanine level hall outside the theater. Across the lobby are a series of false windows and balconies which provide symmetry overlooking the lobby. The view of the lobby from the mezzanine staircase. This is the ladies lounge. Originally, this space had a series of dressing tables where the ladies could sit and chat, reapply makeup and generally gossip with girlfriends. The sconces were set quite low to provide the best light when seated at the mirrors. And yes, if you have a good eye, you will see the Ben & Jerry’s Ice Cream cart reflected in the mirror! The medallion ceiling in the ladies lounge. All the plaster work was done on site during the restoration. This is the sterling silver chandelier hanging in the men’s smoking room. It was impossible for me to truly capture the glory of this piece with my little camera and bad lighting, but wowsa. This is one of several non-working fireplaces original to the building. We were not allowed to take photographs inside the hall itself as the Young Frankenstein set was on stage (copyright issues), so I am sharing these images from other sites. The hall seats over 2,600; 1,300 upstairs and 1,300 downstairs. Mr. Albee’s belief that theater should be available to all meant that there are no bad seats in the house, no obstructed views and very few seats are underneath the mezzanine, which can obscure sound.

As said above, when the building was a movie theater, they created two theaters-one up and one down.The view of this image is from the second level, several owns behind the mezzanine level seats. Imagine a false floor extending off the mezz seats right to the stage, cutting it in two. The horror.

Thanks to the Boston Opera House for hosting our group and providing such an informative tour! Although the theater no long does original productions, it’s so wonderful to see the care that the new management is taking of this architectural and historical gem. After we left the theater,  a few of my friends and I headed over to the new Ritz Carlton for dinner in the lounge.