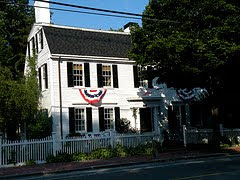 A couple of weeks ago, I took a day trip up to Newburyport, MA. I posted recently about my side trips to Portsmouth, NH, the seacoast and Jewett Farms Custom Cabinetmakers. But, the highlight of my day was just to spend time in my favorite city (sorry Paris!) on earth, little Newburyport, Massachusetts. You see, I used to live in Newburyport, which is an old seaside coastal city, just south of New Hampshire. It’s north of Boston, aka The Northshore. I currently live south of Boston, aka The South Shore, in the similarly antique coastal community of Duxbury, MA. I mostly grew up in Duxbury. I lived in and around Boston for the first several years after college. I’d taken a day trip to Newburyport at some point and was hooked. I just knew that I wanted to live there and so I eventually moved “up north” much to the surprise of pretty much everyone I knew. I didn’t know anyone who lived there. But I felt connected to the place. The connection may be ancestral. My many times great grandfather Nathaniel Merrill emigrated from Essex, England in 1633 and eventually made his home in Newbury, MA. There are Merrill streets all over the place. Kind of fun. Whatever the case, it just felt right to move there. And so about 15 years ago, I did just that. I first lived in a rental apartment, and then moved into a condo in the 200 year old Federal building shown below. I loved this house and my little condo. I was on the second floor, on the right half of the floor (behind the trees). I’ve always loved a yellow house and this was just such a pretty place. You can see the windows of my second floor condo below, running front to back. A little over 800 sq. feet, there were two bedrooms, living room with gas fireplace, galley kitchen, dining room and deck out back. Amazingly, I have few decent photos of the condo interiors, but when it went on the market, the realtor referred to my place as “Martha Stewart”-like in decor. [As an aside, I moved back south because most of my closest friends had moved back to this area and I was feeling like I was missing out. Plus, my parents were on Cape Cod and weren’t getting any younger. Two weeks before my closing, my Dad suffered a massive stroke (this was ten years ago this summer) and it was ultimately a blessing that I ended up closer to them]. But, I still love the town.

My condo was on High Street, which is basically the main drag in town. I took so many pics on my day trip, I need to break them into different posts. So, I’m going to start with some of the beautiful homes on High Street. Enjoy!

Before I bought my condo, I looked at a unit in this Victorian-era house below. It was on the third floor and included the turret.  Ultimately, the price was a little high and the space was otherwise small and awkward. A pretty house in shades of green with an interesting shingle design. This majestic Victorian has seen better days, but it seemed as if it’s undergoing a restoration of some kind. And the carriage house. Wouldn’t this make an adorable house??

This is an old row house that was always apartments and is now condos. I looked at one of the top floor units, which had a view out the back of the waterfront. I forget why I passed on it… maybe it was the price. Or it just didn’t speak to me. I think I liked the exterior a lot more than the interiors, which had been stripped of all original character. This is the “Mall” (pronounced like “malady” not “mawl”). The view is facing across the Mall to High Street and the brick building is the original court house. I hope you’ve enjoyed my tour of High Street in Newburyport. Next up will be some beautiful front doors and other old homes, a couple of shops, and the beautiful marsh and Parker River Refuge.

3 thoughts on “My Newburyport, Pt. 1: Livin’ Large on High Street”