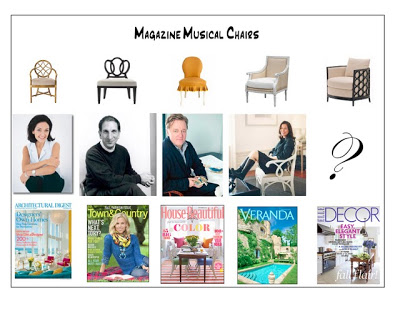 Join Megan, Joni and I as we chat about all the changes in the shelter magazines. Margaret Russell from Elle Decor to Architectural Digest; Stephen Drucker from House Beautiful to Town and Country; and Dara Caponigro from Domino to Veranda. And their replacements? Big shoes to fill.

Have a listen to what we think is good, and bad, about these surprising moves.

ELLE DECOR announced today that  Michael Boodro has been named editor-in-chief. He was the Executive Editor from 2004-2006, and rejoined ELLE DECOR in 2009 from Martha Stewart Living where he was Editor-in-Chief. Previously, he was launch editor for Culture & Travel, collaborating with James Truman; an editor of the Style Section for the The New York Times Magazine; Editor-in-Chief of Garden Design Magazine and Features Editor for Vogue. Mr. Boodro has also held editorial positions at HG Magazine, Harper’s Bazaar and GQ. He is the author of Stephen Sills and James Huniford’s design book Dwellings. Mr. Boodro served for many years on the board of directors of the Housing Works Thrift Shops and is currently a board member of the Gesso Foundation. He began his career in the fine arts sector, and is a graduate of Yale University. In addition to Mr. Boodro’s promotion, Anita Sarsidi has been promoted to Design Director and Florentino Pamintuan has been elevated to Creative Director. Vicky Lowry will assume the Executive Editor title at the magazine.

2 thoughts on “The Skirted Roundtable: The State of Shelter magazines and Congrats to Michael Boodro – new eic of Elle Decor”