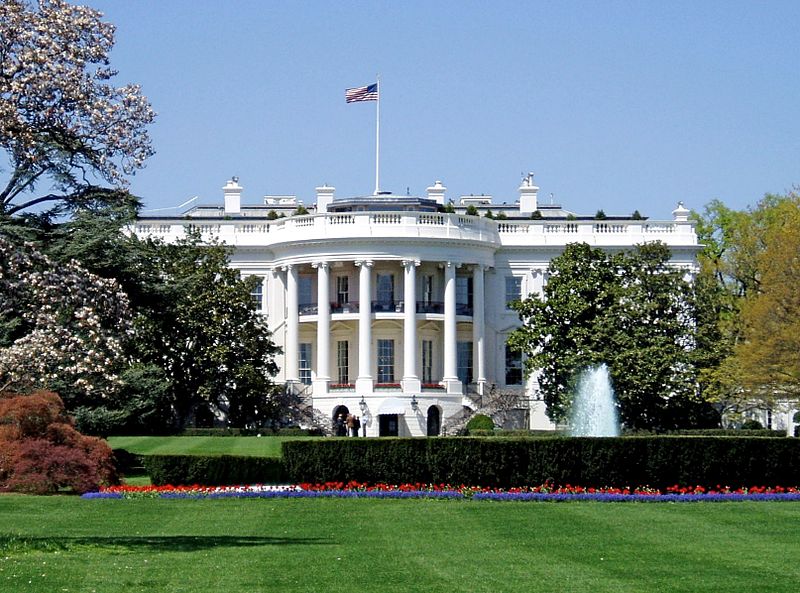 So, we’ve been all chewing over President Obama’s new Oval Office decor. It has been received with an overwhelming … eh… and that’s on the positive side. Some people, perhaps unwilling to publicly criticize Michael Smith, rumored to be the designer, have supported the decor as at least being satisfying to Mr. Obama. Because after all, the client is always right, right? Personally, I think the designer’s job is to bring to the client more than he or she thought was possible. But it must be acknowledged that whether it was Mr. Smith or someone else who did the design, it couldn’t be easy to design by committee. Some wonder why we should care, it’s his office after all. And to that, I say, no, it’s not. The White House isn’t known as “The People’s House” for nothing. The Oval Office is meant for ceremonial purposes and should reflect the national and international importance of that room. Of course, the President should feel comfortable in the space, but he does have a private office as well. This is his public office and “We The People” are the owners of the space. All our Presidents are temporary inhabitants, there because a majority of those who voted gave them the permission to move in. And so I think it’s entirely appropriate that we all weigh in on how we’re represented to the world. And, it got me wondering, how does The Oval stack up to other heads of state around the world? (In all honesty, I thought this would be an easy post but it turned out to be more time consuming than expected. So I’ve only pulled pics of the seats of power of the French Presidents Office and the UK’s Prime Minister’s office.)

US: The White House 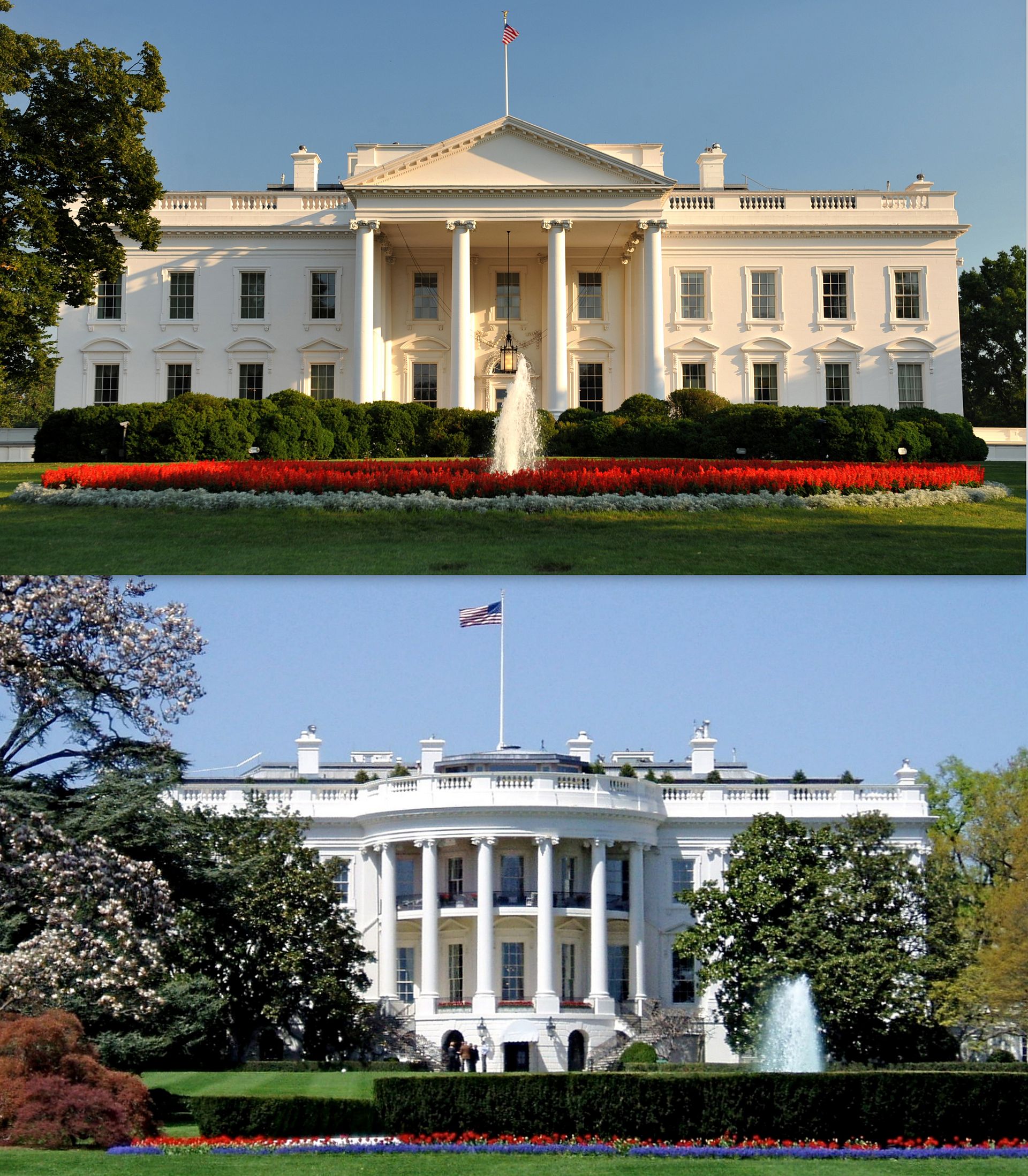 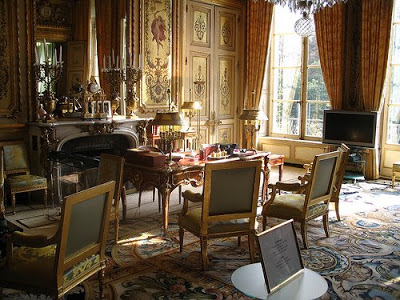 via Travels with Terry
Like The White House, The Élysée Palace (finished in 1722) consists of private living space as well as offices and formal public spaces. However, French Presidents seem to have made individual choices as to whether to live there. Mitterand preferred his own home on the Left Bank, Chirac did live in the Palace and Sarkozy apparently prefers to live at Carla Bruni’s home in Paris (according to Wikipedia).
Seats of Power United Kingdon: 10 Downing Street 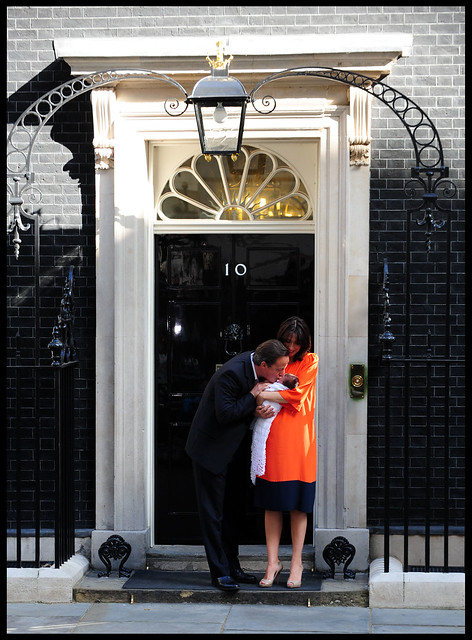 via Conservative Party on Flickr
PM David Cameron and his wife Samantha welcome their new daughter Florence home to the iconic front door at 10 Downing, today! 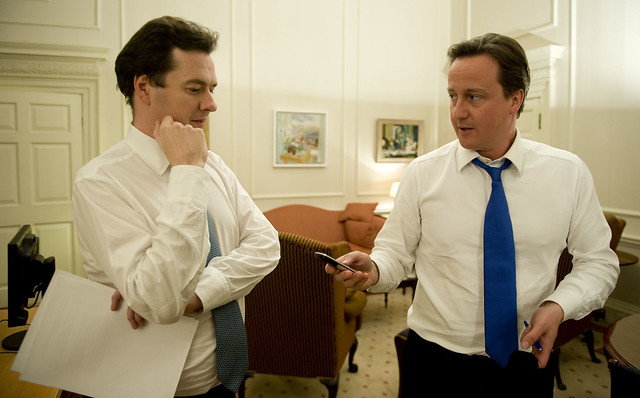 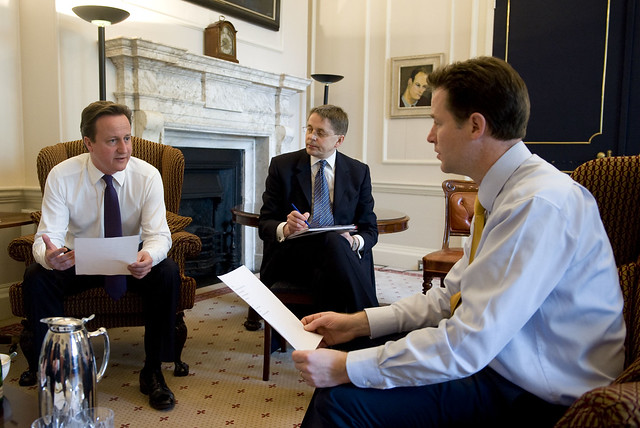 10 Downing Street was once a private residence and is a fairly congested section of London. The famous black door entrance is relatively unassuming as compared to The White House or The Élysée Palace. The rear of the building is much bigger looking and is the true entrance.  The Prime Minister’s and their families do live in the building, which Margaret Thatcher referred to as “living above the shop”.
I think the differing design styles of the three seats of power spaces is pretty obvious and expected. All showcase their own countries decorative arts and architecture. France is bolded and gilded to the extreme, England is classic and conservative; and the US is certainly classic, but still a bit of a mish-mosh. One thing I’ve realized that our Oval could use – large and bold artwork, or groupings of smaller pieces. The small scale of the artwork on the Oval’s walls just seems skimpy compared to the sumptuous detailing of France, or ancestral portraiture of England.
You might also enjoy:
Designing History by Michael S. Smith

7 thoughts on “Decorating the Seats of Power”