I spent last week in Bermuda at the beautiful Fairmont Southampton Resort and wanted to share my thoughts about our stay. For clarity, this is NOT a paid review, I received no discounts or freebies (okay, I DID receive a couple of birthday sweeties!) in exchange for my thoughts here.

The first four images on this post are from the hotel’s website. Clearly, I couldn’t get an areal shot or a photo of the empty lobby. All but one of the remaining images are mine, however. This trip was a long planned extravaganza for four of my closest girl friends whom I grew up with. I guess it’s fairly unusual for a group of friends that go back to elementary school to still be close when we hit our mid-C mark; we know we’re blessed. We started talking about a spa retreat vacation ten years ago, so we were very ready for a first class experience. And, for the most part, we received it.

A decorator is never really on vacation and we do like to evaluate our surroundings. The lobby of the hotel is very beautiful and for a busy, well used space, it’s in great condition. A few things are different now than when the above pic was taken, in particular they no longer have the little settees flanking the round table. And, as a matter of fact, the one critique I’d have of the lobby is that there were few places for more than one person to sit down together. There were several big comfy chairs on each of the four sides of the central stair, but they were placed as single chairs. It’s a small point, but pairs of chairs would be nice.

This wasn’t my room, but looks substantially the same. Since I was sharing, we had two beds. The bureau on the right which holds the tv was in fact a large mini-bar unit which held the coffee/tea service, fridge and other similar items. There was also a very comfy, swivel desk chair as well. The bathroom featured side by side sinks and plenty of room for two women to set out all our various toiletries. There was also a substantial walk-in closet with a tall bureau that served as a dressing room. All it needed was a bench to sit on (see, the decorator never stops!!!). 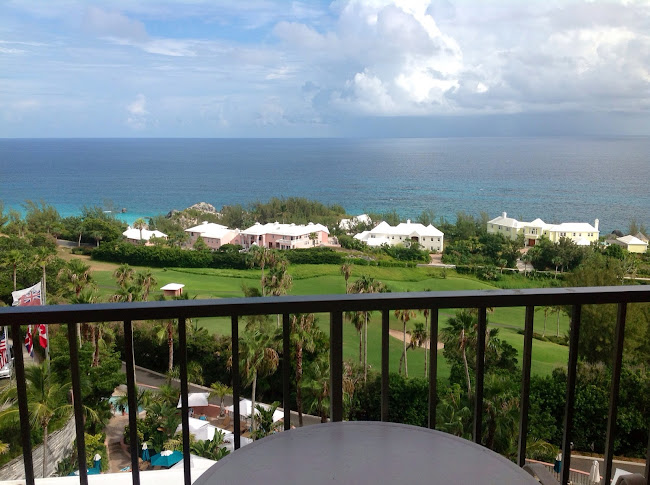 This was the view from my room – nice huh? We were on the 4th floor, having booked the full ocean view rooms. 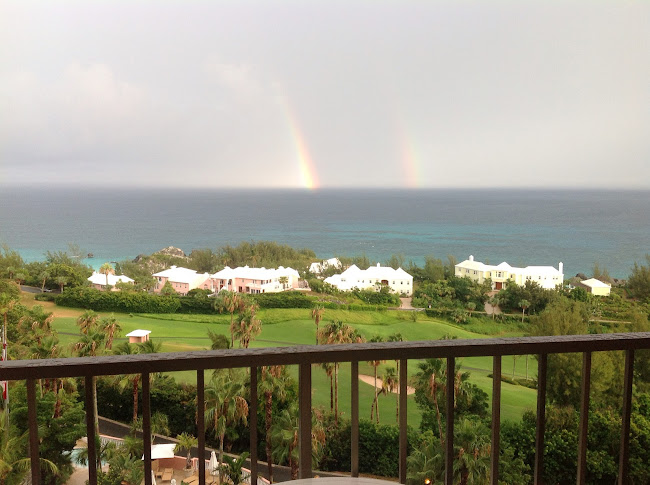 The weather reports before we arrived showed rainy weather was predicted and while we did have some rain it came and went very quickly.  One day we were treated to this amazing double rainbow. Speaking of treats, this lovely cake was delivered from the hotel manager upon arrival.  I’ll admit that I did pre-Tweet the hotel about our arrival and all about our joint birthday celebrations. Cake all around! 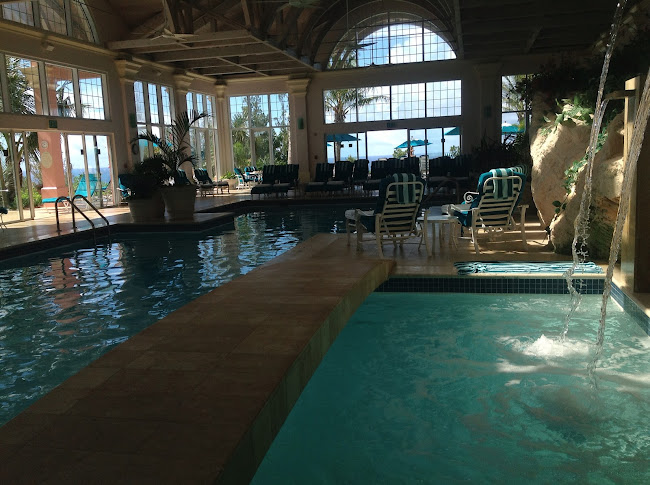 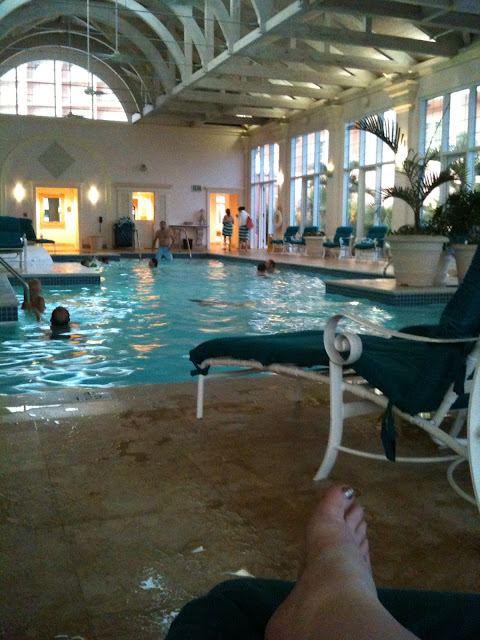 We took advantage of the hotel’s Pamper in Paradise package which included not only the rooms, but a spa service at the Willow Stream Spa and a dinner at the famous Waterlot Restaurant. The Spa is beautiful and includes a private indoor pool with outdoor balcony seating overlooking the ocean. The pool is private for those who pay and are 18 and over during day time hours and is open to all hotel guests after 6:30. 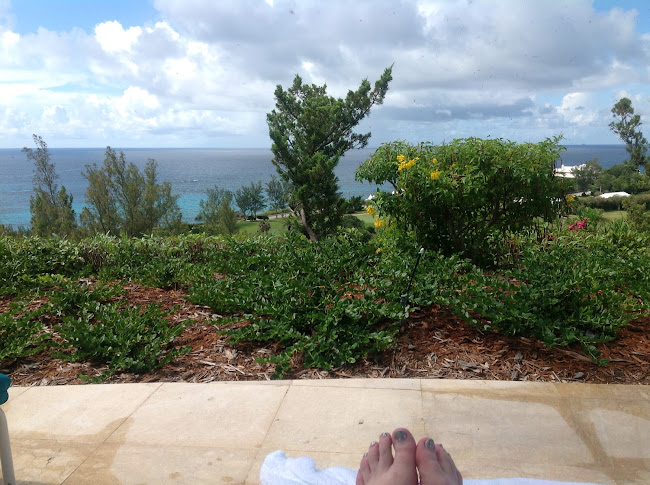 The view from the private patio overlooking the ocean… (sorry about my pre-pedi toes!) 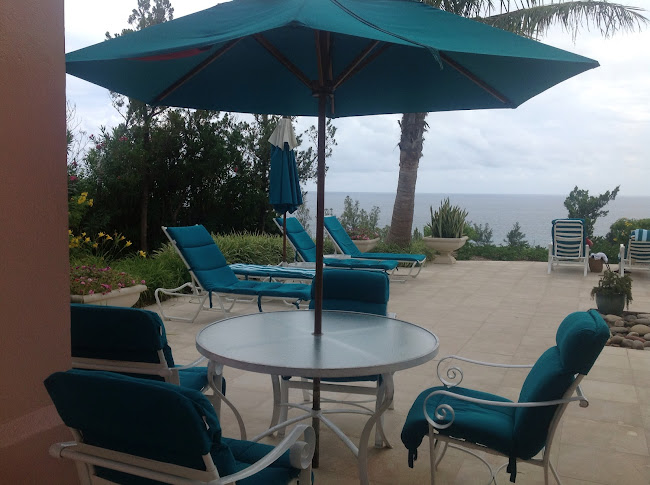 Lunch could be delivered right to the pool, which was divine after our spa services. 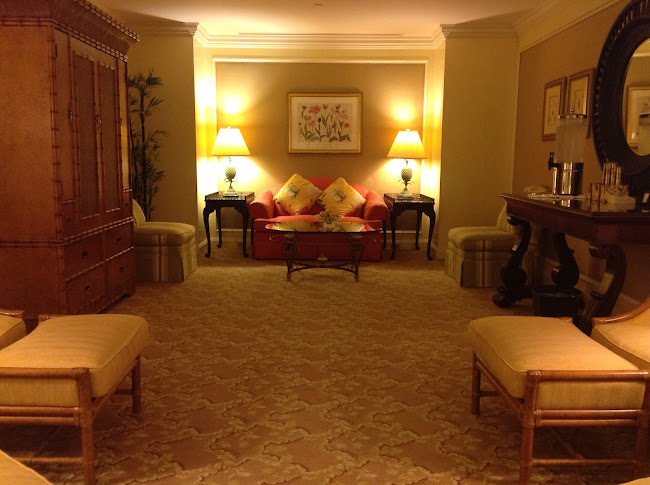 And this is the women’s private lounge. There is also a couple’s lounge for men. Apparently, there’s not much need for a men’s only lounge. I will say, they know how to cater to women’s tastes and sensibilities.

Unfortunately, there was a problem with the Spa that did dampen our spirits somewhat. Although the Willow Stream Spa is onsite, it’s apparently a separate entity from hotel and they basically serve as a vendor to the hotel. Based on our confirmations and the package description on the website, we understood that we had unlimited access to the entire Spa, not just the workout room and pool after 6:30pm. However, when we tried to enter the spa on our first day, the ladies at the desk were completely unaware of the package itself and what it contained. I had to run back to my room to get the written confirmation, which was fine. However, the written email confirm specified The Willow Stream Spa Fitness Facility, which they deemed to be only the workout room, not the sauna’s, changing room, showers or pool. Hmm… Definitely not our understanding of the package. I wished I’d shown them the website page, because it makes it clear that it included unlimited access. To their credit, the ladies at the desk gave us access that day anyway and said they’d look into it. When we left in a couple of hours,  they confirmed we only had unlimited access on the day of our spa treatments, which was our third day.  As it turns out, on day two, we were so busy sight seeing, we’d have never been able to use the Spa during the day, so it didn’t matter that much. However, all of us (three rooms housing five people) had problems with our bills upon checkout. All the spa services that were part of the package were billed to our rooms and the hotel’s front desk people seemed to have never heard of the Pamper in Paradise package. As we each checked out separately, we each had to go through the whole explanation to get the charges credited appropriately. One of our party was made to go down to the spa herself to see what they had to say (she was definitely NOT a happy camper about that). Needless to say, this was not a pleasant way to finish a very pleasant holiday. 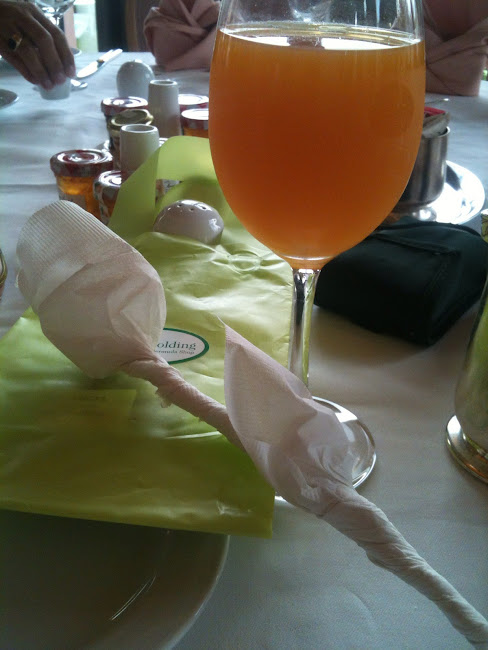 Onto happier moments. The hotel breakfast buffet at their Windows on the Sound restaurant was most excellent and there was no need to have lunch on any of the days we were there. The staff were wonderful, in particular Philip and Naomi(I think), who were super attentive and a whole lotta fun! On my birthday, my friends of course shared that fact with Philip as he was seating us. A few minutes later, he was standing next to me, twisting a plain white paper napkin into a lovely little present (see above). How cute is that? It didn’t make the journey home very well, but then neither would a real rose. 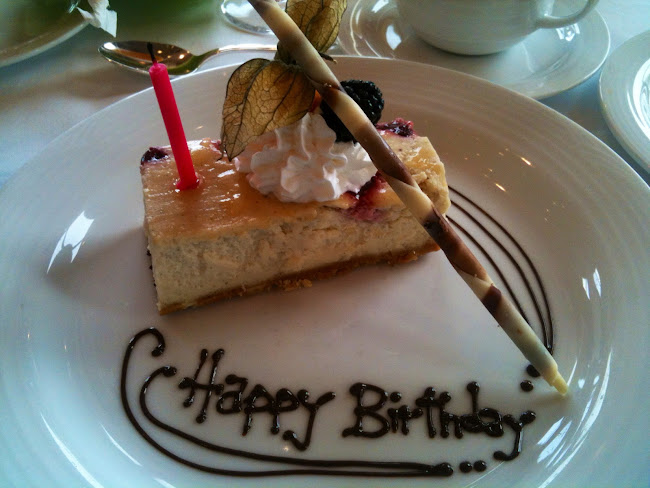 And, at the end of breakfast, I was treated to a birthday serenade by the waitstaff and the most delicious piece of cheesecake I’ve ever tasted. Unfortunately, we were all so full after breakfast we could barely eat more than a couple of bites.

As mentioned above, the package included dinner at the Waterlot Restaurant, which has been on Bermuda for 350 years! The pic above is from their website, but I believe this is actually our table, although the chairs are different. The Waterlot is known for its old-world style and steak! It was very delicious. The service was a tad spotty – for instance water glasses went unfilled, empty cocktail glasses were not removed when the wine was delivered, crumbs weren’t cleaned off the table cloth after the first course (ok, I am picking nits with that last one, I suppose…) We all felt that this was more a result of understaffing than actual inattentiveness. Like the Spa, the Waterlot is a vendor to the hotel and they were also unaware of the package details.  In fact, we were a little clueless as well and needed them to call the hotel to be sure that “dinner” really meant the entire dinner (excluding alcohol, of course). Another example of lack of information sharing between those who created the package deals and those who are on the ground. It was, however, an amazing 3-course meal and the best piece of steak I’ve ever eaten. A gentleman at the next table even sent us over a bottle of Champagne, which was fun. 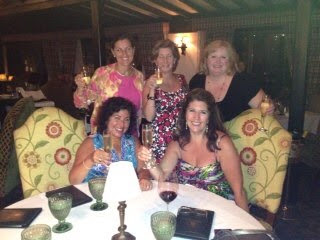 A tiny little iPhone pic of our wonderful evening. 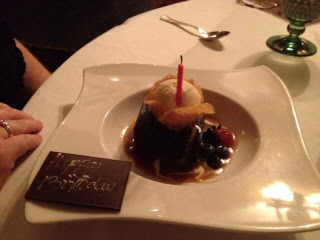 I ordered the Sticky Toffee Pudding and was again serenaded by the waitstaff for my day. (My diet started yesterday, btw). 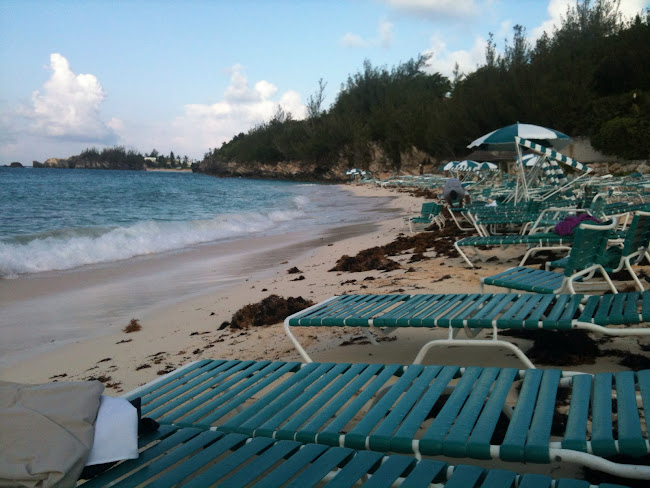 We went to the beach early on the last morning, which is an easy trolley bus ride from the hotel. The water was amazing, warm and bouyant. 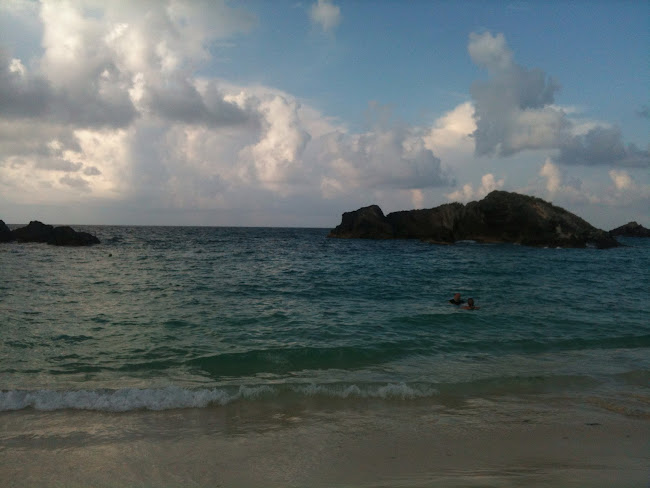 To sum up the hotel experience: The Fairmont Southampton excels at hospitality and needs work on logistics and the flow of information. However, I would highly recommend them and we all agreed we want need to go back. Just make sure to confirm any package deals ahead of time and don’t assume the right and left hands are in perfect communication. 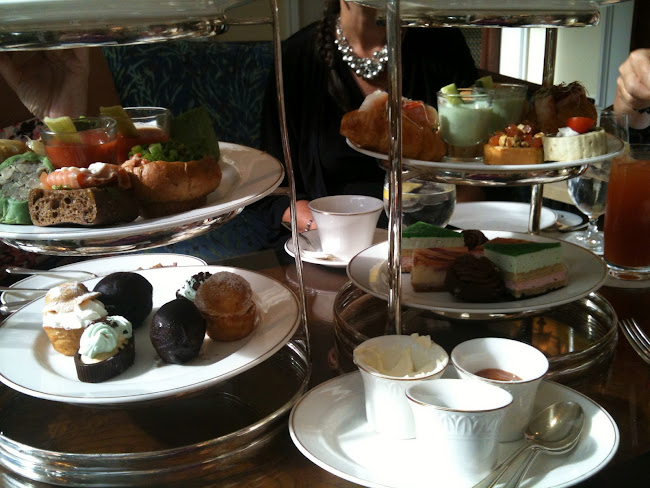 I also wanted to share the true highlight of our trip, which was Afternoon Tea at Heritage Court at the Fairmont Hamilton Princess hotel on the other side of the island. A ferry boat ride from one hotel to the other brought us right to the rear patio door of the Hamilton Princess. It was beastly hot and humid and I was nearly fainting, and definitely very irritable, by the time we got inside. But the blessed air conditioning, a long tall iced tea and the attentive services of Kiawana (?) (Kiwi for short), not to mention some amazing tasty treats refreshed and revived me. The private view from our seats over looking the coy pond. It was raining while we were there, but that made it feel all the more Englishy. 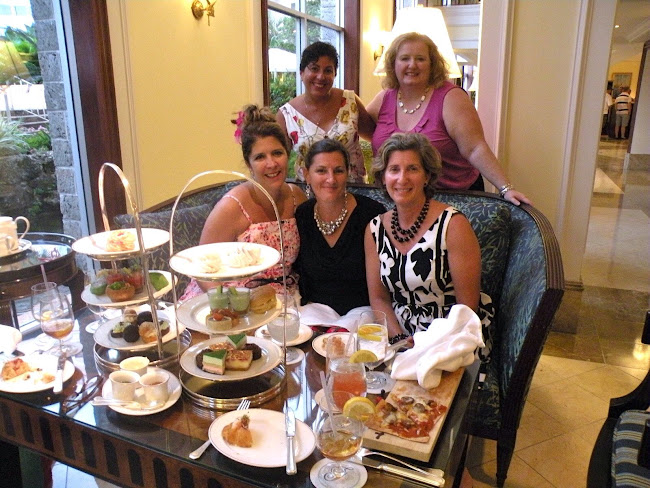 Me with my girls. And yes, there was little left but crumbs at the end of our two+ hour tea party. Quality time with my besties. Priceless.