I was happy to have the chance yesterday to visit the Junior League of Boston Designer Show House during press hours. This is the 35th showhouse since 1971 and the first in the last few years. I’d seen the house during the designer’s preview, aka “The Before”, and the “After” is really fantastic. Over 30 areas in the beautiful Mansard Victorian house in Newton have been transformed by some of New England’s top designers and I wanted to share some of my favorite people and spaces. I can promise, my photos do not do justice to these beautiful spaces. 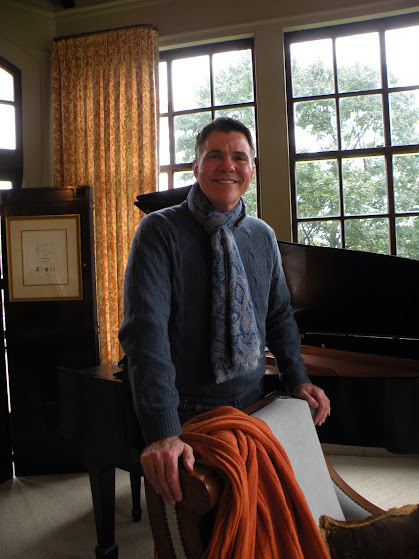 Gerald Pomeroy decorated one of my favorite spaces, the Conservatory, in a warm and embracing color palette with cozy furnishings and beautiful lighting and accessories. You just want to curl up on the sofa with a good book and a glass of wine. 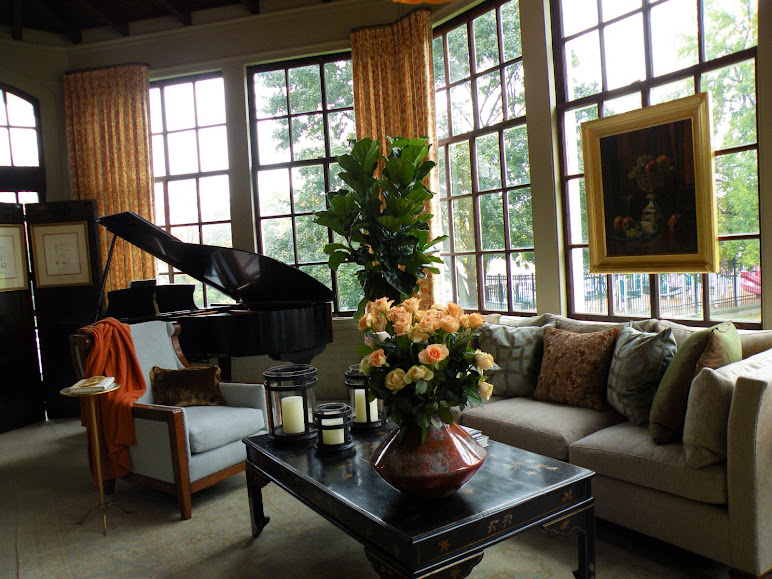 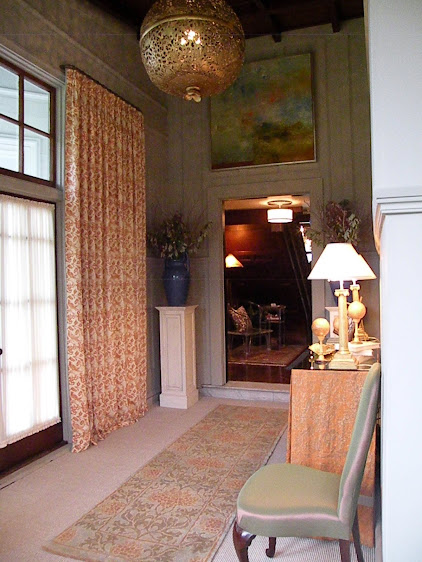 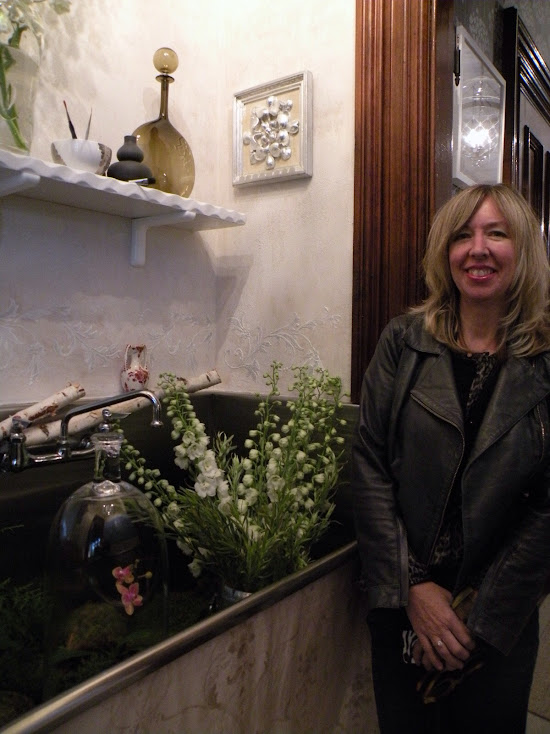 Marilyn MacLeod is a designer and decorative painter and has created a charming space called La Petite Fleur, which she’s filled with examples of her decorative handiwork including a painted mural, painting on the silk skirting and a faux marble stool. 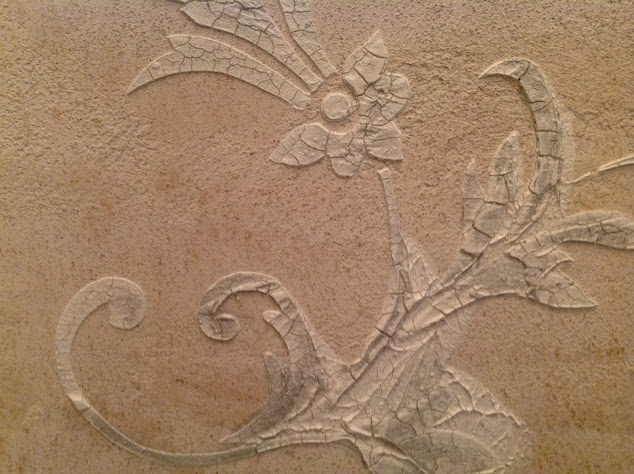 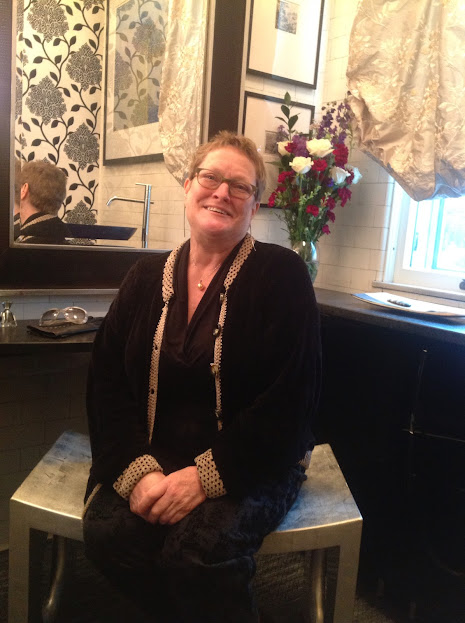 Kris Shaffer has created an elegant and sophisticated “Ladies Room (Gentleman Welcome)” that features the original (to the house) subway tile, luxurious silk window treatment and a leathered granite countertop. 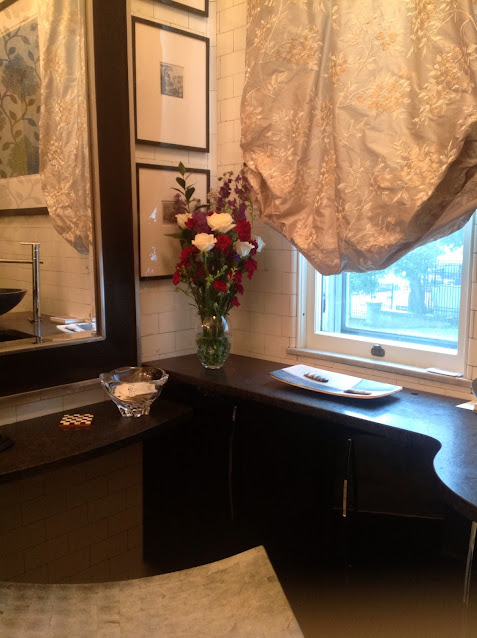 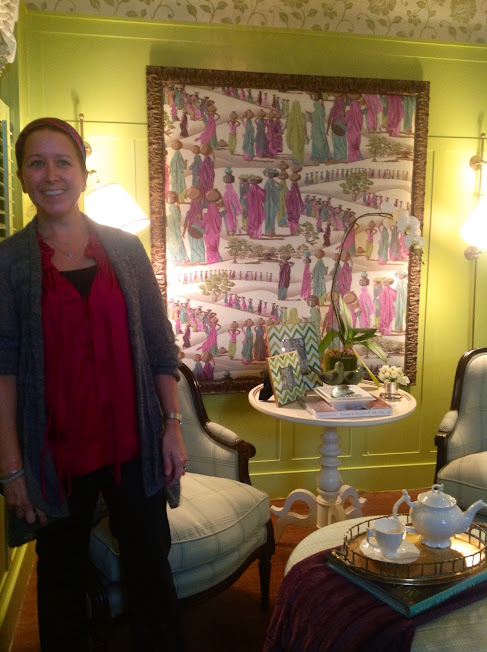 Elizabeth Benedict has created a lovely “Green Room” sitting room off the kitchen. An inviting space for relaxing that truly brings the outside in. 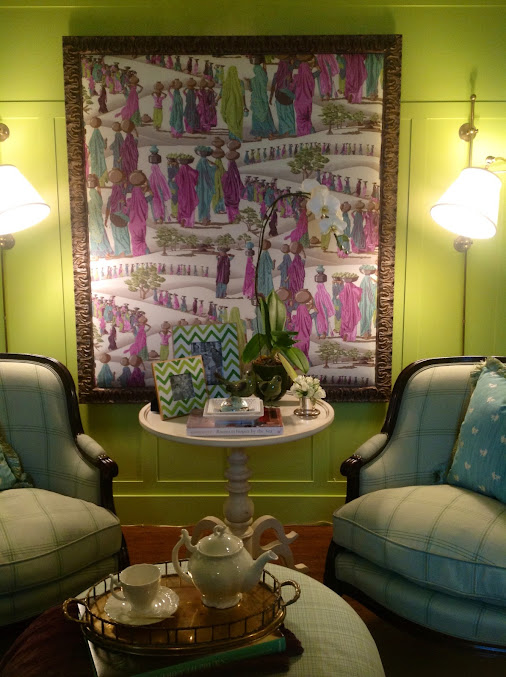 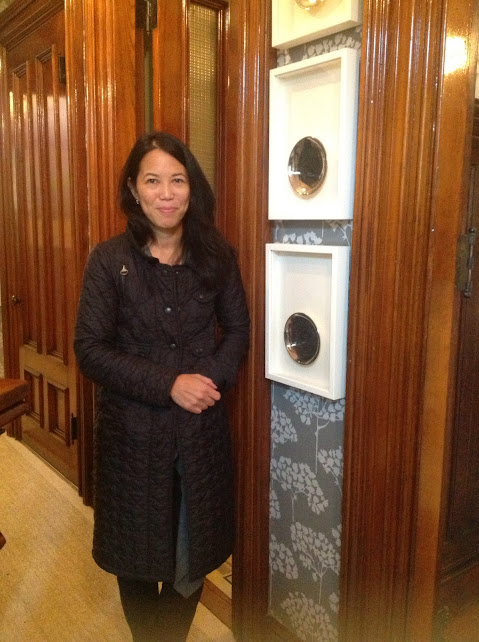 Celelia Walker was tasked with designing the difficult space of the Back Entance and Hallway. She’s done a lovely job of showcasing the beautiful woodwork by putting together a collection of three coordinating wallpapers and adding historical prints that make a small space special. 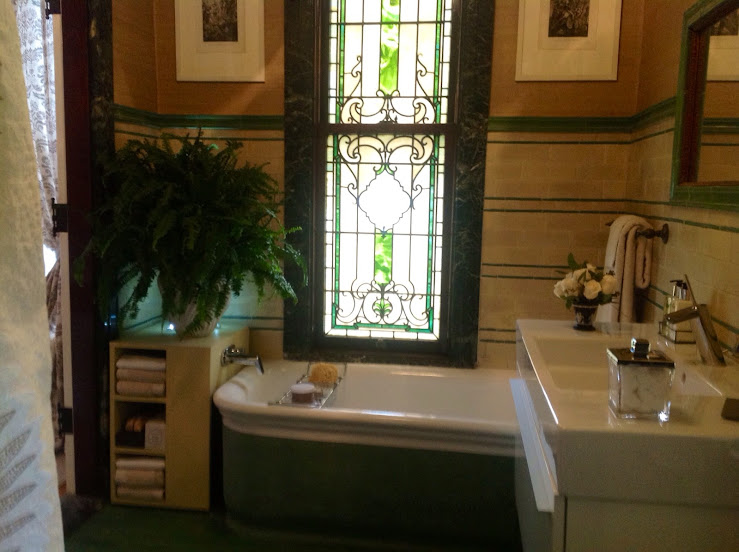 In addition to the Conservatory, I also loved this small bathroom on the second floor. The original tiling and spectacular stained glass windows make this space a real standout, even before designer Janet Tosi Marena worked her magic. Her careful selection of modern pieces – such as a spectacular modern murano glass chandelier (don’t forget to look up!). 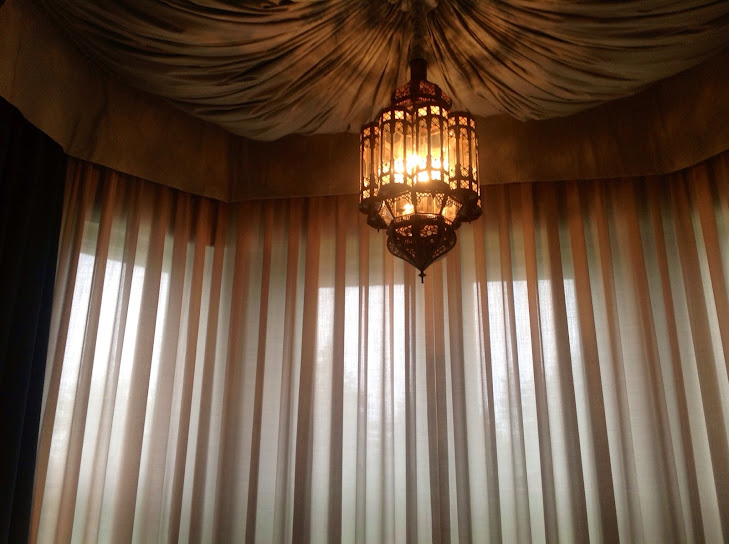 Designer Kristen Rivoli pulled together a magnificently romantic and sultry second floor master bedroom that features a gorgeous canopy bed. My sincere apologies to Kristen, her team and Paul Brown, Inc., for this terrible photo. My camera skills (okay, my iPad!) were not up to the task of capturing how great this room is! 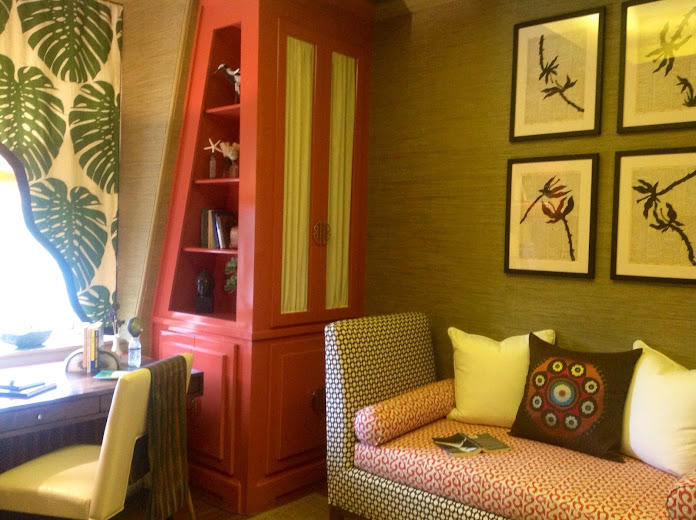 Designer Laurie Gorelick created a modern and yet still cozy woman’s “Inner Sanctum” space that features a fabulous mix of pattern and color and design triumph in the built-ins. (Note the sloped walls). 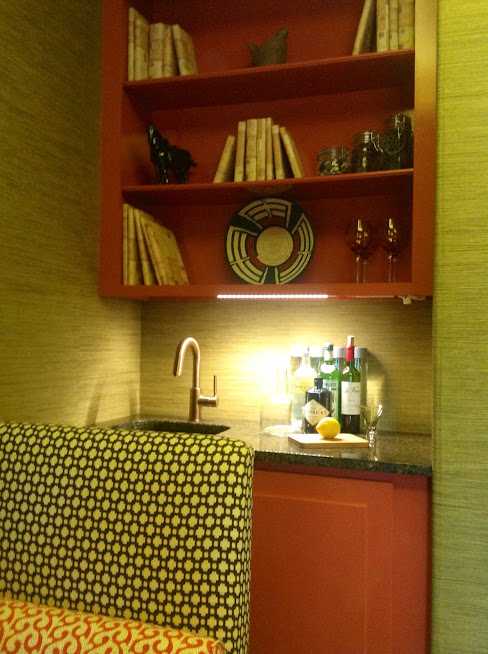 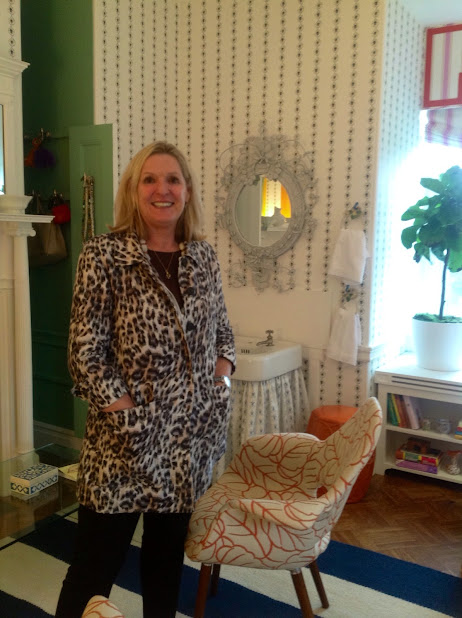 Textile and interior designer Mally Skok created a fabulous “Young Woman’s” bedroom that highlights her beautiful collection of fabrics and wallpapers. Bright and light, this bedroom is a happy place to be on a dark and rainy day. 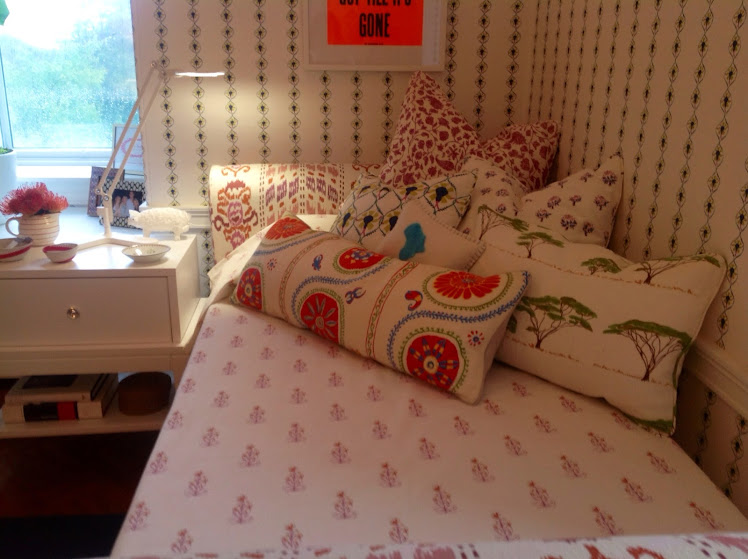 The Junior League of Boston is an organization of women committed to promoting volunteerism, developing the potential of women, and improving communities through the effective action and leadership of trained volunteers. The JLB invests approximately $195,000 in community projects annually. The Boston Showhouse helps raise funds for this work.

Buy your tickets here. The show house opens on October 16th and runs through November 18th.