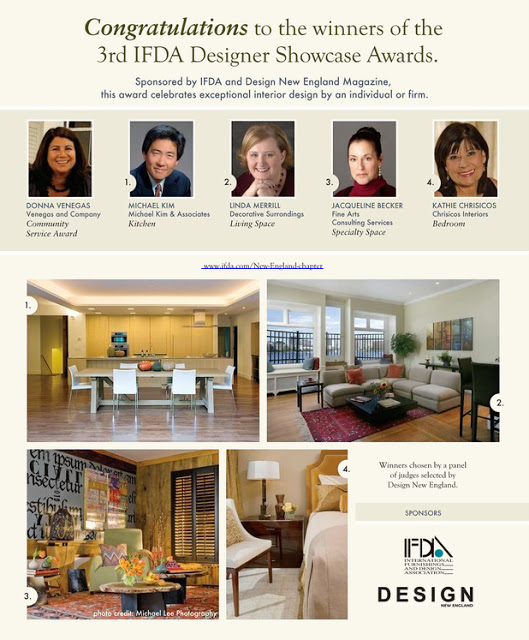 I’m thrilled and honored to share that last evening, I won the IFDA New England Designer 2012 Showcase Award for Best Living Space! My award winning design was a crisp and clean penthouse condo that overlooked the Charles River on Beacon Street in Boston. A huge thanks to Design New England magazine who was media sponsor for this event and who, under the guidance of editor-in-chief Gail Ravgiala, convened a panel of esteemed judges to adjudicate the over 50 submissions across 5 categories: Living Space, Bedroom, Kitchen/Bath, Specialty Space, and Community Service award.

Here is my award winning space!

Here was my written submission:

“This Back Bay Penthouse was a gut rehab project for a single man. The 800 sq. ft. condo consisted of one bedroom, a small closed-off kitchen, several closets and a living room overlooking the Charles River. The space had not been updated in many years. The homeowner wished to open up several walls to create a single airy large living space incorporating the kitchen and creating a small dining area where there once was an oversize closet. By opening the walls and kitchen to the living room, the small space immediately felt much larger than its square footage suggested and drew all attention to the spectacular view of the Charles River.

While the client’s personal style calls for simple lines, plain surfaces and contemporary furnishings we wanted to retain as much of the original material as possible to remain true to the history of neighborhood. This included retaining as much original flooring as possible and replicating the existing molding. There  were many issues with the local zoning board and condo association throughout the process on what could be done and not done both inside and out which turned this into a much more complicated project than originally intended. The outcome was a comfortable and modern space that was very functional and served all the needs of the client. ”

ETA: Here is the judges statement regarding my winning space, plus the “before” pictures:

By
enclosing the radiators, the designer created window seats and
transformed a dated bank of windows into the highlight of the room. The
white woodwork and soft color of the walls and furnishings give the room
a fresh appeal. Trimming the dropped ceiling with moulding is a smart
way of defining the new kitchen, where dark cabinetry offers a contrast
that draws the eye.