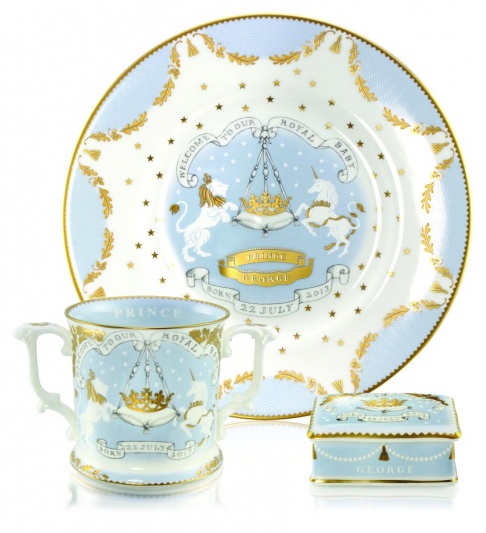 Royal Collection Trust has produced the official range of china to
celebrate the birth of His Royal Highness Prince George of Cambridge. The exclusively designed commemorative china is decorated with TRH
The Duke and Duchess of Cambridge’s coronet, supported by the unicorn
and lion, which are featured on the Royal Arms.  Oak leaves, taken from
the Middleton coat of arms, surround the coronet.  The chinaware designs
will also include gold-edged scrolls bearing the full name and birth
date of HRH Prince George of Cambridge.

The official china range is made in Stoke-on-Trent by the same
potteries that produced the official range of china celebrating the
marriage of TRH The Duke and Duchess of Cambridge in 2011.  More
recently, the potteries have produced the commemorative china to mark
the Diamond Jubilee and the 60th anniversary of The Queen’s Coronation.
Using techniques that have remained unchanged for more than two
centuries, every item is hand-made from fine bone china and gilded in
22-carat gold before being gift-wrapped in tissue paper and boxes
designed especially for the occasion.

I’ve not done any posting on the royal birth yet, but thought this is a really sweet collection and I love the description of the design. I’m not sure I would purchase anything if I were visiting, but I’m sure many will and it appears the royal baby souvenir booklet is already sold out.

I’m always amazed when people (American’s and other non-Brits) start yipping about the the royal family being an outdated institution and that they are really just living off the dole. Firstly because I don’t think it’s anyone’s place to tell another country how to run itself, but mostly because of the money the British monarchy brings into the country. I think I read they receive somewhere between 50-80 Million Pounds annually. However, I also heard that it’s estimated that wee Prince Georgie alone will bring in over 200 million Pounds in revenue fairly quickly in terms of tourist dollars and souvenirs. And who benefits from tourist dollars and sales of tchotchkes? Regular working people in hotels, restaurants, shops, cabbies, etc. Okay, off the soapbox now!