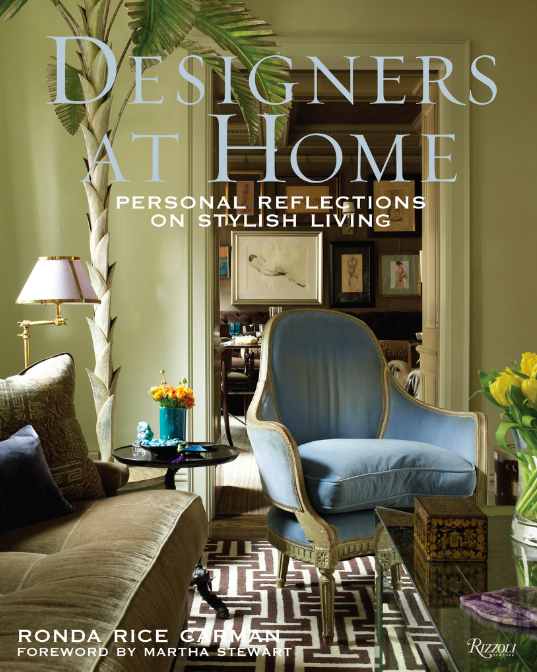 I’ve been remiss by not posting about © Designers At Home by Ronda Rice Carman (Rizzoli, New York, 2013) which came out a couple of months ago. Ronda’s blog All the Best has been her jumping off point into the world of interior design for many years. Over that time, she has forged deep and clearly personal friendships with some of today’s biggest design stars in the US and UK. Though based on Scotland, Ronda (an American) has had her finger on the pulse of the American interior design world like no one else and she was really the only one who could write a book about how designers live in their own homes. The book’s tag line is: “Personal Reflections on Stylish Living” and over the course of 300 pages, we get inside glimpses of some of our favorite interior designers. As a blogger and member of the design industry, I’ve had the opportunity to connect and meet many of the people profiled in the book, so it’s been especially fun to see how they decorate their own homes and their individual thoughts on design. Each designer provided their thoughts on the following five topics:
– Making an Entrance
– Creature Comforts
– Flowers and Fragrances
– A Beautiful Bed
– Entertaining Thoughts
And in typical fashion, each designer has his/her own take on each. With a forward by Martha Stewart, the book features the homes of fifty professionals (sometimes more than one house) including Barry Dixon, Brad Ford, Brook and Steve Giannetti, Celerie Kemble, Mary McDonald, Scot Meacham Wood, Bunny Williams, Charlotte Moss and many, many more.
Aside from being able to go inside our favorite designer’s homes, the range of the design styles is broad as is the geographic regions they cover, which is a lot of fun. Overall, the rooms shown range from traditional to eclectic, casual to formal, with no truly modern design shown (which will certainly be a downside for some). One criticism I have is that for the designer’s who show more than one house, the photos aren’t marked as to which house each is from.  Maybe I’m lazy, but I’d rather the photo be marked than have to figure it out based on context of the text, or foliage outside the windows. But that’s a very small criticism.
The size of the book is notable in that it’s smaller and lighter than the average “coffee table” design book and as a result is easy to handle and read. While the photos may be smaller than some of the larger, glossier tomes on the market, I found this size much easier to deal with and more likely to be read entirely through.
So, a big congrats to Ronda – this is an amazing accomplishment! Ronda has been touring the US all summer doing book signings, which are noted on her blog.

You can buy Designers at Home: Personal Reflections on Stylish Living