Currently on the market is this traditional New England style home designed in 1978 by the famous New England Architecture firm of Royal Barry Wills Associates, Inc.. I’ll share at the end of the post where this house is located – as I said, it’s a surprising location for such a quintessential New England style. 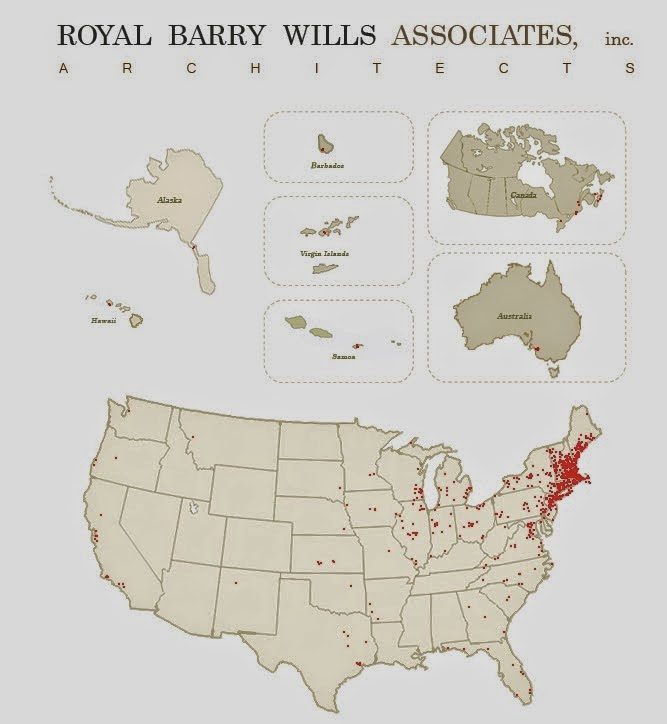 From the map on their website, it’s clear that the majority of their work is in the Northeast, with a smattering of locations around the country and other parts of the English speaking world. I wonder if the Australia and Virgin Islands locations are American’s abroad looking for a feeling of home, or just fans of the style.  RBW has been designing houses since the 1920’s and not all the early houses were in the classic New England vernacular – some were quite modern and other’s very European storybook looking. Check out their chronology of houses here.  From the start, RBW was sought after for his classic and simple homes, many of which featured classic 1-1/2 story Cape Cod style.

Interestingly and incorrectly, the real estate listing and the news story which features this mystery location house I am featuring here as a Cape Cod style house – which it’s not, it’s a classic symmetrical center entrance Georgian style (1700-1780).

Cape Cod style houses were always small, with single story fronts. Below is a row of period Cape homes that are on a main street here on Cape Cod – I took this photos a couple of years ago and featured it in my White Houses of Cape Cod blog post – one of the most viewed posts I’ve done due to web searches for Cape Houses and White Houses. Cape Cod style houses feature both center and side front doors, with chimney’s that run up the center of the house. Historic New England has a wonderful guide to architectural styles here.

When I first saw this house listing, I wondered if the interiors would match the classic New England exterior, or would it be done in the well-known style of its location (to be revealed later).

I was happy to see that the insides do indeed match the outsides – though the decor is probably a little “too” for my personal taste. I wouldn’t mind a little mixing of styles and periods. The classic front entrance features pine floors and a simple staircase. I’d have loved to see some rugs here – a jaunty stripe on the stairs possibly.

The formal living room features beautiful paneling, made by Cliftondale Woodworkers of Saugus, Massachusetts (the story says Maine, but I’m pretty sure that it’s MA). The furniture seems to be a bit dated – possibly it as last done in the early ’90’s. The rug, however, is the perfect worn looking oriental. New Englander’s are known for keeping things till totally threadbare, so this fits right in!

The library’s paneling and bookshelves are painted in Williamsburg Red.

The formal dining room features a fireplace and simple chair rail and wainscot.

By today’s standards, this is a pretty small kitchen area, but I like it. The brick floor continues the (Williamsburg) red color theme into the space, which also has gray/blue cabinets in a simple flat panel design. I would have liked the beams to be a little wider and maybe a little less refined looking. It’s funny, this color scheme is identical to my parent’s open concept kitchen and family room – with the blue wood working, red brick accents and colonial styling including Windsor chairs, blue checked sofa and worn oriental rugs.

The large master bedroom features tongue and groove floors and more beautiful panel work. I like the collections of books in the window seats and the angled walls flanking the fireplace.

This shared bathroom (aka Jack and Jill) is dated and could definitely benefit from an update.

This is one of the bedrooms off the bathroom. I like that there’s a little more color in here than we see in the other bedrooms.

The house is listed at over 5,000 sq. ft. – which doesn’t look possible given the interiors we’ve seen – but must include out-buildings and the “wings”.

The prevalence of outdoor seating areas is a real tip-off that we’re not in New England here! Not that we don’t have outdoor spaces, but our season is so short they aren’t as common as other area’s of the country.

So, any idea where in the US this house is situated?

When I started looking at the photos, I wondered if the interiors would be traditional to the architecture, or showcase the very different style known as the Houston style, as showcased on my friend Joni Webb’s blog Cote de Texas. Yes, this New England style house is located at 11030 Greenbay Street in Houston, Texas. It’s on the market for $3.5Million – you can see the real estate listing here and there are several more photos of the house. All photos except my Cape Cod house photo are by TK Images.

So, what do you think? I have to wonder if they know the style isn’t “Cape Cod”, but feel it’s more evocative than “Georgian”, or that “Colonial” is mundane and “New England” style is too vague? Marketing is always a factor…