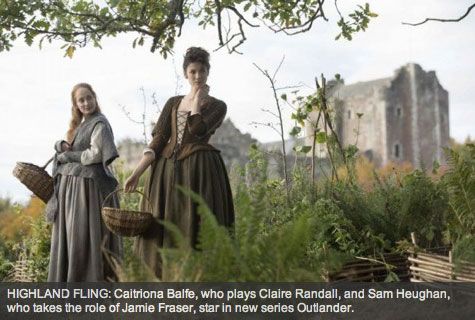 The premier episode of Outlander on Starz has finally aired and it was really, really good and very true to the book. By the end of the first episode, the protagonist Claire Beauchamp Randall has “fallen through time” leaving behind her 20th century husband to wonder what happened to her and falling into the midst of a firefight between British “Red Coat” soldiers and Scottish Highlanders. She initially thinks it’s some kind of costume drama being shot for the movies, until she realizes that they are using live ammunition. She is assaulted, nearly raped, shot at, knocked out and then kidnapped by a band of disreputable looking Highlanders who are mostly speaking their native Gaelic. The Gaelic isn’t translated for the viewing audience under the theory that we always see things through Claire’s eyes and since she doesn’t “have the Gaelic” then neither should we. She comes to realize that somehow, unbelievable as it may be, she’s no longer in the 20th century and she would do well not to let on to her kidnappers (or rescuers depending on how you look at it) much about herself. Having served as a war combat nurse in WW2, she has medical skills and knowledge that far outstrips anything known in the past and can’t help but step in to help out one of the Highlander’s who is injured with a dislocated shoulder, among other troubles. She starts ordering the men about (not something they are used to) and gets to work and fixes the problem, earning a level of respect mingled with suspicion among the men. The last scene shows the band of travelers with their unwilling captive arriving at Castle Leoch, the seat of the Clan MacKenzie.  Two days before (and two hundred years in the future), Claire had visited the ruins of the castle with her 20th century husband Frank. And now she rides up on a horse to a living, breathing, if still foreboding, structure. Standing in for the fictional Castle Leoch (roughly pronounced Lee-ock) is Doune Castle which is in the Stirling region of Scotland. Only the exteriors of the castle are being used for filming. The interiors are entirely shot on a custom built sound stage in Cumbernauld, Scotland, which is outside of Glasgow. The Castle is a property of Historic Scotland. Doune Castle was built around 1400 by Robert Stewart, 1st Duke of Albany who ruled Scotland from 1388 to 1420 and is known as “Scotland’s uncrowned King”. It’s structure includes a large courtyard, 100ft high gatehouse, a Lord’s Hall with musician’s gallery. Before “Outlander”, “Monty Python and the Holy Grail” and some scenes in “Game of Thrones” were filmed here as well. While Doune Castle is busy being a tourist attraction and move set – one wonders if it will see the huge influx of cash that Highclere Castle in England has as a result of Downton Abbey – it’s clearly not a comfy, livable place. But, there are certainly other castles in the area that are very welcoming to the modern traveler.

Inverlochy Castle, in the Highlands, was built in 1863 on the site of the original 13th century structure. The castle is located in Fort William, which plays a prominent, though not happy, role in the “Outlander” story. Today, Inverlochy is an award winning hotel.

I imagine that Claire would have been much happier to have arrived at one of these beautiful, and comfortably outfitted, castles rather than Leoch, wouldn’t you?