This week’s installment of Starz TV’s production of Outlander brings us the famous “Gathering” of the Clan MacKenzie where all the men under laird Colum MacKenzie come to the castle to swear their oath of fidelity to him and to the clan (and to pay their rents and proceeds from the farms they tend). The event is filled with filial love and furor and a kind of patriotism, though not as much to the State as to the clan. Colum (subtly played by Gary Lewis) is the top guy, but he suffers from Toulouse-Lautrec syndrome and while he can walk, does so very slowly and is depicted as always being in great pain. (Gary Lewis as Colum ban Campbell MacKenzie)
The show is doing an excellent job of following closely to the original books, while adding in new scenes and details that feel like they could have truly been in the books. Bravo for that – especially when the audience is filled with rabid readers who recall every detail of the first book. The Oath Taking scene was particularly well done – filled with lots of spoken and unspoken drama an intrigue. Pictured above is Colum’s brother (and enforcer) Dougal MacKenzie, who is first to swear his oath of allegiance, which includes a promise to be killed by his knife if he ever commits treason. One of the things that is so nice about this series is that it didn’t go down the cliched path where the second son jealously plots and schemes to take the throne from his older brother. Dougal, while not the nicest guy in the world, is allied with his brother and wholly supports his position as Laird and leader of the clan. He’s also aware that his brother, due to his illness, won’t live a long life and he could be in a position to claim the title when the time comes. Except (and here’s where the intrigue comes in) that the lairdship is open to some kind of democratic vote where another family member could be chosen by the people.  Such as… Our hero Jaime, who is a nephew of Dougal and Colum on his mother’s side, and therefor a potential rival for the lairdship if he swears his oath to Colum and the clan MacKenzie, thus resigning his allegiance to his late father’s clan Fraser. Jaime knows that while Dougal is loyal to his brother Colum, he would not be loyal to anyone else, even a nephew, if his plans for the lairdship were thwarted. Anyway, lots of drama ensues, including our heroine Claire who is still trying to escape and is the cause of Jaime having to show up at the Hall when he would have preferred to stay out of the way.

Ok, so, drama, drama and more drama. They are really letting the chemistry between Jaime and Claire come to a boil very slowly – for television. I kind of like it. I’ve been listening to the podcasts done by showrunner Ronald Moore where he does a commentary on each episode (to be found on iTunes) and lets out some very interesting tidbits. Including the fact that the tapestries in Colum’s room (aka office) are actually paintings made to look like wall tapestries. From TVTango on the set decorating of the castle as a whole, and then on Colum’s private rooms:

“We wanted it to look like it has been in Colum’s family for hundreds of years, handed down through the generations. There’s very little furniture, it’s sparse basically benches, big tables, and lots of candles. It’s not a nice little cozy home. It’s a castle, with all of the drama that would happen in a castle.”One exception to the austerity of the Castle décor can be found in Laird MacKenzie’s room, where the walls are covered in tapestries that depict scenes of the Scottish landscapes. “His disability means Colum is a bit cocooned,” explains Set Decorator Gina Cromwell, who commissioned the wall hangings for the series. “The tapestries are pictures of forests and things he can’t get to anymore, so in way it’s his opportunity to experience the outdoors.” 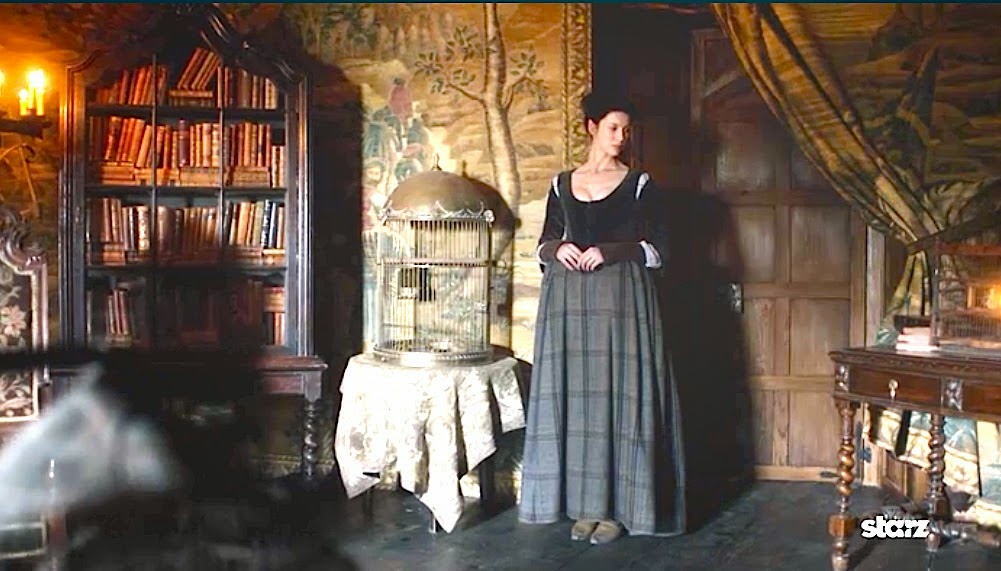 Obviously, it would have been prohibitively expensive to commission tapestries made for the set, so they created trompe l’eoil versions on canvas. 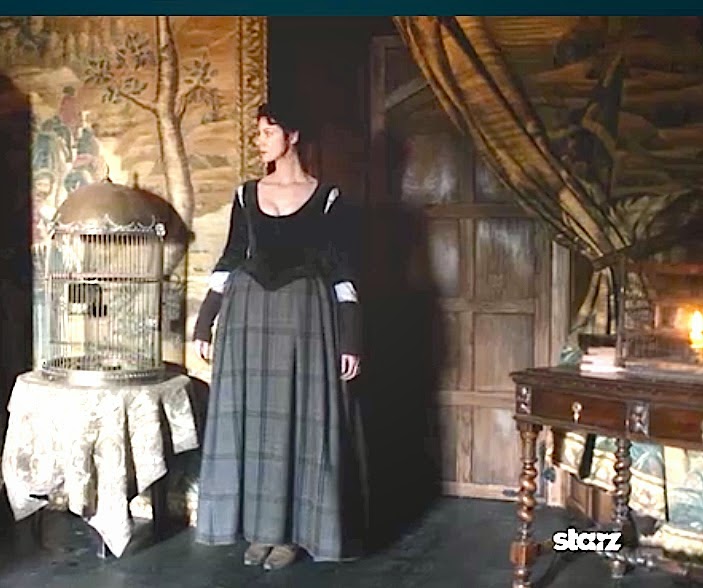 As we know, most European tapestries of the period, and before, were made in Belgium (then Flanders) and France. Any references I found to tapestries of the 15th/16th centuries were also from France and Belgium and there appears to be no local Scottish tradition of tapestry making. So, an entire room covered in tapestries such as this would be enormously expensive, speaking to the status of the MacKenzie clan (assuming the set decorator’s were going for historical authenticity.) 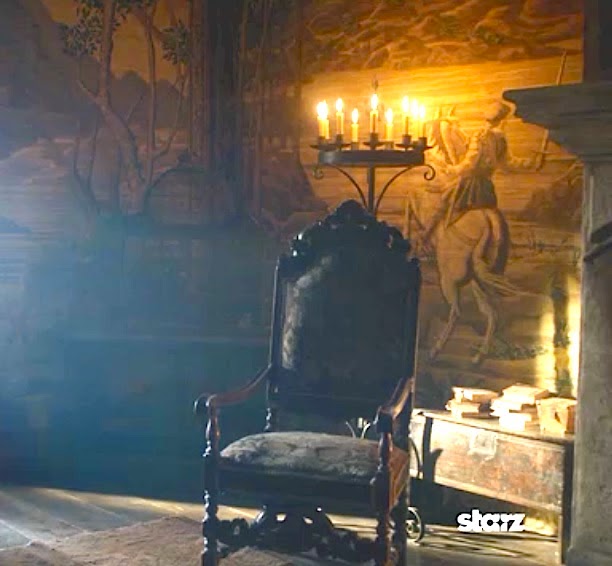 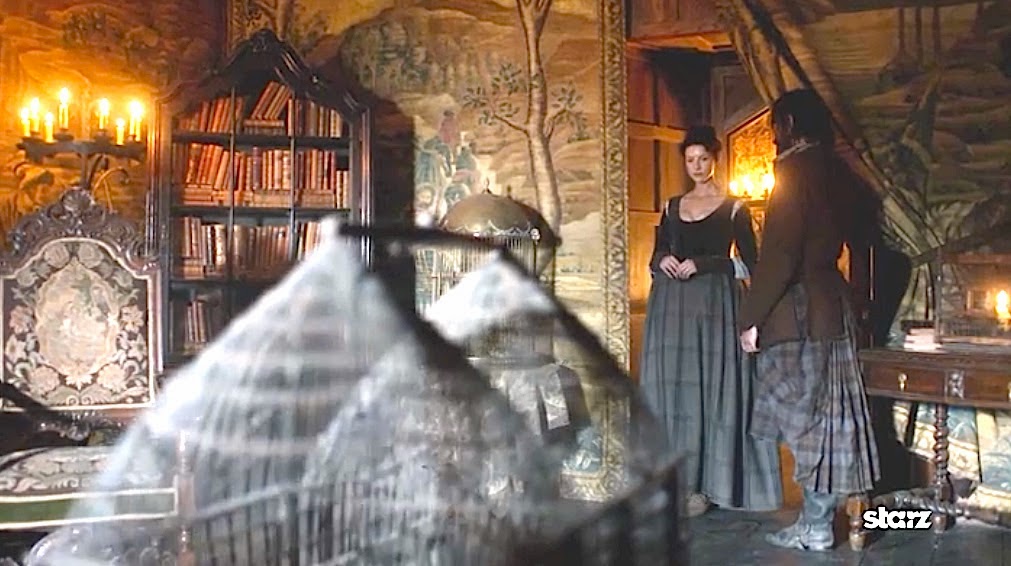 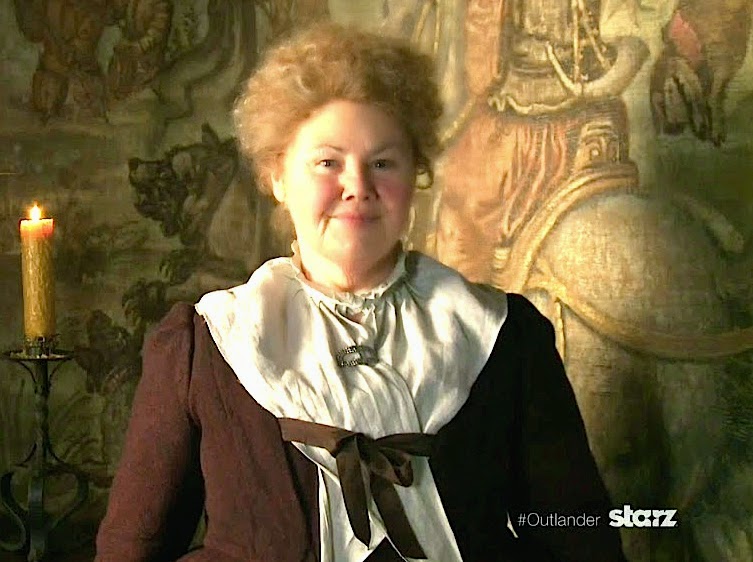 British actress Annette Badland as Mrs. FitzGibbons, Cook (and ring master) at Castle Leoch
In the stark, nearly bleakness of the rest of the Castle, Colum’s room is certainly a standout!
Have you been watching and what do you think of the series so far? I started re-reading the books in the Spring and am mid-way through #5 The Fiery Cross. I’d started that book several years ago, but never finished it. So, I’ve finally caught up with myself and plan to finish out the series by the end of the Fall. Book #8, In My Own Heart’s Blood was just released in June I think.
Meanwhile, as a followup to my Friday post on my gallery style art wall in my bedroom, here’s a sneak peek!