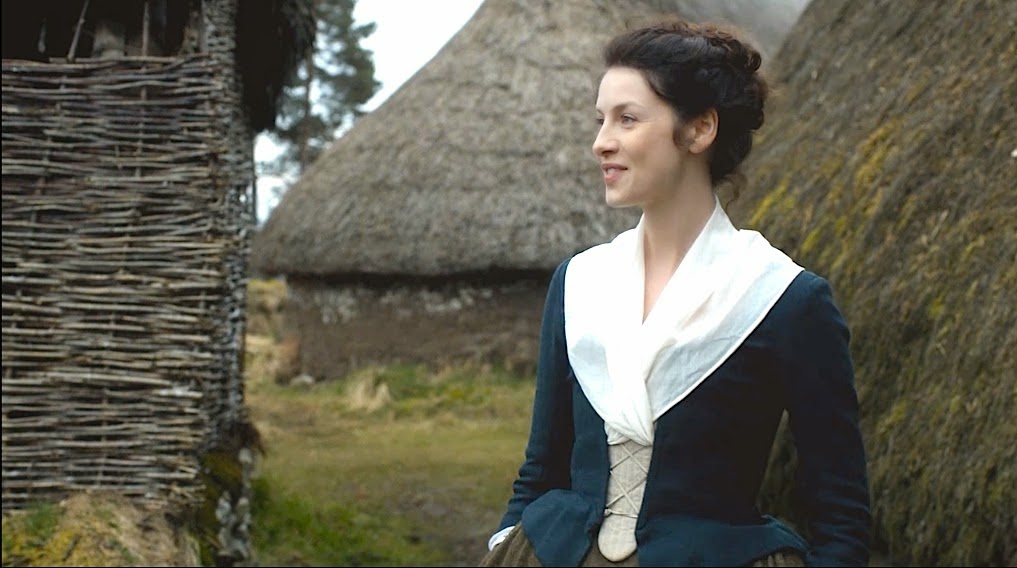 In this week’s Outlander The Rent episode, our heroine Claire is taken on the road with a pack of MacKenzie men to collect the rents from outlying tenant farmers who hadn’t been able to make it to The Gathering at Castle Leoch. War Chieftan Dougal figures it would be good to have a healer along and Claire sees it as an opportunity to get out of the castle and perhaps closer to the standing stones and maybe even back to the 20th century. 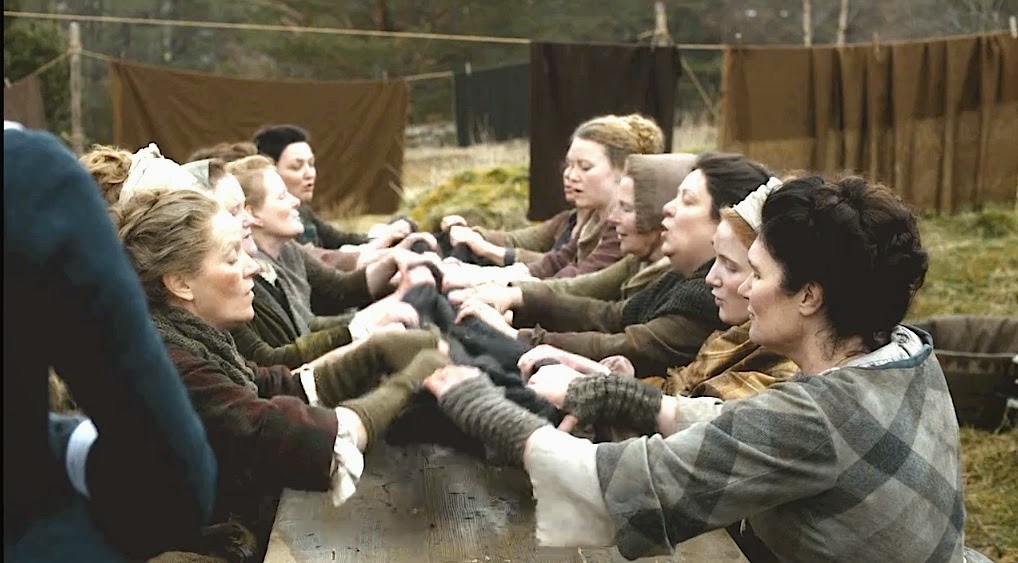 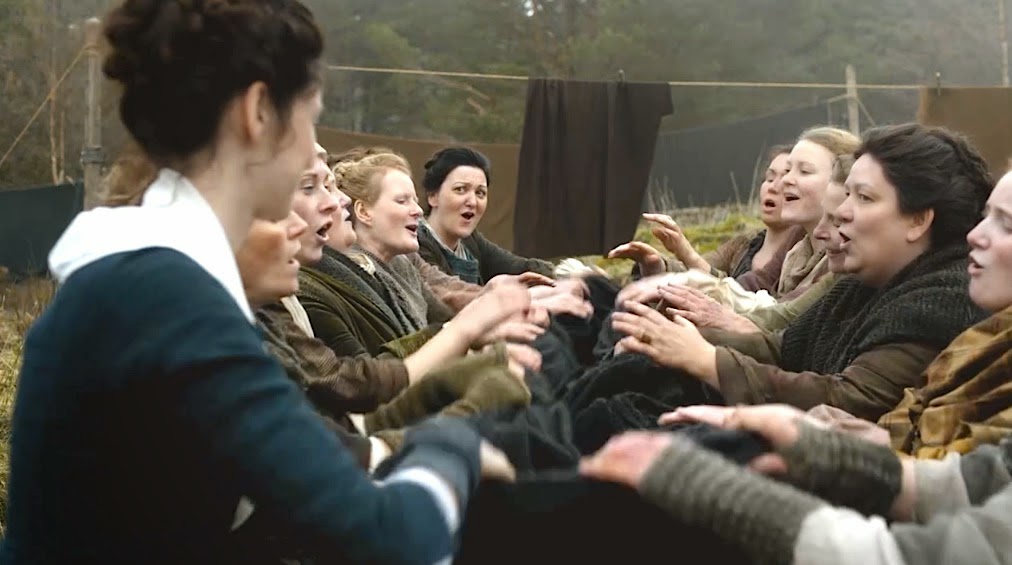 At one of the stops, Claire finds a group of women who are singing a working song which aids in the rhythm (and helps pass the time, no doubt) while they prepare a large piece of heavy wool for dyeing. Such preparation includes pounding hot urine into the fabric which helps it accept dyes, notably indigo colors, and sets the color quicker. (see more information on this process here).

Edited to add: I came across a blog Three if by Space who is reviewing the series. She clarifies that it’s called “waulking” the wool, not working, though they are probably related words. Anyway, she has a link to a video showing more modern woman doing the same thing with the wool and singing along with the series. Click here to view. 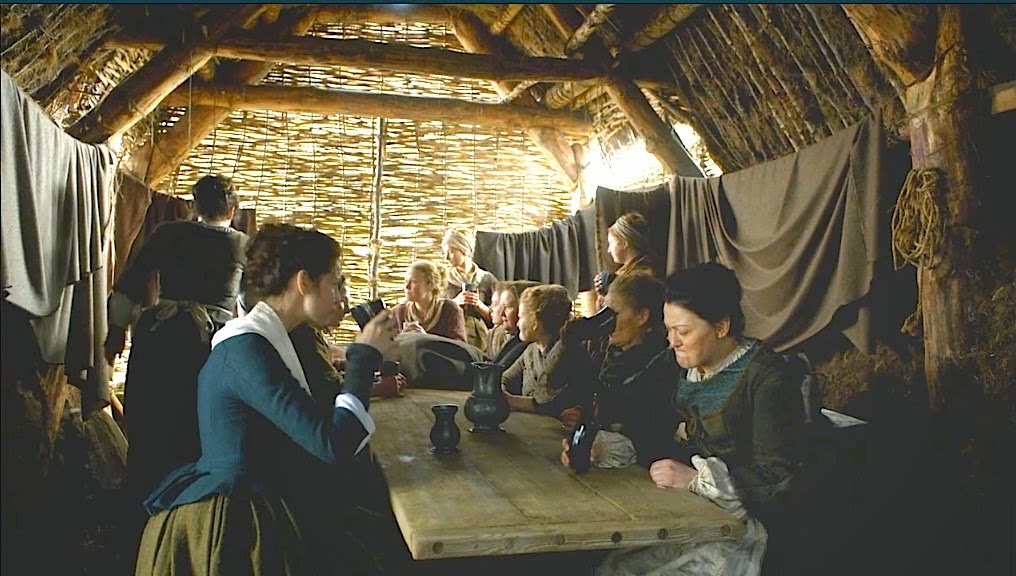 As this is an “on the road” episode, there aren’t too many interior scenes, with the singular exception of the straw wattle house where the ladies do much of their work – and relaxing.

Wattle and daub huts have been around for millennia. This is a wonderful brief video on how they are built. 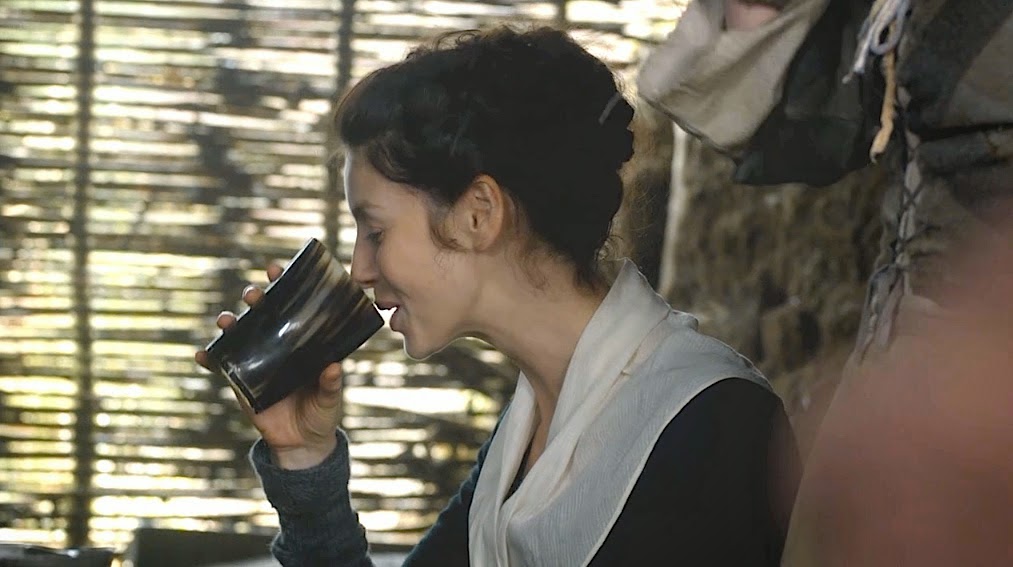 I thought it surprising that the hut used in the show still had open walls that have not been filled in with daub. The photo below shows the thatched roofs over more traditional wattle and daub structures on the right and middle, with the more open structure on the left.

I’m not sure if this is typical as my initial thought was that there would be no protection from the cold wind and rains in the Scottish Highlands, not to mention the wood would deteriorate very quickly. Plus, one errant spark from the fireplace or a candle and whoosh – there goes your romantic looking structure. To this day, wattle fences are still very popular and are certainly very pretty. Back to the Outlander set – I can’t help but wonder if they chose to leave the ends of the house walls open structure to let in more natural light for filming, or perhaps just for atmospherics? 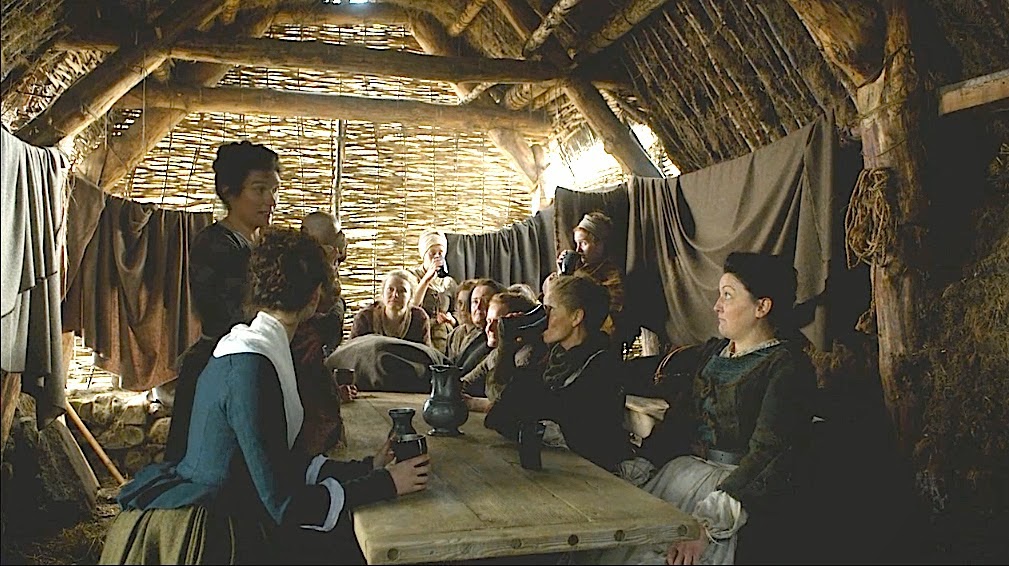 Meanwhile, that table looks like it’s straight out of the Restoration Hardware catalogue. 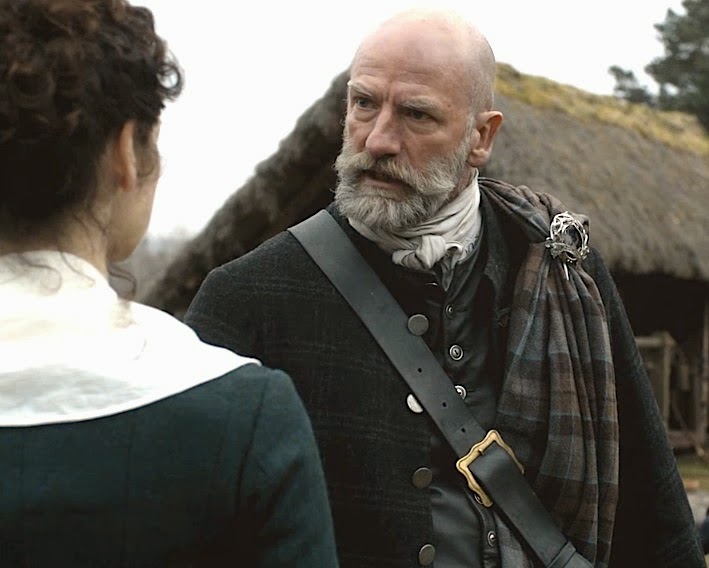 Claire and Dougal MacKenzie square off

One of the most brilliant (though sometimes also the most tedious) aspects of the books is the level of detail author Diana Gabaldon gets into, particularly the nastier parts of traveling “rough”, sleeping on the ground, wearing the same clothes day in and day out and little bathing.  Unfortunately, so far in the series, the producers aren’t ready for the star Caitroina Balfe to look quite so unkempt as all that and in this episode, she looks a little too clean and pressed through out  to be plausible. Recalling this part of the book, Claire basically had one dress which she wore day in and day out. Her wardrobe, supposedly cobbled together at the castle from discarded clothing,  looks brand new and perfectly fitted to her. More importantly, it never looks dirty, even after she’s pitched in  working the wool, which had to be a dirty, sweaty and messy task. Yet, her white scarf is as starched looking as it ever was. I would argue nothing kept in a traveling bag would be particularly pressed looking. Dougal, in the photo above payed by Graham MacTavis, is the second most important member of the Clan MacKenzie after his brother the Laird. On this trip, he was the man in charge, the boss and owner to whom all the crofters were paying their rents and asking for advice. His clothing would naturally be the best and most impressive among the men and yet he looks travel weary and his white neck cloth more appropriately grimy looking as compared to Claire’s. The harshness of the setting is all a part of what Claire faces and we’re not at all seeing that natural degradation brought on by lack of soap, hot water and a change of clothes.

Still loving the series though!