“I’ve looked at love from both sides now…” as the song goes. This weeks 8th episode of Outlander marked the “mid-season finale” of Season 1, which won’t return until April with eight more episodes covering Book 1 (also called Outlander) of the now eight book series. Starz has already announced their commitment to Season 2 (though I’ve heard they’ve only committed to twelve episodes). Season 2 will cover the second book in the series. There was a great hue and cry in the fandom when it was announced we’d be waiting until April 2015 for the remainder of Season 1. It does seem a long wait and it would have made more sense (to me at least) if they had simply said it was Season 1 and Season 2 versus a split season. But that’s how hit cable programs roll these days. Mad Men did it and we’re waiting nearly a year for the 2nd half of the final season. 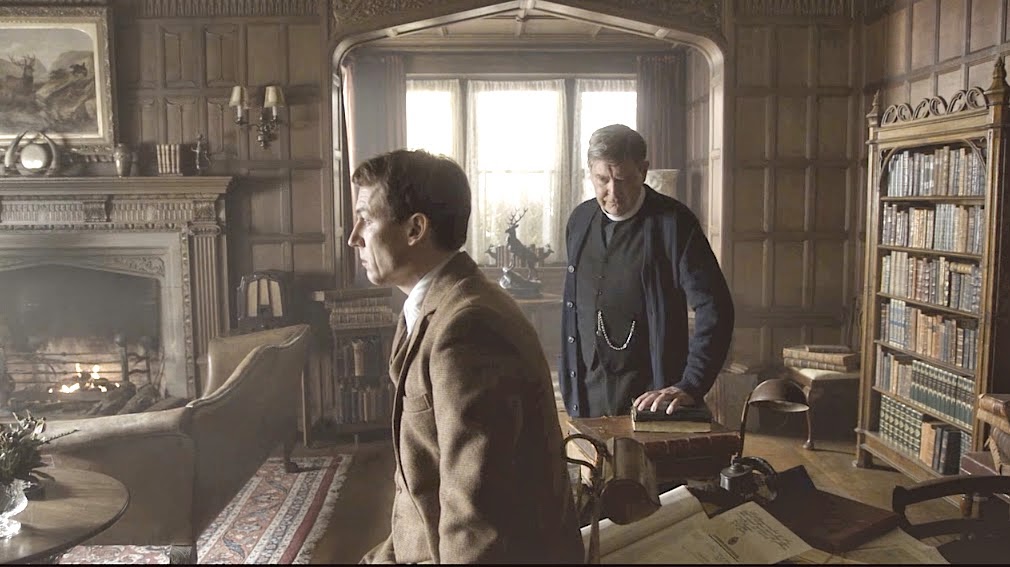 Anyway, after last week’s wedding episode, we see Jamie and Claire doing a lot of romantic “bonding” out in the heather and she learns to defend herself with a sgian-dubh, a small dagger usually concealed in a sock or boot. Good timing since she has ample cause to need it in this episode. In a departure from the original book, this episode features Frank Randall – Claire’s 20 century husband – and the effects that her disappearance has had on him, his on-going search and belief, despite what those around him are saying, that she has not run off with another man.  The book was written in the first person, from Claire’s point of view, which meant that while she conjectured that he must be frantic over her disappearance, we didn’t actually “see” it happening. Readers were treated to how wonderful, nearly perfect, the Jamie character is, but our Frank experience was thin, at best. The reality is, however, that they had a marriage – separated by five years of war – and were working on re-kindling their romance; there was no reason to think that anything was particularly wrong between them. A flaw in Diana Gabaldon’s first book (and it was the first book she ever wrote, written for practice having no though of it being published) was that the first person narrative left off an important aspect of Claire’s moral dilemma of choosing between Frank and Jamie – the one where we needed to see that it was a choice with deep consequences. As it was, many readers simply decided that Frank was somehow bad and Jamie was all good – thus no pesky moral dilemma to deal with. It’s a way more interesting story to be working in the “grey zone” than in such black and white terms.

Speaking of Grey, a funny that’s been going around: Reading fan comments has only highlighted this issue. So many have not liked the greater presence of the Frank character into the storyline  – they want it to be Jamie all the way and couldn’t see how Claire could have any kind of conflict over this. (hello, wedding vows, anyone?) 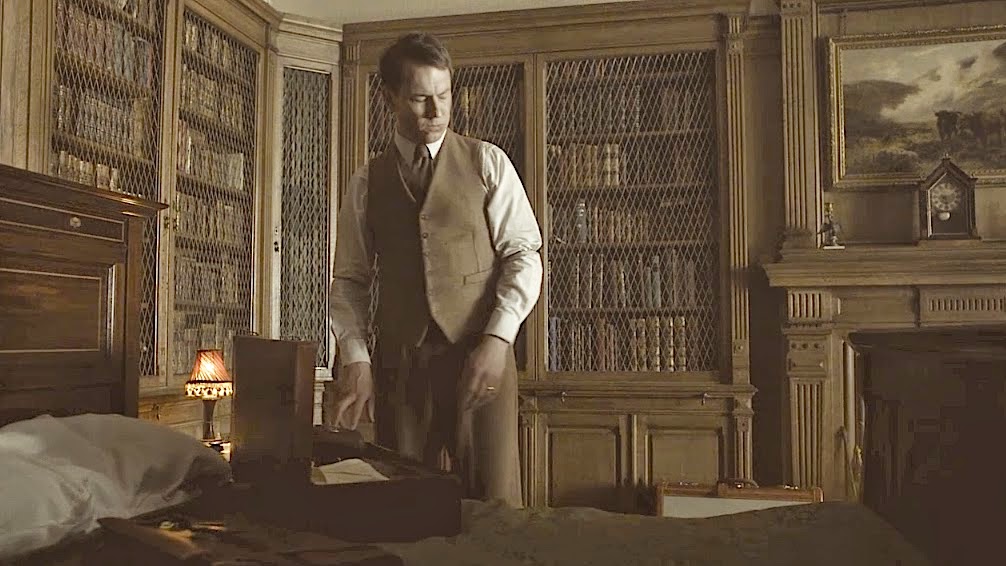 The other bonus of the expanded Frank character is that we are treated with the exceptional acting skills of Tobias Menzies in the dual roles of  20th century Frank and 18th century John “Black Jack” Randall. Double roles can often come across as campy with exaggerated differences between the two, but Menzies has developed two distinct characters using only the subtlest of traits. He has also shown how the two characters have more similarities than just their looks, which is a slightly new twist on to the story. In my mind, he’s the breakout among a very strong cast of actors. 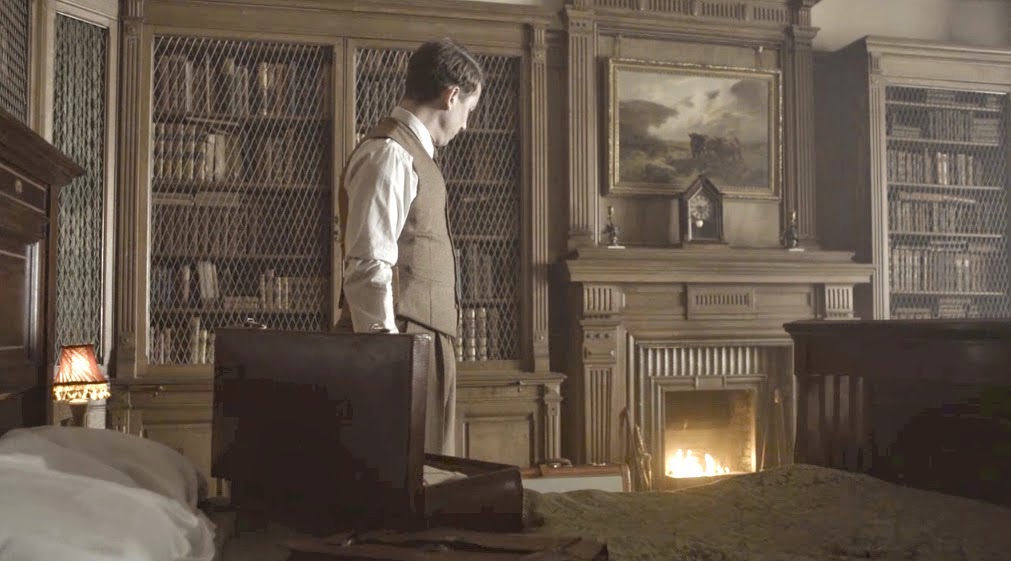 So, this post will focus on a little of Frank’s 20th century world. In the story, Frank and Claire were taking a second honeymoon just after the end of WW2 in the Scottish Highlands where they’d spent their first honeymoon. Part of the trip includes a visit to the Reverend Wakefield, a minister and part time historian, so Frank (also an historian) can learn more about his ancestor, Jack Randall. It all seems so fun and romantic until those blasted standing stones got in the way!

The Reverends house – the manse – in the book is described as large, but old, a little shabby, and overrun with papers and historical minutiea. The house in the show is a little grander and tidier than I think it’s meant to be, but it sure is beautiful with its paneled walls and books galore. The last two shots above show Frank in what is presumably a guest room with a beautiful bed and gorgeous cabinets. 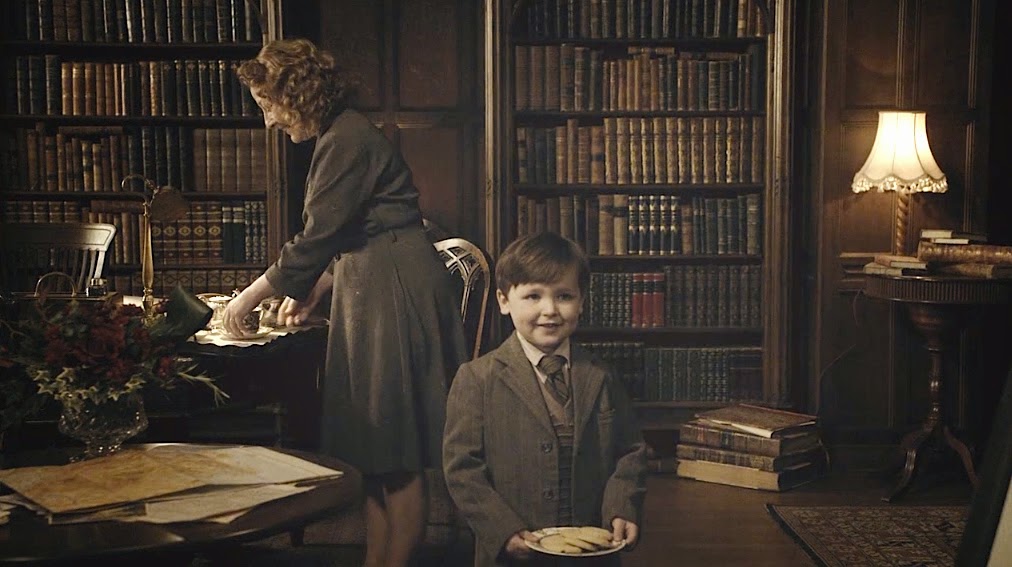 We’re also treated to the introduction of a new character – little Roger Wakefield, née MacKenzie, who will feature prominently in future books.

So, in honor of Frank Randall (since we might not see much of him through the remainder of the series) I wanted to share some beautiful libraries, especially one’s in bedrooms. All images are linked here.

If you’ve been watching, I’d love to hear your views of the show so far  and if you’ve read the books. I just started #7 “An Echo in the Bone”. # 8, Written in My Own Heart’s Blood” was released this summer, so I’ll soon be caught up. I started with Book 1 this past spring and have been working my way through them. If you have read them, you will know that each are between 800-1000 pages.