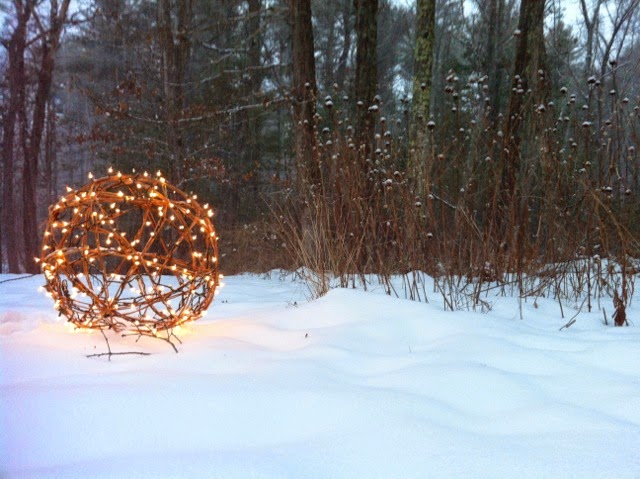 My friend, children’s book author and illustrator Brian Lies, is sharing with us a great project he did last year that turned into this gorgeous, huge, yard ornament for the holiday season.  Brian is a very handy guy and there’s not much he can’t MacGyver.

Usually I don’t post holiday – meaning Christmas-ish – topics this early in the season (hello Halloween!) but if this is something you’d like to try, you’re going to want to collect your materials now while doing your Fall yard cleanup. (Question – do those in warm climates have Fall yard cleanups to do?). In any event, Brian – take it away: I was trimming an overgrown wisteria vine at the corner of our garage and thinking about how many yards of vine material I was pulling away, and wondering if there was anything I could do with it all.  So, I took an exercise ball and began to wind the wisteria around it, holding the overlaps together with florist’s wire. [Note: if you’re doing this project alone, Brian suggests pre-cutting your florist wire so it’s ready as needed]  I started by dividing the ball into quadrants, then going 45 degrees off of those quadrants until I had divided the ball in to triangles: Then I deflated and removed the ball: And I had an orb made from vines. Seems like most people have a string or two of unused Christmas lights around, and I wound several strings around the vines, attaching the strings with florist’s wire as I went.  When I was done, I had a lighted orb—nearly three feet across—which we placed in our front yard, and moved around every few days.  The good thing is that the orb is still in great shape after a year in the garage—the vines dried out into their now spherical shape.  As long as I don’t crush it, we’ll have it to use for at least several years.

Isn’t this just so pretty?? You could make them different sizes – as long as you had different sized inflatable balls to use. Thanks Brian for sharing your project and instructions with us.

Brian’s latest book, Bats in the Band (A Bat Book)

, has just been released. It’s filled with fantastic illustrations and a wonderful text that is entertaining for little kids and grownups alike. I will make a great holiday gift for a little one in your life and you won’t mind reading it over and over and over again!