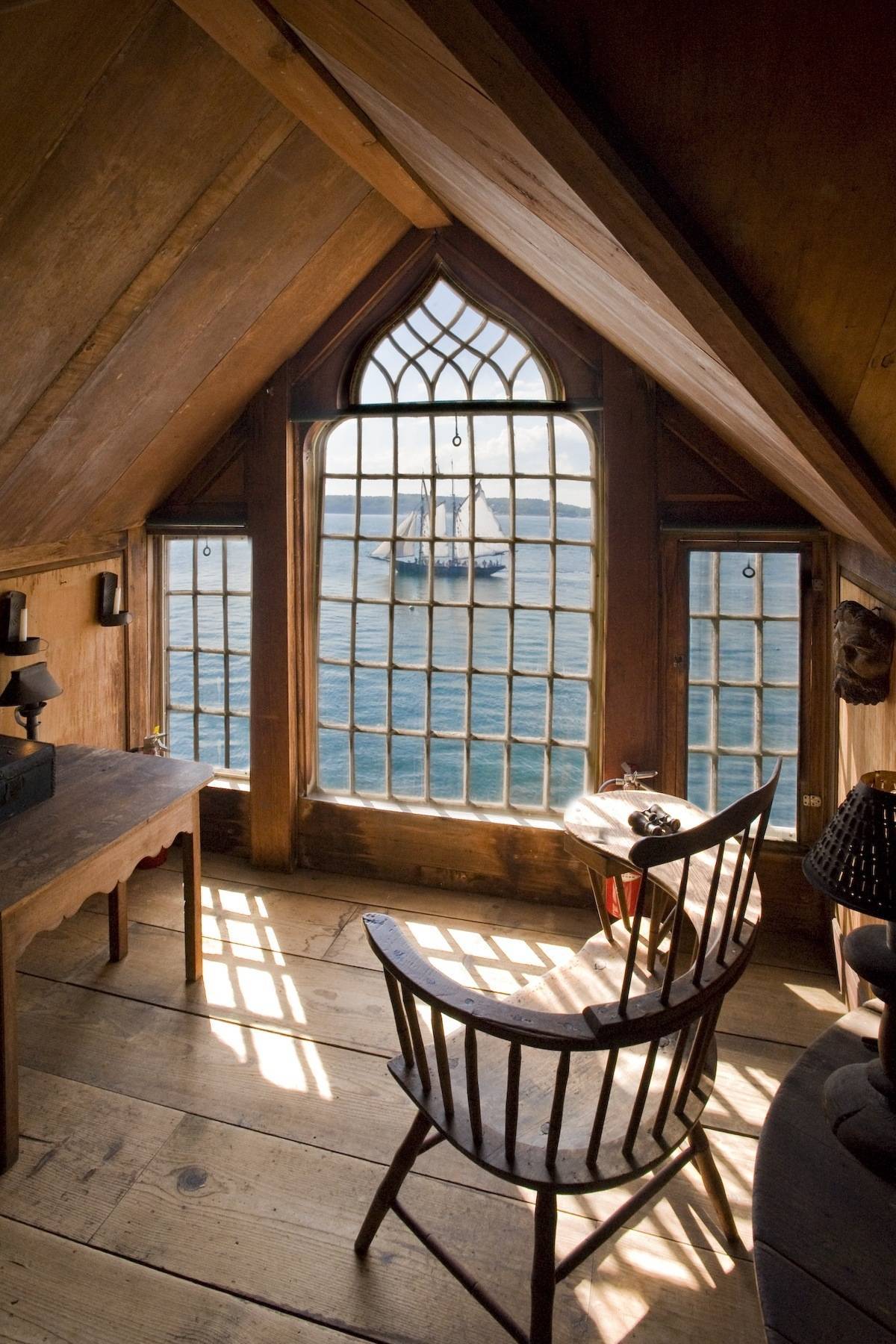 I made a Springtime resolution that this year, I’m going to make a concerted effort to visit some, if not all, of the historic house museums operated by Historic New England. Okay, well, there are thirty-eight properties across the six New England states, so maybe I’ll start by focusing on the twenty-one here in Massachusetts, of which I’ve been to four. So, now, my list is seventeen!

I thought I’d start off with a “virtual” tour of Beauport, the Sleeper-McCann house in Gloucester, MA. Built in 1907 by one of America’s first interior designers, Henry Davis Sleeper, Beauport looks as if it grew out of the rocks overlooking Gloucester Harbor. 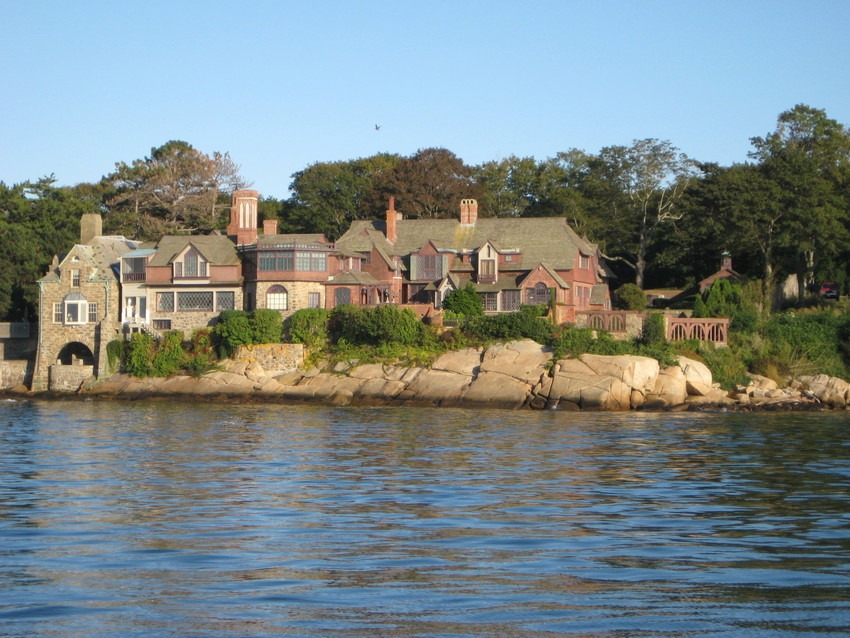 Beauport, the Sleeper-McCann House, was the summer home of one of America’s first professional interior designers, Henry Davis Sleeper. Perched on a rock ledge overlooking Gloucester Harbor, Beauport became Sleeper’s retreat, backdrop for entertaining, professional showcase, and an inspiration to all who visited. After Sleeper’s death, Beauport was purchased by Mr. and Mrs. Charles McCann, who left most of Sleeper’s arrangements and collections intact.

The interior and exterior of the house contain Sleeper’s lifetime collection of curiosities, colored glass, folk art, china, and silhouettes in every nook and alcove. Each of the forty rooms is distinguished by a historical or literary figure, theme, color, shape, or object. No two rooms are the same, with each more visually dazzling than the last. The house is framed by newly restored Arts and Crafts-style terraces that include intimate garden rooms with dramatic views of the harbor. (text courtesy of Historic New England) 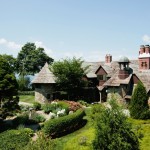 I love the naturalistic quality of the grounds. 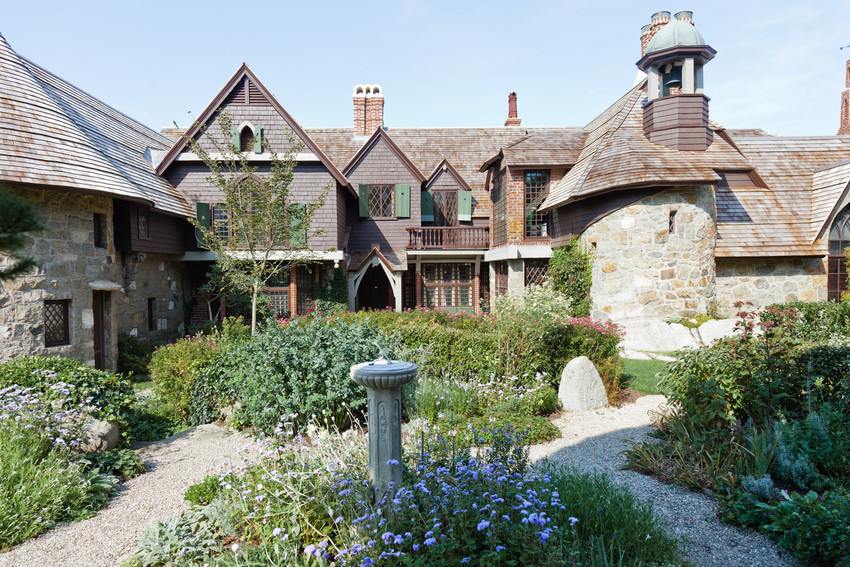 A view of Gloucester Harbor in summer – can’t wait for summer! 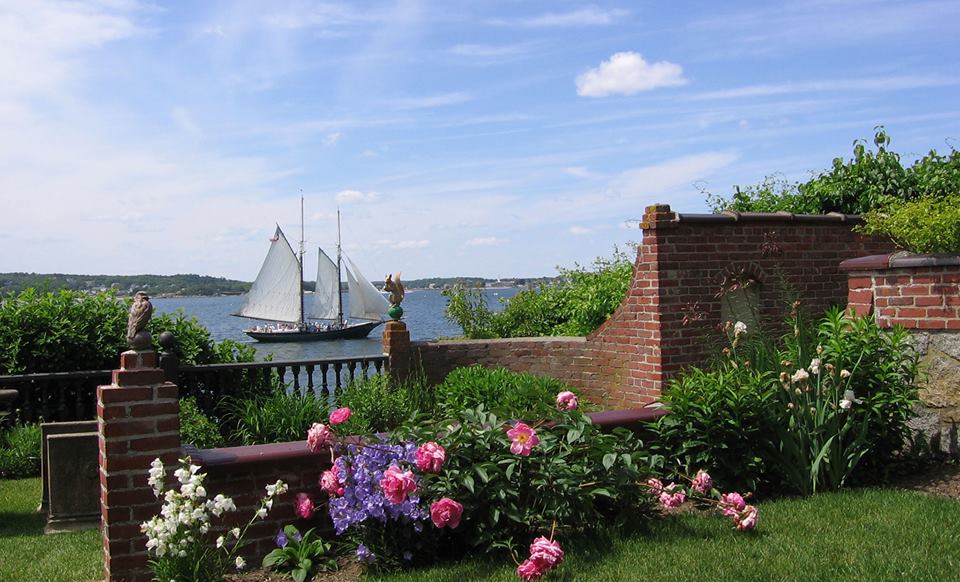 And now we venture inside to the Pine Kitchen, also known as The Pembroke Room. It looks like it pre-dates 1907 but that’s because Mr. Sleeper was a big fan of using architectural salvage which resulted in his interiors looking older than they were (well, they _were_ older, in fact!)

The Pembroke Room, more commonly known as the Pine Kitchen, was constructed with doors and paneling from the seventeenth-century Barker House – his mother’s ancestral home – in Pembroke, Massachusetts. This room was not only Sleeper’s favorite but also became the most copied in the homes of his clients. Visitors to the house were drawn to the colonial hearth with its many implements, charming redware, colonial wing chairs, and wide floor boards that came from the nineteenth-century Dillaway House in Boston’s North End. (Text from Historic New England) 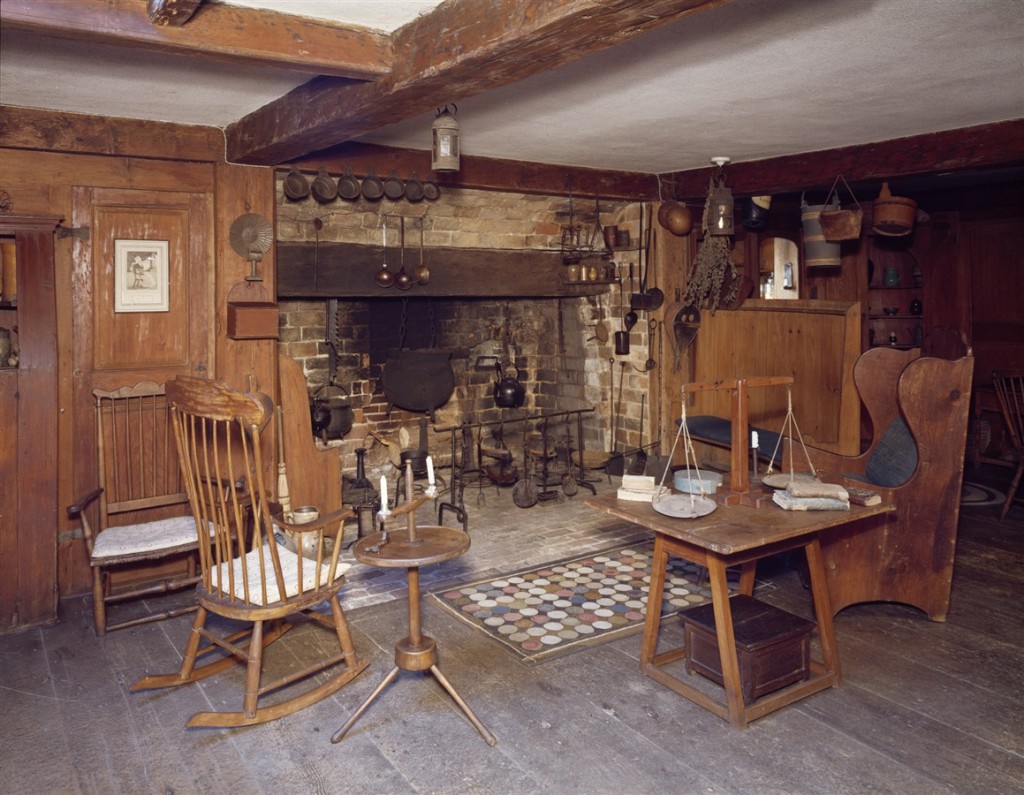 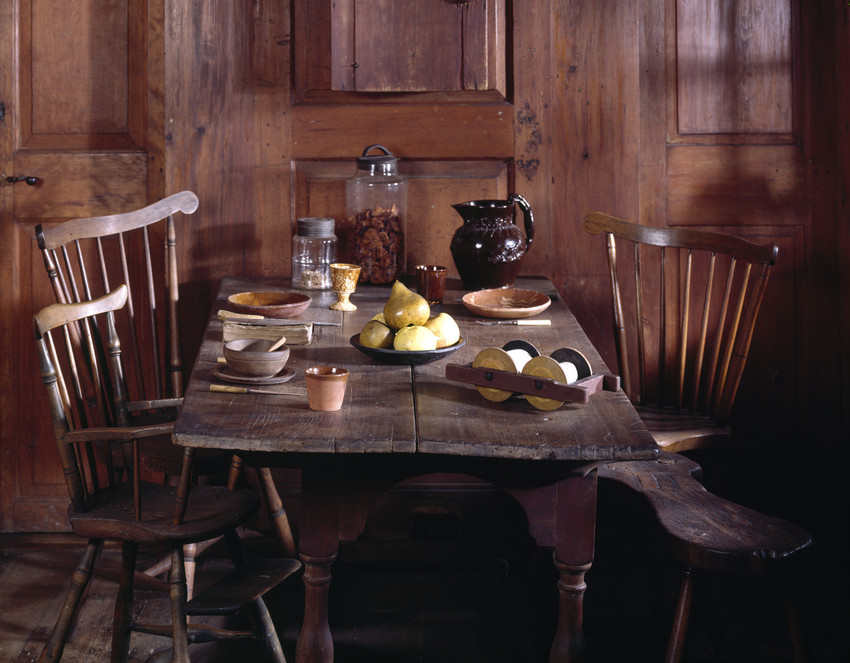 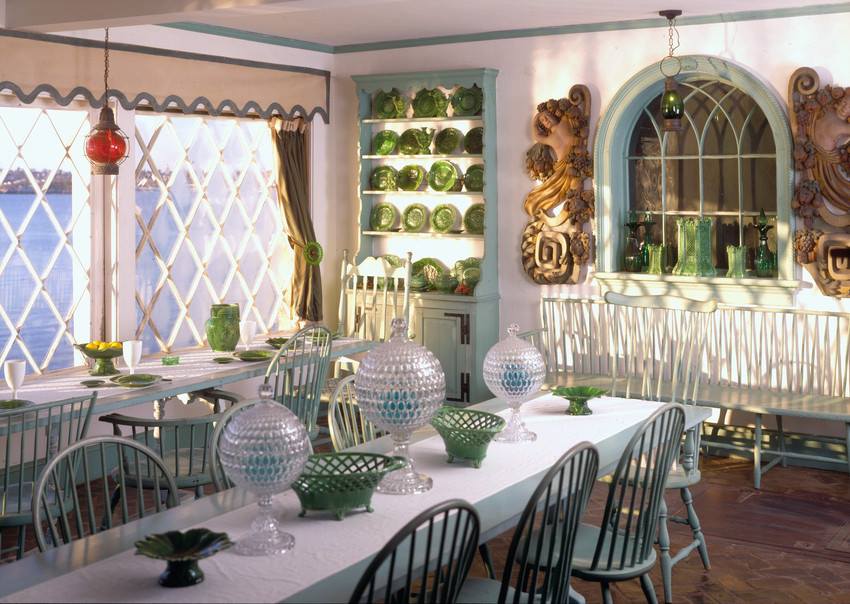 The Book Tower – such a sweet little home office space! Can you handle the sweet little “mini-me” window treatments? I actually wonder if these are painted trompe l’oiel inserts? 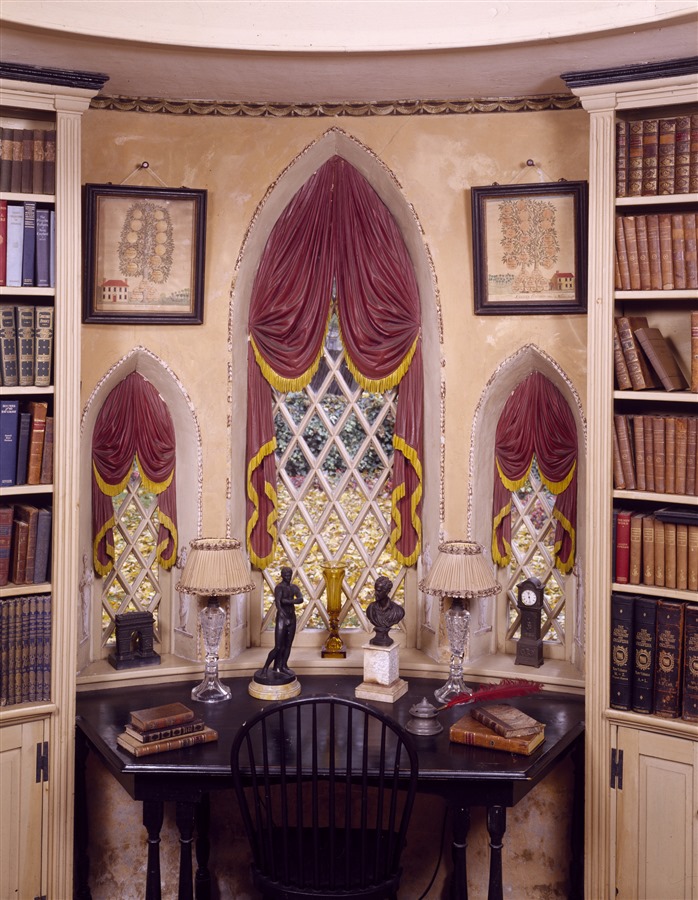 The South Gallery. So much goodness in this space! The highboy, the turned legs on the table, the rugs (floor cloths?) – that paneling! 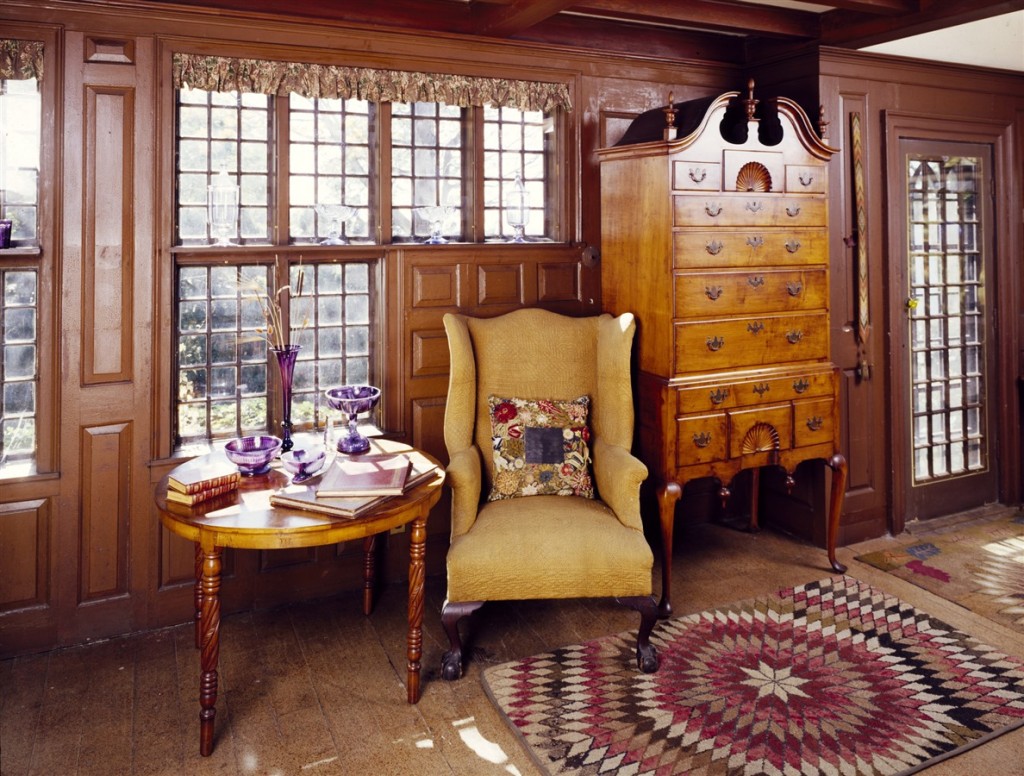 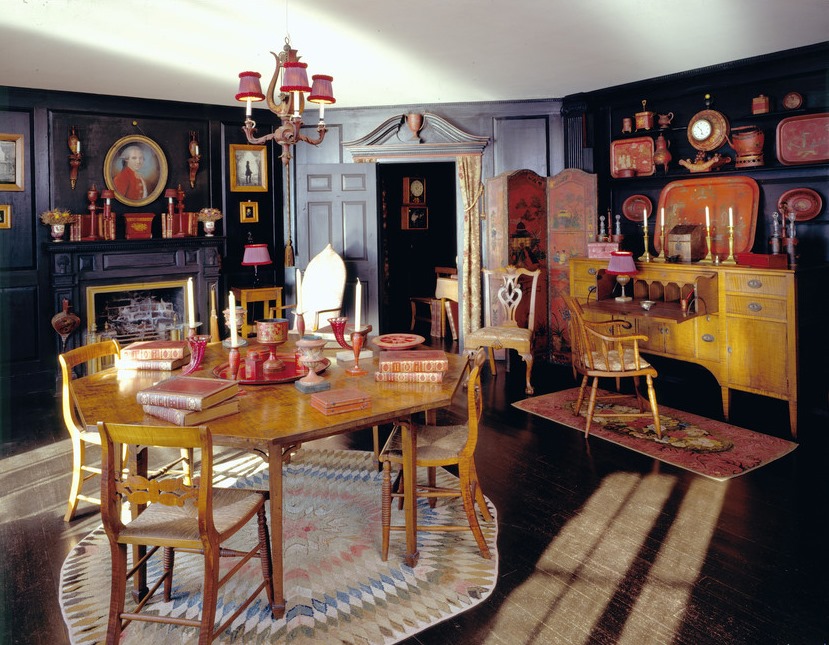 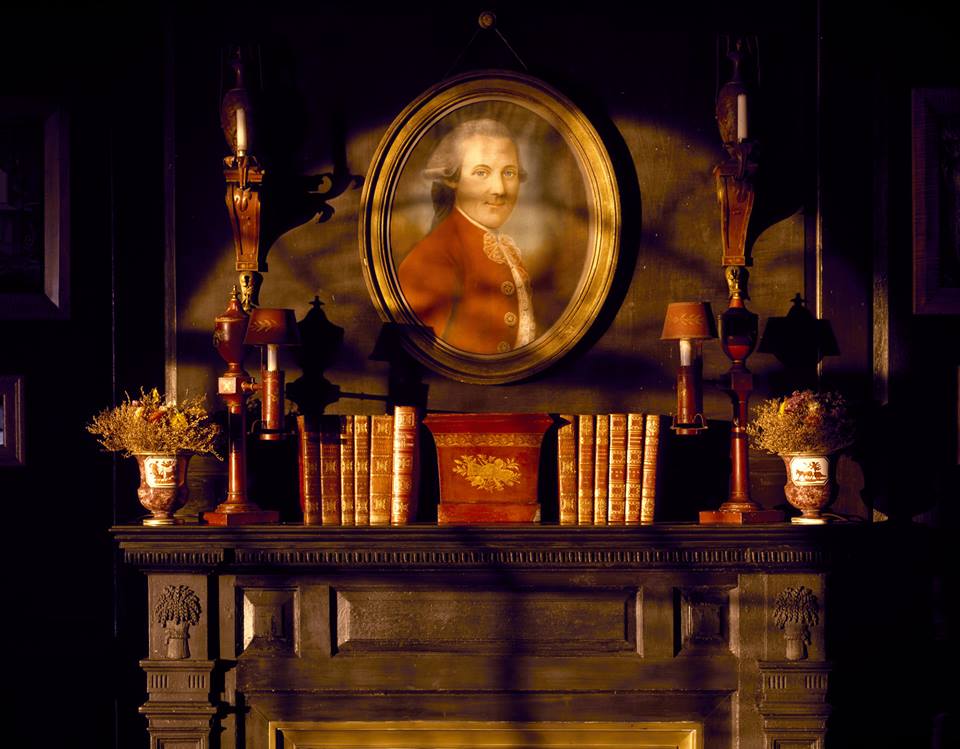 The dark painted walls were originally more purple and have darkened to charcoal. The red accents enhanced the purple hue. The red window shutters are an incredible touch for a summer house with a view. 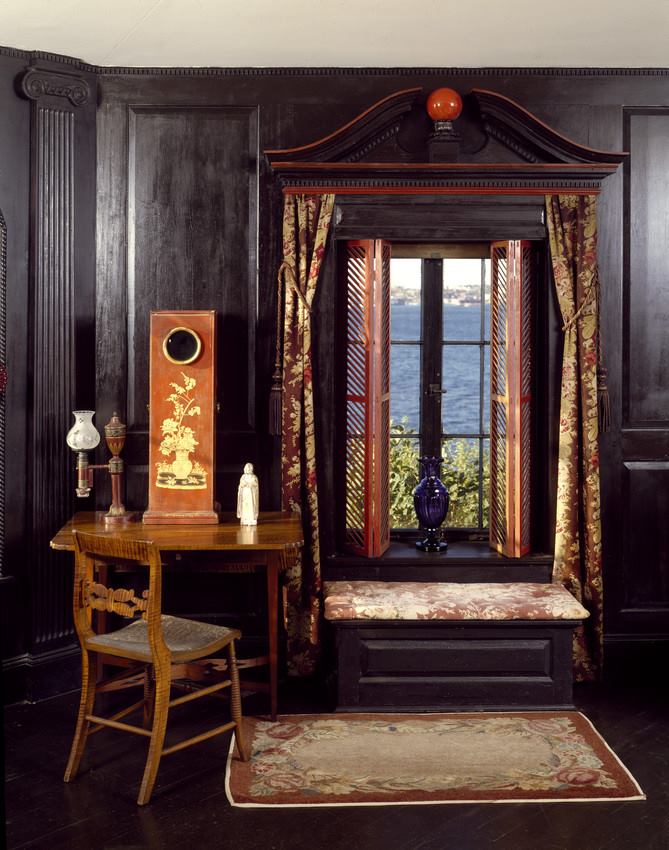 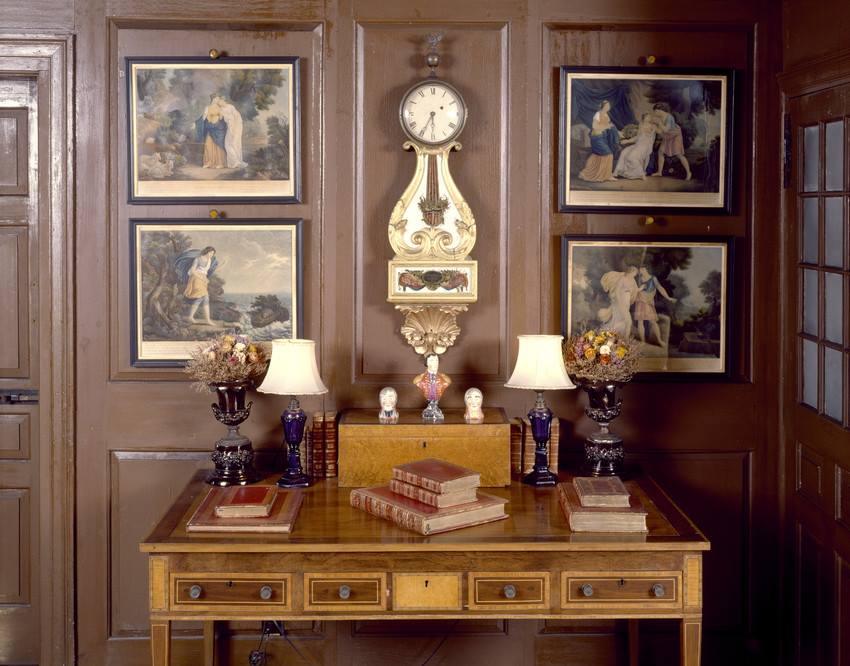 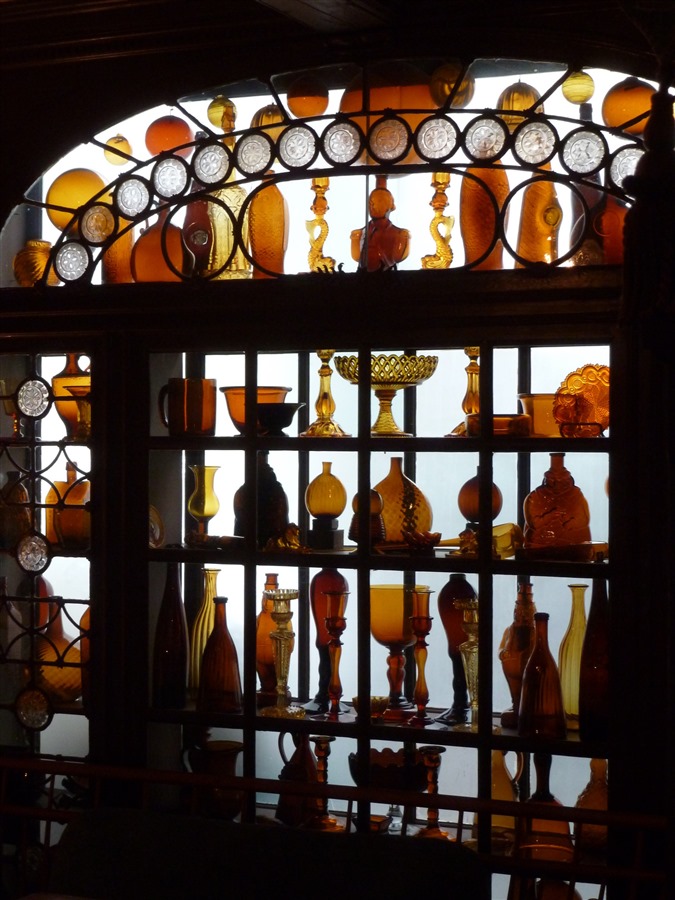 The China Trade Room was primarily the work of the second owner of Beauport – Mrs. Helena Woolworth McCann. Her story is below. 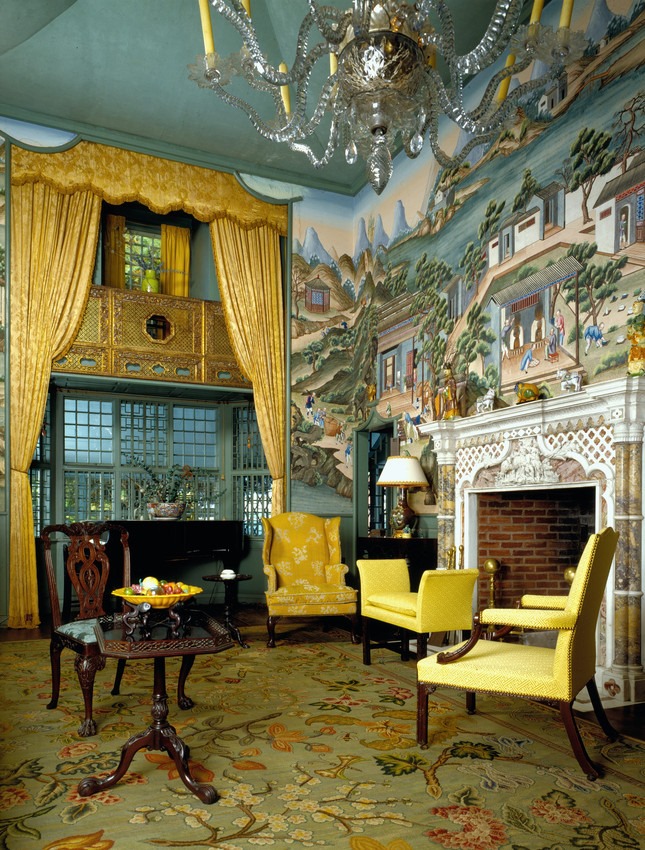 Everything, literally everything in this room is a treasure – from floor to ceiling – the colors, prints and patterns, millwork… 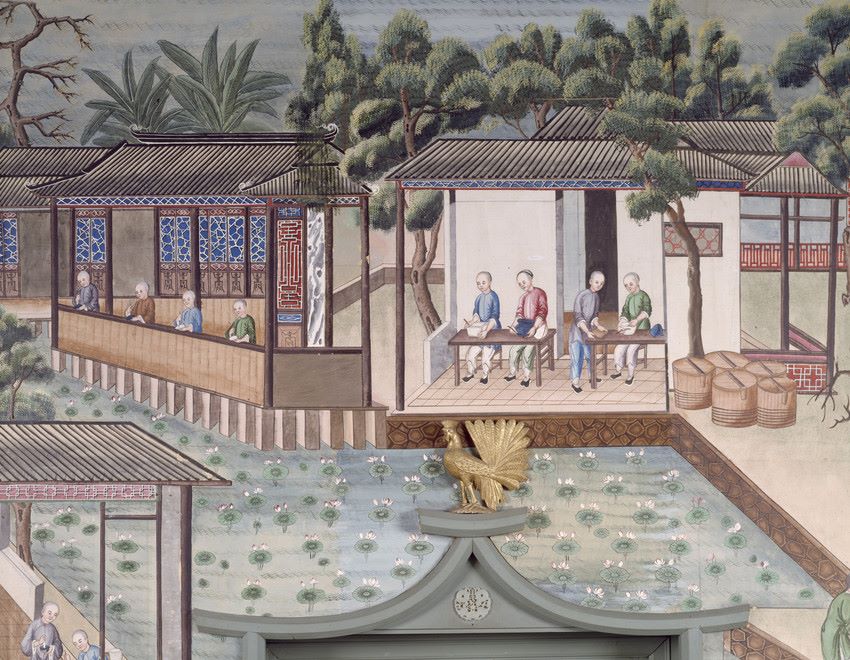 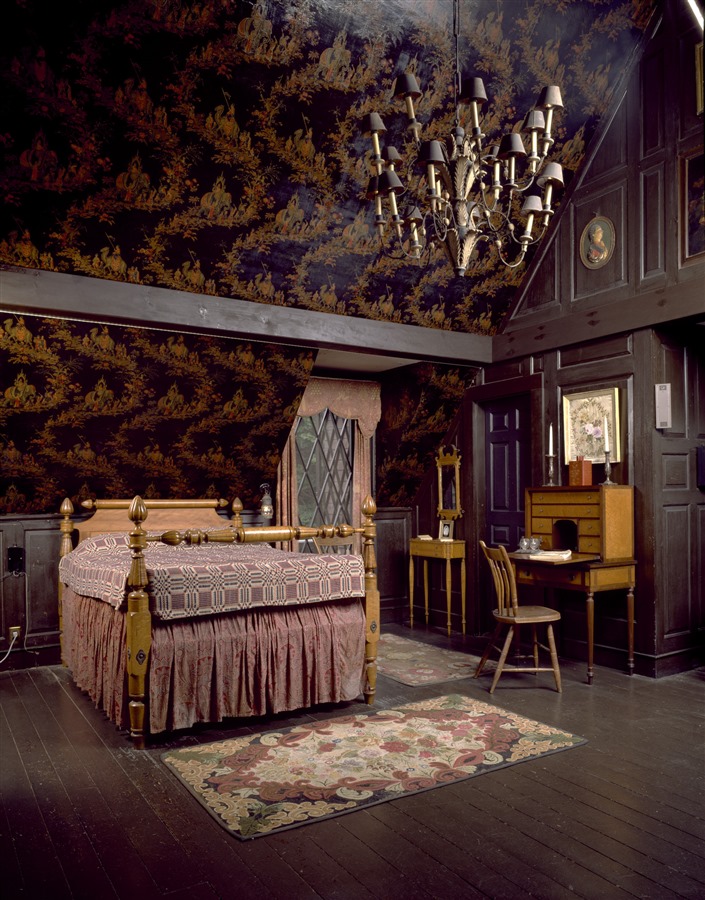 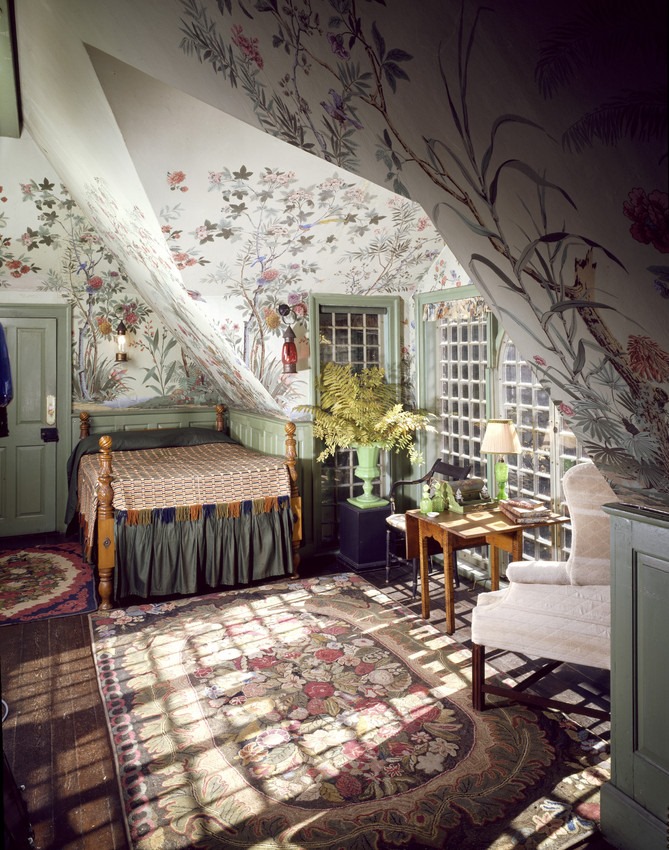 More glass – the presentation of these pieces is just exquisite. Not only does it highlight all the individual styles and colors, but creates a sculptural whole. 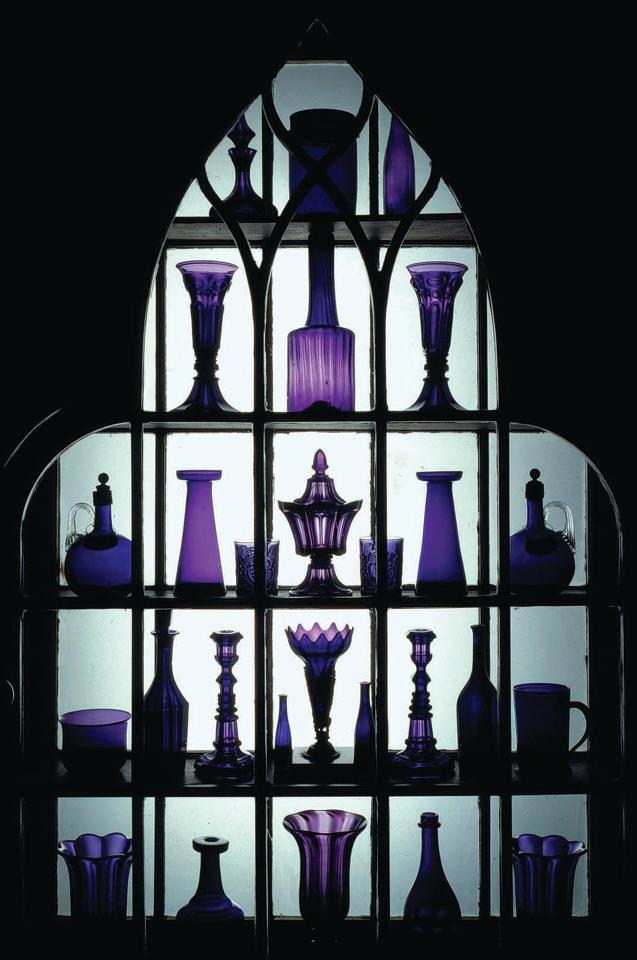 The Master Mariner’s Room. Look at the classic detail on the door! This is not some dust old attic room, that’s for sure. 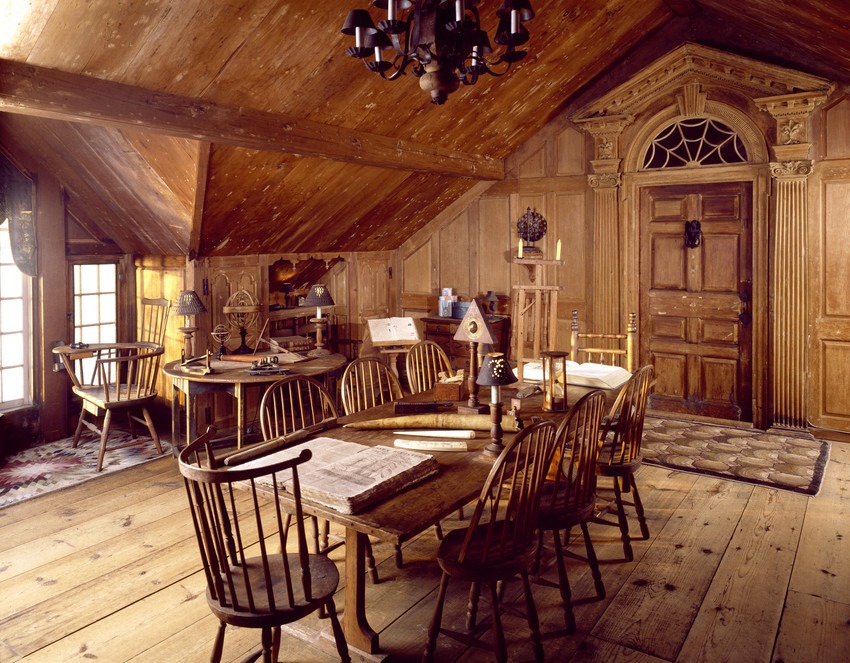 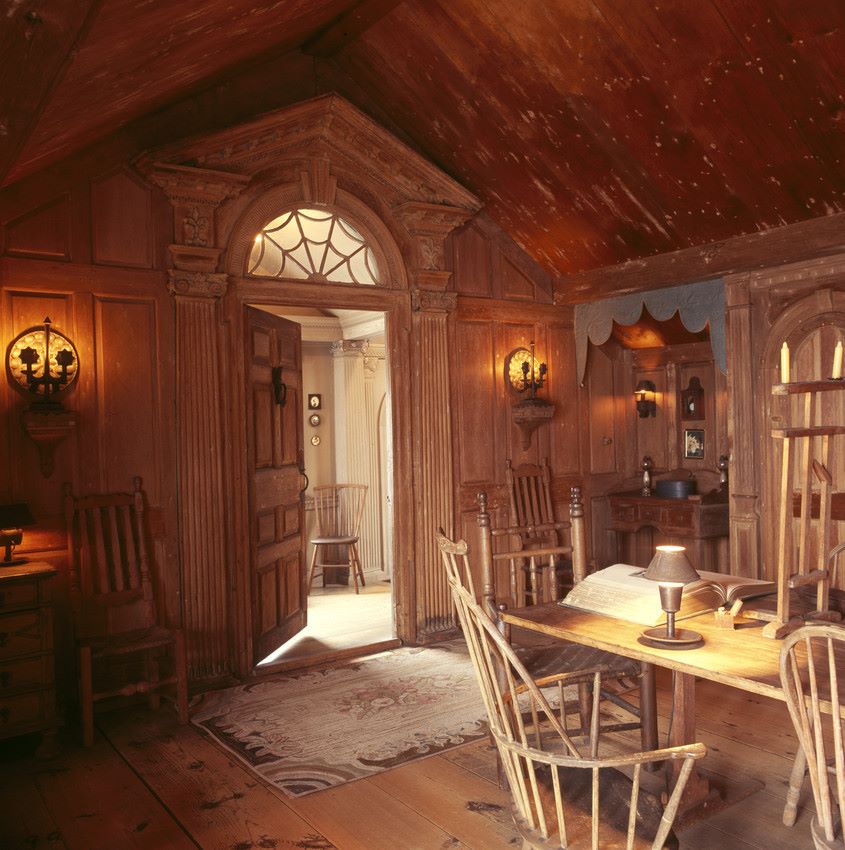 The last photo is what lead me to Beauport. I’ve seen this image all over the place online but there were few credits. Using a google image search, I finally found reference to it being from Beauport and when I saw the image above, it was clear they came from the same room. I’ve been watching Black Sails on Starz and this room certainly looks like the captain’s room from a large 18th century galleon of some kind, especially with the view from the window.

In 1921, Sleeper opened offices at 50 State Street in Boston, moved to 40 State Street between 1925 and 1926, and finally settled in a building at 420 Boylston Street, which housed a number of other interior designers. His work received attention in a number of important periodicals and monographs, including House Beautiful (1916), Country Life (1929), and in several of designer Nancy McClelland’s works. In its early years, he described his business as “Norman and English Country Houses – 17th and 18th Century American Interiors,” but later he modified this to “English and French Interiors- 17th and 18th Century American Paneling.”  He executed commissions for clients including Isabella Stewart Gardner (1923) and Henry Francis duPont (1925) in the East, and in Hollywood, for John Mack Brown (1930), Joan Crawford (1934), and Fredric March (1934). In 1923, he decorated Chestertown, duPont’s new summer home in Southhampton, Long Island, New York and five years later he began consulting for the new wing of the duPont family home, Winterthur, in Winterthur, Delaware.

In May 1934, Sleeper received a prestigious honorary membership in the American Institute of Architects for his outstanding contribution to the advancement of architecture and applied arts as “a collector of Americana and protector of the culture of early America.”  Four months later Henry Davis Sleeper died at the Phillips House of Massachusetts General Hospital in Boston on September 22, 1934, from leukemia and was buried in his family’s plot at Mount Auburn Cemetery in Cambridge, Massachusetts.  Piatt Andrew wrote a tribute published in the Gloucester Daily Times the following Monday, calling Sleeper a man of versatile talent and varied achievement.  In closing he remarked, “A valiant soul left this world when Henry Sleeper’s life ebbed out the other day.”

Upon his death, Beauport went to Stephen Sleeper, Henry’s brother who was forced to sell the property and its contents in order to cover the debts associated with the property. (Side note: apparently interior design as a profession has never been financially stable!). Luckily, the house was sold to Mrs. Helena Woolworth McCann who was also a collector and aside from making a few decorative changes (such as the China Trade Room shown above) and adding her own collections, she mainly kept things as they were – Sleeper’s collections and decorations remained intact.  She had expressed interest in the house going to Historic New England upon her death, but after falling ill, she didn’t make it official. However, her children were open to this when approached and four years after her death, the house, it’s amazing collections and even better history came under the care and protection of Historic New England. In 2003 the house was designated a National Historic Landmark. Here is a fantastic find  – the National Historic Landmark Application for Beauport is online via the Park services – this has lots of great additional information on the house and property.

All photos used with permission from Historic New England. I used photos from Historic New England’s website but also from their Facebook page, which is a wealth of amazing photos and details that aren’t captured on the main website. I definitely encourage you to visit their page. And I can’t wait to visit the house in person! The house opens for touring on May 28th.

10 thoughts on “Beauport, the Sleeper-McCann House”