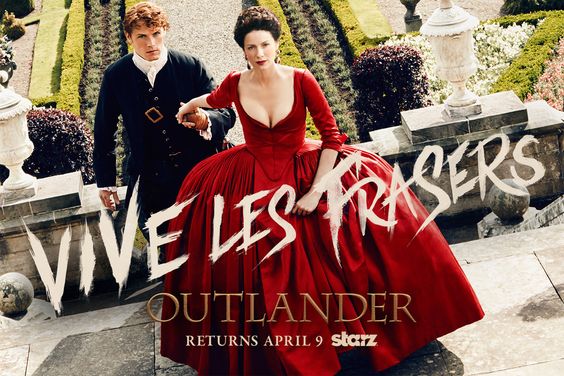 It’s finally here – Season 2 of the Starz production of Outlander based on the massive book series by Diana Gabaldon. I covered season 1 last year (read my Outland posts here) and am looking forward to covering this season even more – because there’s so much more decorative arts to cover! The first season was entirely set in Scotland of the mid-20th Century and mid-18th Century and while there was certainly much beauty, the sets were much more rustic and there were many outdoor scenes. Season 2 (along with Book 2 Dragonfly in Amber) moves the narrative to 18th Century France and the court of Louis XV where our protagonists Claire and Jamie insinuate themselves into the French court in order to stop the coming Jacobite rebellion which results in the devastation of the Scottish clans at the Battle of Culloden in 1746. Claire, with her unique 20th century perspective and knowledge of history, convinces her 18th century Scottish warrior (not to mention intelligent, educated and altogether dreamy) that they can maybe change history. But, does knowledge really mean power? Cote de Texas – my friend Joni writes with such depth and passion you feel like you’re getting a PhD in Decorative Arts History. She will cover the design and set aspects like no one else – including the history of the fabulous set locations used in the show.

Tom and Lorenzo – fashion, style and story recaps from the unique perspective of two men who haven’t read the books and so aren’t mired in the knowledge of what’s to come. It’s actually a testimony to how well the show captures the important aspects of the book. Starz has been running season 1 for free on their website, in case you missed it. Will you be watching Season 2 with me?