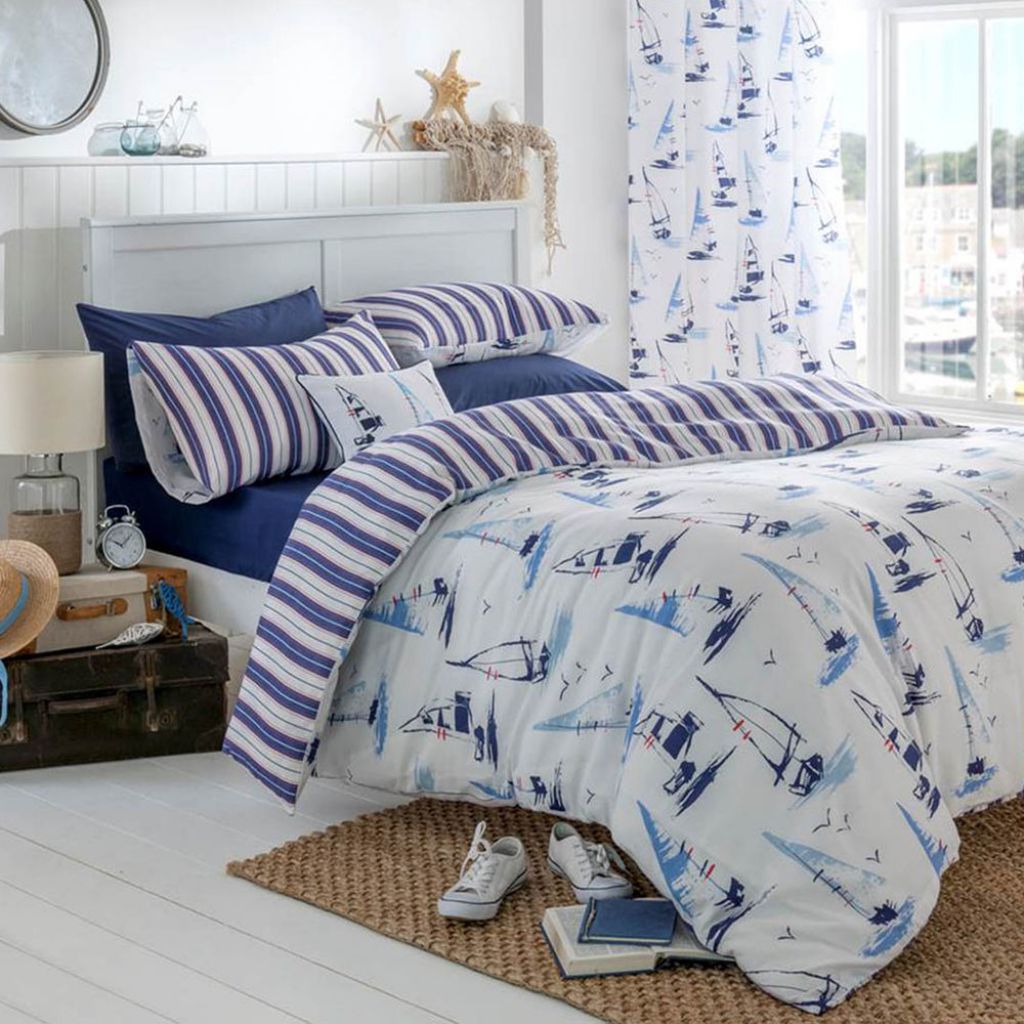 A common musical style is known as “theme and variation,” in which a theme is established and then re-created with variations in rhythm, style and color. Each variation is a different “take” on the same theme and offers the opportunity for personalization and the creation of true art.

Home decoration can be approached in much the same way. 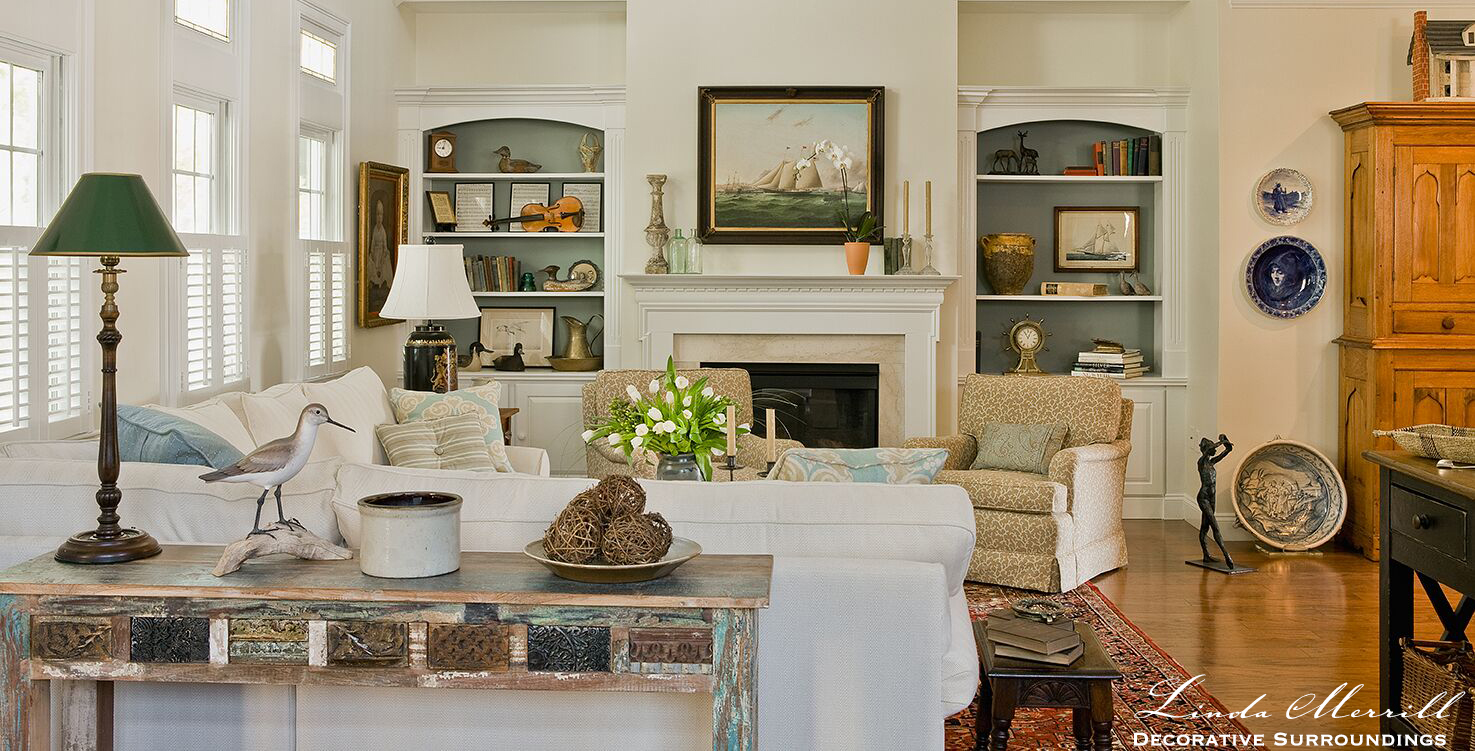 For instance, the “nautical” theme is very popular. Each person who creates it has a different viewpoint and each result varies in style and color. For some, the term nautical conjures visions of sailboats and lighthouses, while others envision sandy beaches and seashells. Each of these variations is acceptable — “correct,” if you will — and can be a great way to express one’s interests or hobbies, or create the feeling of a treasured vacation spot. Establishing a theme is a handy way to start the decorating process as well. Especially popular in kids’ rooms, themes can work throughout one’s home.

This can easily happen in decorating children’s rooms. “Noah’s Arc” is a very common theme for babies’ rooms. Stores that carry baby’s bedding provide multitudes of items related to this theme.

The room below is pretty amazing, though still a tad over the top.

Instead of covering the entire space with the same images, why not limit it to one or two elements? Use it in the bedding, then go for coordinating colors elsewhere. A few pairs of animals on a shelf would help illustrate the theme, as would an ocean mural on the walls. Perhaps the crib could become the arc with a sail canopy, a blue/green rug for the ocean and blue sky on the ceiling. There are so many options available that put the theme-and-theme-alone style to shame.

Here are a few other popular themes: France — While we may have some notable political differences, many Americans, myself among them, are enamored with all things French — from the bistros in Paris to the lavender fields of Provence. Eiffel tower lamps, black-and-white photographs of rainy Paris streets or artwork with purple lavender fields stretching as far as the eye can see are prominent examples in this decorating style. Stores are filled with ceramics and porcelain pieces stamped with French hotel and restaurant names; we can purchase French milled soaps in Marshalls; and we drink Champagne from elegant stemware.

I speak from firsthand knowledge of how easily a theme can be overdone to the point that it becomes a caricature of itself. I wish I could own a pied-a-terre in Paris, so instead, I started purchasing items with the words “Paris” and “France” on them, thinking it would transport me. Rather than feeling transported, I only ended up supporting the companies that make such “objets d’art.” I had to look deeper into what I love about France. For me, it’s the elegant architecture and the old world charm mixed with the contemporary flair. It’s streetlights and cobblestones, lingering over coffee at a sidewalk café, a walk in a park. It’s glamour and grit – the old with the new. It’s not labored or overly defined, it’s just a feeling and style that has developed over centuries. It’s definitely not little signs that say Paris. 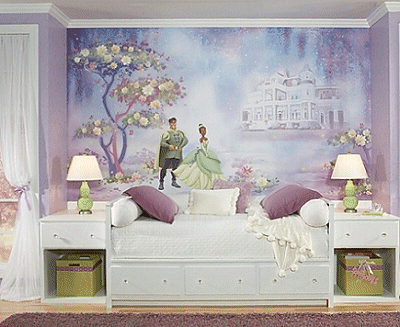 Princess style — Many little girls, and their mothers and grandmothers, love the princess style. It evokes dreams of knights in shining armor, fairyland castles (OK, here we are in France again!) and beautiful dresses. It seems as if Disney has cornered the market on the fairy princess style with merchandise for Sleeping Beauty, Belle, Snow White, Tiana and Cinderella (and so many more). It’s easy and accessible — and ceaselessly marketed to the under-five-year-old set. Much like the Noah’s Arc theme, we end up with sheets, blankets, posters and wallpaper borders with the same cartoon characters all over them. This may be good for Disney, but it’s bad for personal originality. I love the image above showing Tiana and her prince, which I think was from a mural company. The one mural wall influenced the color palette of the decor – which is simple and lovely and definitely does not hit you over the head. Let’s face it – not all little girls want to be a Disney princess, or they grow out of it. This room above would easily transfer to a different theme – garden, flowers, fairies, French (again!).

However you create your theme room, keep these tips in mind:

· Decide how the theme you want “speaks” to you. After all, it will be a reflection of your personality.
· Select the right color palette to set the mood.
· Don’t overdo the accessories. Remember, creativity comes in the variations.