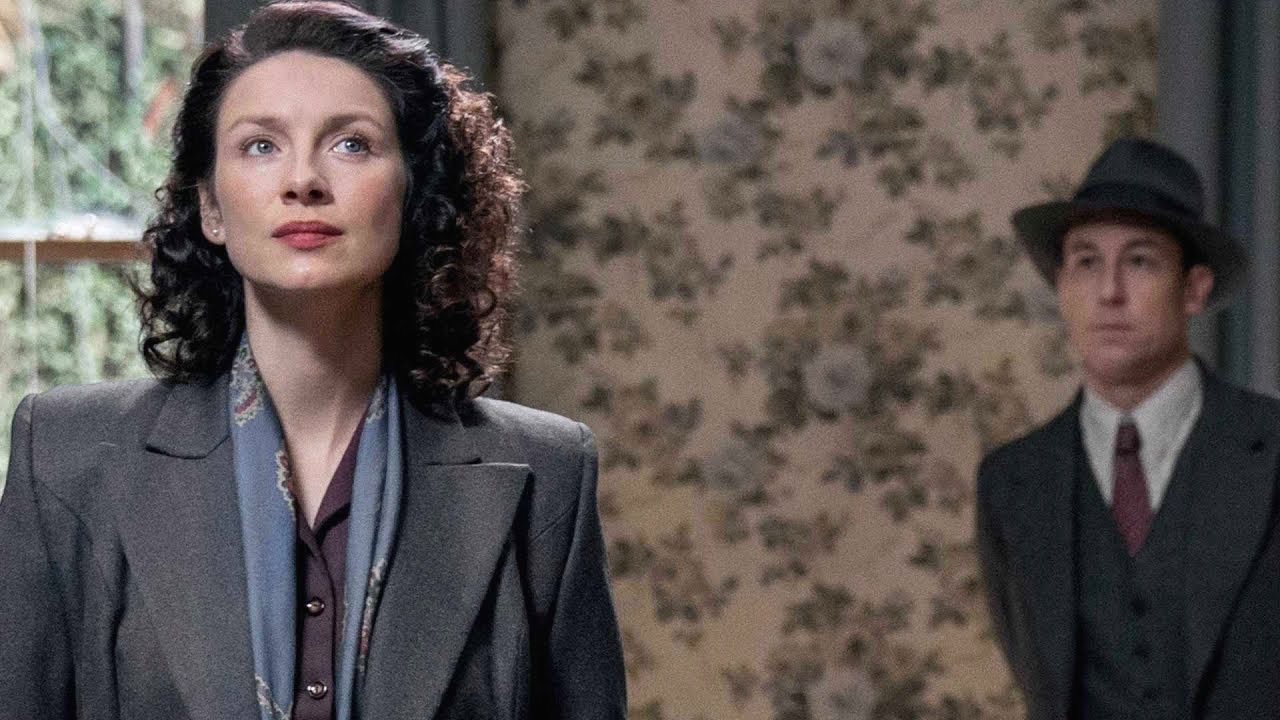 After a very long “Droughtlander”, the Starz series Outlander has finally made it’s return! Based on Diana Gabaldon’s book series,  Outlander Season 3 (based on Voyager, the 3rd book in the series) focuses on the twenty year separation of our two leads – Claire (Caitroina Balfe) and Jamie (Sam Heughan) – and how they tried to survive without each other, their eventual reunion (spoiler alert) and subsequent adventures at sea. The book covers a lot of physical ground from 18th century Scotland and England to 20th century Boston, back to the 18th century aboard ship and ending in the Caribbean. The season was filmed in Scotland on a large sound stage in Cumbernauld, in Glasgow for exterior scenes and in South Africa, making use of the Black Sails sets for the shipboard time and various Caribbean islands. It’s unquestionably a lot of work and expense to be able to create all of these worlds. So, while I understand that why they did not shoot any exterior scenes in Boston or at Harvard University, I do really wish that they had tried to better match the exteriors. As it was, in Outlander Boston there was literally not one iota of the flavor of Boston, Cambridge or Harvard to be had.

Filmed in North Glasgow, these are screen grabs of the street where Claire and Frank (Tobias Menzies) live. Reading the books, I’ve never gotten a strong sense of where in Boston they lived. Frank’s job was at Harvard, yet the references were always to Boston, not Cambridge. Interestingly, for all the detail and description that Gabaldon puts into her writing, she was not at all descriptive about the Boston home where Claire spent twenty years raising her daughter. I suppose this might be because Claire was just not that into it.

So, here’s the thing about Boston. It’s an old city (by American standards) and the main neighborhoods – Beacon Hill, Back Bay, South End and the North End – are all pretty much still as they were by the end of the 19th century. And not one of them looks like what we saw on the screen. Boston is a city made of brick. 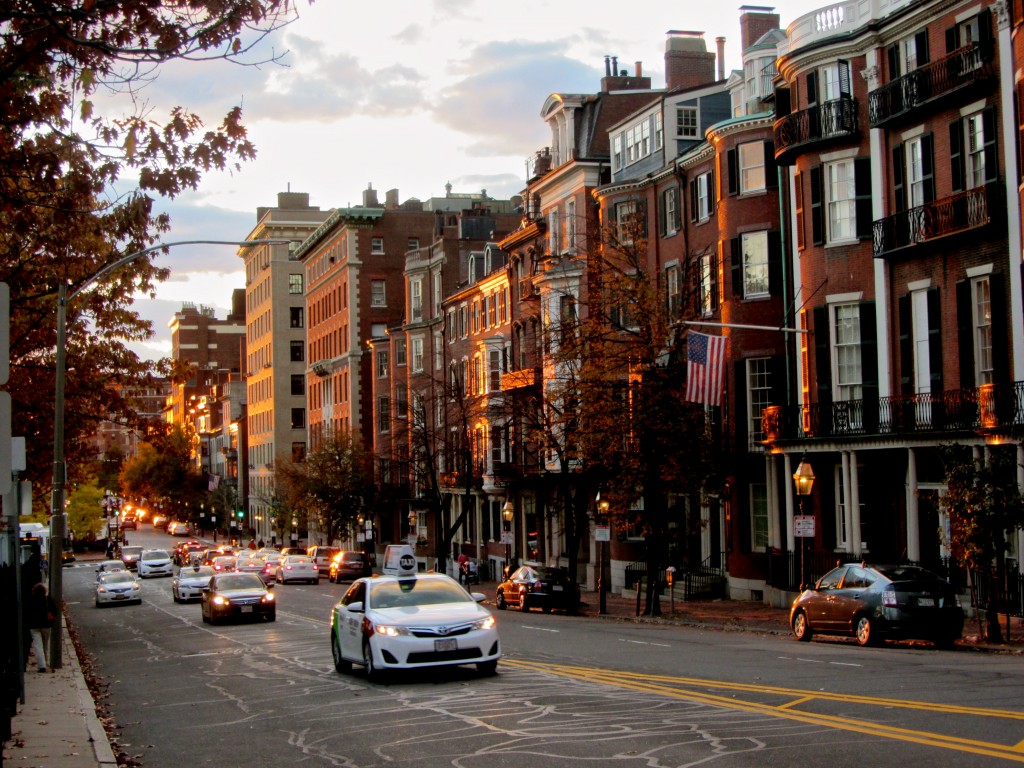 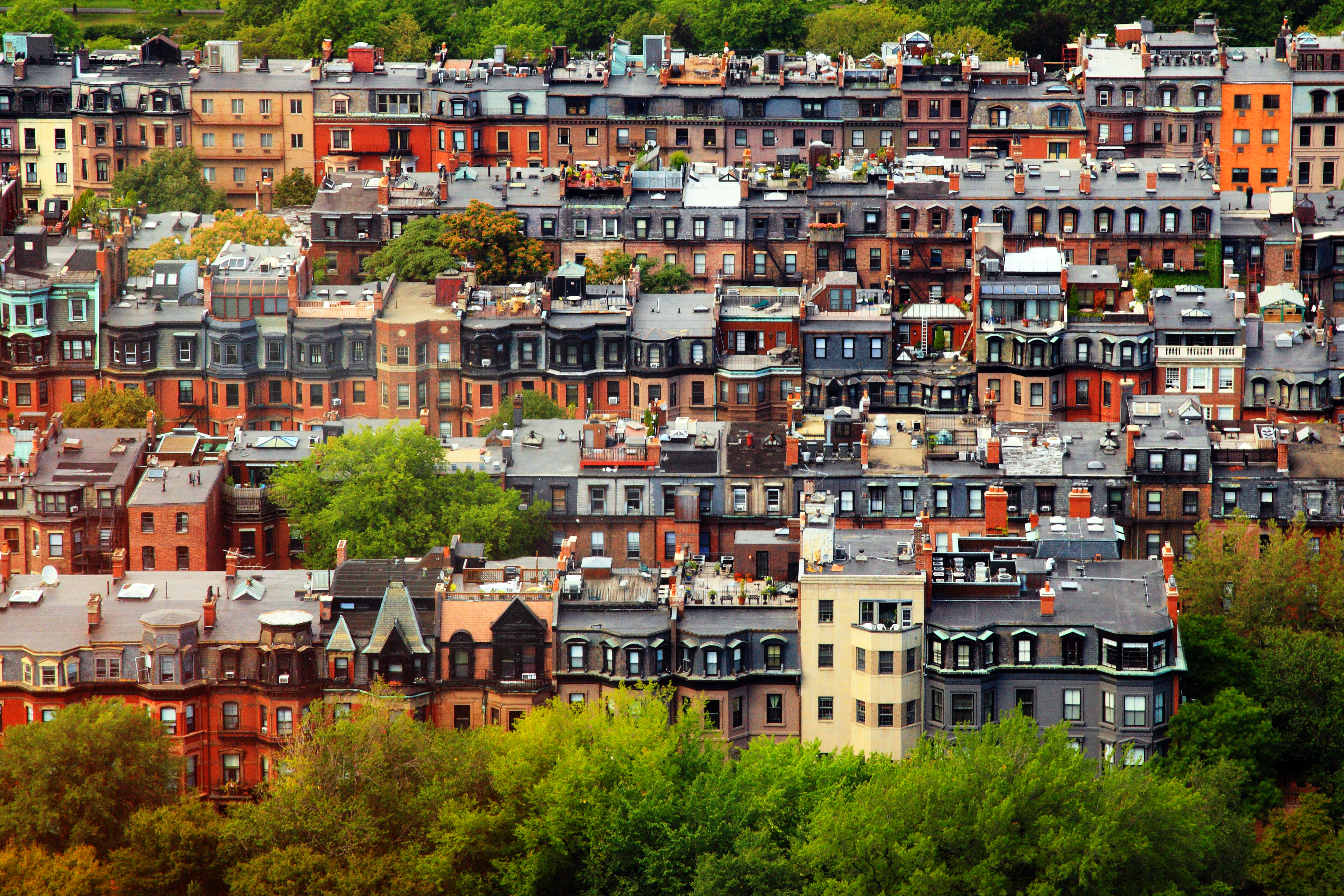 Of course, not every building is made from brick. Below is the exterior of my Back Bay Bachelor project which was on Beacon Street. Next to my client’s house was the former residence of Tom Brady and Gisele Bundchen. But brick really was the predominant building material. 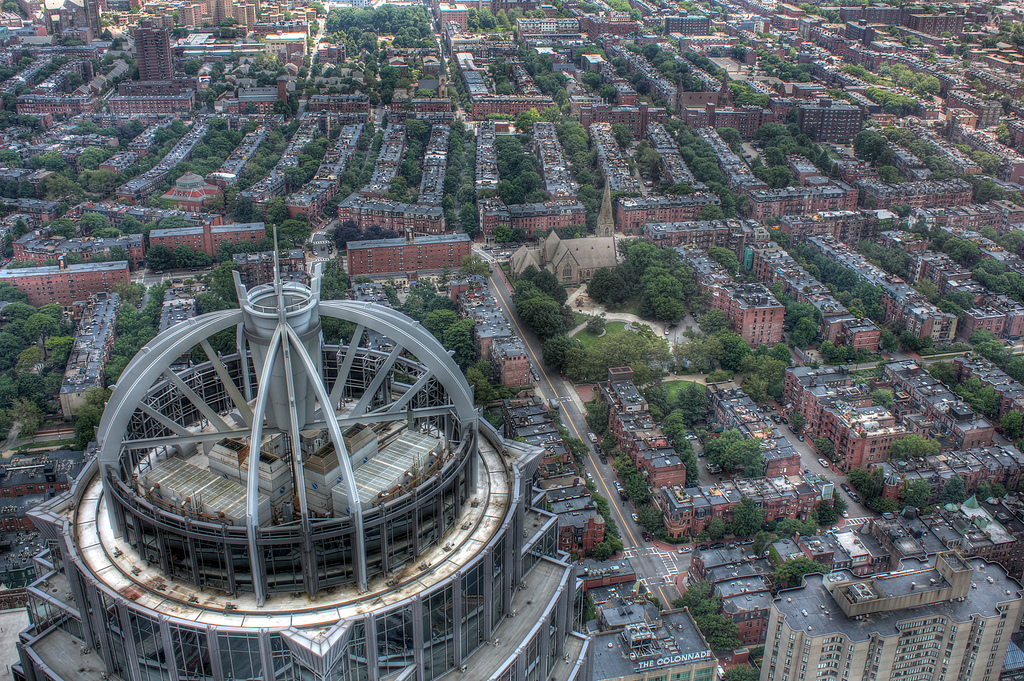 Interestingly, I’ve also seen this photo below which is credited as being from West Glasgow depicting Claire and Frank in Boston: 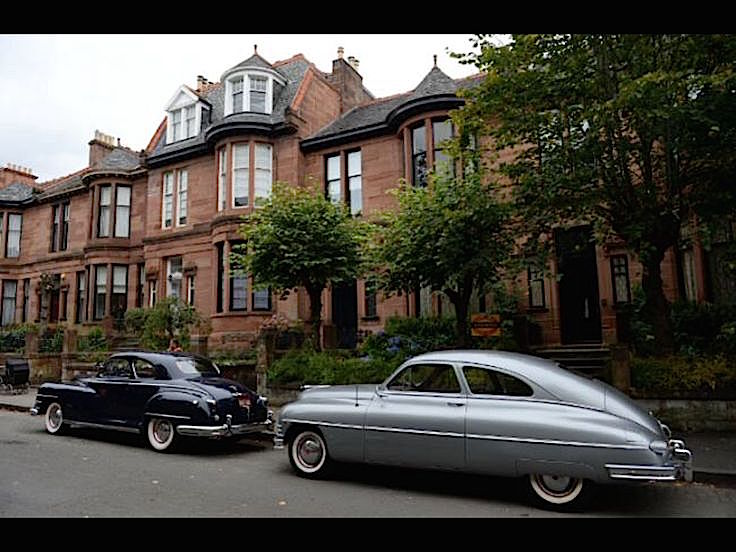 The silver car is the same, but clearly the location is different. Maybe they move in the show? I don’t know other than all the interior shots of their Boston home seem to be the same set. Maybe they had to re-shoot exteriors for some reason and switched the locations. Obviously, this location is much closer to the feel of Boston. The buildings don’t have as many stories, which are usually 4 -5 stories. But the red brick row houses are just warmer. And this is what the Outlander Boston settings really lacked  – warmth. It all just felt very cold – which could have been intended to show the state of their marriage and Claire’s POV.

And then, there’s the real thing…Harvard Yard via 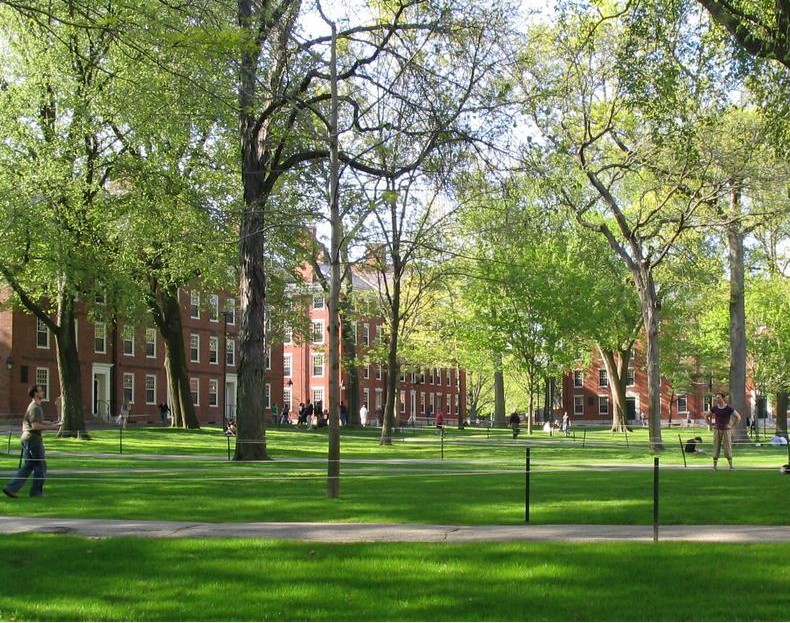 Aerial view of Harvard via 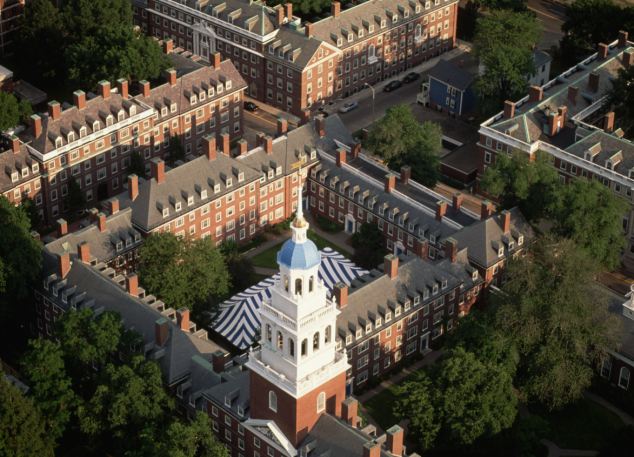 I believe I’ve heard that Harvard does not allow much filming on their grounds ever since the movie Love Story was shot there and there was damage done.

This scene from Good Will Hunting was filmed at the Au Bon Pain across the street from the main entrance to Harvard Yard. They also had a scene outside a dorm that I can’t find an image of (without scanning the whole movie) that shows they tried very hard to make it look like it was at Harvard. Of course, Matt Damon went to Harvard and both he at Ben Affleck grew up in Cambridge, so they’d know what it looks like.

And in the movie Legally Blonde they did aerial shots of her arrival at Harvard and then shots in Harvard Yard were shot at a college in California. The made a concerted effort to have it look like Harvard.

Of course, one might say I’m nitpicking. Again, I totally understand why they didn’t do any location shooting in Boston and at Harvard. I just wish they’d done a better job of mimicking these two iconic and well-documented settings. Future episodes may show a more fleshed out setting but I would have thought our introduction to Boston and Harvard, through Claire’s eyes, would have been the most detailed so as to set the stage.

And, what of the interior scenes? As noted above, their apartment was built on the Cumbernauld sound stage by designer Jon Gary Steele and set decorator Gina Cromwell. They do have a wonderful level of detail. 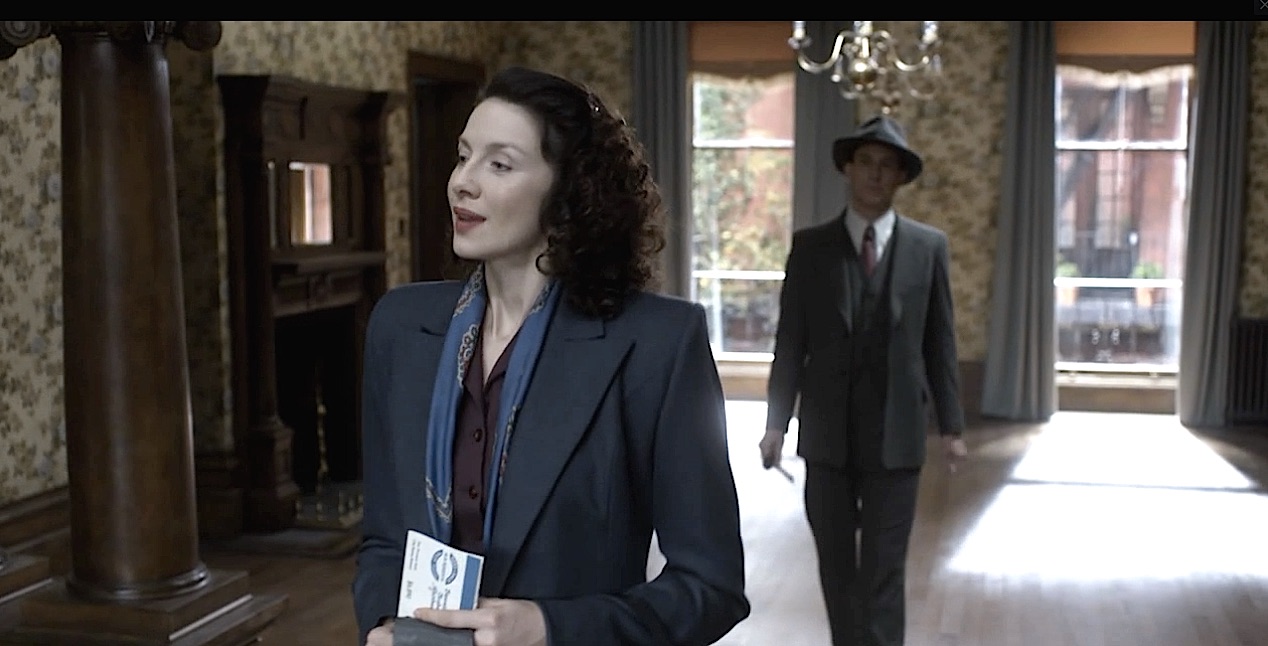 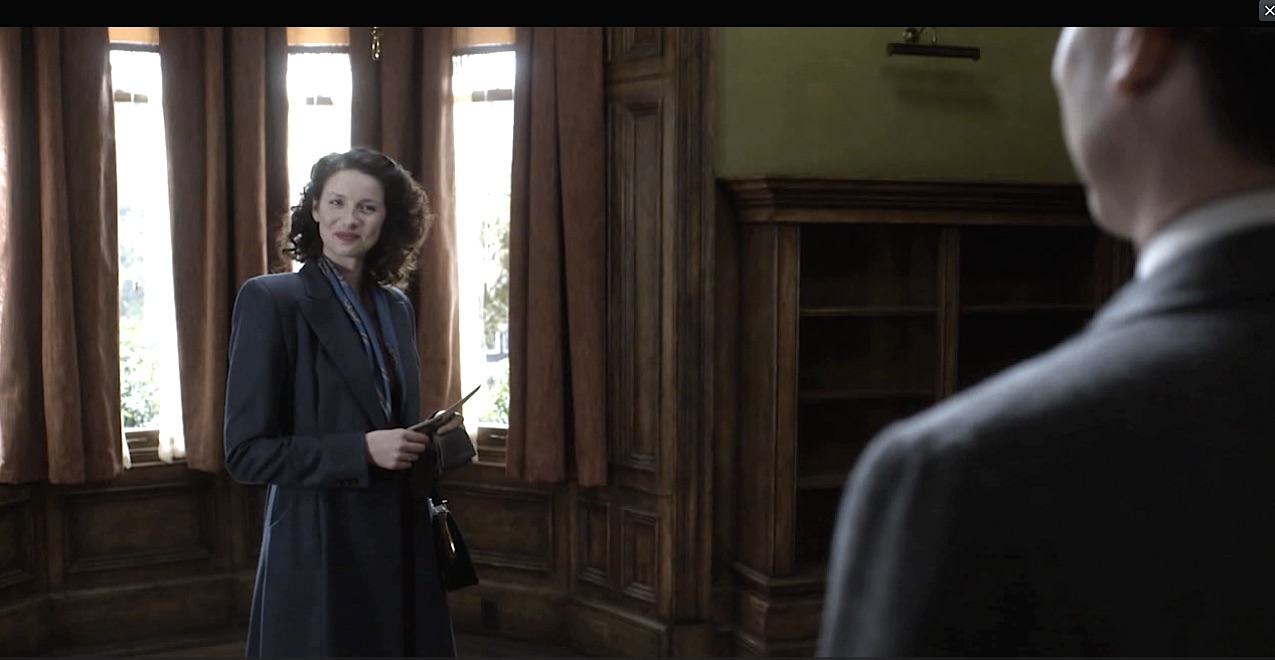 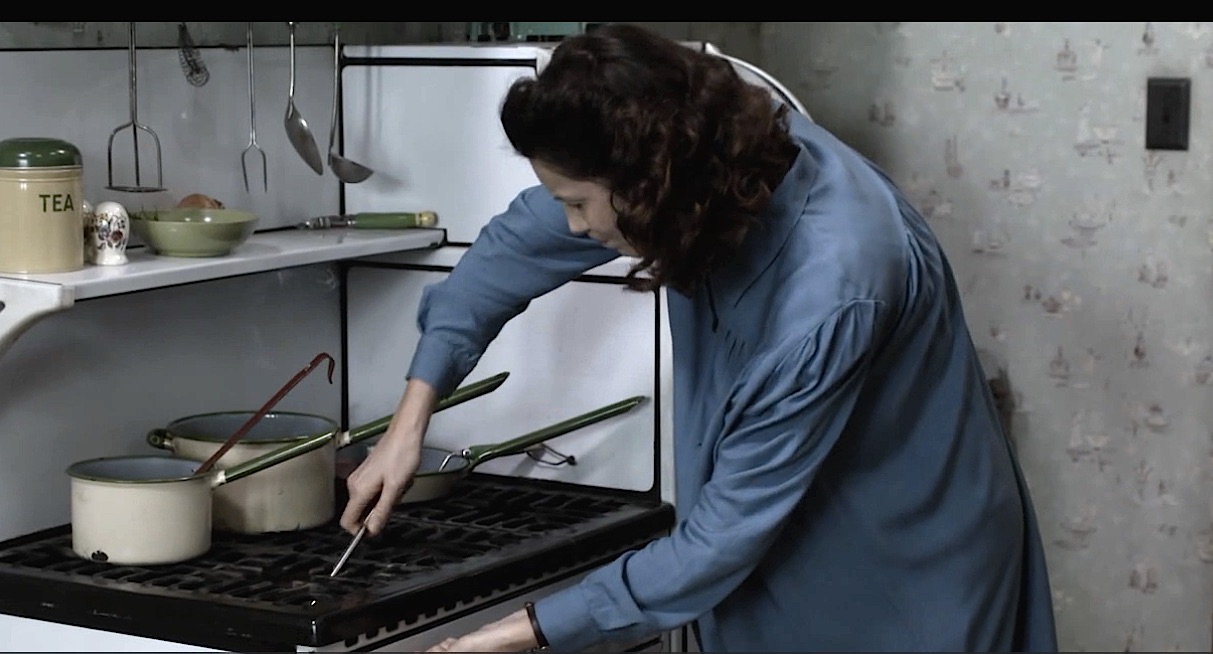 The woodwork all seems quite accurate, however, the staircase feels very wrong architecturally. 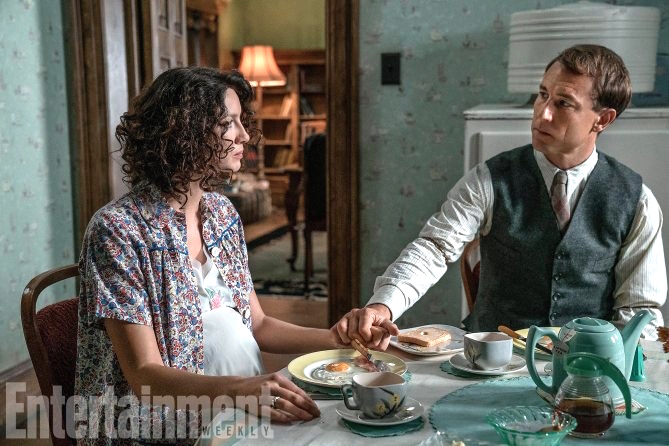 While I do think this apartment is a little large for the salary a visiting professor (even at Harvard) might be able to afford (even Claire asks if they can afford it and Frank acknowledges that it’s a stretch) – it IS a lovely apartment. Notably, everything is very dark – I actually lightened up the screen grabs so we can see more detail. Aside from the kitchen, the rest of the house is very dark with rich dark wood work and color palette, along with low lighting. Since this is a row house, there are only windows in front and back. 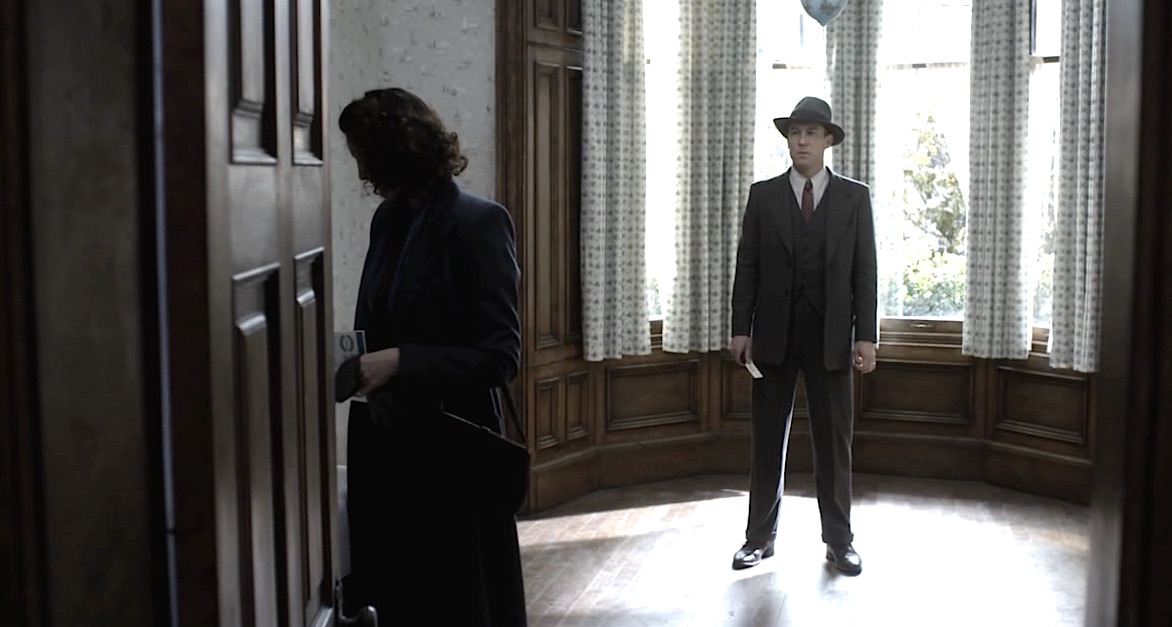 The Outlander Boston woodwork very much resembles that in an interior design project I did a few years ago in the South End of Boston. The building, a brick row house dating to the late 19th century, featured walnut millwork and trim around the windows, plus the typical Bay window: Back to Outlander Boston – this behind the scenes shot is much brighter and really shows the detail of the stage set. 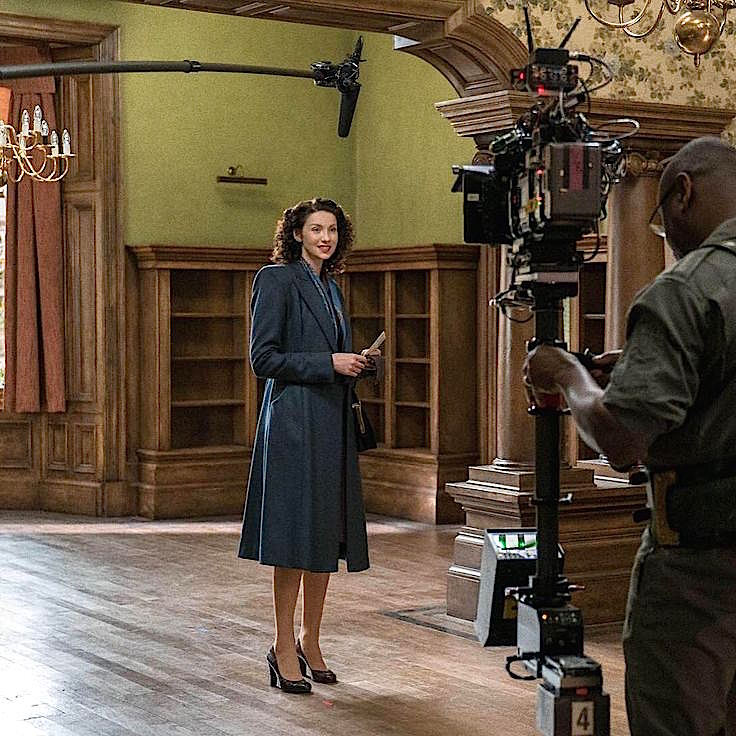 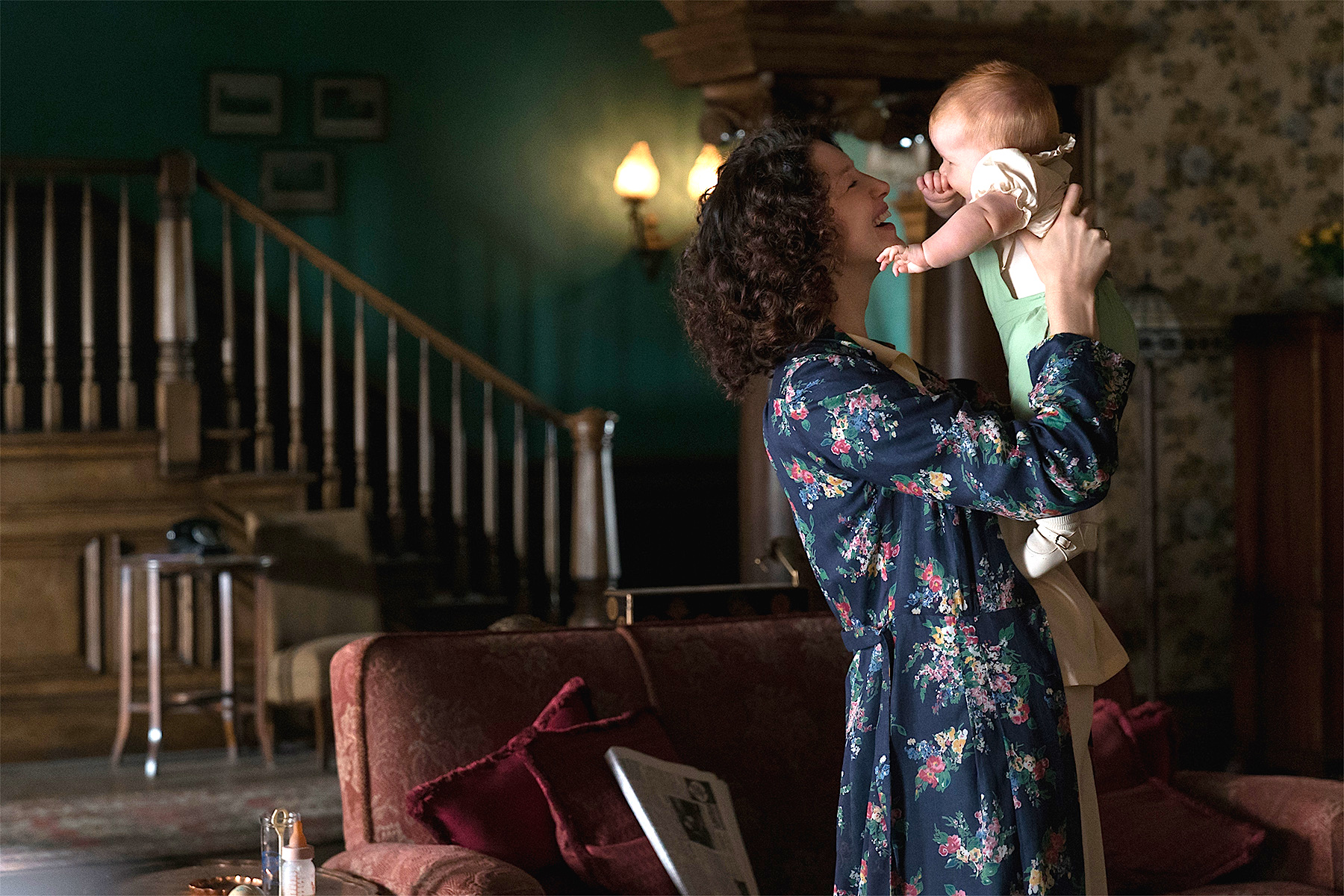 And these stills show that the house is possibly re-decorated over time. The wallpaper in the living room is different, as are the greens in the front hall. 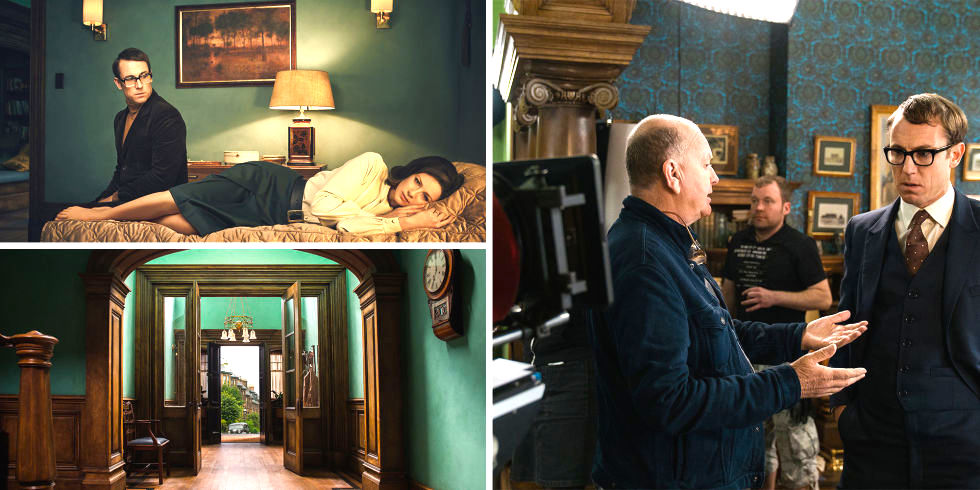 This fabulous party shot below shows a real updating of the style from where we start. Possibly this is to show the passage of time into the more vibrant 60’s from the drabber post-war 40’s. Possibly also that we can assume that Frank’s salary went up and Claire, now a doctor, is earning a salary as well. 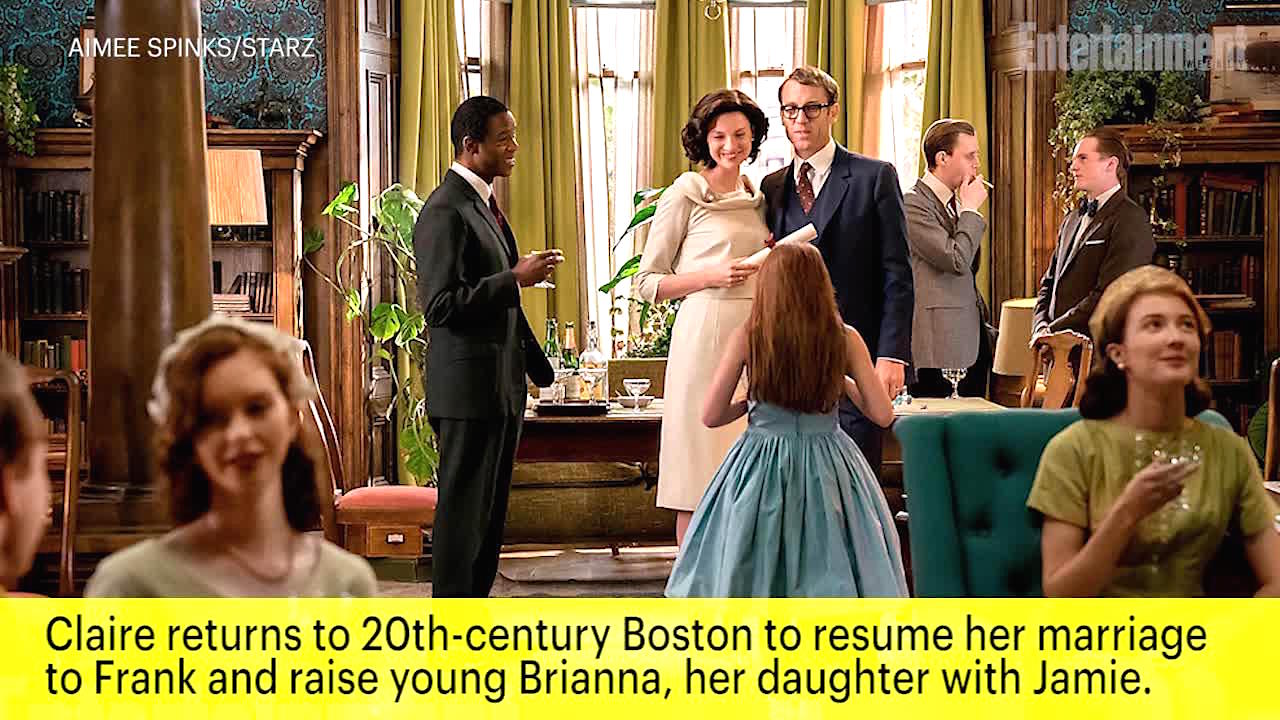 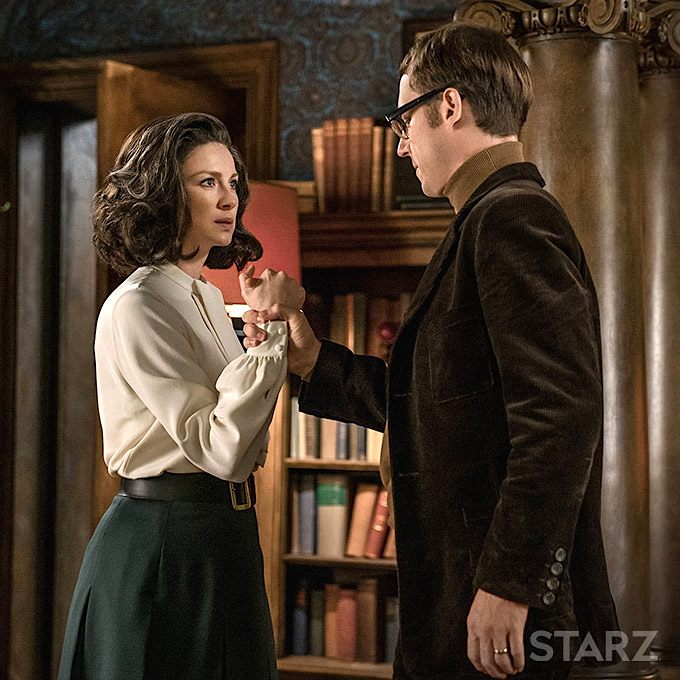 Here is a video with a tour of the apartment set with Caitroina Balfe:

I read that designer Jon Gary Steele decided to use a predominantly blue and green color palette for the Boston apartment and sets based on research into old cars from the 1940’s. And it’s clear that the costumes (designed by Terry Dresbach) follow suit (pun intended). I’m not entirely sure yet if there is any deeper significance to the color palette. As I mentioned above, in general, everything is very dimly shot and kind of dull in tone so far, which is a bit different than the lushness of the Paris sets or even the warmth of the Lallybroch locations. Or even, interestingly, the interiors of the Reverend Wakefield’s manse and the Scottish bed and breakfast of the very first episode. See my previous Outlander posts here.

The Boston of Outlander Season 3 just feels dull and bleak, almost oppressive, which is really not Boston at all (except maybe in the dead of winter, but even then it’s beautiful!) It also doesn’t square with Claire’s stated desire to become an American Citizen because American is “young, eager, constantly looking towards the future…”

Did you watch? If you’re from Boston – what were your thoughts on how our city is depicted? And if you’re not from Boston, did you notice it as I did or were you fine with the settings? I’d love to know!

On a final note – so far no fake Boston accents! That’s one thing I am very pleased about.