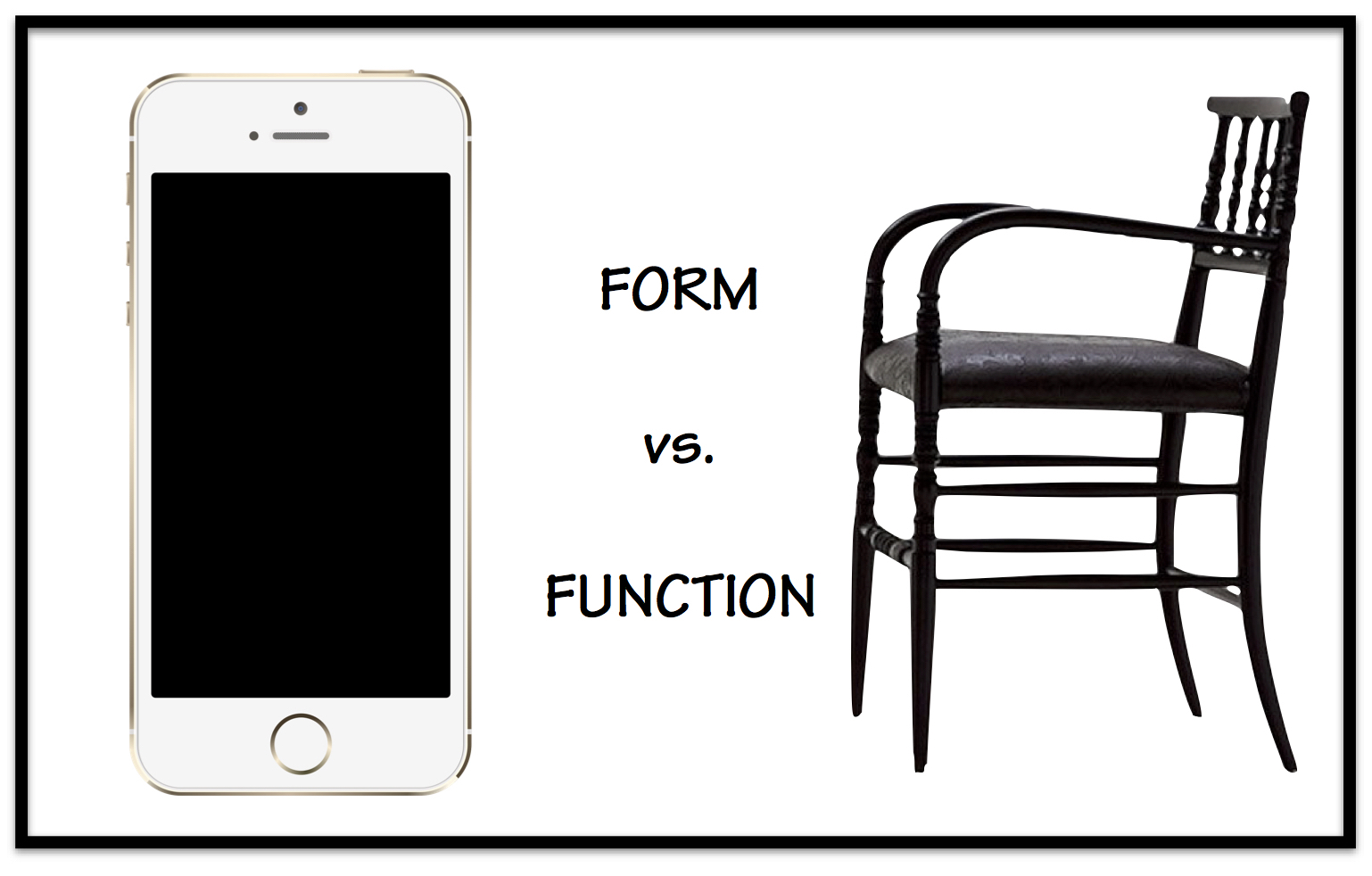 Okay, a discussion about Form vs. Function is not exactly a design smackdown, but it’s a good jumping off point for a conversation. I was recently doing some research in quotes on design and realized that two icons of design – Steve Jobs and Marcel Wanders –  had very different and very interesting views on design. 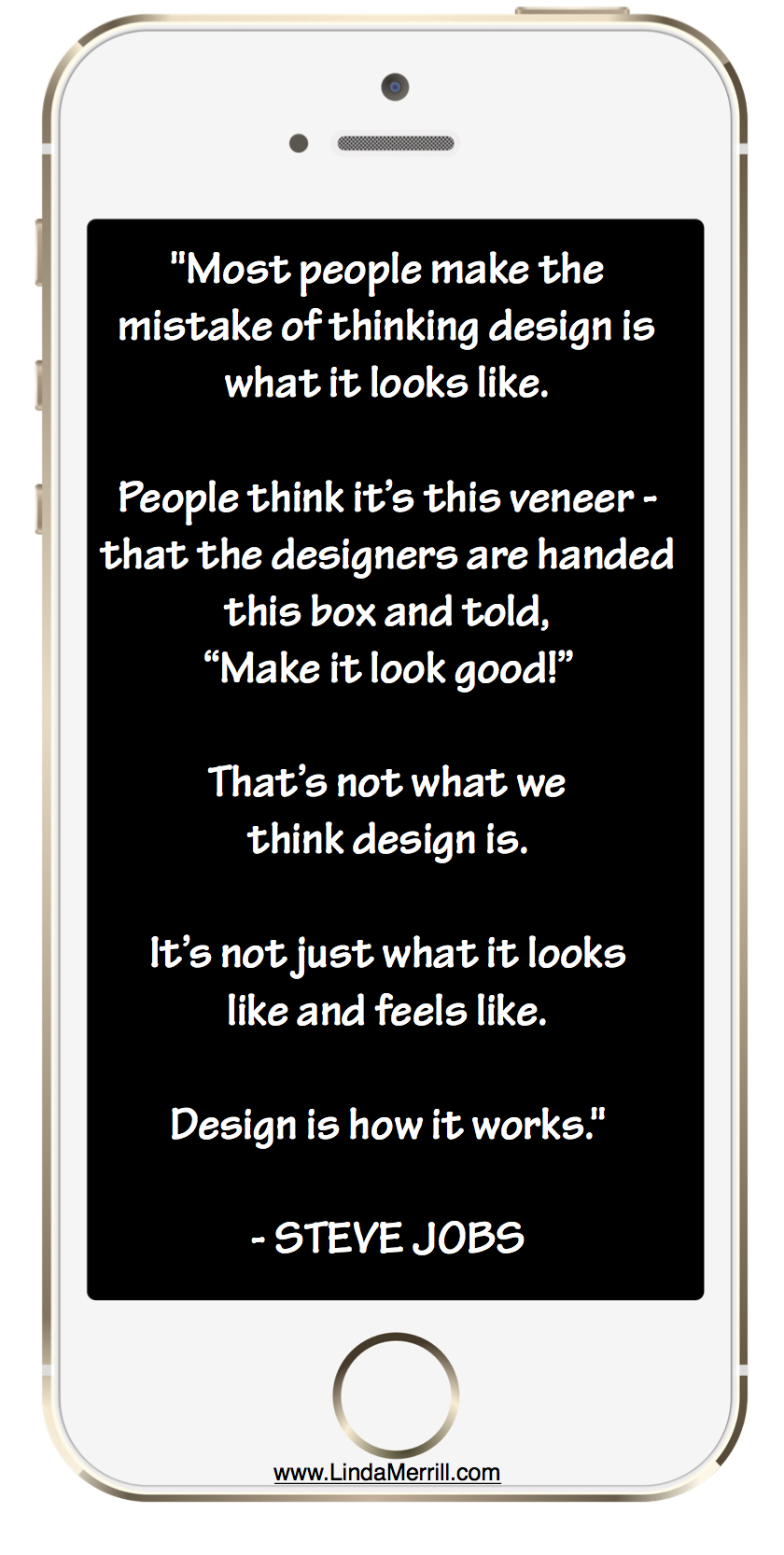 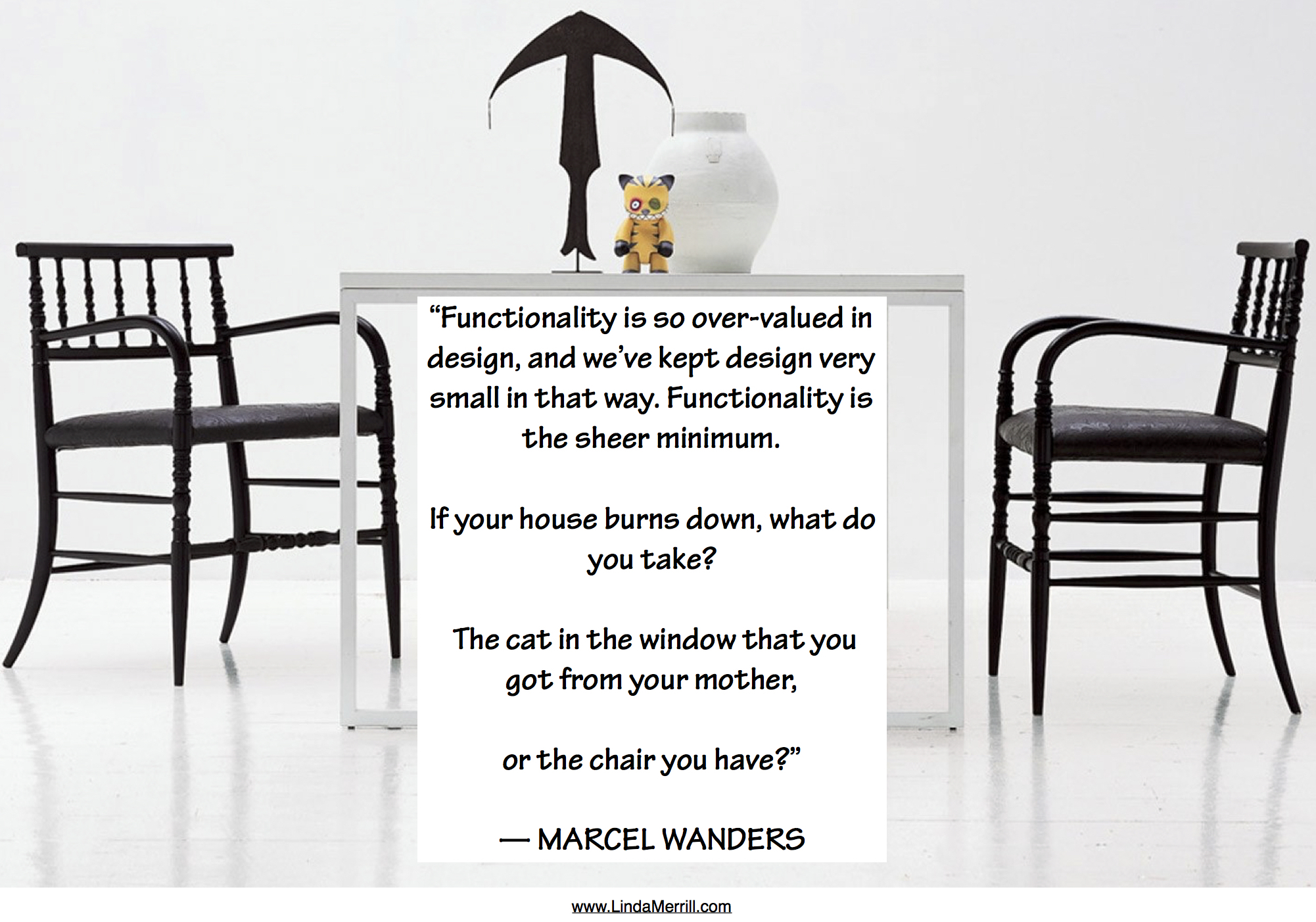 Of course, there is the famous adage Form follows function which is often attributed to Frank Lloyd Wright but was actually coined by his boss/mentor architect Louis Sullivan:

“Whether it be the sweeping eagle in his flight, or the open apple-blossom, the toiling work-horse, the blithe swan, the branching oak, the winding stream at its base, the drifting clouds, over all the coursing sun, form ever follows function, and this is the law. Where function does not change, form does not change. The granite rocks, the ever-brooding hills, remain for ages; the lightning lives, comes into shape, and dies, in a twinkling.
It is the pervading law of all things organic and inorganic, of all things physical and metaphysical, of all things human and all things superhuman, of all true manifestations of the head, of the heart, of the soul, that the life is recognizable in its expression, that form ever follows function. This is the law.“

I love a good philosophical discussion, until my head starts to hurt…

This all follows a conversation among designers on Facebook about a kitchen design project that a fellow designer just had showcased on a large website. (No names will be shared to avoid embarrassing anybody). The kitchen in question is a recent remodel of a very small kitchen and it’s a lovely, lovely job. The finishes, mix of textures and styling for the photos is impeccable. It also appears that they carefully planned out the minimal space for maximum efficiency. I’d love to walk into that space every day. But, the thing is – it’s missing a very important and standard element that one usually finds in a kitchen. There is no ventilation hood over the range. Ventilation hoods are required in some jurisdictions and not in others, so one assumes this designer wasn’t legally required to have a hood. There are windows in the space, so perhaps that’s why ventilation isn’t required. It also doesn’t appear that the range has integrated downdraft ventilation.  So, this begs the question: is it good design if the space is pretty and presumably answers all the functional needs of the occupant yet is lacking a normally very important aspect of a kitchen space – the ability to remove grease particles, steam and food smells from the kitchen and house itself?  And, even though it’s probably legal where the project is, do publications which are showcasing “good design” have an obligation to uphold the highest standards and only show projects that are subjectively beautiful AND objectively functional? My own condo kitchen makeover included a simple, utilitarian vent hood (which is a code requirement where I am). A tiny space that got a big makeover a few years ago.

So, what are your thoughts on form vs. function? I personally feel that as a designer, my job is to integrate both into every design. If a space isn’t functional, if it doesn’t work as it should, if it doesn’t make the occupants lives easier, then there is something lacking. I often will harp on functional needs with clients (who are usually more focused on aesthetics) and try to keep decisions based on current needs, future needs (such as resale) as well as beauty. Because if it’s not beautiful, if it doesn’t touch the soul in some way (maybe not to the level of Mom’s cat, but you know what I mean) then it’s also lacking. We need both. From Jobs’s perspective – design is all encompassing – form and function are necessarily intertwined and one cannot be without the other. From Wanders’s perspective – functionality is the starting point, the obvious first step onto which beauty and meaning are layered. This view means, of course, that they are separable.

I’d love to hear your views on form vs. function.