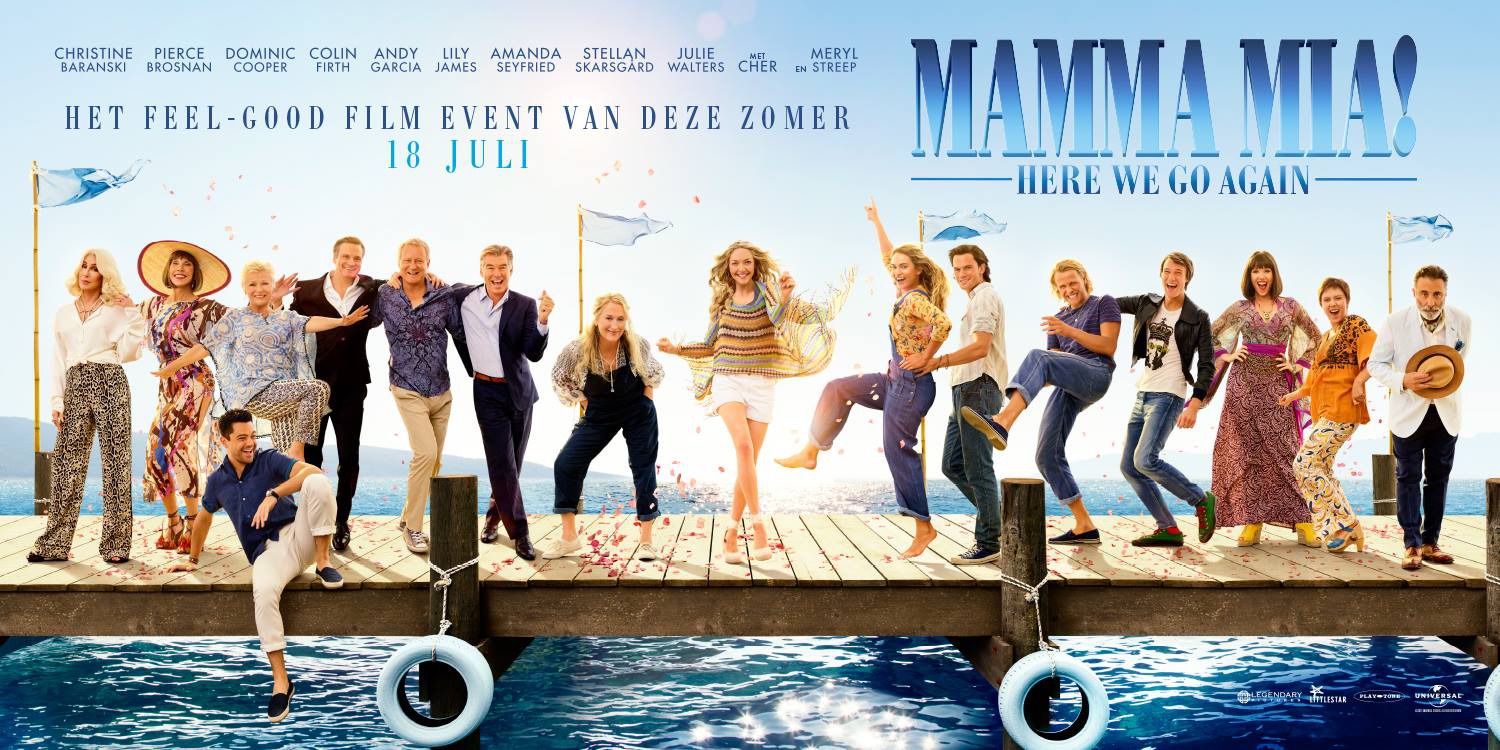 It’s been ten years since the sounds of ABBA have wafted out of the Greek island of Kalokairi and onto the big screen – and here we go again! I blogged about the original Mamma Mia ten years ago, but with one thing and another, the blog post went missing. So, I figured I’d do a quick visual recap of the 2008 movie and share the images I’ve been able to find from the new Mamma Mia: Here We Go Again . The movie is being released here in the States on July 20, 2018.

It goes without saying that the setting is just simply amazing. The movie is worth the price of admission just for the gorgeous surroundings. And even if he cannot sing, Pierce Brosnan… 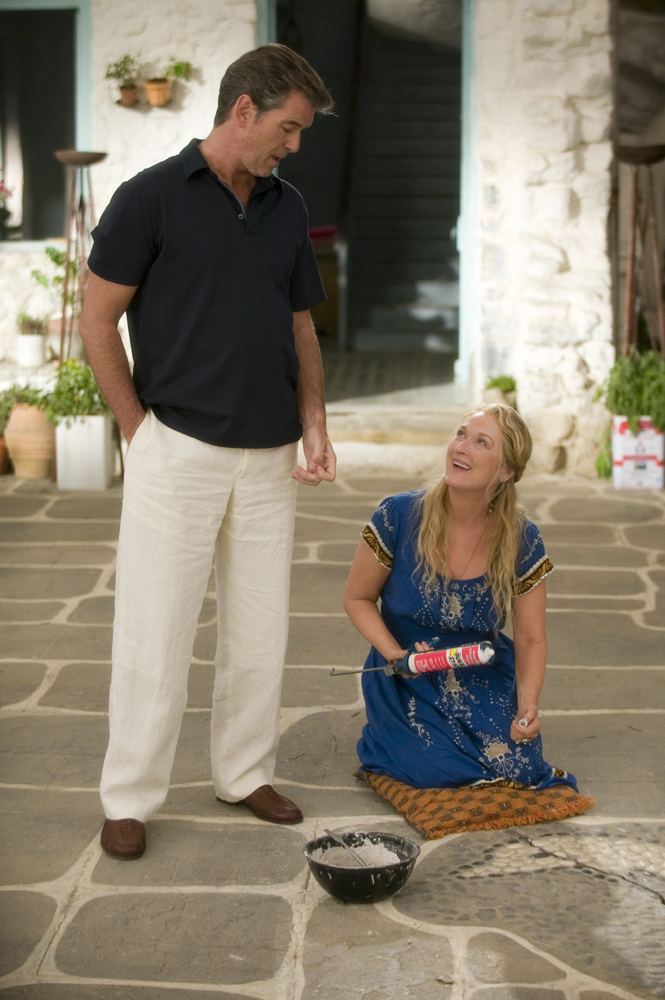 The story brief is that single mom Donna (Meryl Street) has been running a dilapidated hotel on the island ever since she had her daughter Sophie. The hook, of course, is that the father could have been one of three totally dishy men she met that summer – which we learn about when Sophie (Amanda Seyfried) breaks into her Mom’s diary. 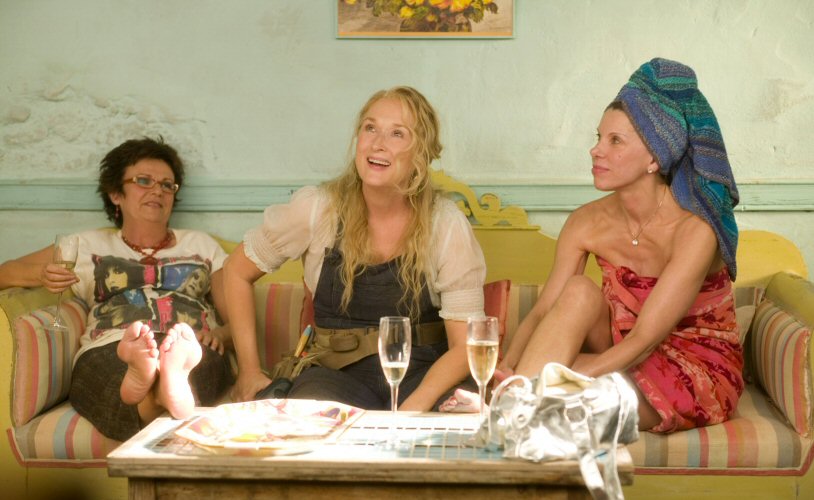 Donna has her two best friends, played by Julie Walters and Christine Baranksi. This movie may not be everyone’s cup ‘o tea – but the cast is stellar. (Lack of vocal skills aside). 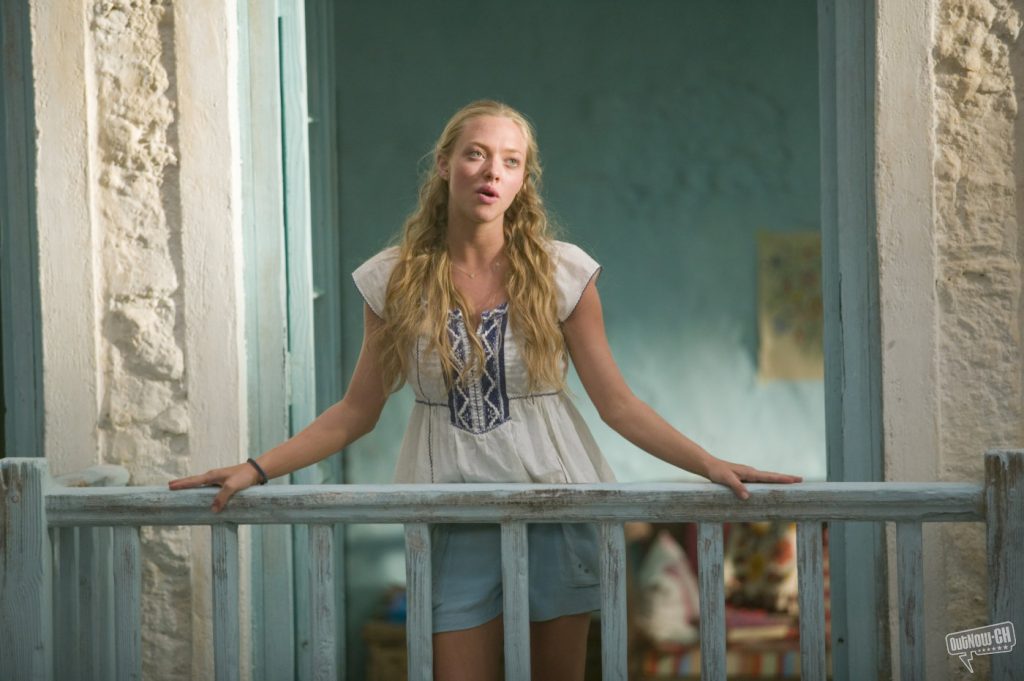 The colors and textures are gorgeous. 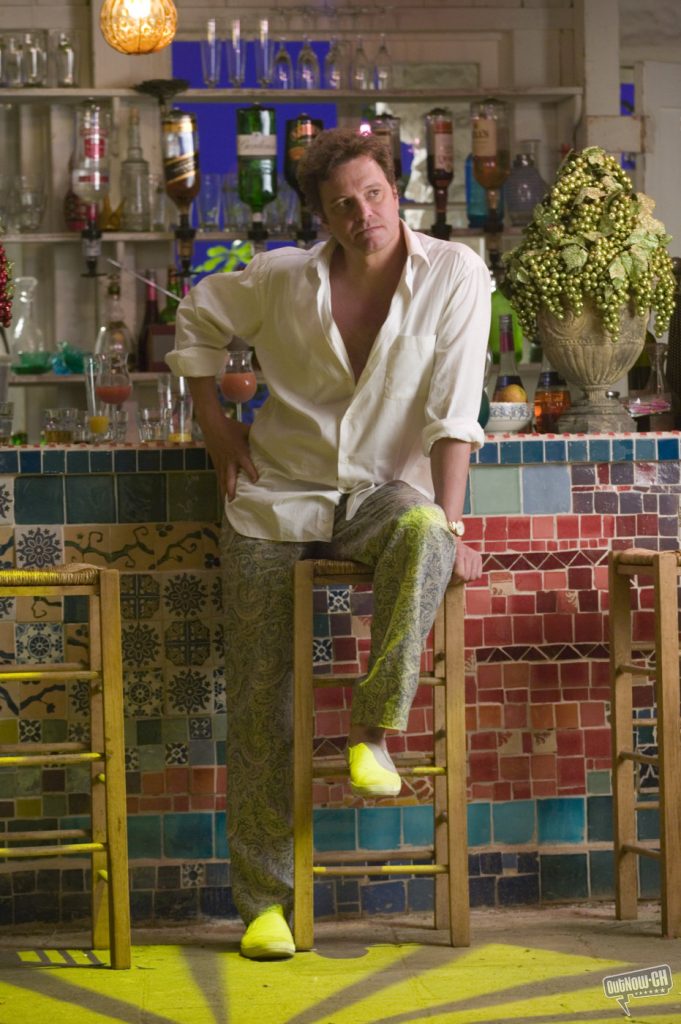 You can kind of imagine Donna painstakingly applying these mismatched tiles on the bar just hoping they stay up. 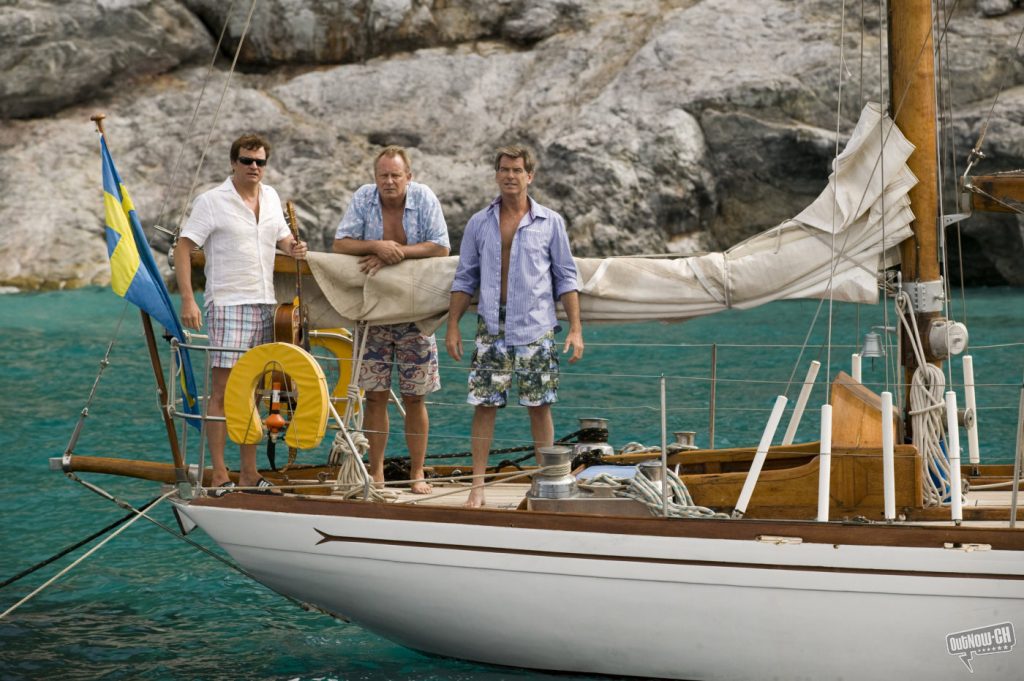 Colin Firth, Stellan Skarsgård and Pierce Brosnan on a yacht.  As I said – dishy! 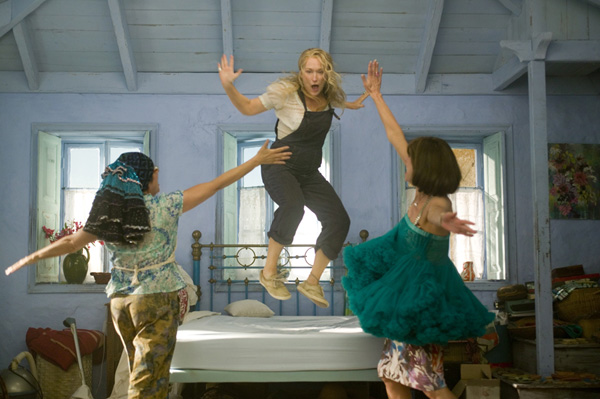 The interiors scenes show just how rundown the inn really is – which is part of the story as Donna tries to keep up with repairs. Sophie and her fiancé Sky (played by Dominic Cooper) are trying to help by doing what kids to – take to the internet and create a website to improve the reservation rate.

Aren’t these colors just divine? The set decorator Barbara Herman-Skelding created a palette that is rich yet still breezy, using a lot of Josef Frank inspired fabrics and prints. Mixing a Scandi design vibe with Abba is pretty brilliant, no? On a side note, Herman-Skelding also just worked on the Showtime mini-series Patrick Melrose which also has some amazing sets, especially the French Country House which features prominently in the show. 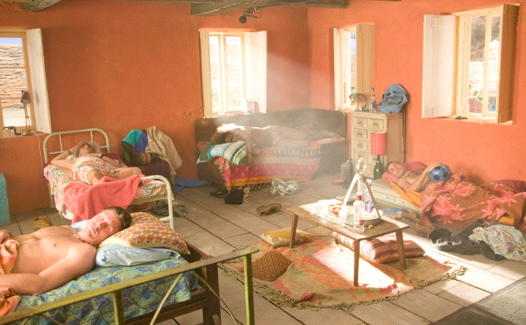 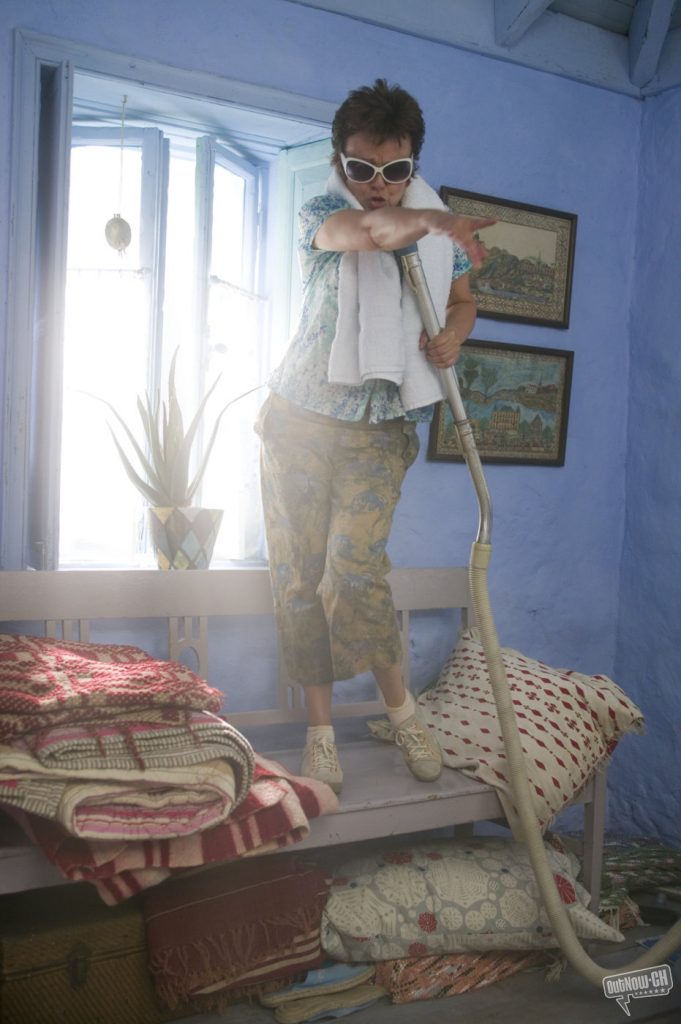 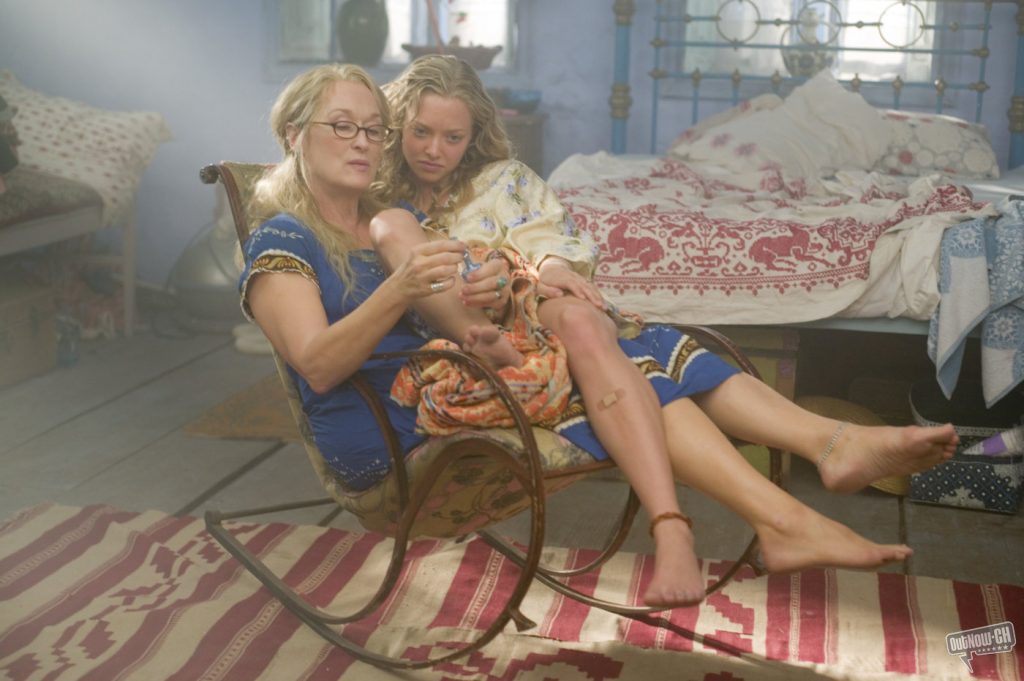 Who’s your daddy? Well all three are happy to take on the role – lucky Sophie! 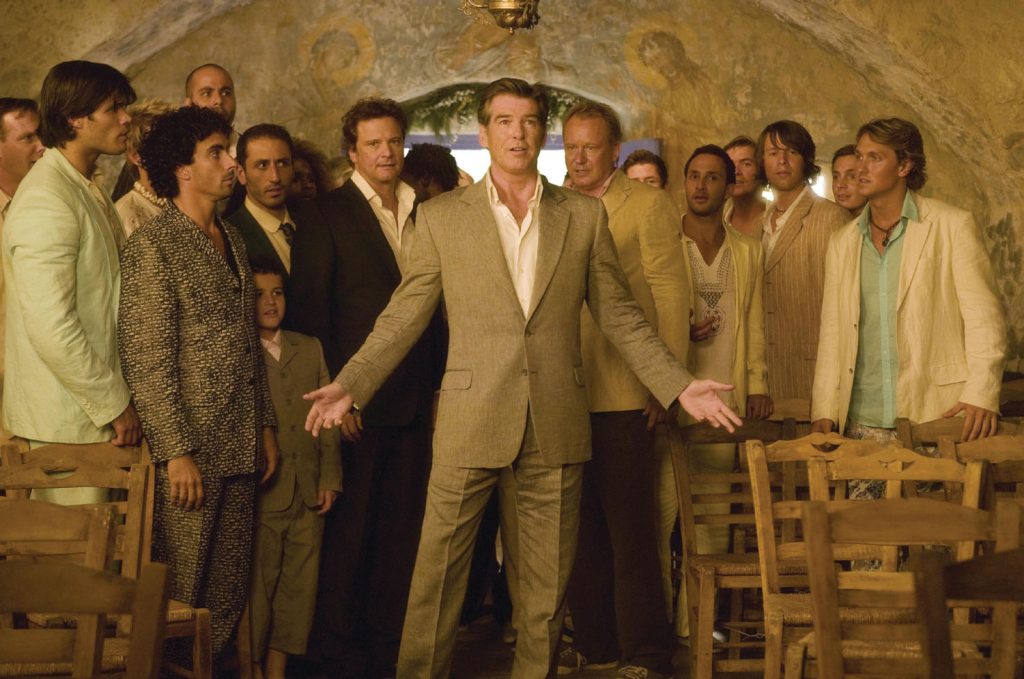 Jump ahead to 2018 and, here we are again back on the gorgeous Greek Island. Now – did a sequel need to be done? Or this is a prequel? The first was of course based on the popular stage show, but the new movie takes the story and looks both back and forward.

The original principal cast has all returned, but it’s not clear just how big a role Meryl Streep’s Donna has in present day. Of course, movie trailers can be deceiving, but, let’s just say, the character features prominently in the 1970’s (Donna is played by Lily James) and focuses on how she met the three potential Dads.  It looks fun and equally a visual feast as the first movie. For this go ’round, the set decorator is Dominic Capon who has worked on notable movies such as In the Heart of the Sea and Justice League. The sets, from what little I’ve been able to glean, look beautiful – and notably a little more luxurious and in better repair. Apparently Sophie and Sky have taken over the running of the Villa Donna and are making a go of it. But, where is Donna?

The movie looks to jump back and forth between the origin story of where Donna and her girlfriends come from, how she met the three guys, and what happened when Sophie was born. 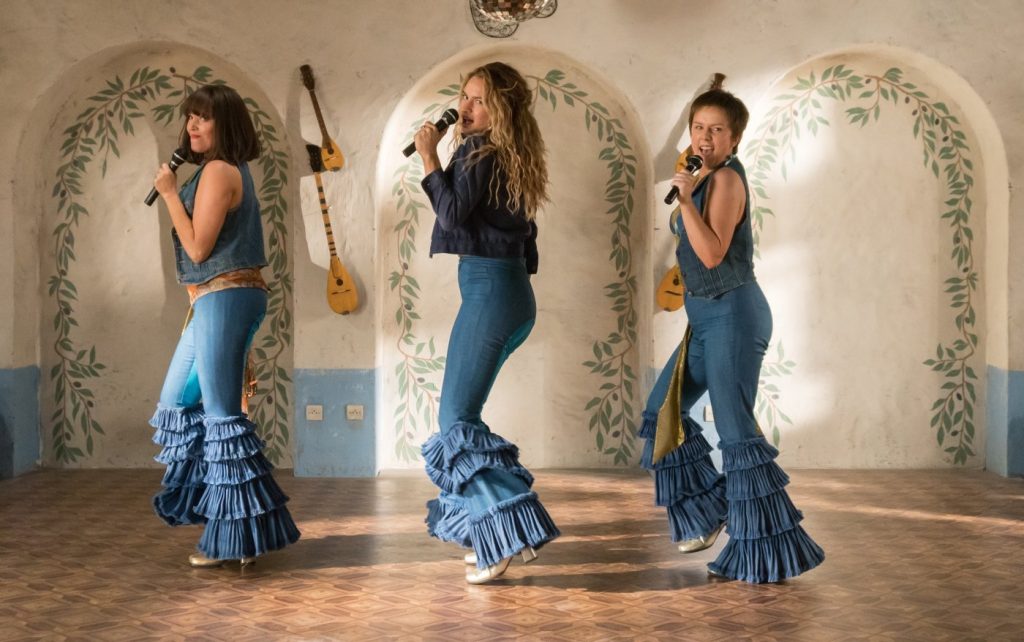 The actors portraying the younger versions of the principal characters all look really good. 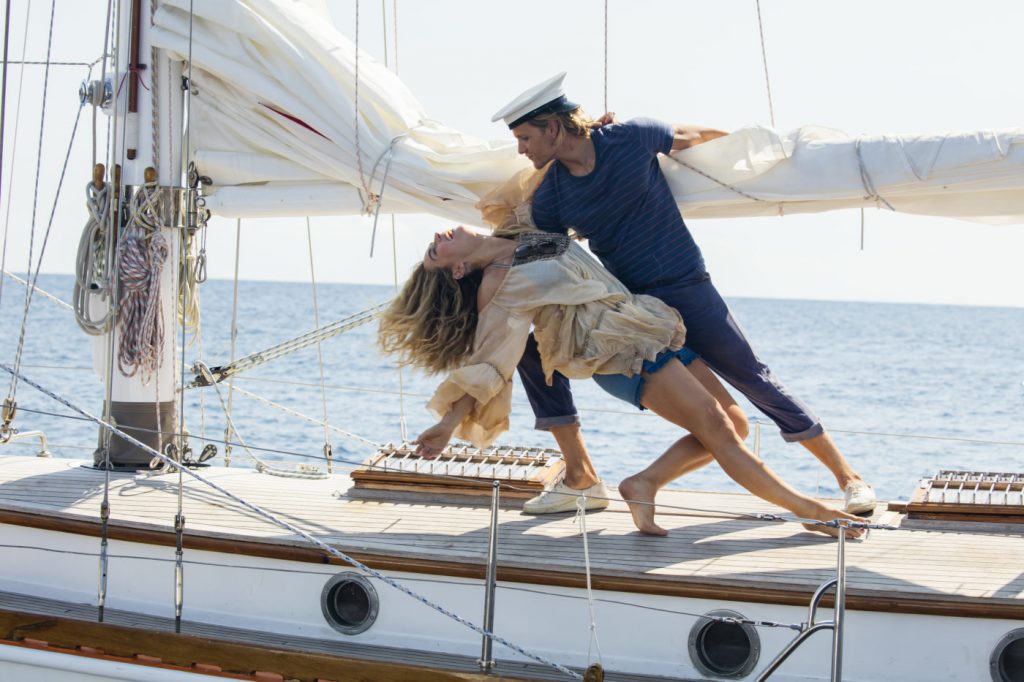 And there’s the yacht! I wonder if they explain how young “Bill” came to own such a gorgeous vessel?

Moving to modern day – we have Donna’s two besties, Rosie and Tanya prominently showcased in the trailers. And, Sophie has announced she’s pregnant. (Not a spoiler, it’s in the trailer).

Villa Donna has had quite an upgrade! I’m very excite to see how the sets have changed. It was hard to get photos at this point. 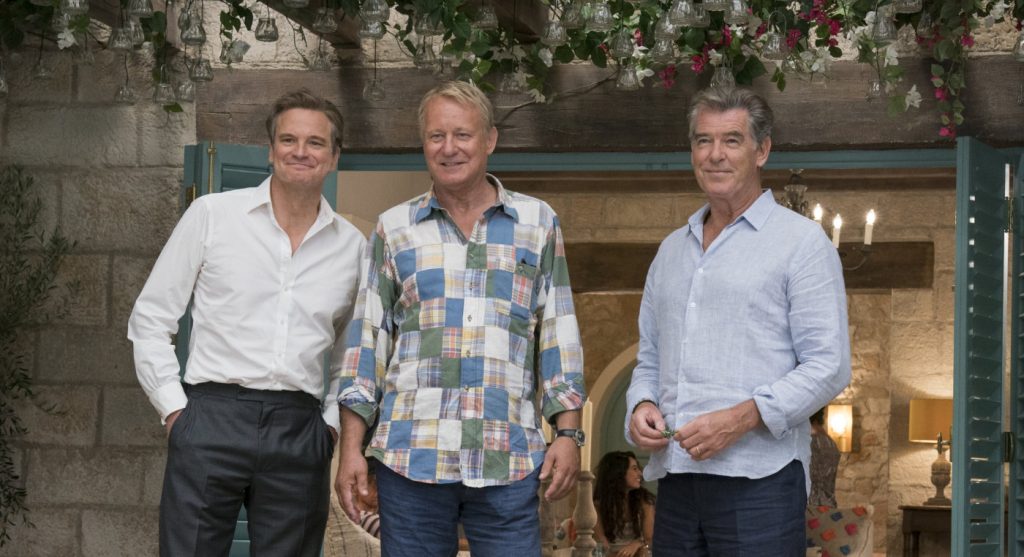 These men… I’m usually a stickler for actors who can’t sing, but in this case… humanahumana 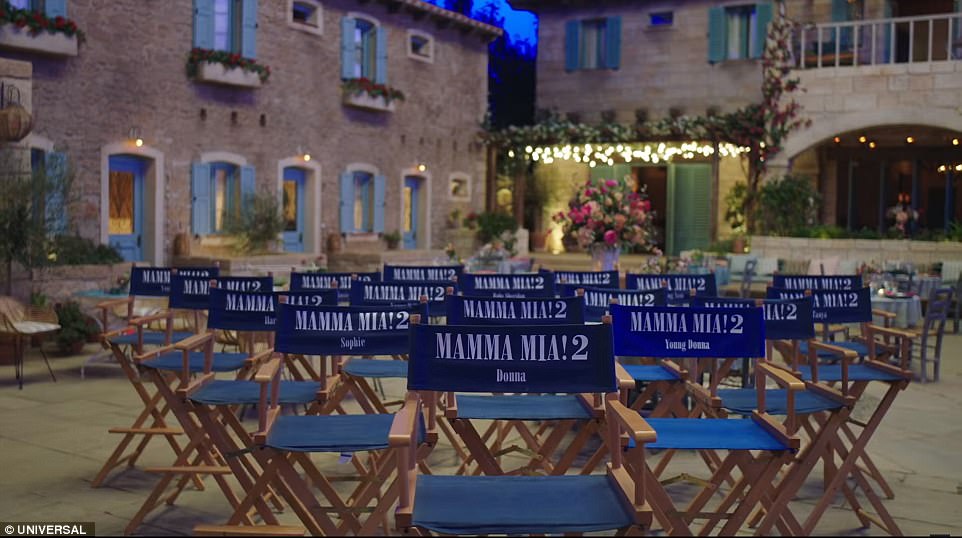 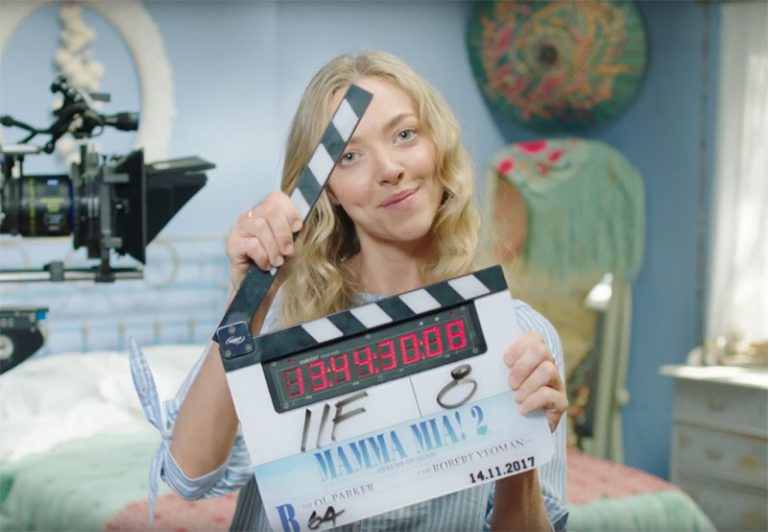 This post is part of my long-time Silver Screen Surroundings series.