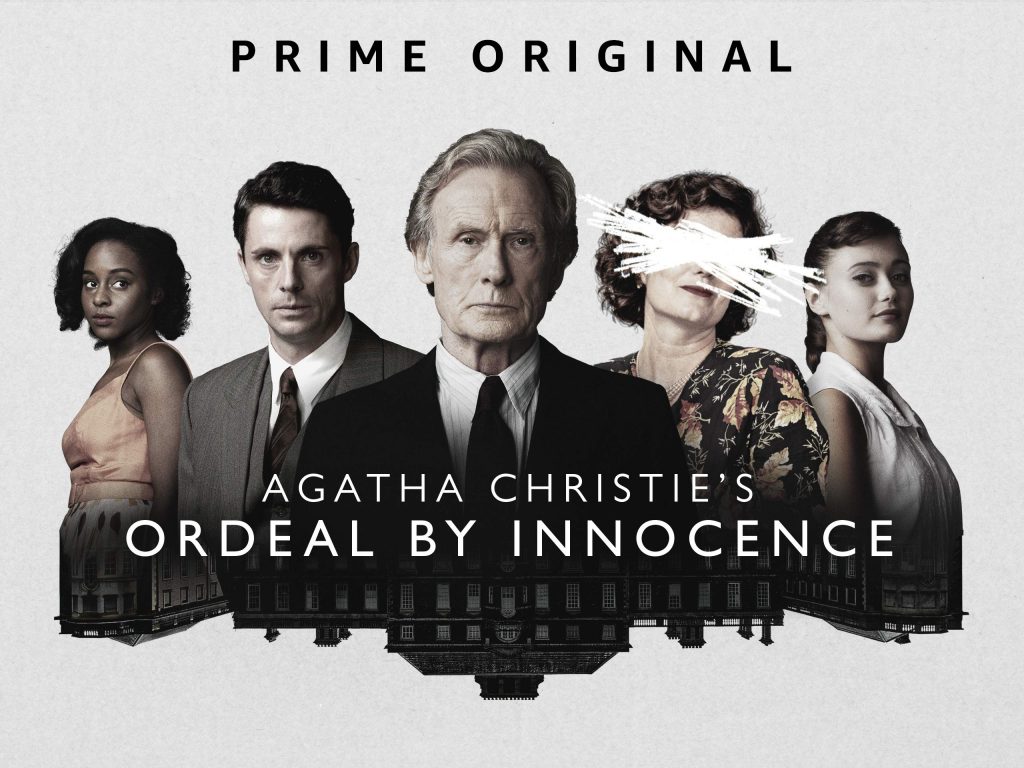 I watched the new BBC production of Agatha Christie’s Ordeal by Innocence last week, which is available on Amazon Prime Video. Set in the 1950’s, the story centers around a wealthy family, the Argyll’s. Matriarch Rachel Argyll is some kind of philanthropist who can’t have children, so adopts five children, plus one super hard-working housekeeper who has been part of the family since her teenage years. Rachel is cold and domineering, trying to mold perfect children out of her collected group in ways both nasty and terrifying. Leo Argyll comes across as the kinder, if more distant, of the pair. This show actually mirrors HBO’s Sharp Objects in theme.

As the story goes, Rachel is brutally murdered one Christmas Eve in her bedroom. One of the sons, Jack, is immediately pegged as the suspect, due to his difficult personality and trouble-making ways. He’s pretty much immediately convicted and dies in prison a few months later. The show starts 18 months after Rachel’s murder on the weekend of Leo’s remarriage to the much younger Gwenda, who was his secretary and with whom he was having an affair while Rachel was still alive. The four remaining young adult Argyll children have a variety of responses to the present situation from self-harm, to emotional distance, fury and a naiveté that seems somewhat unlikely. Suddenly, a young man appears saying he had given a ride to Jack the night of the murder at the time of the murder, which, if true, would mean that Jack didn’t do it. And, in true Agatha Christie manner, if Jack didn’t do it, then who did? 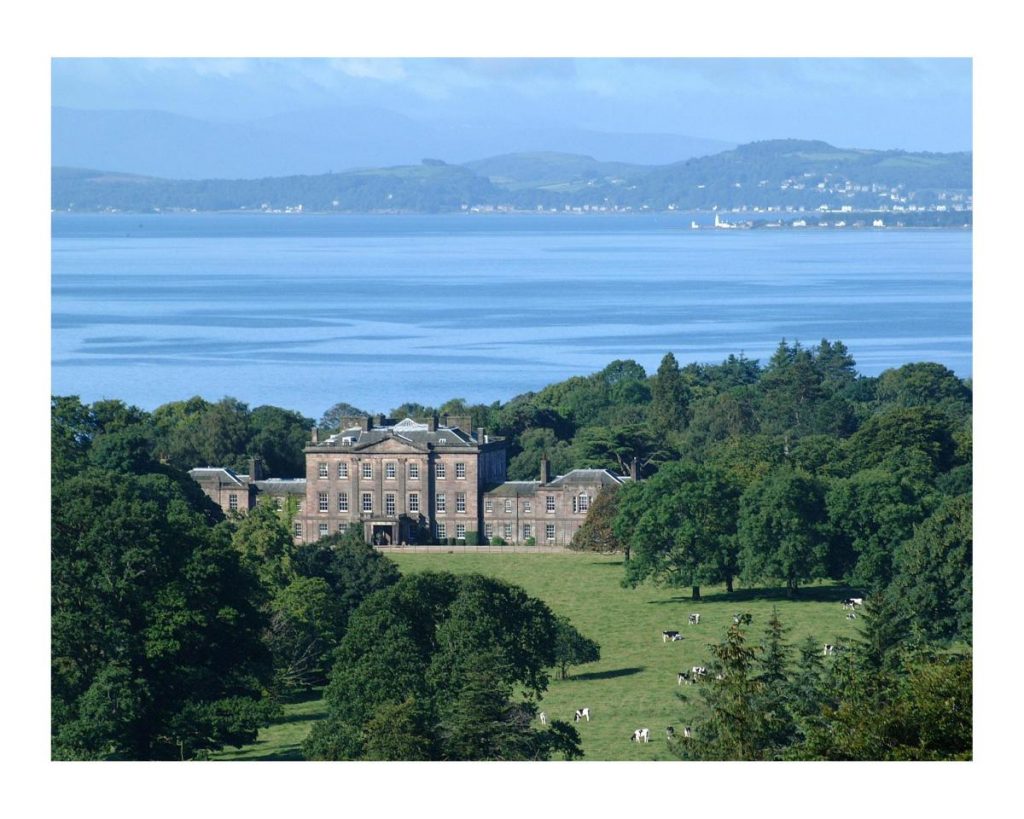 Through a series of flashbacks, we see the damage that Rachel did to her children and we’re left believing that any one of them could be the culprit. I wasn’t at all familiar with the book and story, which was fun because I didn’t go in with any knowledge. It’s also notable that they changed the story ending and the murderer from the book, which would have been a big surprise to those who knew the book. As with Murder on the Orient Express, everyone and anyone could have done it, though this story is much darker and there isn’t a whole lot of sadness for Rachel.

Critically, I can say that they probably could have taken two episodes to tell the story versus the three in the series. There is a preponderance of repetitive flashbacks, ticking clocks and dripping blood. All that said, the acting is well done, the costumes are gorgeous, and, to the point of this blog post, the setting is amazing.

Ordeal by Innocence was filmed at Ardgowan Estate in Scotland, a late 18th century mansion. Like many beautiful old homes in the UK, Ardgowan is available for rental, weddings, special events and filming. And, much like Highclere Castle in Downton Abbey, Ardgowan got a much needed influx of cash from the production which has gone into updating the estate. From what I’ve read, the production did quite a lot of updating on its own – from new carpets and wall colors, to furnishings, window treatments, etc. brought in for the filming. Notably, the actor originally set to play Michael Argyll, one of the Argyll sons, was accused of sexual misconduct after the production had finished filming. The BBC originally postponed the Christmas air date and then after more allegations came out, decided to recast and reshoot. They ended up reshooting 35 scenes over the course of 2 weeks or so. This meant they had to redress the house to match the original, bring on the furnishings again, etc. I read that they were happy the owners liked the new paint colors and carpets, because they hadn’t ripped them out, which would have meant re-doing all of that as well.

Anyway, that’s a long exposition so I can share images from the show and also from the estate itself.

Several scenes take place in the conservatory, including this flashback to the schooling Rachel gave the five children. Seems an idyllic place, on the surface, which is sort of the theme of the story.

The Conservatory – Ordeal by Innocence

Moving forward, Jack hidden in the back middle, is causing trouble for his mother and the local constable, though it’s clear his issues stem from something very serious indeed.

And then in the present day of the story, a nervous Dr. Calgary has come forward offering an alibi for the doomed Jack, who has already died in prison.

Dr. Calgary and Leo Argyll (Bill Nighy in a very controlled performance) in the conservatory.

Sisters Christina (Chrystal Clark) and Mary (Eleanor Tomlinson) square off on the conservatory. Mary is all fury and Christina, aka Tina, is distantly removed from emotion.

The Dining Room – Ordeal by Innocence

After the flashback to the murder scene, the show starts with the introduction to the Gwenda character (the soon to be new Mrs. Argyll played by Alice Eve) as she swans about the house making sure everything is just so. Initially, it’s not clear who she is, but she sure seems in charge, at first.

A closeup featuring Eleanor Tomlinson and the detail of the drapery fabric.

From the Ardgowan estate website, we see a bridal photo taken in the “dining room” (Note, it’s not the actual estate dining room).

And another shot of a wedding dinner set up as this is actually an open space available for rental and setup as needed. 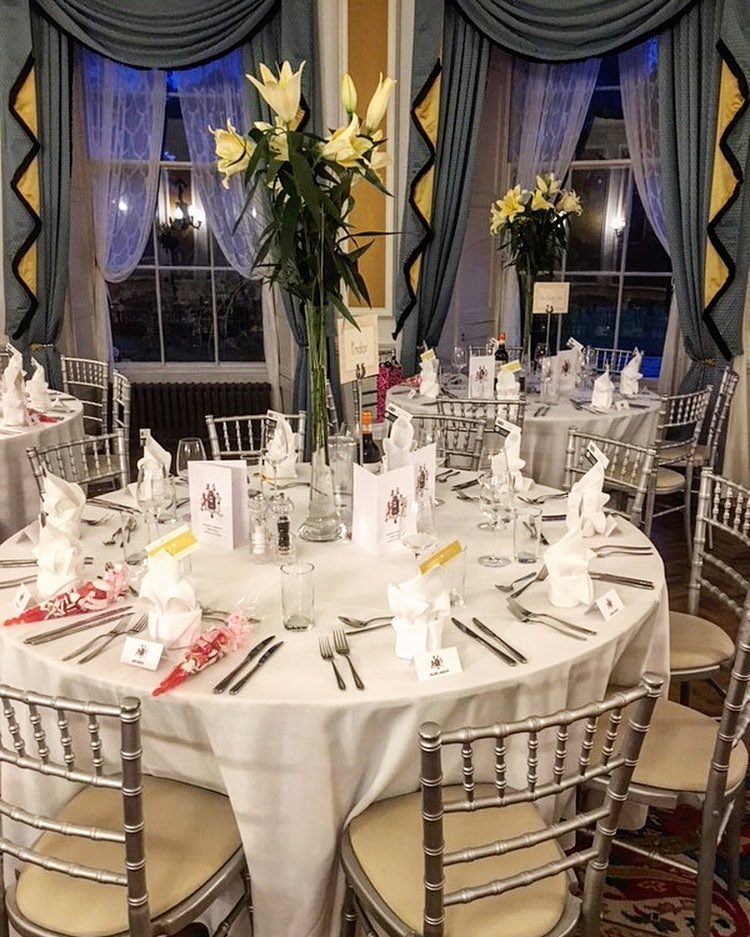 And here’s an empty photo of the room. Note the jib door to the right of the fireplace. It’s also visible in the screen grab below of the dining room, except that the bas relief panel above the fireplace was replaced with a piece of modern art for the production. 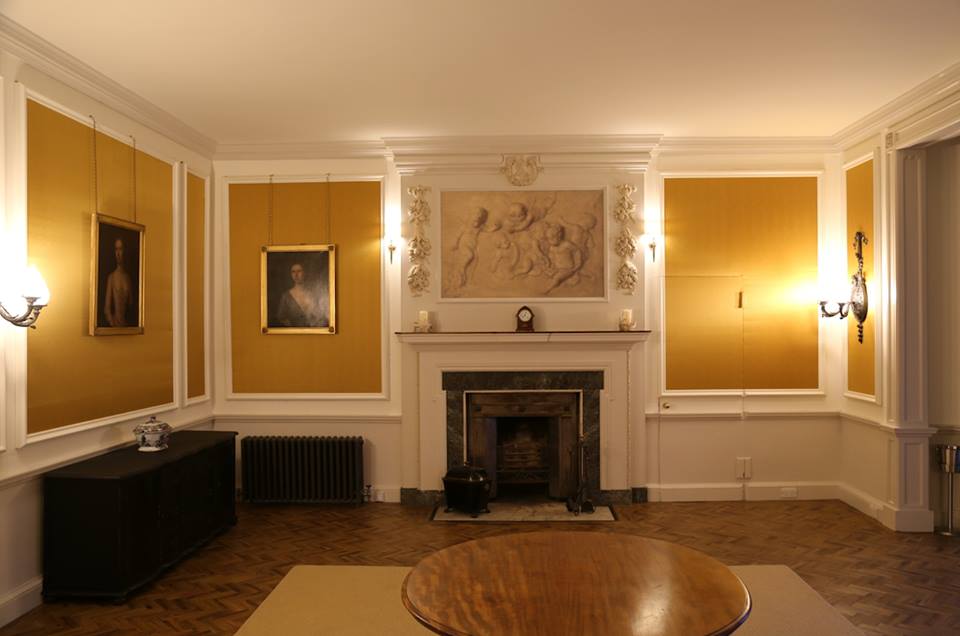 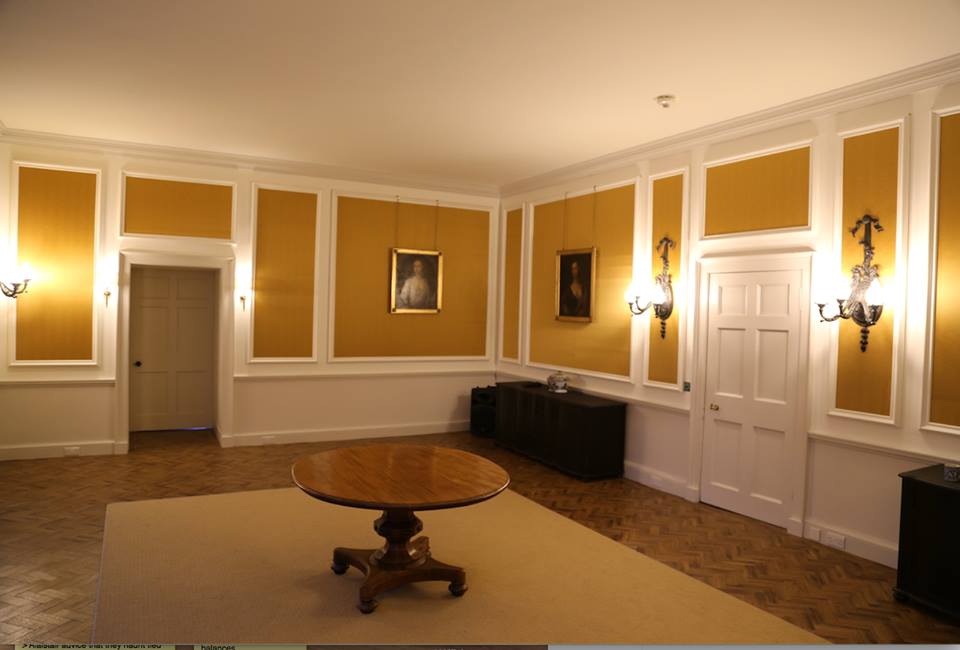 The Main Entry Hall as viewed from the stair case. This space provides the setting for many scenes an uses – from entry to party space to music room.

Views looking towards the stairs.

The color looks different, but this is the same space, with painted or papered panels adorning the walls above the wainscot.

Thanks to a reader question and subsequent research, I found out that the wall panels added to the front hall above are copies of the frescoes  found at the Villa of Livia. 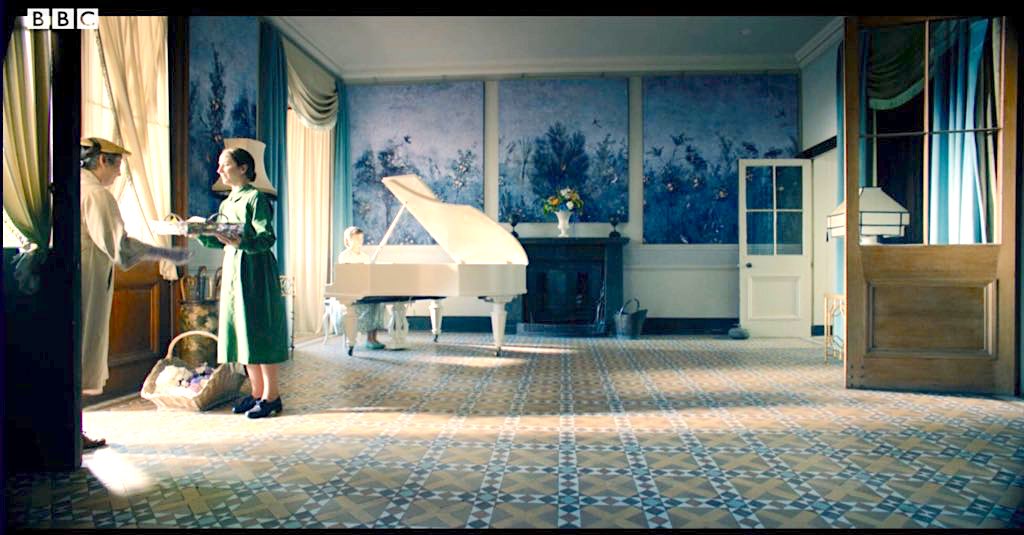 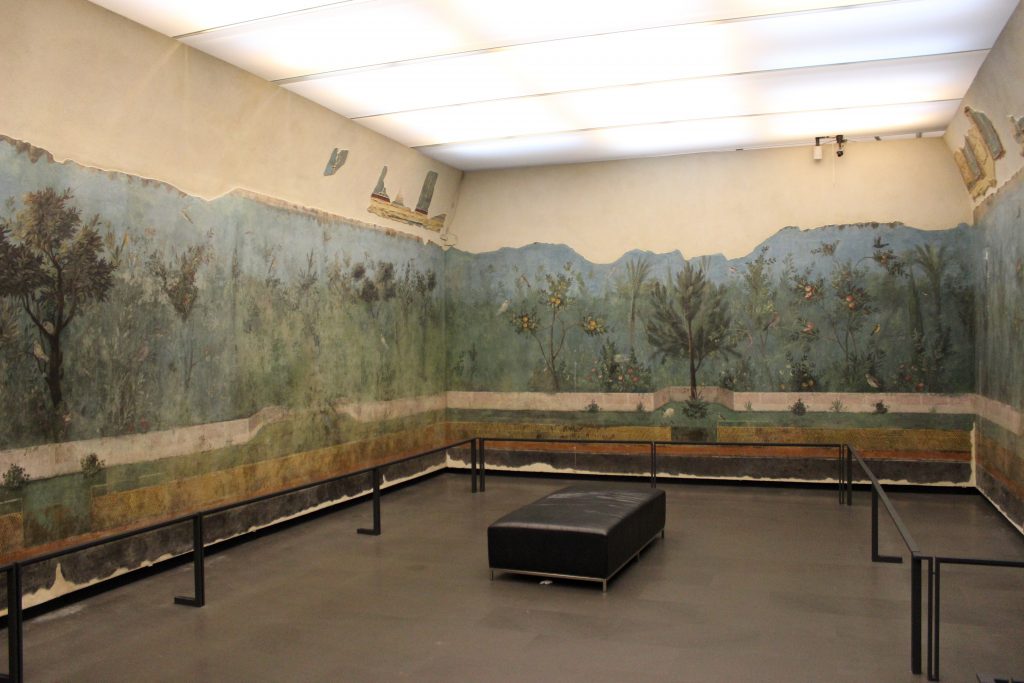 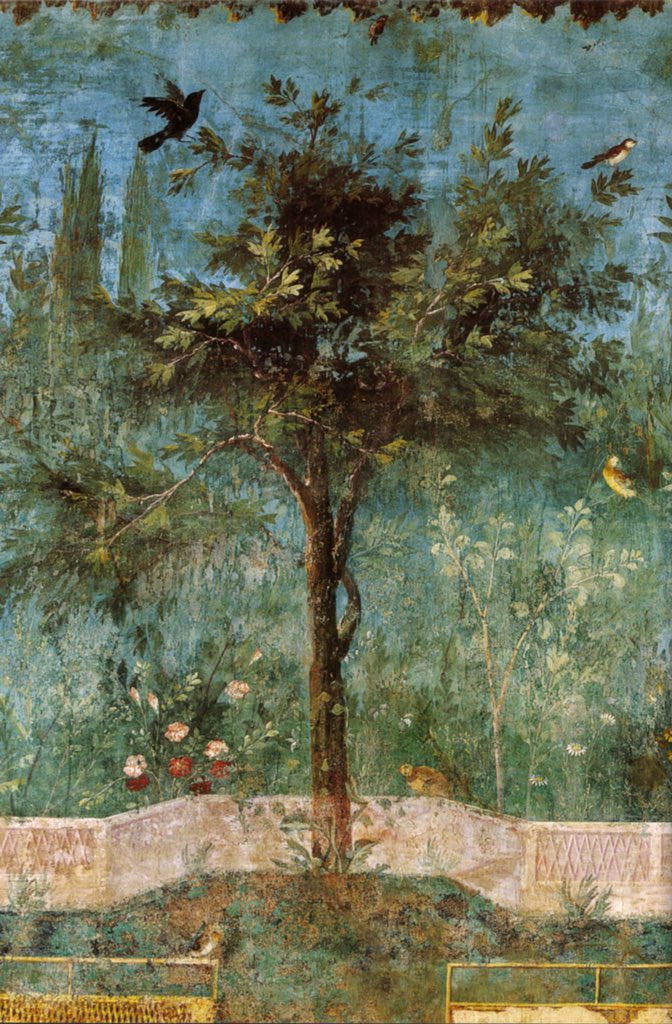 The Staircase – Ordeal by Innocence

The staircase plays a very prominent role in the movie, with many scenes taking place on all the different levels. Above is Gwenda at the beginning looking up at Rachel’s very prominent portrait which looms large over everything, as does the ghost of Rachel.

The yellow dress in Rachel’s portrait calls back to the dining room, with blue and yellow being very predominant color schemes. She is also wearing this color when she’s murdered. It’s a way of showing how present Rachel still is, breathing down everyone’s neck, even after death.

The Willow Room – Ordeal by Innocence

My favorite room in the house is the “Willow Room”, which is used as a bedroom/rehabilitation room for daughter Mary and her husband Philip Durrant.  Played by Matthew Goode (who I’ll be honest, was over acting a little bit), Philip is an alchoholic/morphine addict who was crippled just before Rachel was murdered. So, we always know he’s not a suspect, even though he’s a miserable, nasty person. A brief reference to his being drunk at their wedding indicates his problems have been around for a while and aren’t just a bi-product of his car accident.

It’s not explicitly said, but it’s clear that this pretty room was meant to convey a first floor room in the house which was converted to a bedroom after the accident. There’s a harrowing scene where medics are lifting his stretcher up the steep stairs after his accident which highlights how untenable that situation would be.

In any event, such a pretty room!

Here is a “before” photo of the room with it’s original wallpaper and billiard table. 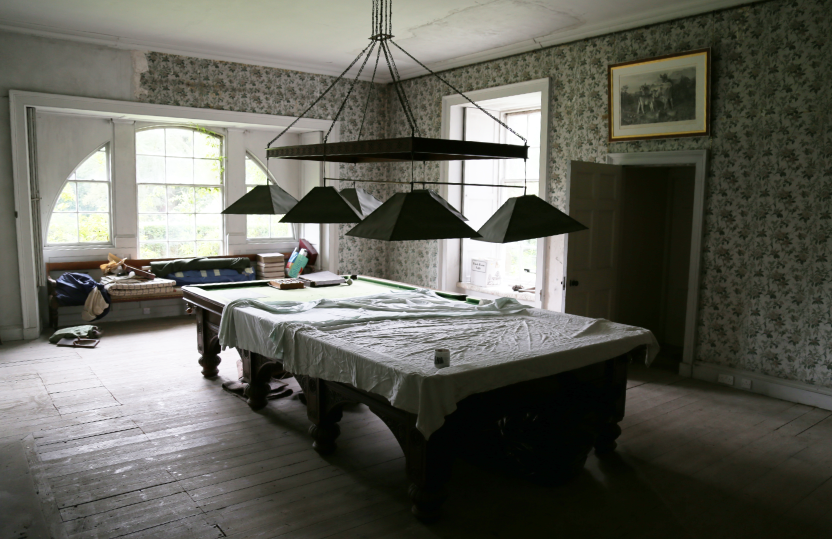 The weeping willows are hand painted. 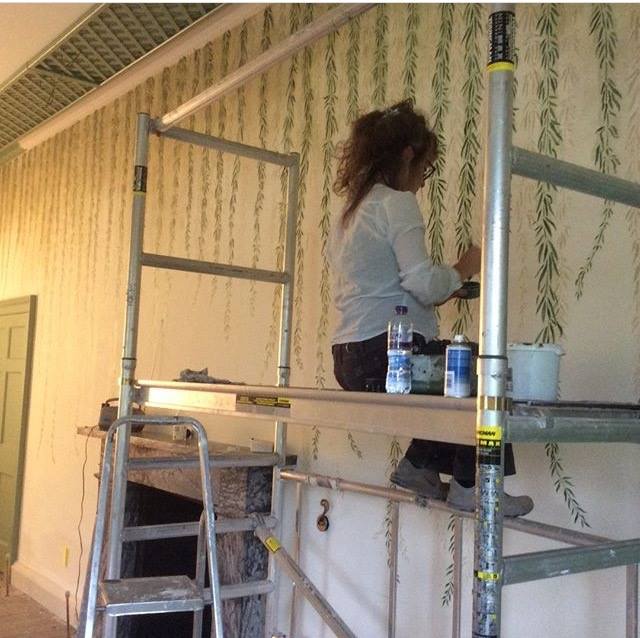 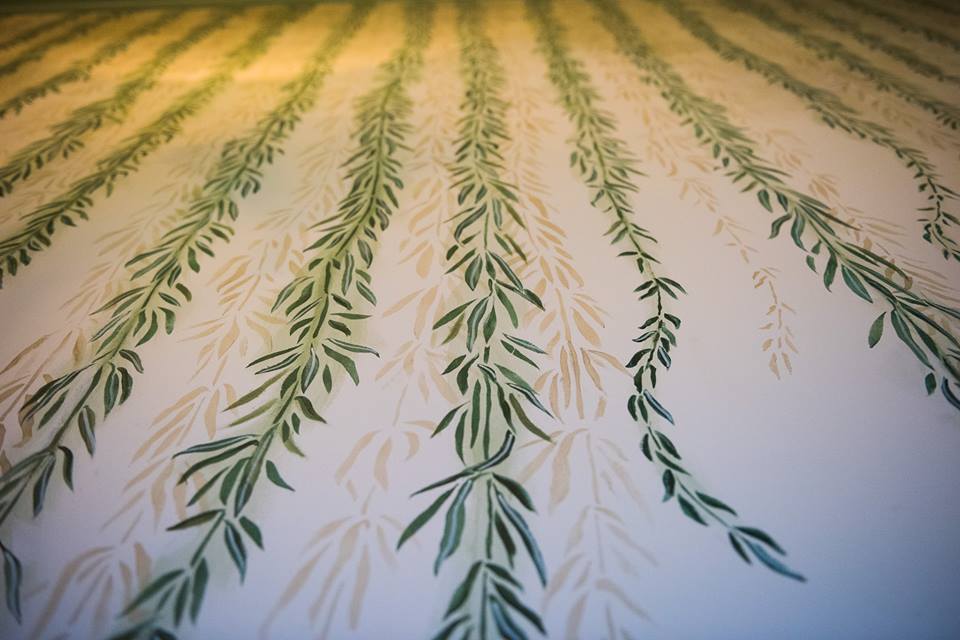 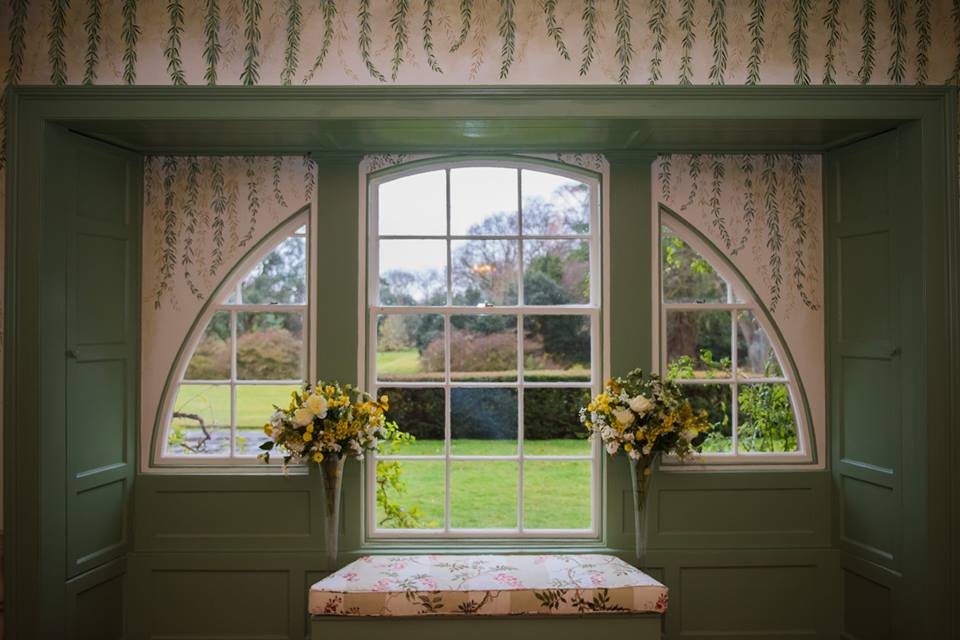 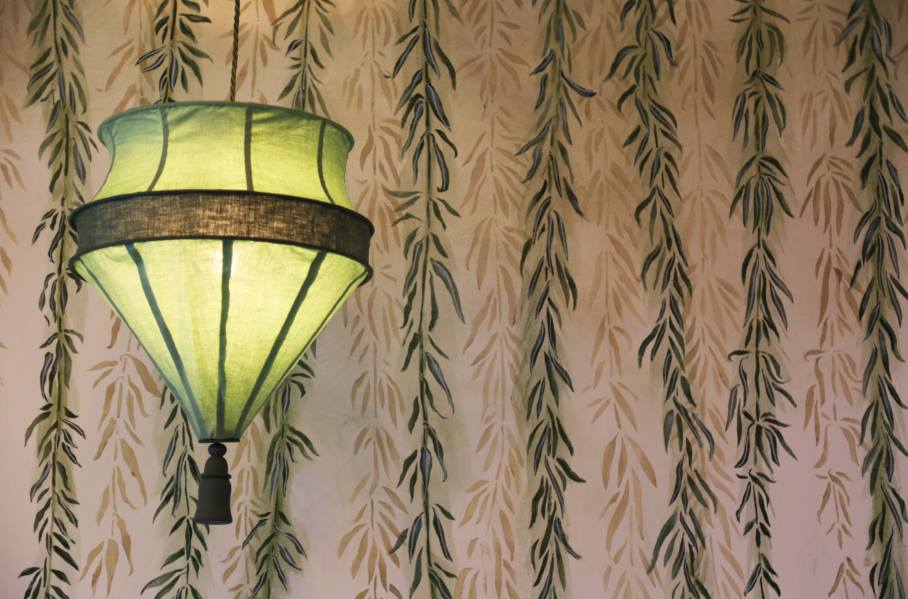 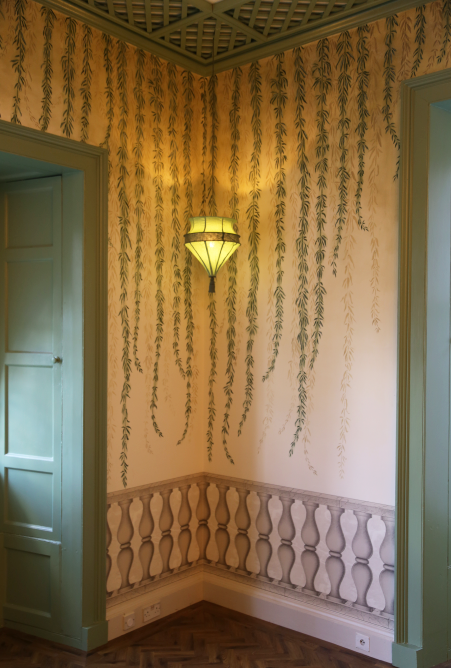 This room is actually very reminiscent to the conservatory down to the paint color and latticework on the ceiling. 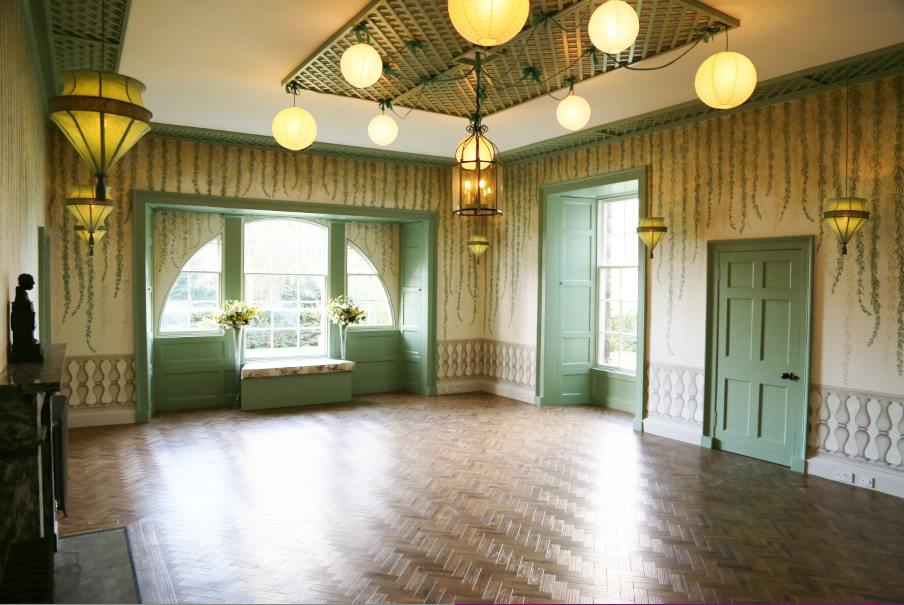 Have you seen the show and what did  you think?

All images from Ordeal by Innocence are included courtesy of Agatha Christie Productions Limited, the series was directed by Sandra Goldbacher and the production designers for the series were Catrin Meredydd and Jo Riddell.

If you enjoy this, you may also enjoy: Atonement