If you’re a fan of interior decorating, and unless you live under a rock, you’ve no doubt heard of the passing of design legend Mario Buatta at 82. Joni, Megan and I had the distinct honor of interviewing Mario on our final Skirted Roundtable podcast back in 2013 on the release of his one and only book Mario Buatta: Fifty Years of American Interior Decoration. While I might normally refer to someone of his generation and legend in a more formal  manner, Mario was so genial, so friendly, that it’s hard not to feel comfortable referring to him by his first name. His “American English Country Look” influenced a generation of decorating, as he was influenced by those who came before him, most notably John Fowler of Colefax and Fowler. He is one of the designers listed in the new book Inspired Design: The 100 Most Important Interior Designs of the Past 100 Years by Jennifer Boles.

One big, notable thing about Mario was that he primarily worked alone. In our interview, he shared that he had no staff and did all his own ordering and was even doing design via email with far flung clients. He felt it was quicker to just order things himself rather than instruct an assistant. It’s hard to imagine, but he himself said he was married to his work.

Some of my takeaways, in no particular order,  from the work of Mario Buatta:

A little tour of some of my favorite Mario rooms:

Mario in his own words or from those who knew him on my podcast, The Skirted Roundtable.

Stylish Shopping with Susanna Salk and Mario Buatta on Quintessance 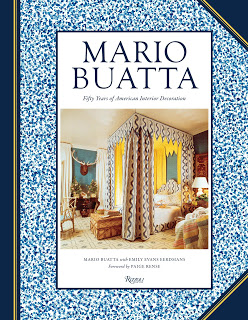 I’d love to know your thoughts or memories of Mario Buatta and if you have a favorite designer who seems a worthy successor?

13 thoughts on “Honoring Mario Buatta – A Legend, A Life and Livable Spaces”