Many older homes, particularly in New England, are filled with charming nooks and interesting spaces. They’ve evolved over time with additions and other enhancements. But, these charming spaces can also pose design dilemmas – such as what the heck to do with low ceilings or those with odd angles. And what if we want to wallpaper them? How is that done?

I’ve pulled together a group of images of these interesting spaces with challenging ceiling lines. All are bedrooms and bathrooms because, no surprise, these rooms are usually found on upper floors of houses where the roof lines dictate the rooms below.

This Windsor Smith designed bedroom above features a large angled ceiling which also cuts in on the left. She boldly chose a very large medallion pattern on the wall which matches the bedding. Now, it’s important to remember that one image taken from one angle isn’t the best way to judge a space. I would say that I’d personally have preferred the “break” where the wall angles in to either bisect the medallion evenly, or happen between two groups of medallions. However, the whole room and all the angles need to be taken into account and how all the angles come together. This isn’t a pattern for an amateur to attempt on anything but a straight wall. But, running the pattern up the wall and and the angled portion expands the room significantly and provides a lovely envelope.

This pink papered room by Jamie Meares of isuwanee blog is a gorgeous use of a large scale paisley pattern. The wall on the right with the angled in wall shows that they placed the paper pattern to cut across at the top of the pattern repeat, which is a very pleasing look. The corner where all the patterns merge (behind the chair) is the real tricky spot, but I think the pattern is linear enough with out a lot of contrast in the colors that it works.

This bathroom designed by Tom Sheerer shows a tricky curved ceiling with a low window. It’s a very low room and there was no choice but to run the same pattern, or color if it were painted, up the wall and over top. There is no line to cut the pattern and it would have felt like a tiny hole otherwise. The choice of placement had to have been carefully made because the paper has got such a strong pattern. Not for the faint of heart.

Speaking of not for the faint of heart, this Todd Hase designed space is definitely not for everyone. It has the feeling of a tented space, doesn’t it? It looks as if they definitely did place the pattern so as to have this effect. For instance, the opposing walls on each side of the window where they angle in, we can see that there is a gray/white striped piece of paper, which was cut out of the overall pattern. It softens  yet still defines the angle and gives it a feeling of dimensionality.

This space is probably the trickiest of all the rooms. We have the right hand wall and back wall with standard crown molding and the left hand wall is an angle with no crown molding. I love the wallpaper and I love the idea of the paper wrapped over top the bed. But I will say that I’d have removed the crown molding to mitigate the imbalance. That said, I don’t know what’s going on in the rest of the room and I always advocate for crown to be added to rooms. But these types of spaces require certain rules to be broken and this may be one. I would also not have used a paper which has an obvious top and bottom to the pattern because there’s no way to avoid it looking off on at least one wall. I do love the cosiness of this space.

Here is a good pattern to run up the walls and over top. There is probably a correct up and down in the pattern, but its not so strong that it can be viewed from different angles.

One of my favorite designers, Charlotte Moss, always gets things right. In this bedroom, we have a lot of the same pattern. There are a ton of angles that would have required a lot of advanced planning. And, to be honest, a lot of wasted wallpaper in order to get it all right. I love that the medallions here are bisected in the middle as the wall angles in. In the window alcove, she chose to run the paper over top. Why this works is because  it serves to “smooth” over all the wonky angles.

In this Huff Dewberry designed bathroom, we see a strong pattern on the walls that works just as well in the angled spaces above the window. They also could have painted the angled ceiling above the window white, or dark blue, and it would have worked too, I think. But using the paper keeps it from looking too broken up and is also a bolder choice.

Well, I’m on the record as loving pink so it won’t be a surprise to know that I am swooning over this pink marbled wallpaper in a bathroom designed by Sarah Sherman-Samuel. Because the overall pattern that has no strong starting and stopping point, it would be the easiest style paper for an amateur to plan and install.

Takeaways for wallpaper on ceilings and angled walls:

I haven’t done a ton of wallpaper in my work or in my own home, so I’d love to hear from you – do you have tips on selecting patterns and how to install? Any horror stories we should avoid? Or successes? Please share! 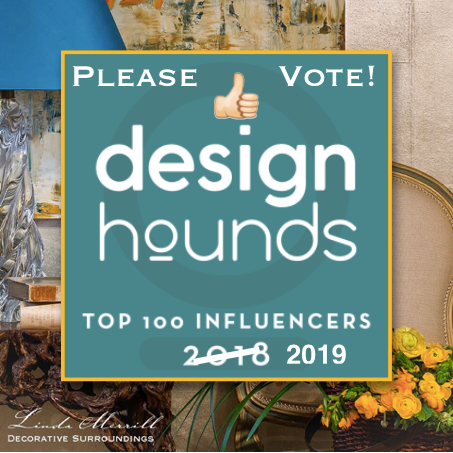 Voting ends tomorrow Nov 2nd and I’d be honored for your vote. You can vote for as many people on the list and vote once a day. Simply click the image above and then search for my listing which is currently in the mid-30’s. Just click the 👍🏻 button to vote. Thank you!

4 thoughts on “Design Nuggets: Wallpaper on Ceilings and Angles”