Okay, so in my previous post on Outlander Season 4, I said that I wasn’t sure about the accuracy of the set design. Accuracy, or lack thereof, is probably a strong word – we are talking about a story that involves time travel. I did, however, think it would be interesting to compare the production’s version of a successful North Carolina plantation home with a couple of period examples.

So, as a reminder: 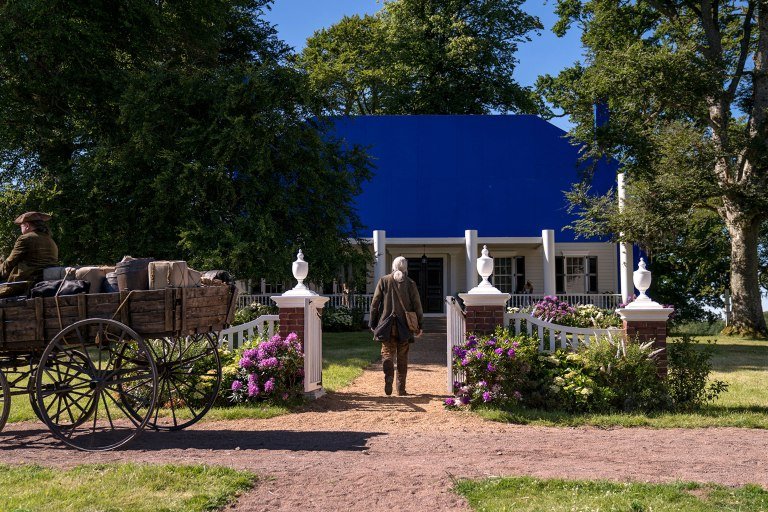 With the magic of filmmaking, only one story of the front exterior was built. There is no second floor. Or rear of the house, it’s all scaffolding.  The blue screen magically becomes the second story.

So, when we see Jamie and Jocasta on the veranda, there is a reason why it’s a fairly tight shot. Beautifully done though, no? Based on my research, this house exterior feels very of the period and accurate in architectural style, size and scale. 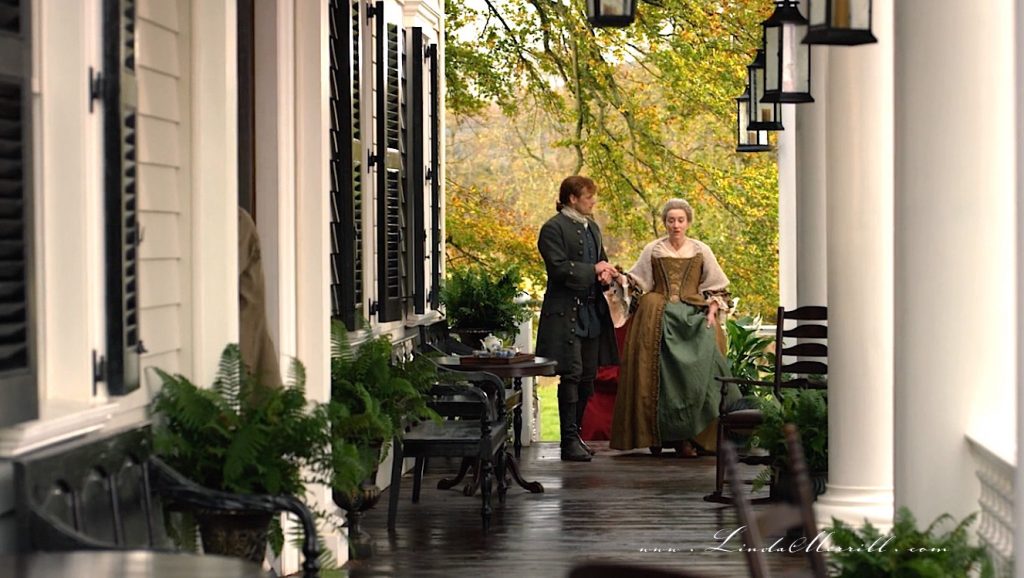 Now, call me a stickler, but the inside of River Run, which like the Paris apartments and Boston house was built on a sound stage, is a little bit like the TARDIS – it’s bigger on the inside.  The exteriors show a fairly modest two story house with average ceiling heights, probably 8FT. If you look at the veranda image above, there is no headroom above the front door. On the inside, however, there is at least 3-1/2 feet of wall above the front door. And if you look again above to the veranda shot, you will see the placement of the windows flanking the front door. Looking below, there are walls where the windows should be. Truly, not a huge deal. And while I was scratching my head a little while watching the show, I didn’t really note all this detail and disconnect until I studied the images. 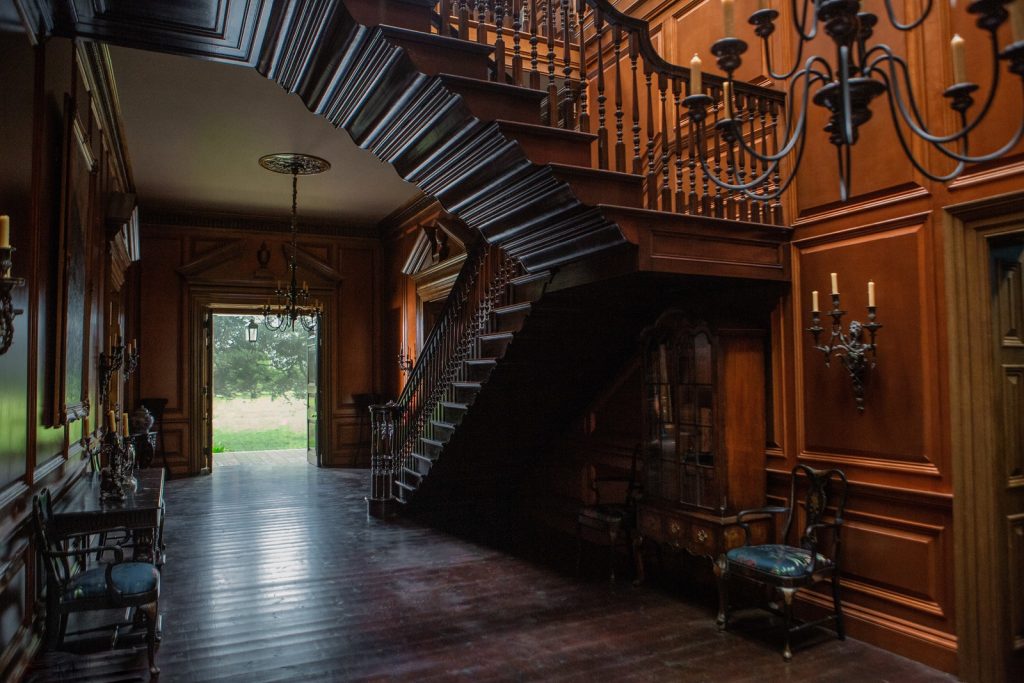 The Palladian window wall below is gorgeous isn’t it? The tobacco stained millwork with the teal silk settee and drapery is stunning. The acanthus topped columns with the reeding detail – spectacular. Possibly inspired by Benjamin Latrobe’s “American Order” which substituted natural elements like acanthus tobacco leaves for the classical Corinthian column designs. River Run pre-dates Latrobe by something like 40 years, but it’s still stunning. 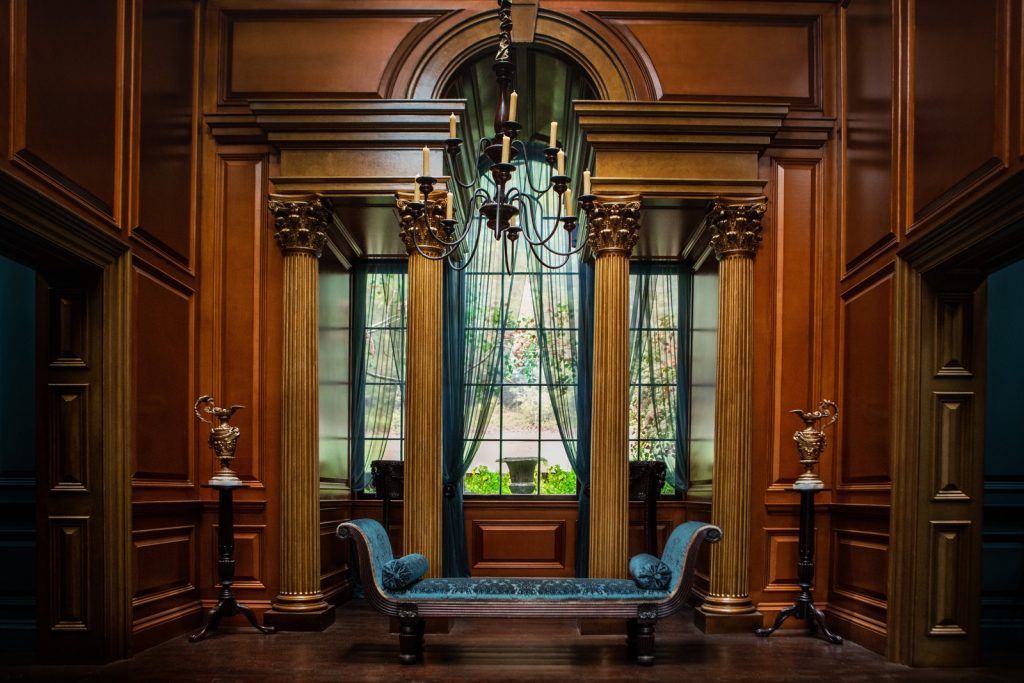 These beauty shots, are from Starz.  I can’t help but point out that again, the ceilings are too high and this whole tableaux as spectacular as it is, is way to big and grand for the exterior of the house. The only wall this would have worked on was the back wall of the house, opposite the front door, behind the stair case.

One question – sheers on the windows? Was that a thing? Sheer silk fabrics were around for clothing, but I have absolutely no idea about its use on windows. I’d love to hear opinions from readers if any of you know this?  In any event, they would have cost a ginormous amount of money. 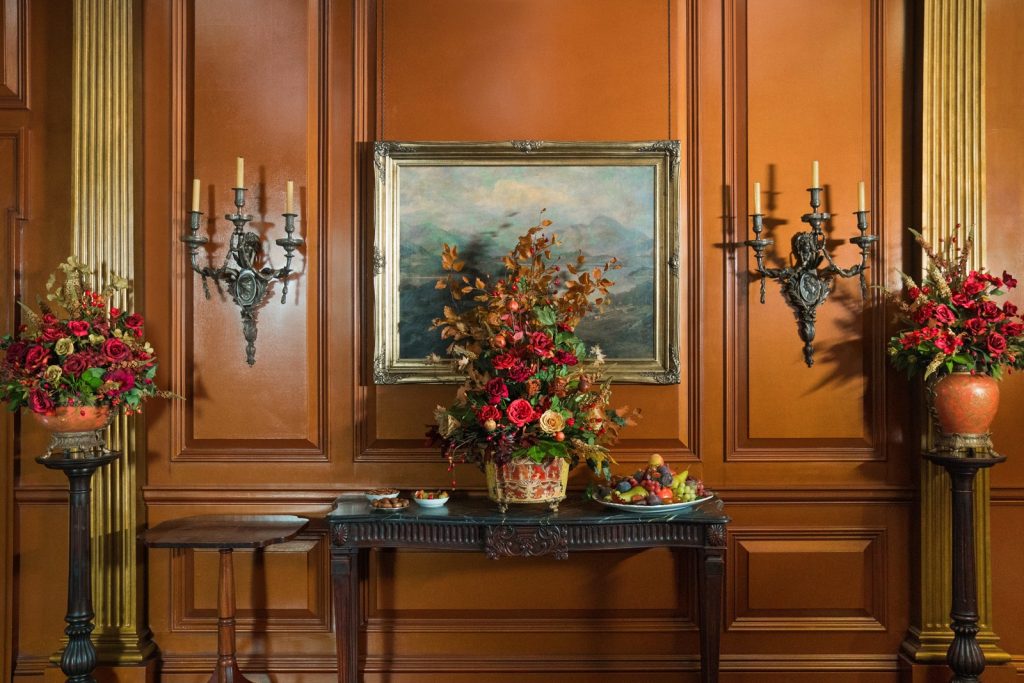 The lavish use of the silk upholstery fabric is seen throughout the house. I like this idea – it not only created a harmonious whole, but felt more true to life. Since it would have been imported, it would make sense to have a whole lot of one fabric made to order. 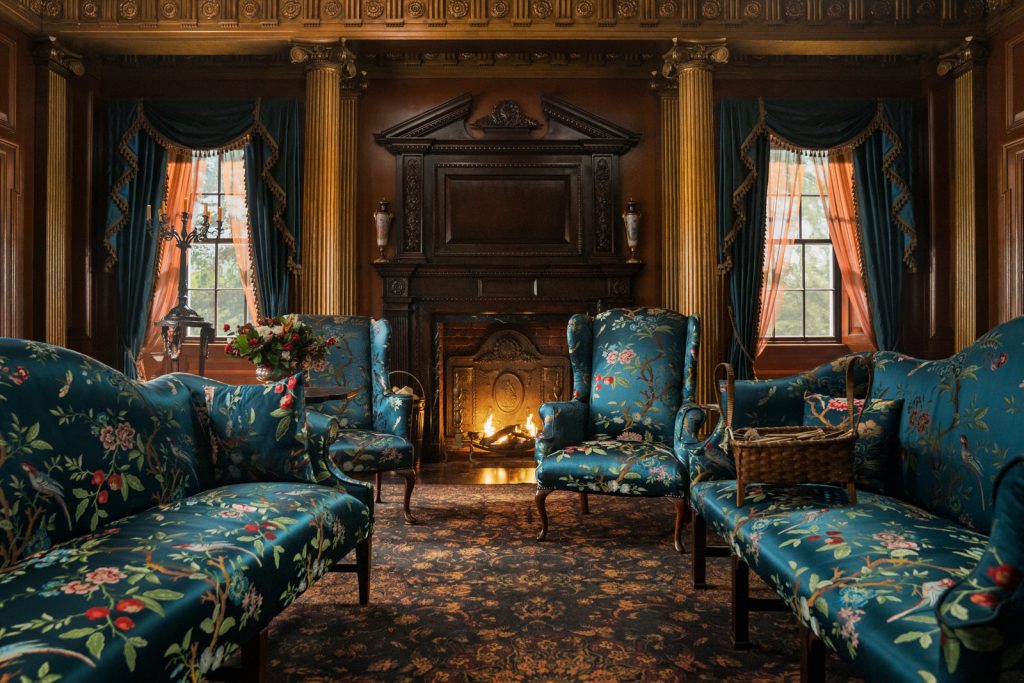 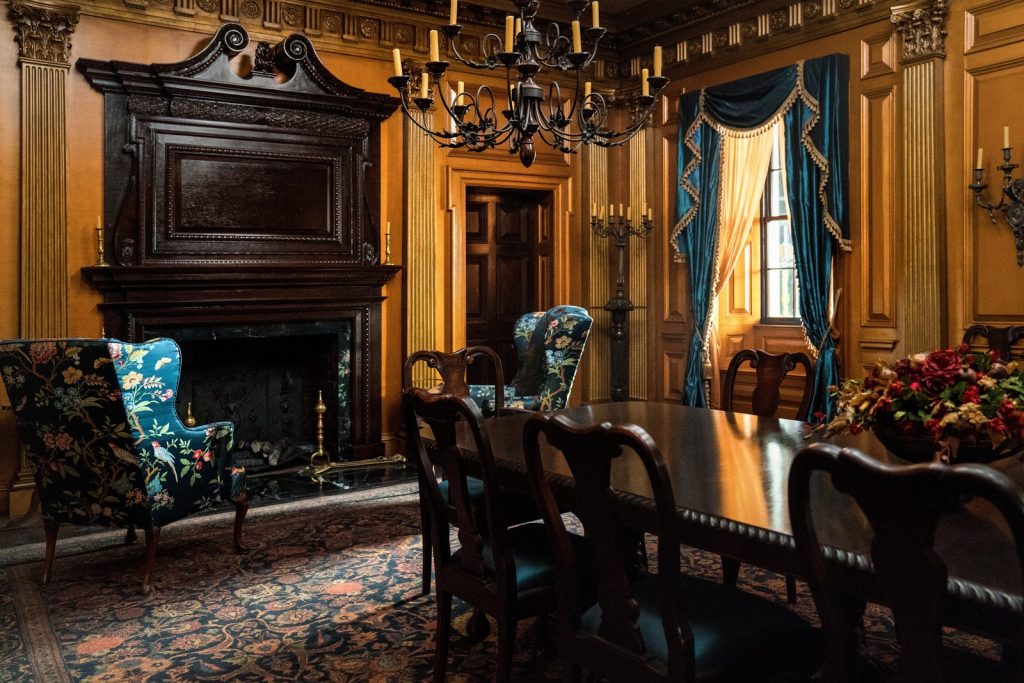 I’m really not feeling the bedroom for this production. The shade of purple and liberal use of silk damask for a guest room seems inappropriately lavish. The use of Louis style fauteuils with a pie crust table – hmmm. This room seems like a dressed-down version of the Paris apartments. And I really actively dislike the gray painted woodwork. 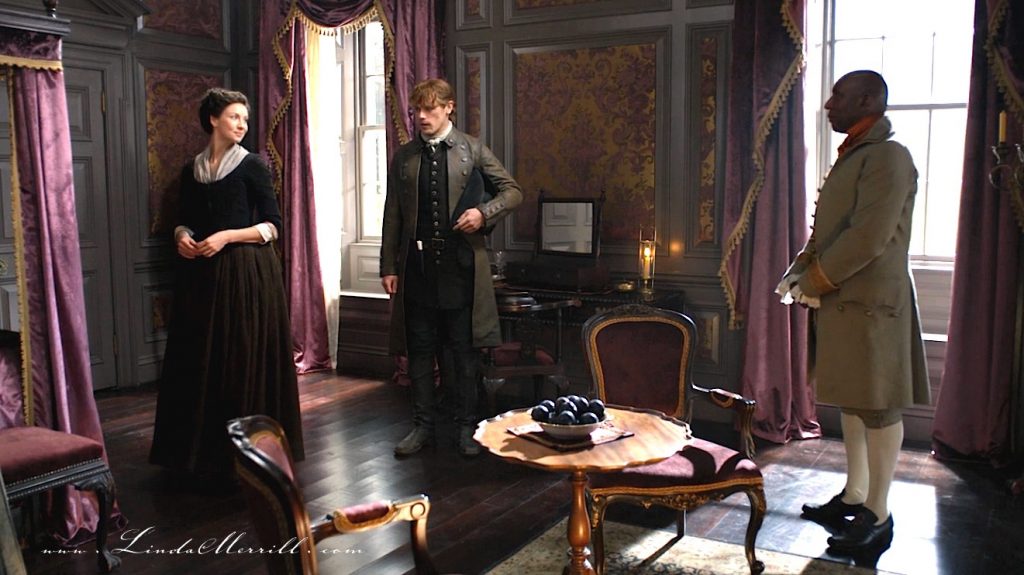 Okay, so enough of my whining. To the fun part – how do Outlander’s River Run sets compare to their real-life equivalents?

George Washington’s father built the original 1-1/2 story house, later called Mount Vernon,  in 1735. Washington acquired the house in 1754 and over the next 45 years expanded it to the 21-room mansion we see today. 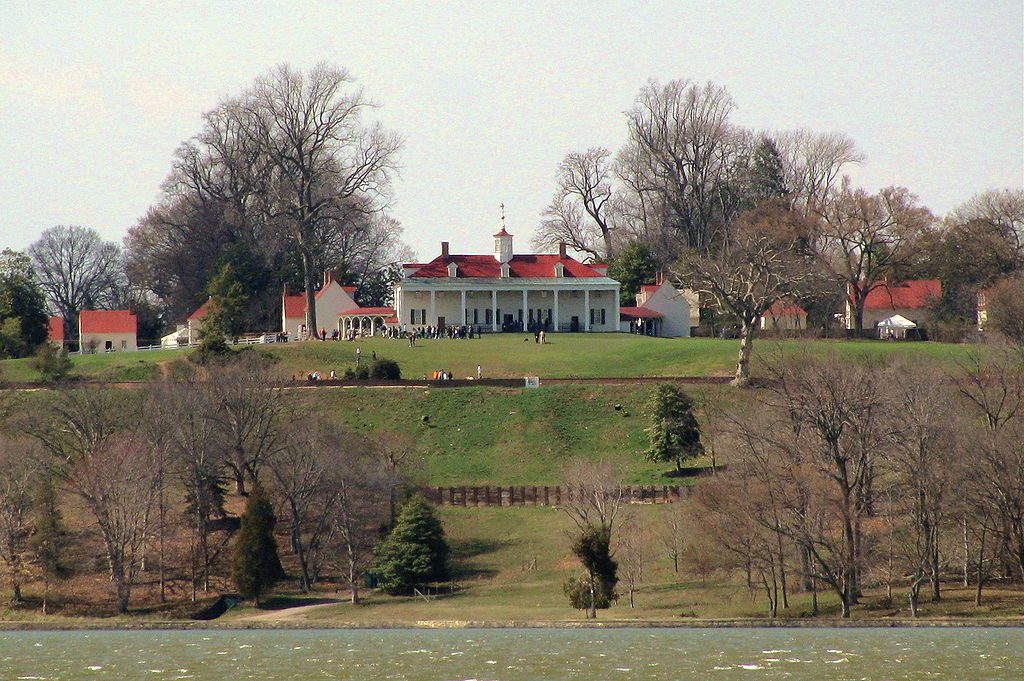 There’s a lot of similarities with River Run, aren’t there? 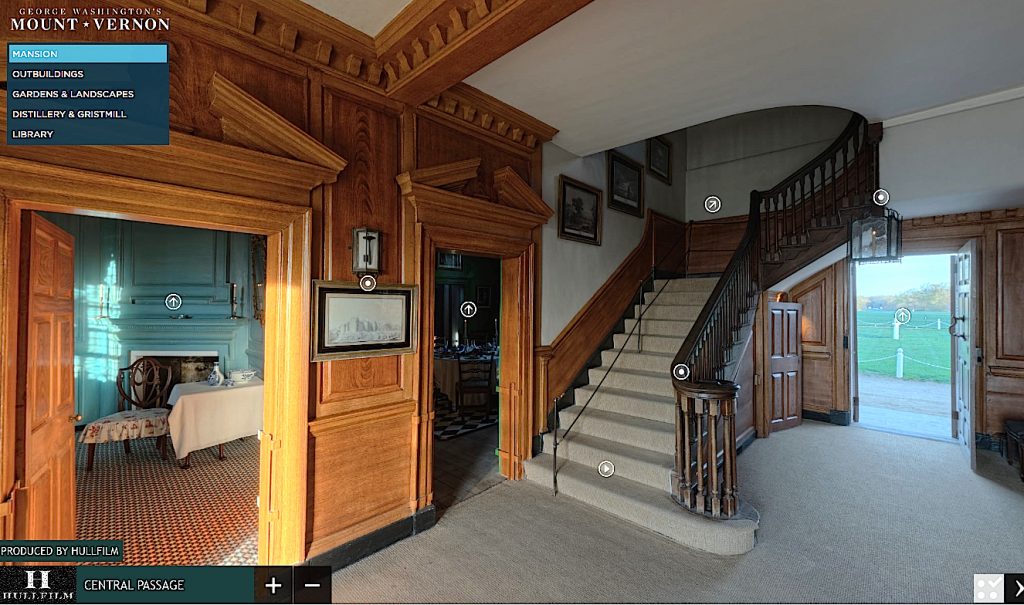 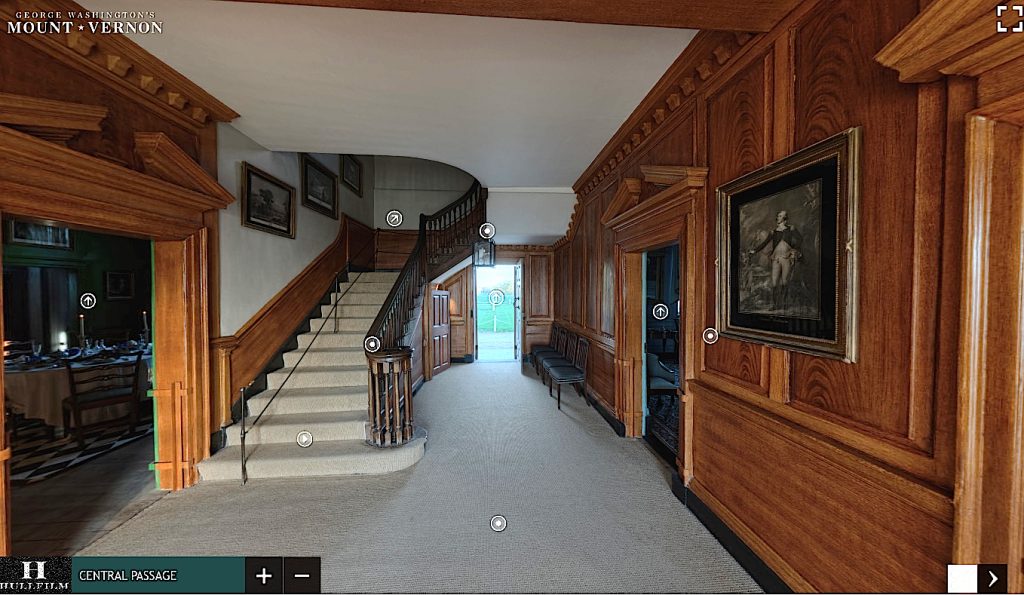 The staircase is not as grand, but then it couldn’t be, because it has to actually fit the ceiling height…

One thing I want to point out about these images – they were taken as screen grabs from the virtual 3D tour they have on the Mount Vernon website – which I highly recommend. So much great information and detail, especially for those of us who have never been there. So, because these are from a 3D view point, the walls can be skewed a little, just a heads up. I’m not entirely sure why there is wall to wall carpeting on the floor and stairs. Maybe they still need restoration? 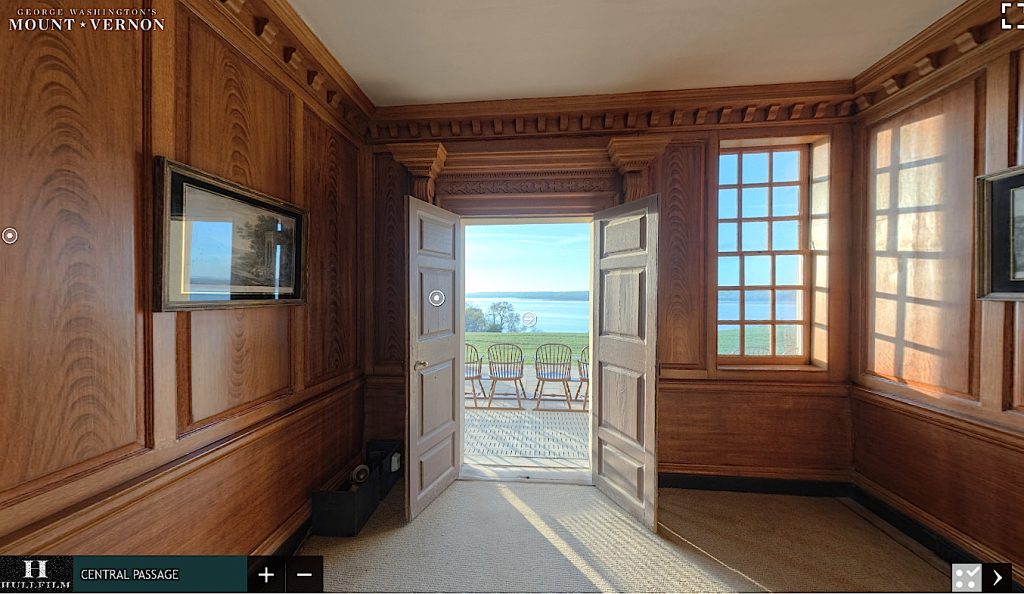 How gorgeous is the West Parlor??? That color blue is amazing. There is a really beautiful lightness to this room. 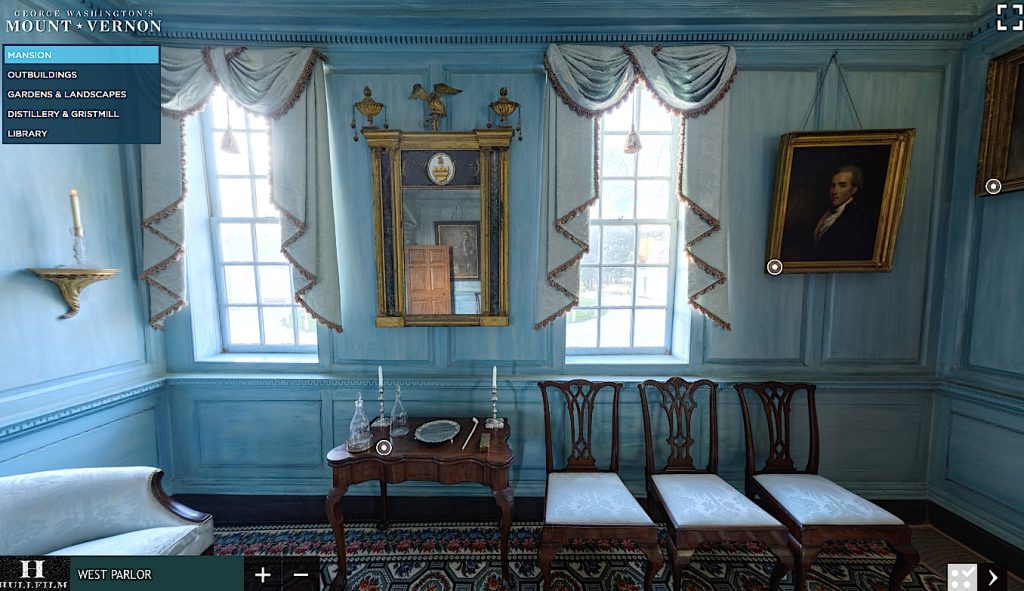 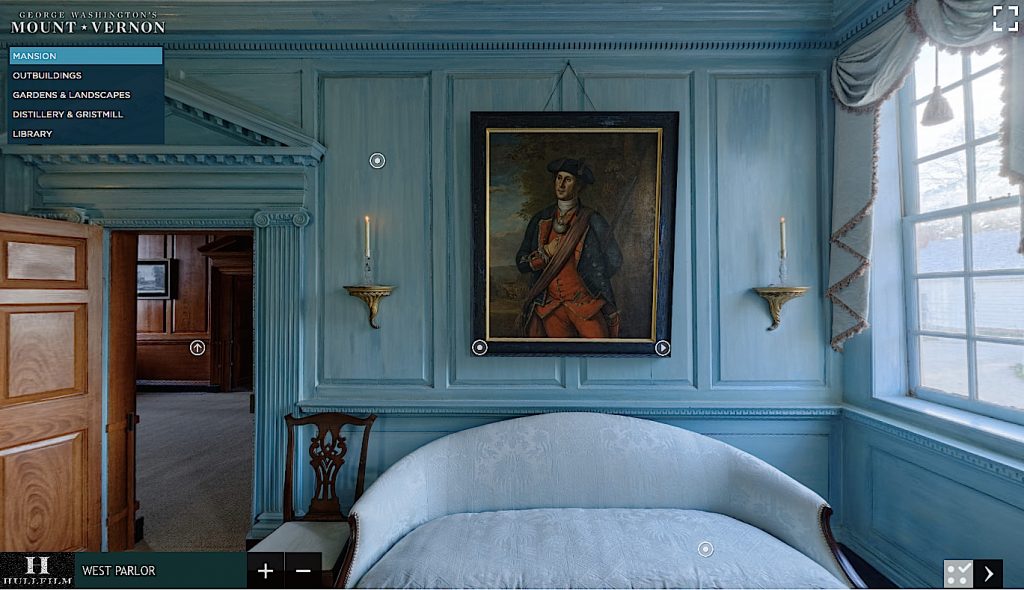 And speaking of ornamentation – note the beautiful Adam-esq plaster work on the ceiling of the dining room below. The verdigris green paint was original to the room – made from oxidized copper which required constant upkeep to keep it from turning black. An enormously expensive proposition. 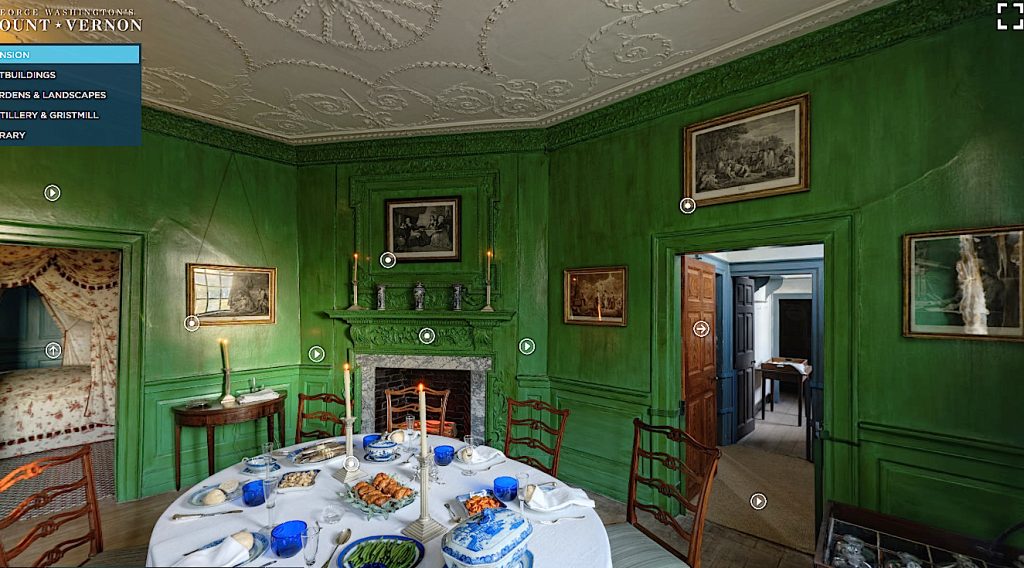 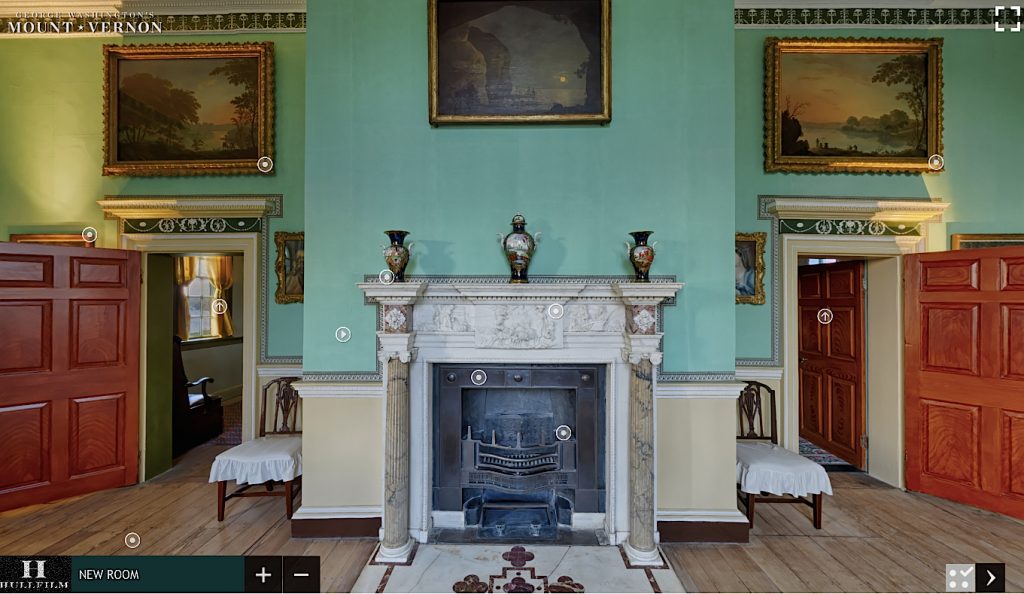 The “New Room” was built in the 1780’s and decorated through the 1790’s. And look, there is a lovely Palladian window similar to the one at River Run! 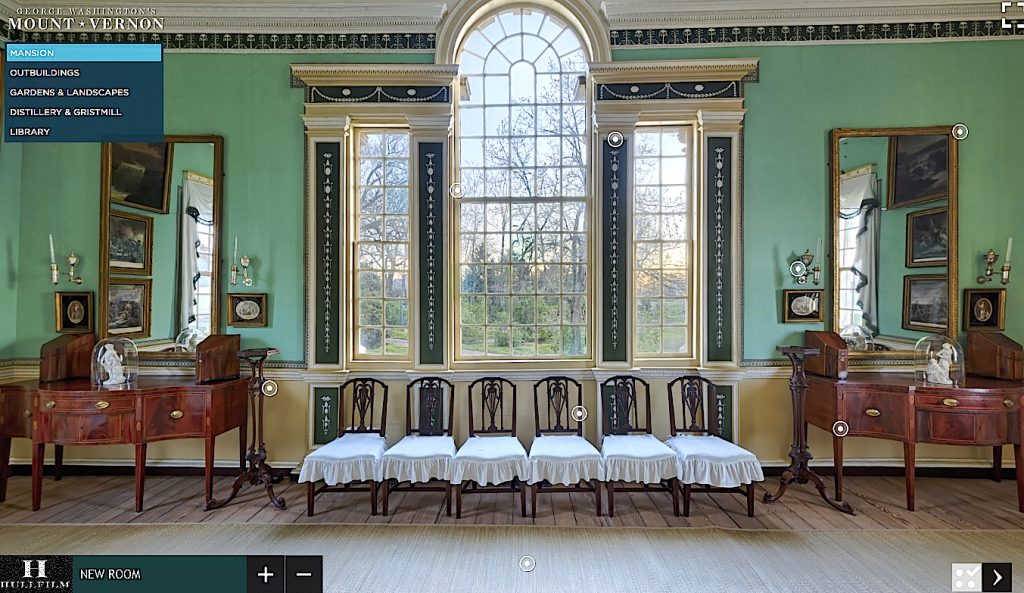 The set of Aitken chairs are slipcovered in dimity skirts to protect the upholstery underneath. While this might look a little “modern” to our eyes, slipcovers were used in the 18th century. The silk and wool fabric underneath was likely of the kind original to the chairs, based on a remnant they found on one of them. (Seriously, the Virtual 3D tour is a wealth of information!) 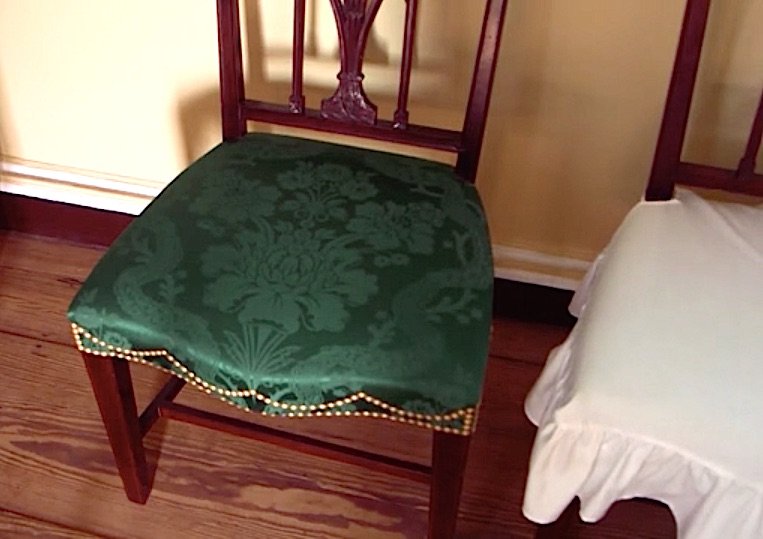 Once we get into the secondary rooms, we see a much simpler style and level of ornamentation. 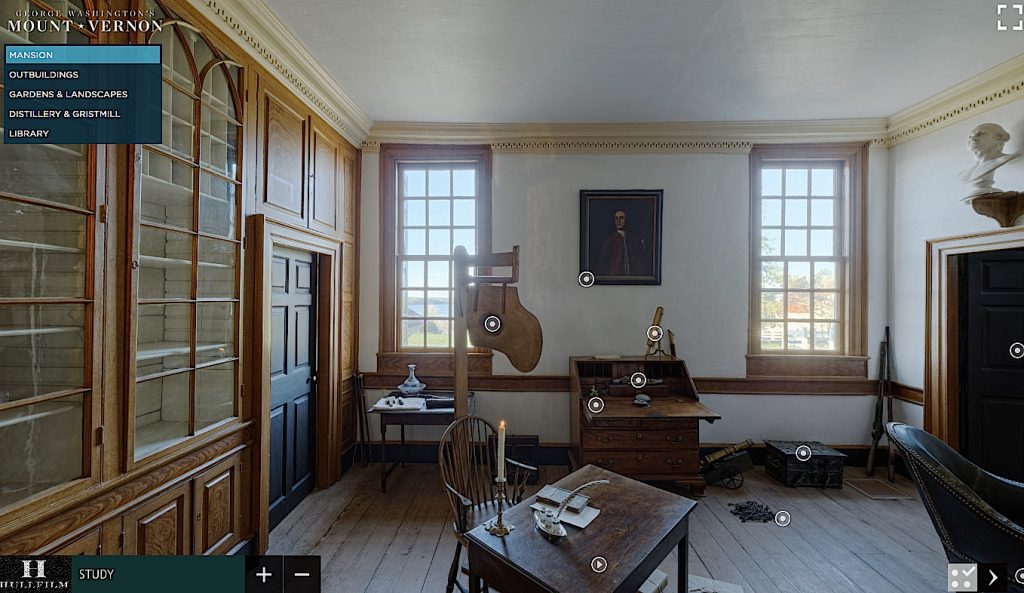 Below was the Washington’s bedroom and this is the bed in which George died in 1799. The simple design and plain white linens and bed curtains showed that the Washington’s personal style was one of simplicity. 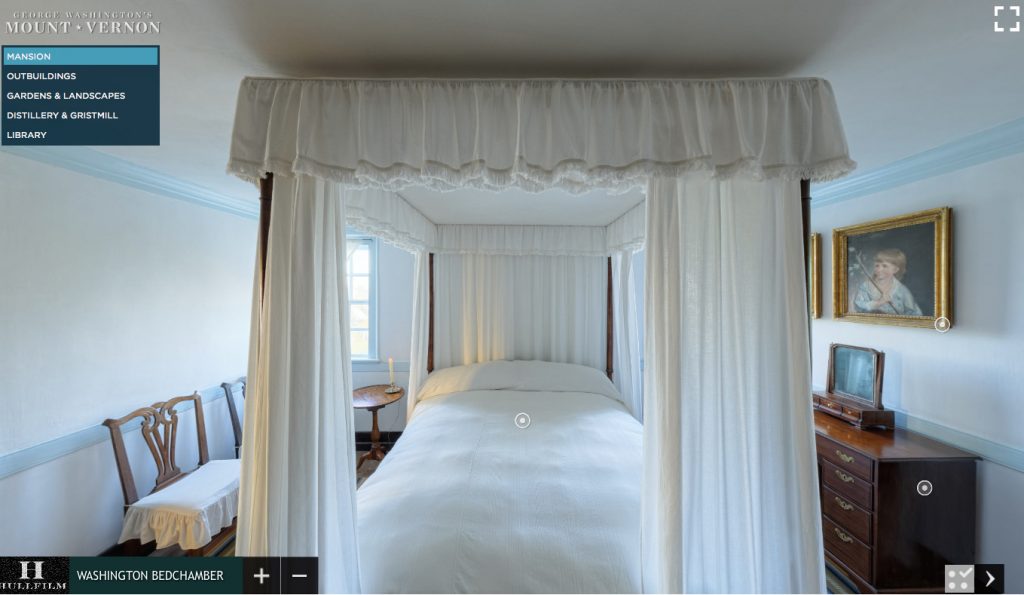 I truly would have been much happier if the River Run bedroom given to Jamie and Claire were closer to this style than the overly ornate one in the series. 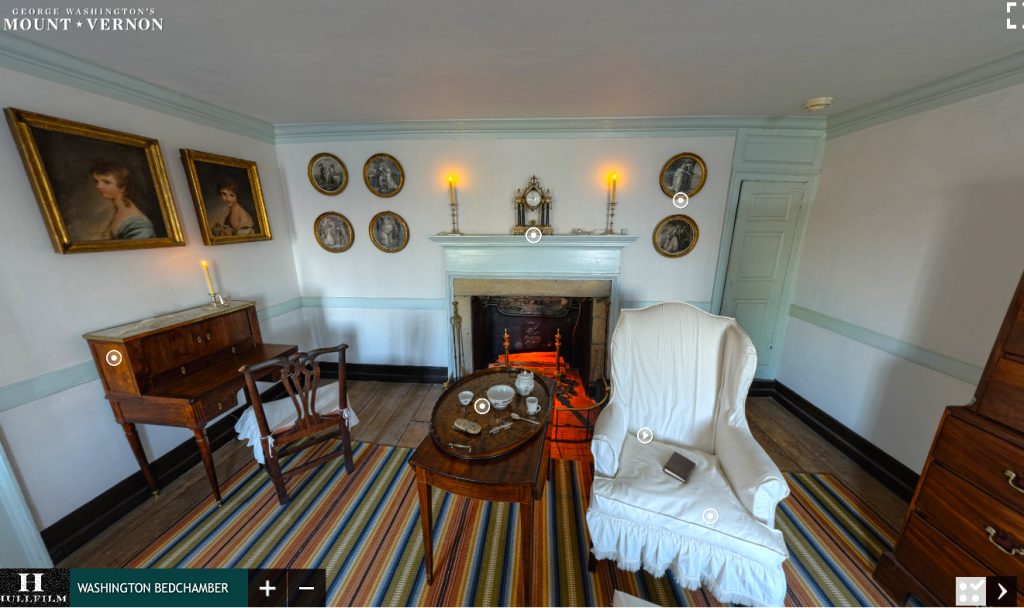 One of these days I’ve got to make it to Mount Vernon (and Monticello for that matter!) But I so appreciate all the wonderful detail on their website!

Next, we’ll travel to Governor William Tryon’s “Palace” which actually plays a role in season 4 of Outlander. There is mention of the Governor taxing the people in order to pay for this palace – which is why the regulator’s were so up in arms. They didn’t feel this was particularly the best use of their hard earned money.

The Governor’s Palace was built for Governor William Tryon to serve as the first permanent capitol of the Colony of North Carolina, although he only spent one year there after it was completed in 1770.  A recreation of the original is what visitors will encounter today, as a fire destroyed the main building in 1798. Information via Travel Through Life.

Because Tryon Palace was more of public space than a private home (like the Washington’s house), it’s more ornate and while maybe not larger than Mount Washington, it’s more grand. 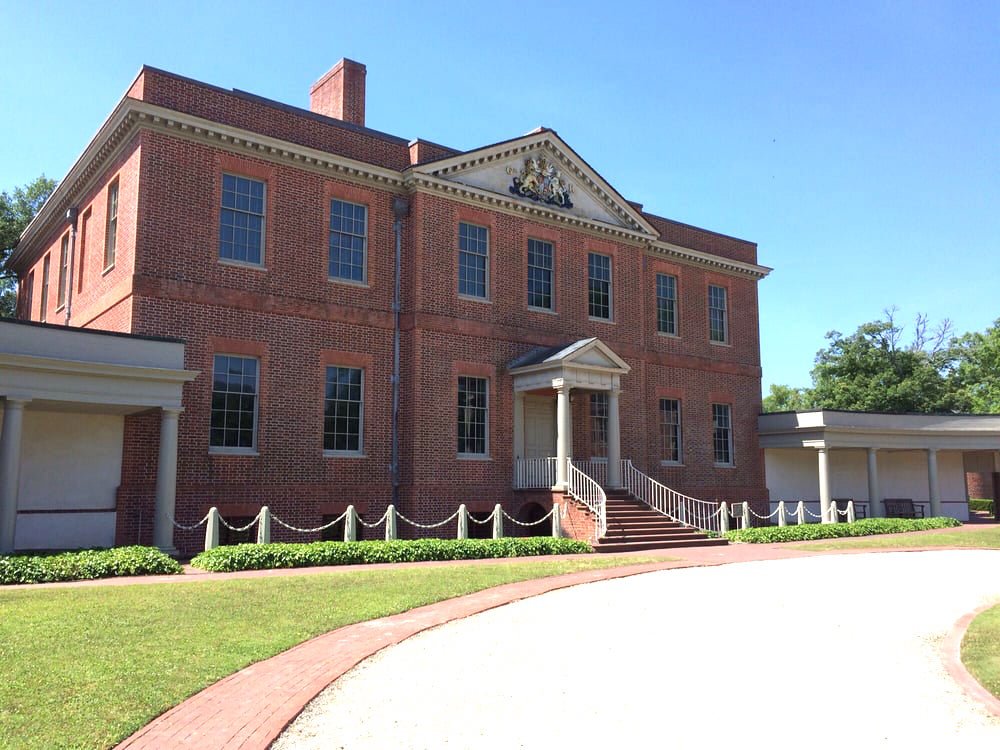 The staircase is very similar to the one in River Run. Truly a spectacular work of art – and all made by hand.

There is a virtual 3D tour of some of Tryon Palace that was made in conjunction with Google. There’s no additional information, but offers an interesting perspective. 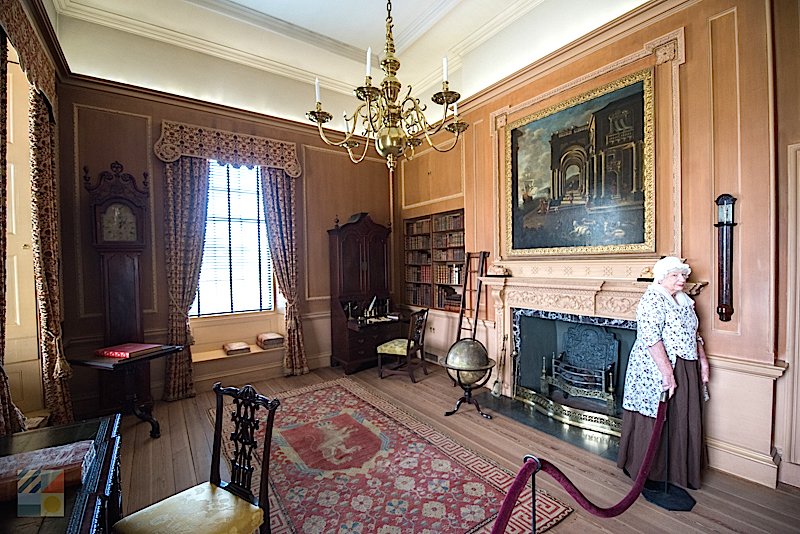 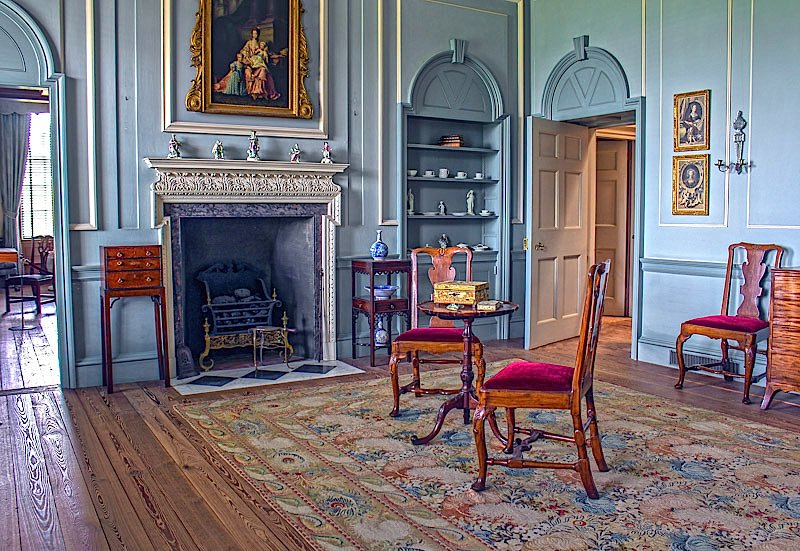 I’ll admit I’m surprised by the lightly stained, scraped, nature of the floors. I would have thought they’d be darker. But I’ve learned something new. They are beautiful. 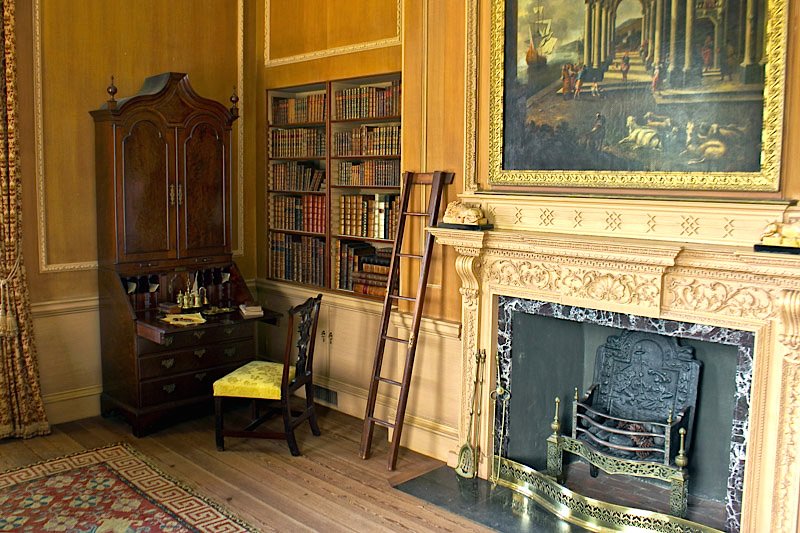 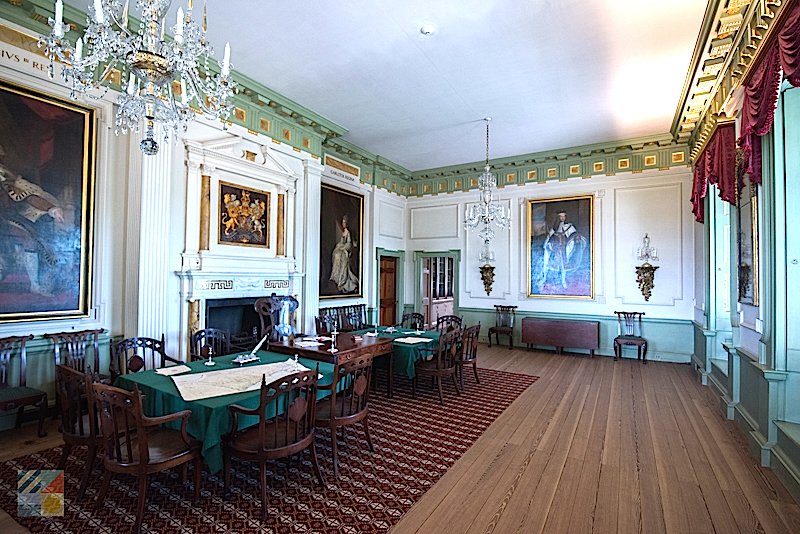 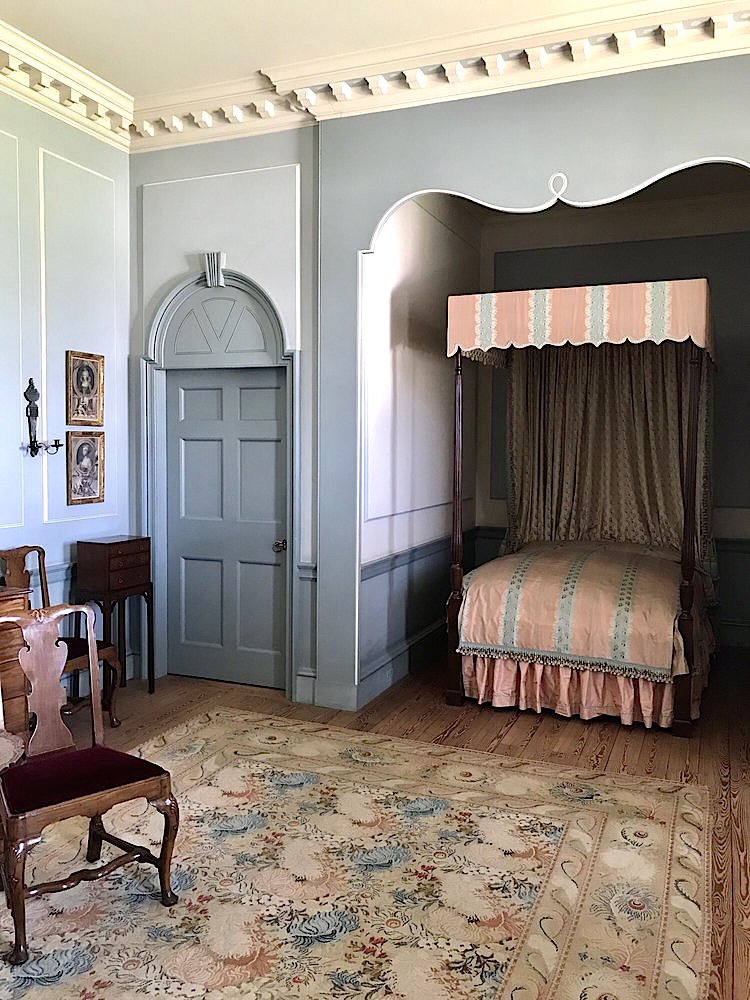 The bedrooms, while larger and more formal than the Washington’s cozy bedroom, would have worked well for the Frasers. As an aside, I don’t pretend to be an expert on historical design, but I feel fairly certain the electric fan on the floor in the room below isn’t period… The window treatments throughout the house with the beautiful pelmets are a real treat. As are the gorgeous Aubusson carpets. 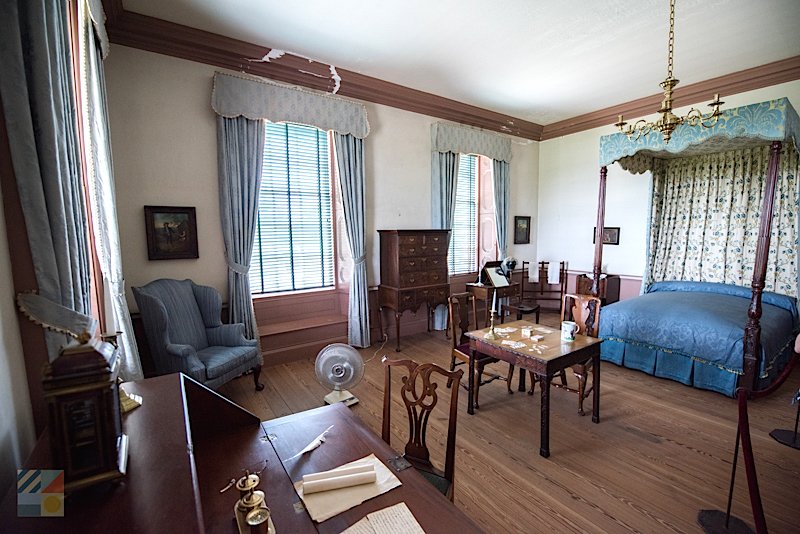 Here’s a fun little tidbit for locals of New Bern, North Carolina, or those traveling there. There will be a series of Outlander themed tours of Tryon Palace starting this month!

In doing my research and pondering my “feelings” about the set design of River Run, I guess I come to the conclusion that the interior design wasn’t impossible for the time and place. Not likely, mind you, but possible. I think I personally would have preferred a more period and location appropriate design over all. Something more like how it was described in the book:

River Run was an “imposing two-storied house, colonnaded and multichimneyed. The house was spacious and airy inside, with high ceilings and wide French doors in all the downstairs rooms. I caught a glimpse of silver and crystal as we passed a large formal dining room, and thought that on the evidence, Hector Cameron must have been a very successful planter indeed. The house and all its furnishings were simple but well crafted, beautiful, and arranged with something more than just taste.”

I can look past the TARDIS-style proportion issues and understand that most viewers will never notice it. And since these sets are the only opportunity for truly beautiful design this season, I guess it makes sense to go all out.

What do you think? Yea or Nay on the set design for Outlander’s River Run?

4 thoughts on “Outlander’s River Run: What Would George Washington Do?”