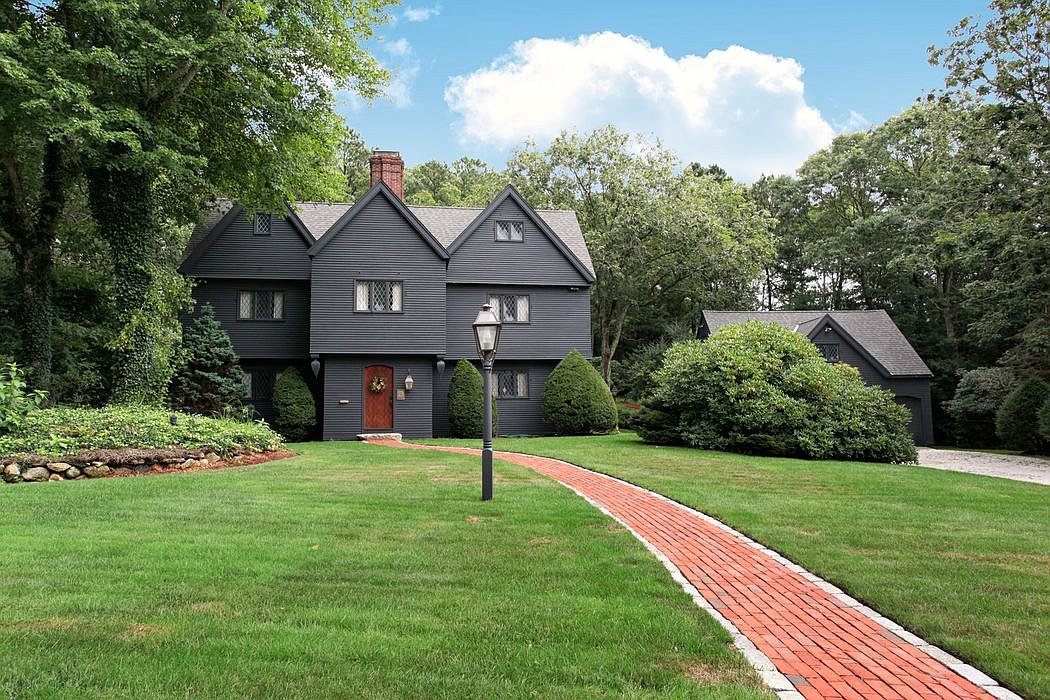 Here in New England we have a lot of historic homes and one of the oldest and most historic – and infamous – is the Jonathan Corwin House in Salem, MA. This house is also known as the Salem Witch House. It’s infamous because the house is the only structure still standing in Salem with direct ties to the Salem witch trials of 1692. The exact date the house was built is unknown, with dates ranging from 1642 to 1675 when Corwin purchased it unfinished. Mid-century not-so-modern, in other words. 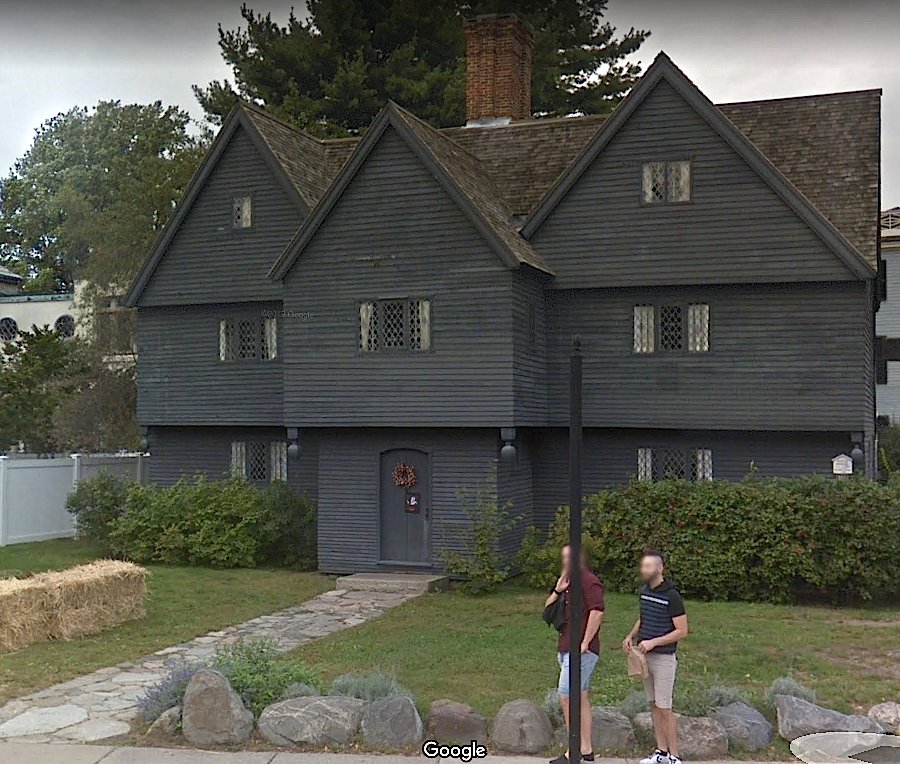 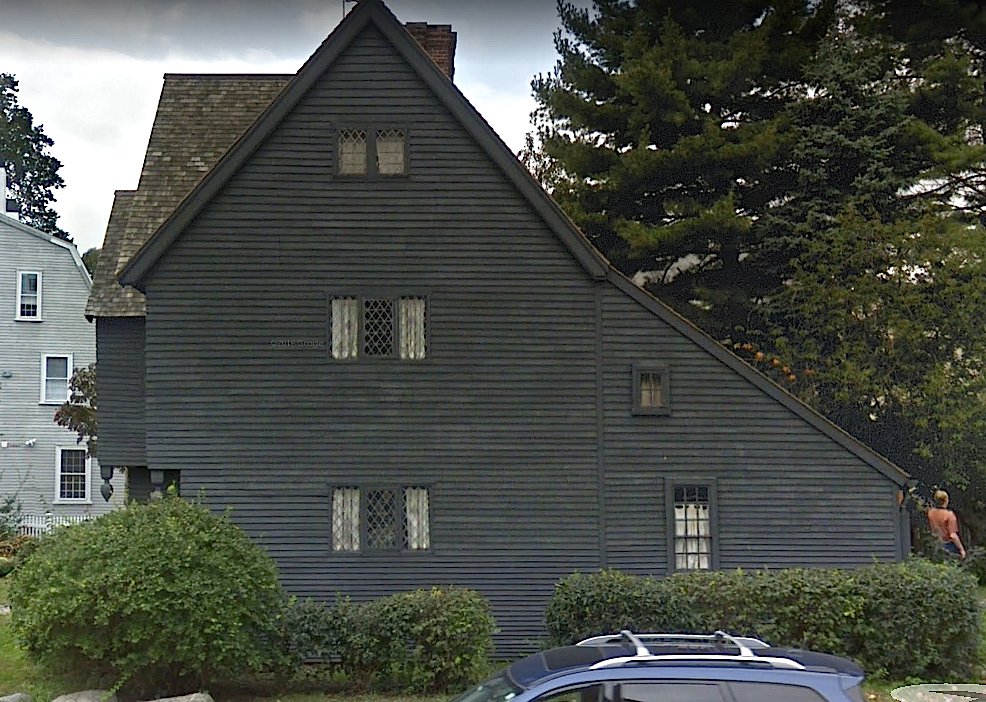 The house bears a striking resemblance to Whitehall in Cheam, Surrey, England, which dates to at least 100 years earlier.

Architecturally, the Witch House “is an excellent example of an opulent First Period home, and features a steeply pitched salt- box roof, large central chimney, projecting two-story porch, five steep gables, and triple-casement windows. The restored interior is furnished to the late 17th century.” per National Park Service Architecture in Salem. Jonathan Corwin was one of the wealthiest men of his time which is why he could afford a house that was fairly large, had lots of windows, relative to other houses of the period, and built to last. Here’s a video of the inside of the house.

So, why am I talking about the Salem Witch house? Because we not only love our historic homes here in New England, but we love a replica! I’ve written in the past about a replica of Monticello that was for sale in Somers, CT and now I’ve found a house in Sandwich, MA that is on the market and is a replica of the Witch House. And, I’ve actually been inside this house. 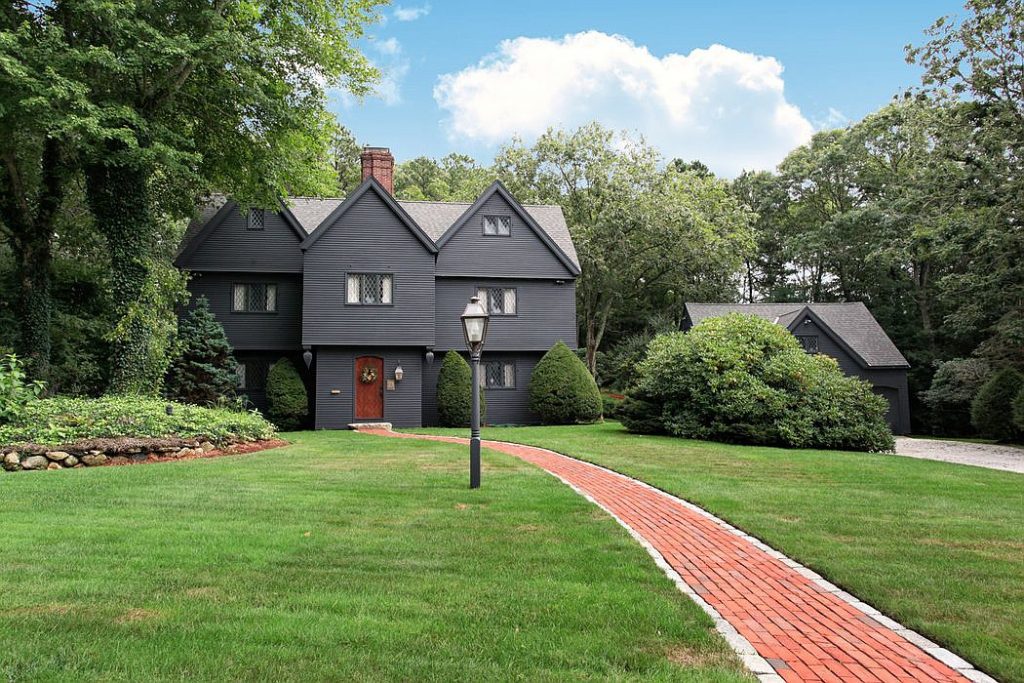 Built in 1984, the house is 2,606 sq. ft. and lots of care was taken to include many historic features while still being a home for modern living. It’s really impressive in person as well as in the photos. I love how it’s sited on the property and I really love a black or dark charcoal house. As a matter of fact, I am working with a client on a mid-century modern house (that’s 20th C, not 17th!) which I want him to paint this color. It’s a palette for all centuries! 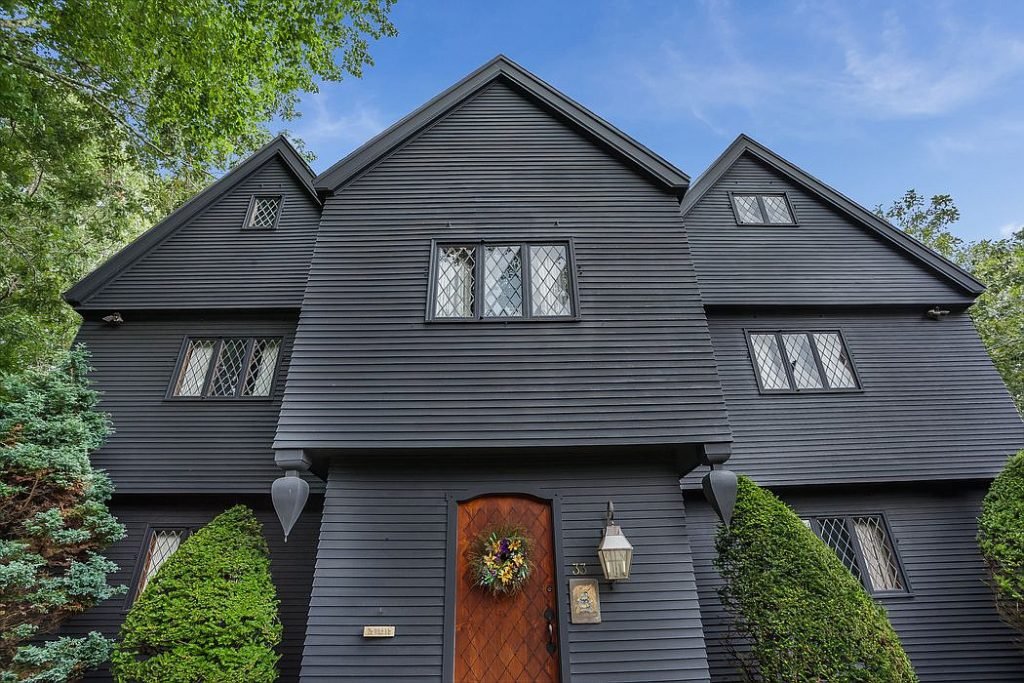 The diamond pattern on the wood front door is gorgeous and mimics with the diamond windows. It also softens and warms up the imposing facade. 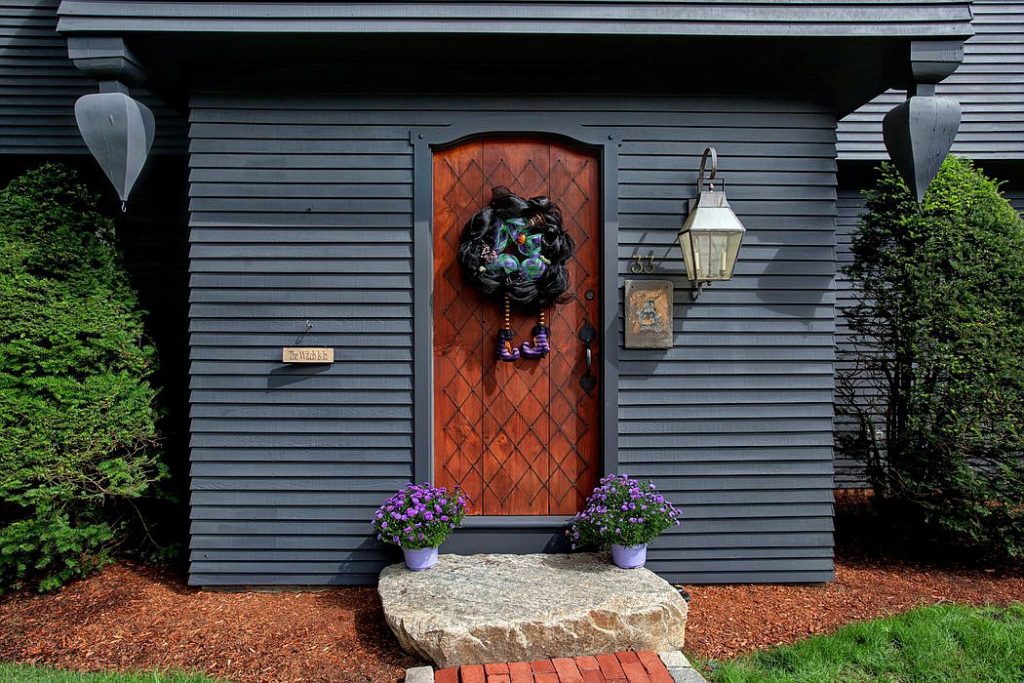 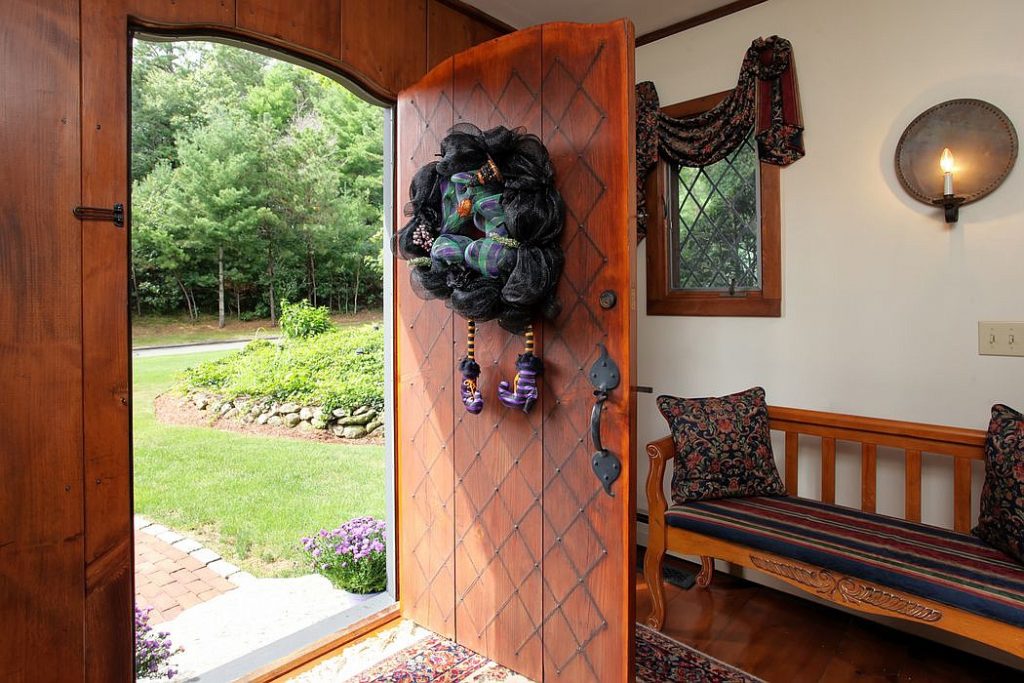 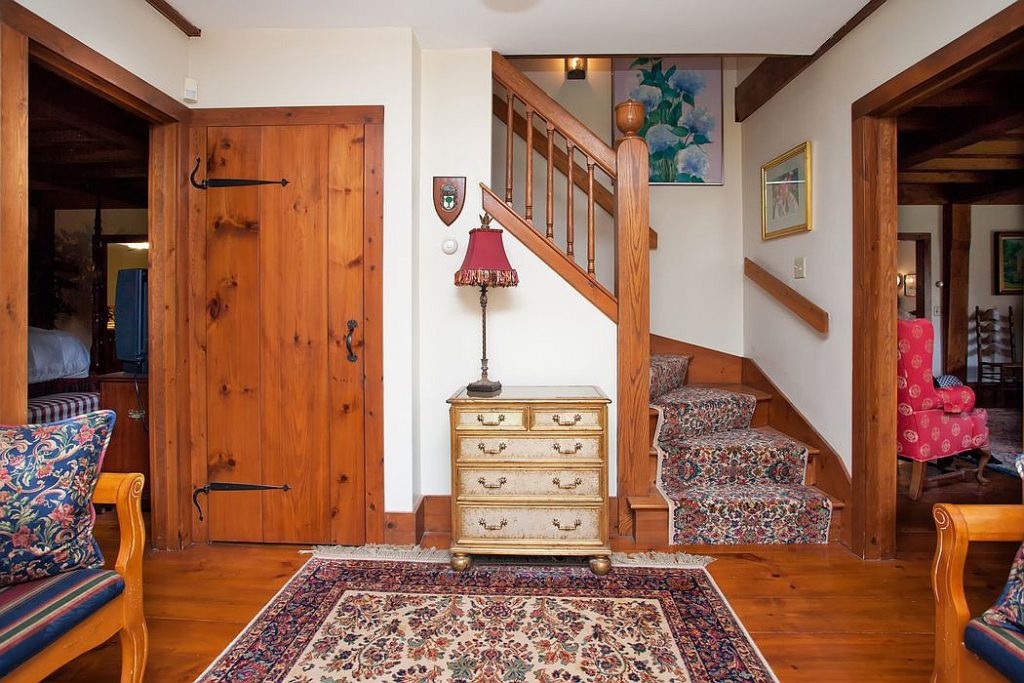 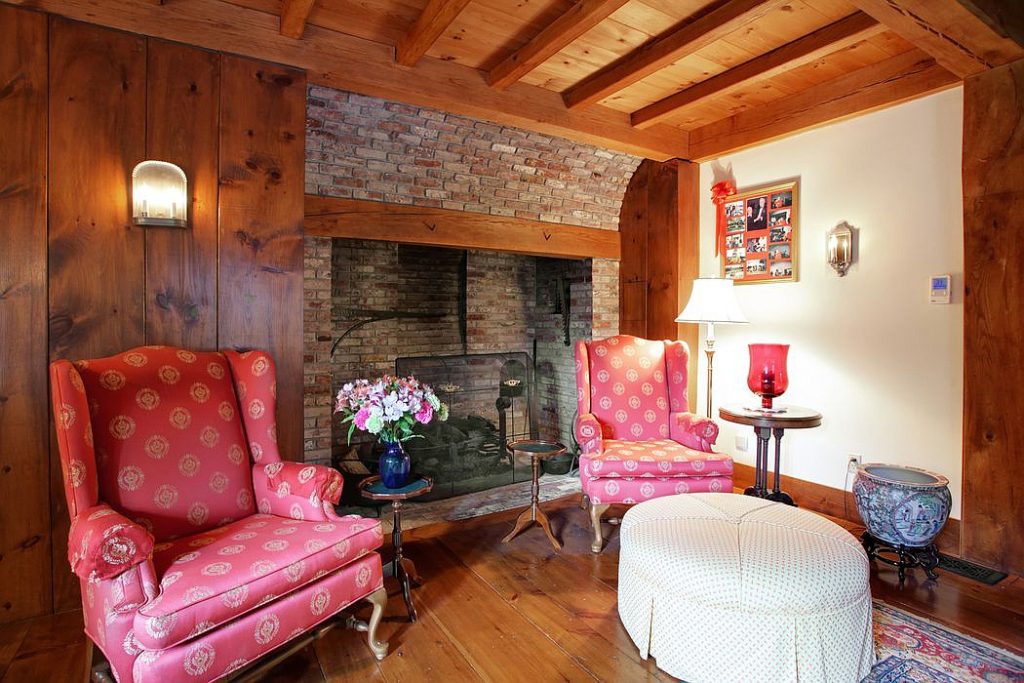 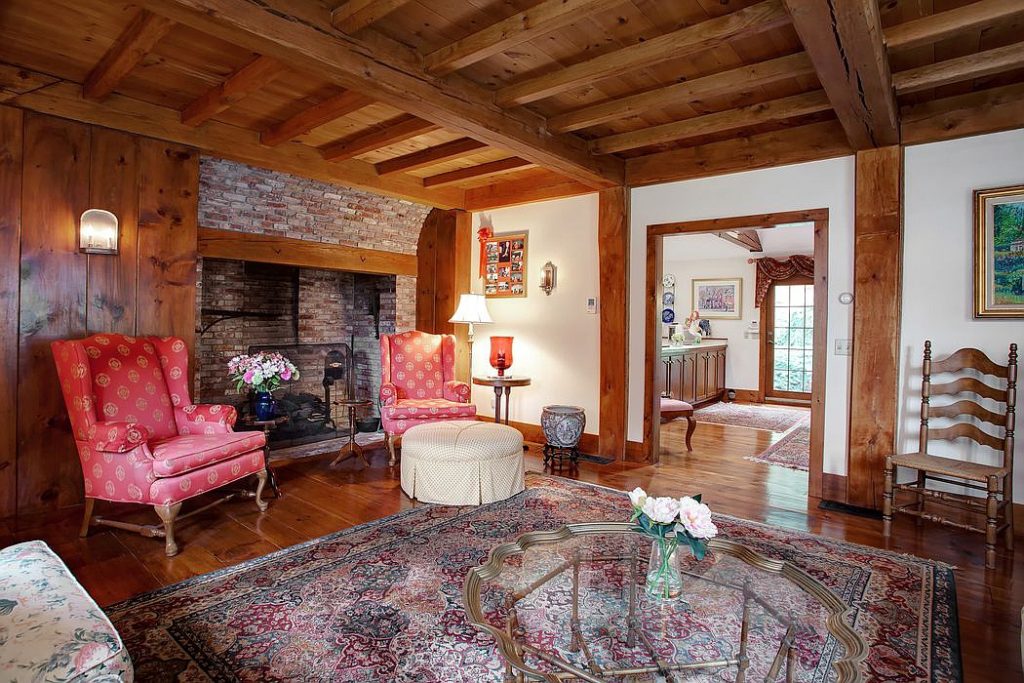 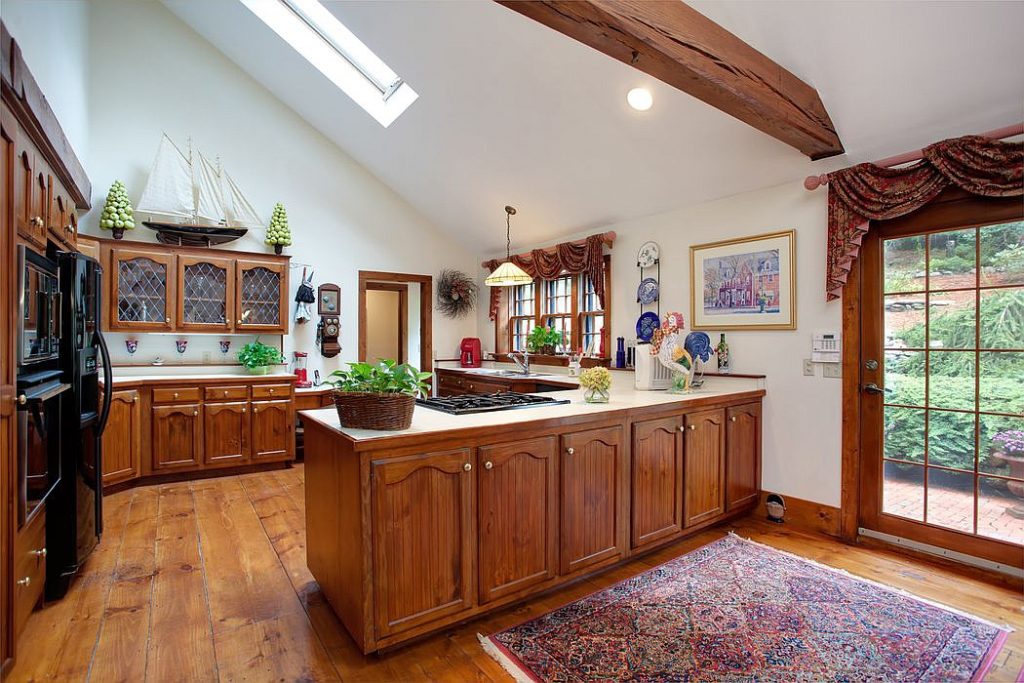 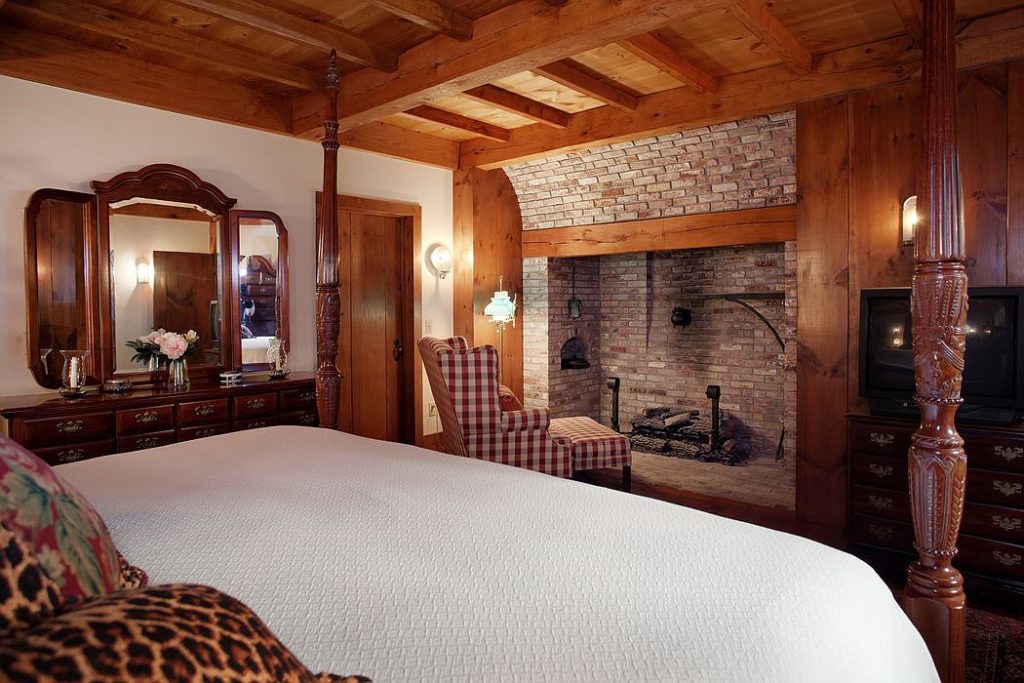 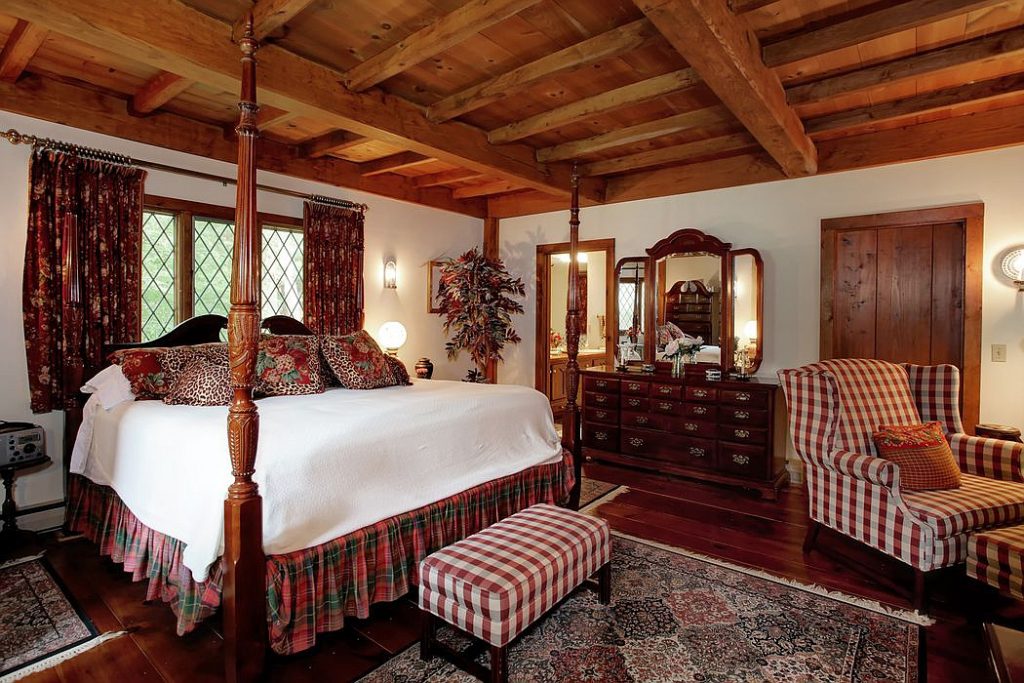 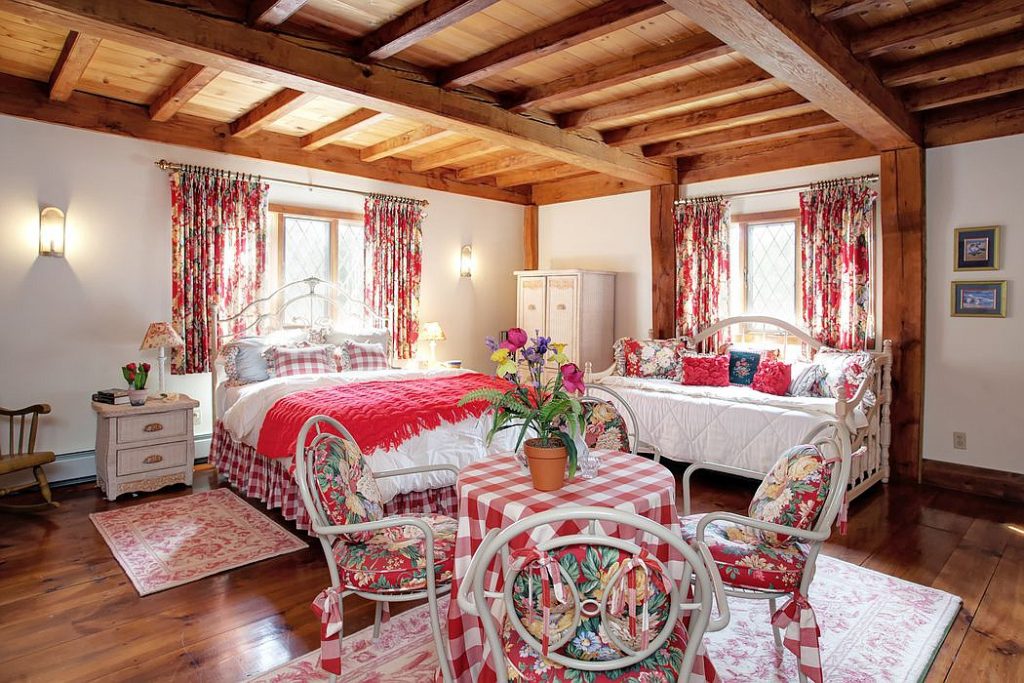 And in the rear, we see the historically accurate salt box slope, which is copied in the detached garage. 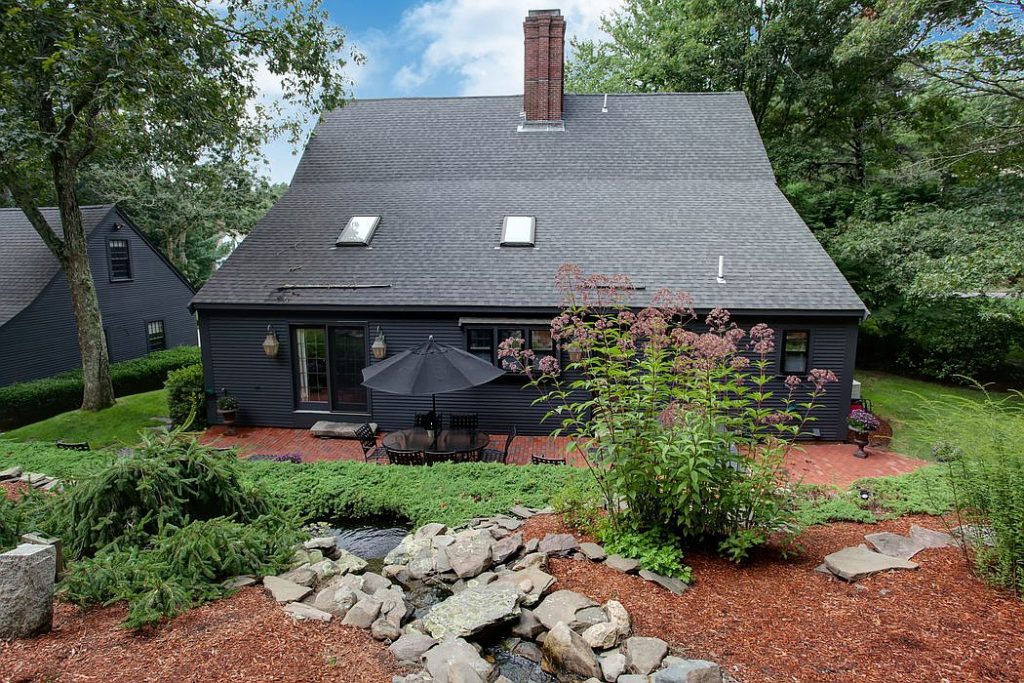 I’d happily live in the garage! 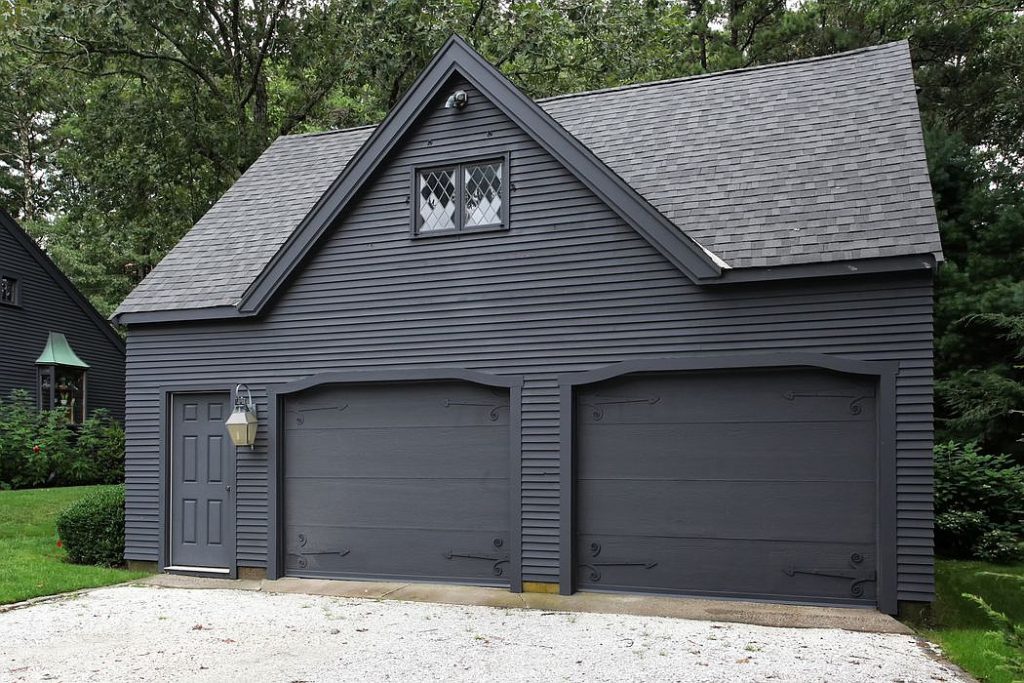 And, the Sandwich, MA house isn’t the only replica of the Salem Witch House. This example is in Hollis, NH. It was built in 1978 and is 3,398 sq. ft. Reclaimed beams from a Milford, NH Baptist Church were used & hand notched in the open beam construction on the first floor and again in the master bedroom. 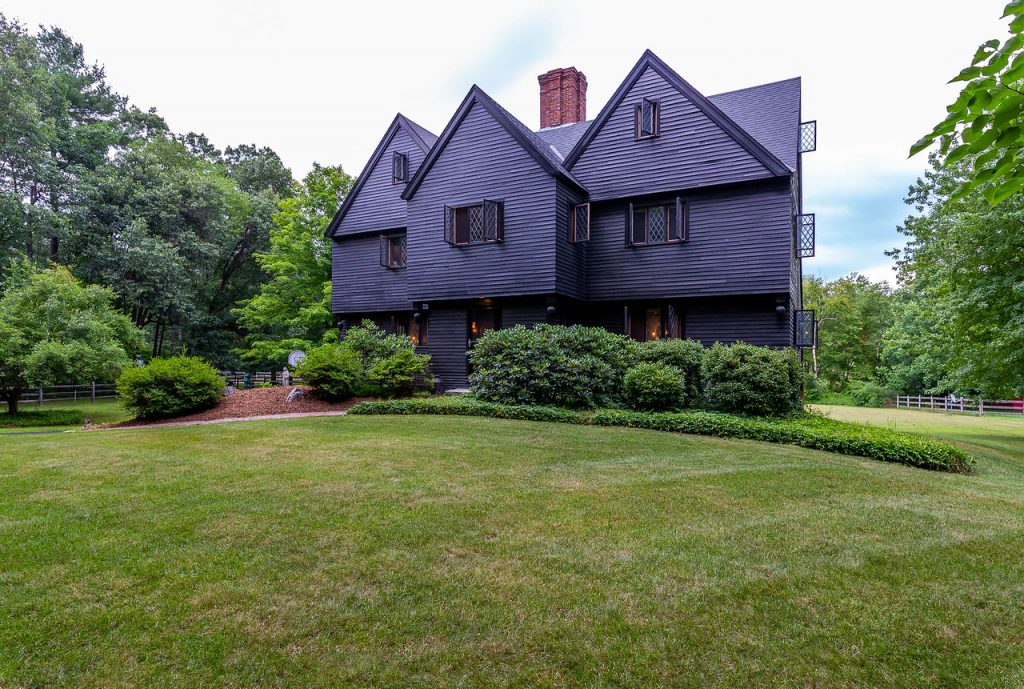 The house does have a modified salt box rear, but is not a slavish re-creation of the original. 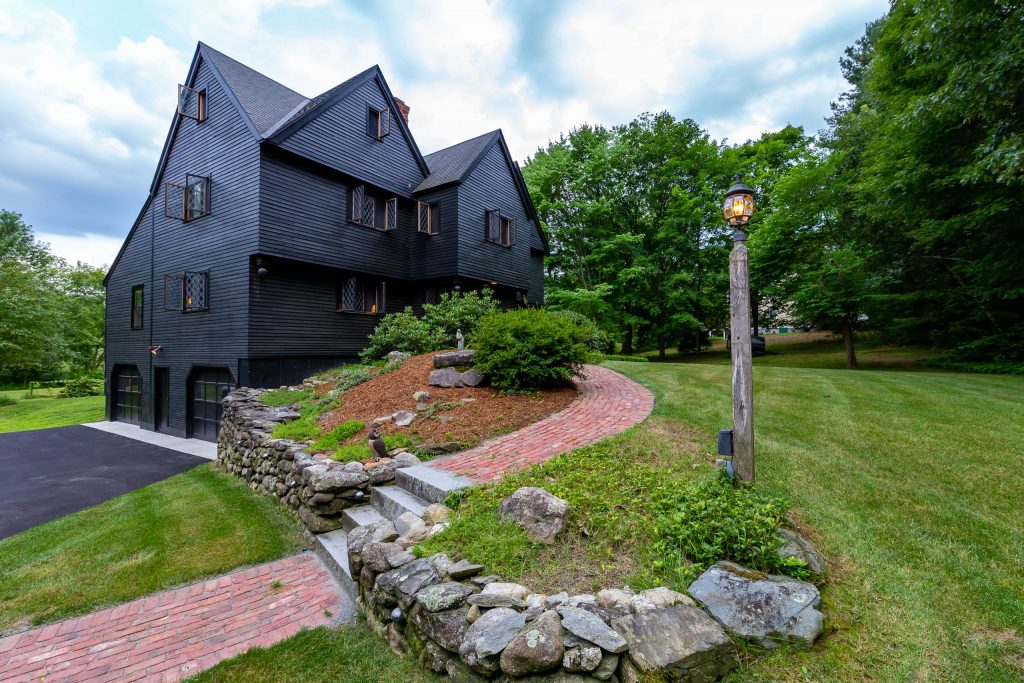 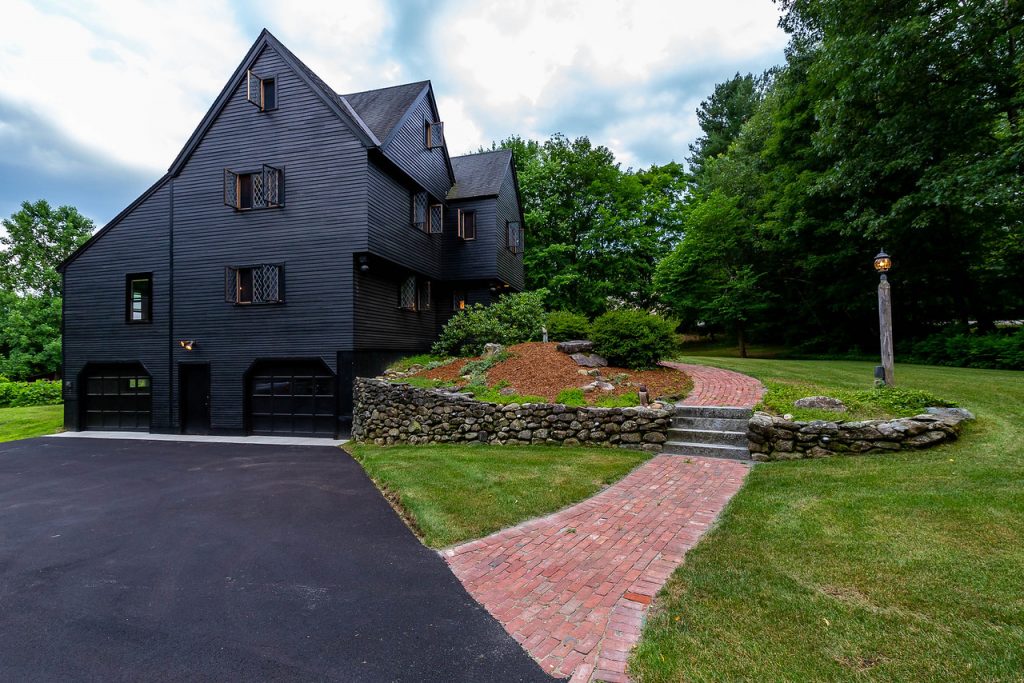 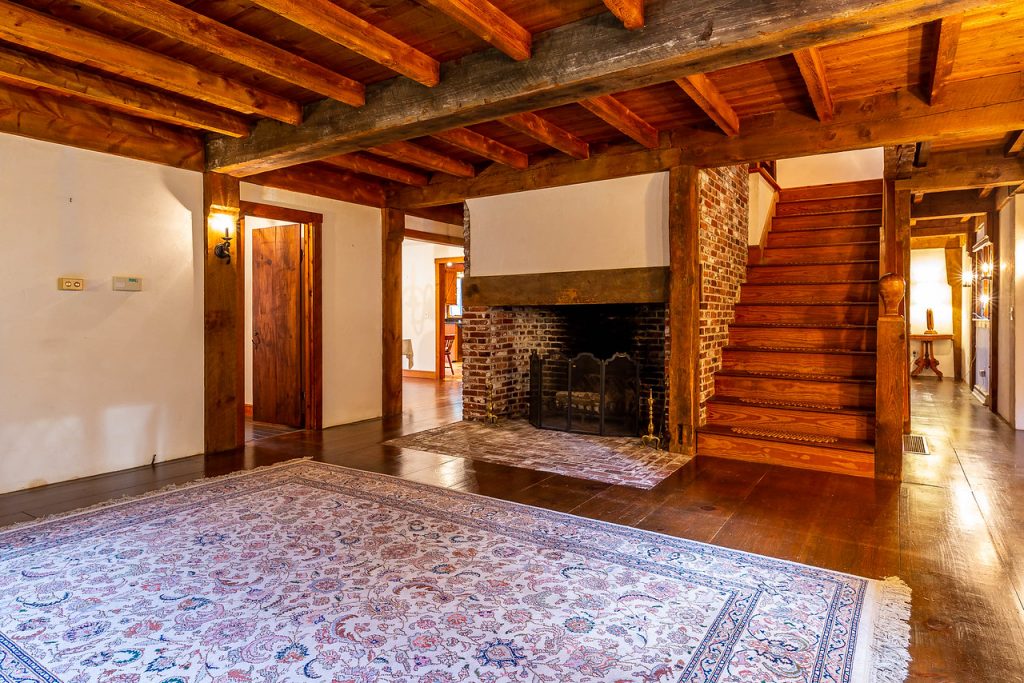 These photos are by Jeff Morton Photography and there are many more here.  You will see that they did not carry the historical accuracy throughout the house and some smaller rooms are definitely 1970’s Colonial in style.

Often here in New England, our homes are historical in reality or recreations. But, they can also feel kind of “musty” in their interior decorations. How do these homes get updated for more modern and fresher tastes? Check out my post on ideas for modern living in an antique home.  And no, they won’t be swathed in gray paint with faux-Belgian style furniture! A few years ago, I wrote about this modern interior in an 1860 Colonial revival house, also in Sandwich. I didn’t mind it in that house, but I wouldn’t want the interior of the Witch House to be opened up and overly modernized.

Would you want to live in this style house? What do you think of black or dark charcoal paint on a house in general?

14 thoughts on “The Salem Witch House – Replicas and Modern Living”