Well – there’a a question: Will a designer work with what I own? And the answer is – most designers will. As with all things in interior design there is a range. At one end are those designers who are hired for their vision, for their style. A famous example is architect Frank Lloyd Wright who not only designed the buildings but all the interior design and furnishings, most famously Falling Water in Pennsylvania.

Frank Lloyd Wright’s vision was so singular and clear that he needed to be in charge of everything. One doesn’t hire a designer of that magnitude and expect the old barcalounger to be incorporated – no matter how comfy. 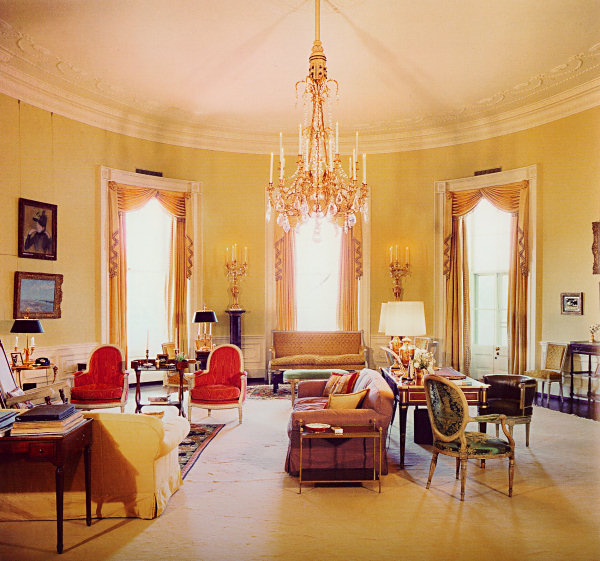 Famed American 20th century designer Sister Parish, who worked with Jackie Kennedy on the White House redecorating, famously would start a project by going through a new client’s rooms with a tea cart, removing items that absolutely could not be kept. Which of course means she was willing to use some of what was there – so long as it worked.

And that’s really what most designers do. If it works and you want to keep it, then fine. But if it doesn’t work, we’ll explain why and hope you respect our advice. And the fact is, if you hire a professional, then you really should respect their opinion on whether something works.

On the other end of the spectrum are those who provide “decorating in a day” type services where they will use only what you have and move things around. There is a real art to this as well – to see the possibilities and make things look fresh and new, even if they’ve sat where they are for twenty years. This too requires the homeowner to “let go” of their pre-conceived notions of where things should go and how rooms should be used. Because the decorator will only be successful if they are allowed to really move your stuff around.

The vast middle, however, is where the rest of us live. A big empty house might be a dream job, but they don’t happen that often. I did this project from scratch and it was a lot of fun! But most every other comes with the request “will you work with what I own”? And, like everyone else, I’ll do my best and be clear when something doesn’t work.

This project above, in Duxbury, MA,  was mostly incorporating what the client owned because they’d been long time collectors of antiques, art and collectibles, family heirlooms and interesting items. My job was to flesh out the space with new custom furnishings, pillows, dining table and some storage pieces and bring it all together into a comfy, cohesive home.  The two arm chairs above were actually not originally a set. The chair on the right was slightly larger than the other and had rolled arms. I had my upholsterer reconfigure the arms to match the English arm style of the other chair and put the same fabric on both – resulting in what looked like a matched pair. Good chairs are always worth getting re-upholstered and the styling can be changed. 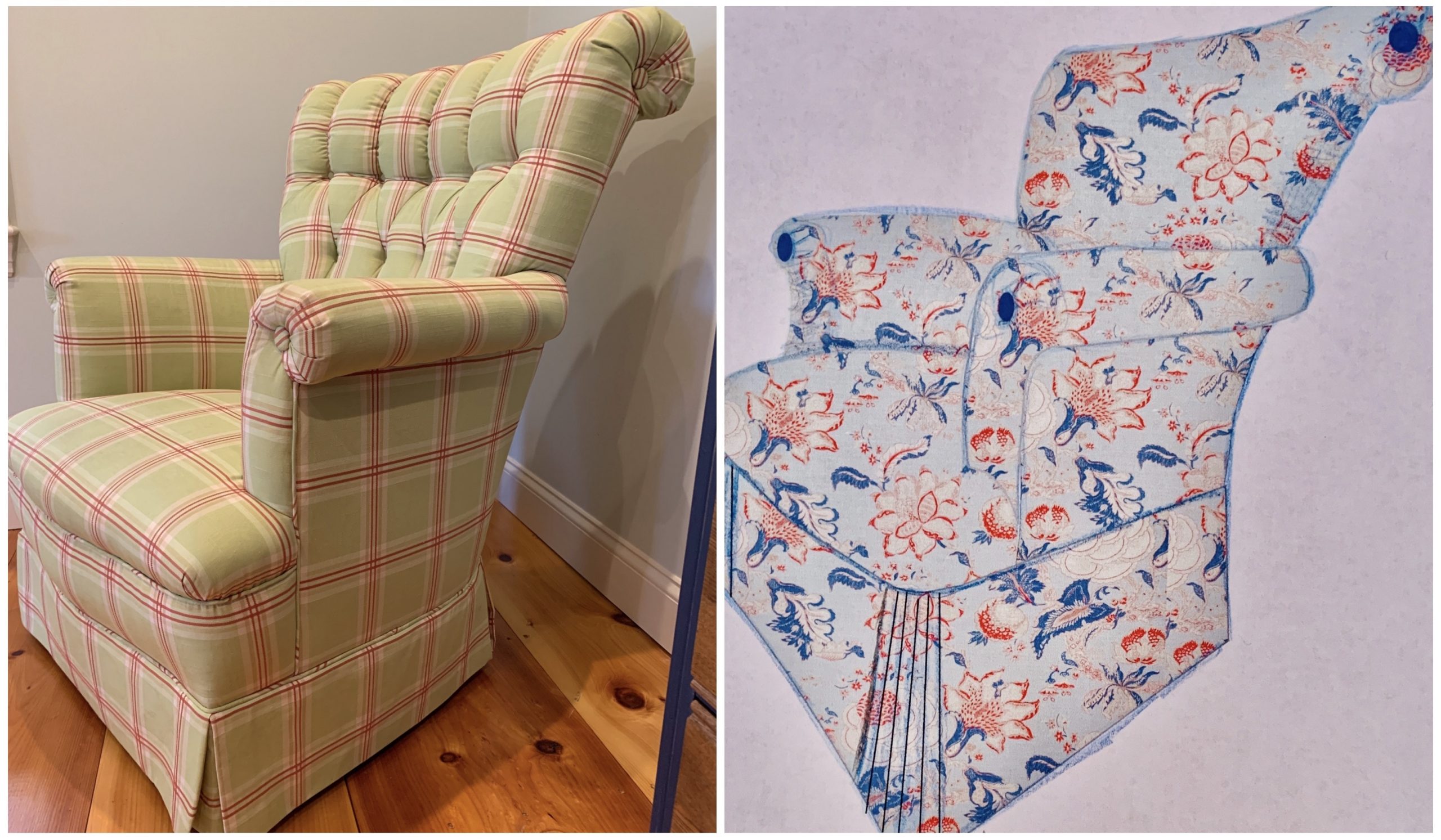 As a matter of fact, this is a project I am currently working on. My client has this cute upholstered chair with tufted back. The fabric does not work in the new bedroom so my sketch above is what I’m proposing. A fresh pretty fabric with updated details like raising the skirt hem up on the chair and adding cute pleats in the front corners, added contrast welting will make this chair brand new again. So yes, I do work with what my clients own – so long as it works or can be re-made to work. 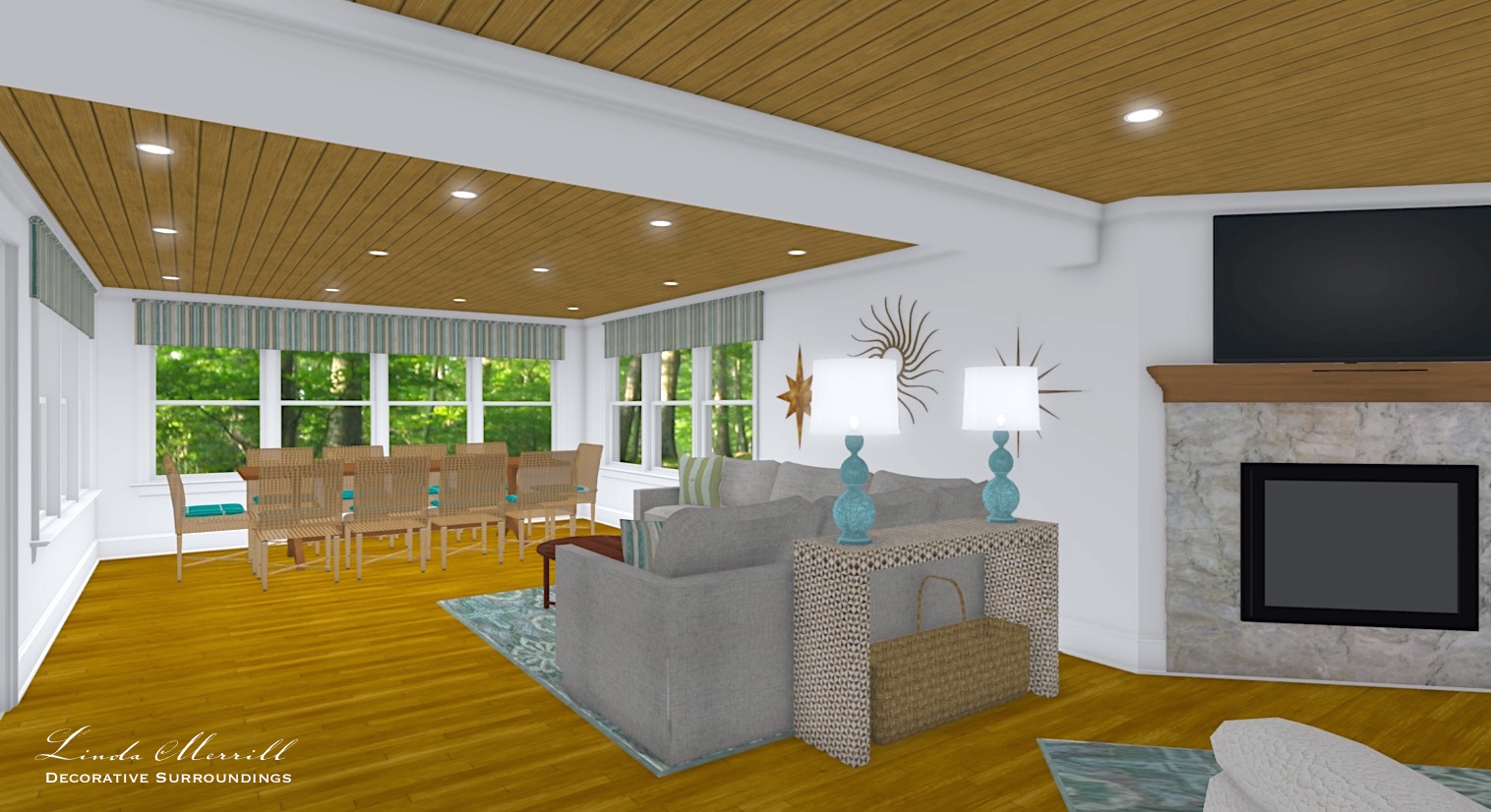 Another little story – I did a quick design plan for some clients last year for a sunroom addition they’d put on. Mrs. Client wanted a dining table with seating for ten as they love hosting casual dinner parties. They’d sort of shot the budget on the renovation, which also included a kitchen, so the table and chairs sort of got back burnered – which can happen. Just before the Covid shut down, she reached out again about re-visiting what they should do for a table and chairs. Once everything got shut down, they weren’t entertaining anyway, so back burnered again.  I was at their house briefly a couple of weeks ago (Mr. Client is my tax man) and ask her if she wanted to pick it up again. Due to some unexpected flooding, she was again needing to put it on hold. Meanwhile, we were sitting at a lovely light stained cherry dinner table with ladder back/rush seat chairs  – English country. This was from her parents formal dining room – so she though of it only as a formal set. Yet, it was a country style (not dark mahogany in other words) and was the perfect size and scale for the sunroom. She just needed to “see” the table in a different light – not as formal, fancy furniture to only be used on Sundays and holidays – but as 50/60 year old pieces that were perfect for the space – and best yet – FREE! It’s all in how we look at things.

So, the takeaway? Yes, most designers WILL work with what you own, but if you want the best outcome, you’ve got to remain flexible about which items can work and which can’t and remain open-minded about repurposing what you can.

10 Tips for working with an interior designer.

5 Tips for Hiring the Right Interior Designer For You

11 thoughts on “Will A Designer Work With What I Own?”