What is design for accessible and universal living? I’ll start with what it’s not:

When my parents were in their late 50’s, where I am now, they sold their two-story eight room colonial on the South Shore of Massachusetts and purchased what they intended to be their retirement home – a one-story on Cape Cod. They were years away from retirement and when they did retire, they pursued volunteer and other activities that interested them such as the flying lessons my dad was taking to finally achieve his life long goal of getting his pilot’s license. When he was 75, my dad suffered a stroke that left him partially paralyzed on his left side. So much for that pilot’s license. But, in the moment, that was of little concern. The big concern was that initially the docs didn’t think he’d walk again. I’ll never forget going over to their house and my Mom meeting me at the door with that news. He spent two weeks in the hospital and then 2+ months at the amazing Spaulding rehab hospital, which was conveniently located in their town.

I started eyeballing the doors and main bathroom in their house to figure out if he could live there in a wheelchair. This was the larger of their two bathrooms and their only shower. My mom started contemplating life with him in a nursing home. 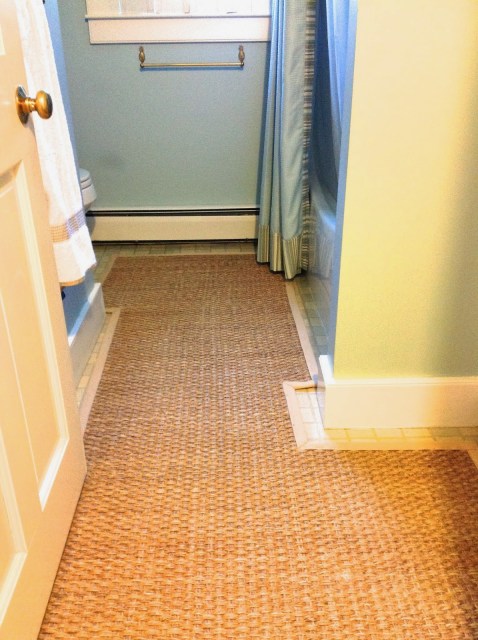 With luck, amazing medical care, and, not the least Dad’s determination, he was able to walk (with assistance) out of the rehab hospital and back home where he lived comfortably and safely for the next 9 years until his passing. What you can’t see in this photo are the utilitarian grab bars that were installed by the toilet and shower. (Note: the rug was a later addition when I gave the bathroom a little facelift after his passing.) I will share that he had a heart attack 1 year before he passed away. The night he returned from another short stint in rehab, his legs gave out underneath him from exhaustion trying to make it to the toilet. My Mom tried to get him on to the toilet before he sunk down too low, but couldn’t and called to me. At one point, the three of us were crowded in this little space by the toilet trying to get him comfortably and safely to the floor, at which point I called the paramedics to help get him up and to bed. Dad, meanwhile, made sure that when I called 911 I told them it wasn’t an emergency and no need to rush. I sure do miss my dad.

This bathroom was not designed for universal and accessible living. Simply put, universal design, aka accessible design, is design that works for all those who live in or visit a home. The rest of their house was actually pretty good for wheel chair use with doors with sufficient width (at least 30IN, but 36 is better) and one-story living. It was a couple of steps into the house, but a ramp could have been added to the front door if it had been needed.

As I’ve been posting, I’m designing my fantasy Dream Home. I was thinking about my Dad and realized that I hadn’t been giving any thought to design for accessible and universal living. I quipped that I wasn’t getting any younger, so a one-story plan made sense. But that was as far as I went. It’s fitting that it’s Father’s Day this week and in honor of my dad, and in order to pursue the goal of good design, I made some changes. (Final is never final in a fantasy project, apparently!) 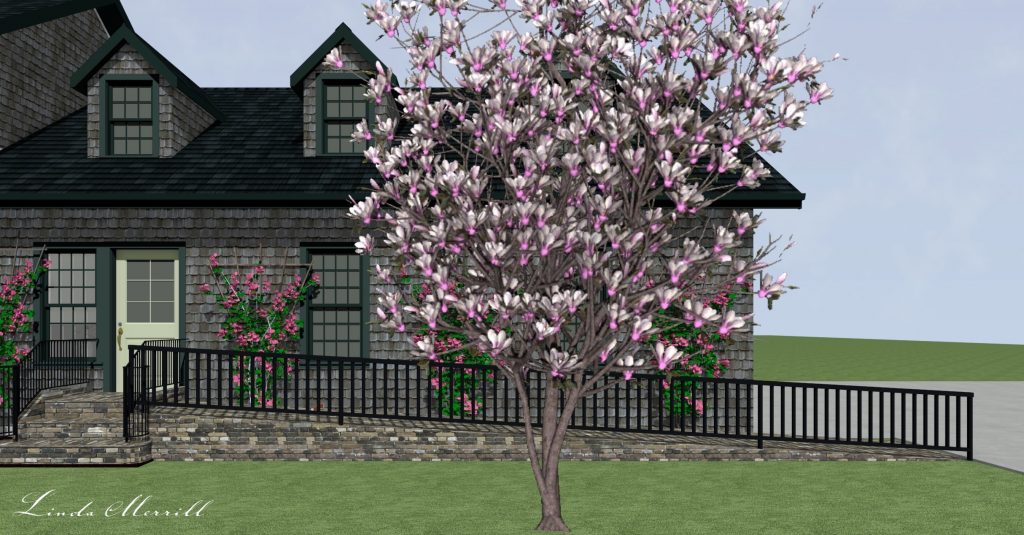 A new build, or extensive remodel, is the perfect time to put into place the needed elements of design for all. In this case, it’s simple enough to add a ramp from the driveway to the side door straight into the mudroom. Some strategic landscaping (to come in the future) will make a ramp fit nicely with the exterior. 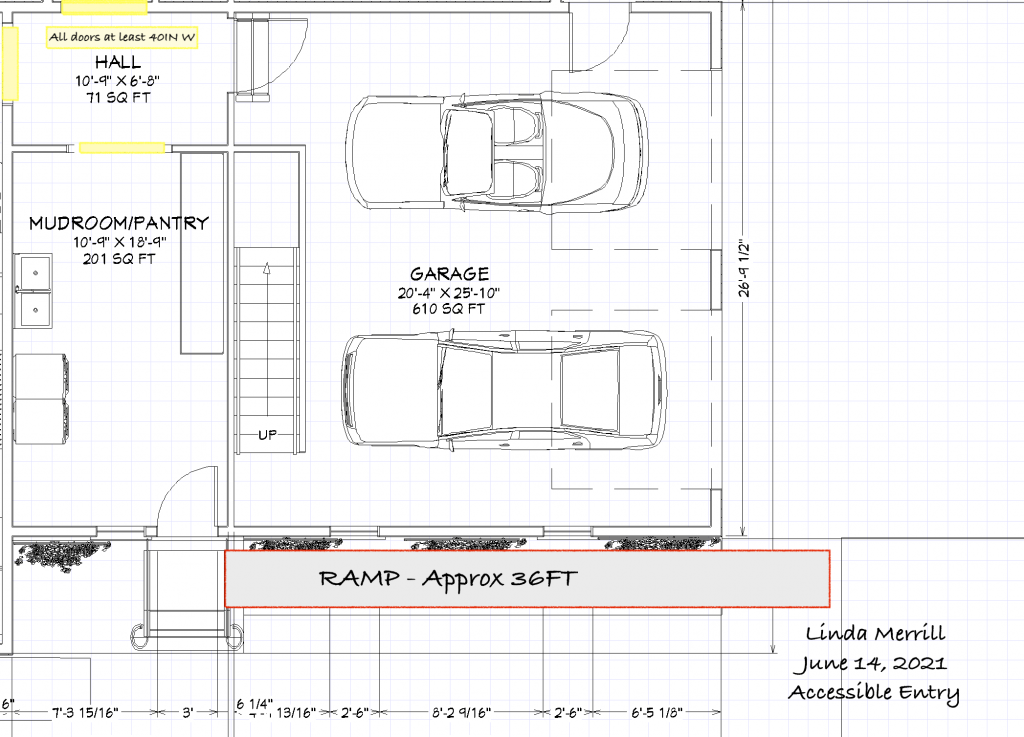 A ramp should be 1 foot in length for every inch in height it leads to. So, if the front door is 30-36 inches off the ground, then the ramp needs to be 30-36 feet long. Of course, not every house will accommodate this length, but switch backs can be built. I still need to work on the steps and railings to the front doors, but this is the general idea.

So, now, what to do about a fully accessible bathroom ? I’ve previously declared that I had finalized my floorplan and had changed the guest wing to have three guest bedrooms, all sharing one bathroom. Not really ideal especially for a fantasy project with no budget constraints. I was, however, determined not to keep increasing the square footage.

Enter the pool house. I was thinking this would be the last space I’d design, but got inspired and ended up with a pool house/guest house with a super cute bunk room with four berths. (See at bottom for renderings of the whole space). 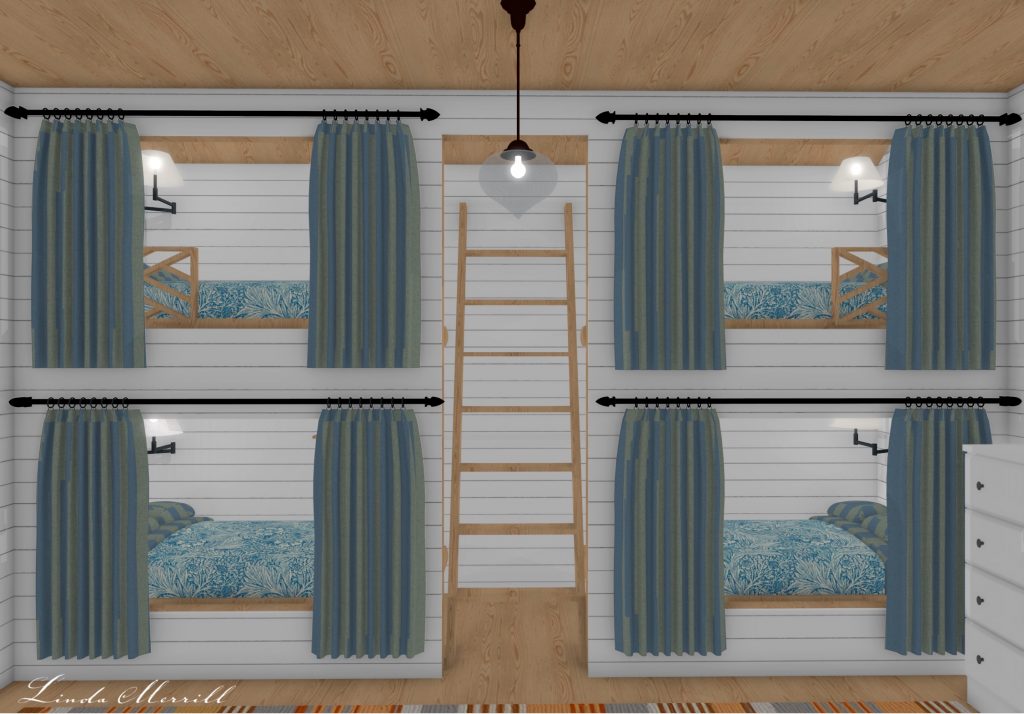 Once this happened, I realized that the guest wing needed only two bedrooms that were more gracious than the rabbit warren I’d designed when trying to shoehorn in three bedrooms. And now, each guest room has its own ensuite bathroom! 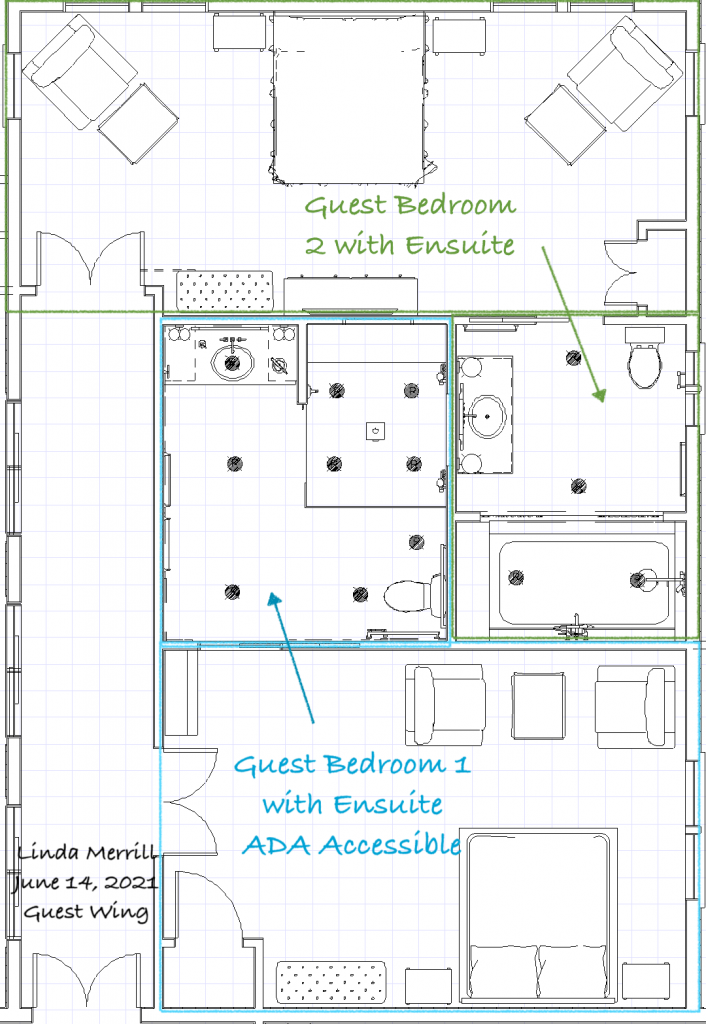 Guest Bedroom 1 is now large enough to be fully accessible for someone in a wheelchair, should it be necessary. I haven’t worked on the bedroom yet, but I did spend time designing the bathroom to be both beautiful and functional for all.

I still have a lot of details to work out and I’m not entirely sold on the floor tile (placeholder), woodwork color or all the subway tile. I do worry it will look a little too “medical” with so much tile. But I’ve followed the rules of the ADA (American’s with Disability Act) for widths, heights, placement of grab bars, etc. By the way, I’ll include some links at the bottom with lots of great information.

The vanity is 34IN high versus the standard 36IN with space for a wheelchair to roll in. Not too low for an average height person, but comfortable from a seated position. The faucet handles are levers which are easier to use for someone with dexterity issues related to age, disability or arthritis. The shower floor is a different tile than the main floor to create a visual boundary for someone with impaired vision.

The grab bars and towel rods can all be decorative from the same collection with the same finishes – no need for utilitarian looking ones. The door is a 36IN wide pocket door. I added the transom window over the door since the room has no other windows (the only thing lacking in this space!).

There is room in both the shower room and the toilet room to accommodate a wheel chair and a helper if that were needed. Handheld shower wands and wall niches for shampoos and soap are easily reachable from a seated position. But I do believe anyone using this space would find it luxurious and comfortable. I still have to finalize many details and confirm measurements, but this is substantially the design (if not decorative choices).

Probably the biggest worry over making a room accessible is that it will look like a hospital or nursing home and that’s just not the case.

How beautiful is this shower/bath space by CARNEMARK design +build which they’ve dubbed “Lifetime of Comfort“. Such a nice way of putting it. I always worry about getting in and out of a deep bathtub – but even the tub has strategically placed and sleek grab bars.

If you’re building or renovating, it’s a great time to figure out where grab bars might be needed in the future and have the builders put in blocking in the walls so they could be added later much more easily.

Here are some resources I discovered as I’ve been working on this design for accessible and universal living:

The other guest room ensuite is a smaller room, but does have windows. I am adding a tub to this bathroom however. It’s nice to have at least one in the house.

Unlike the other bathrooms, this one will be softer with shower curtains and there will be roman shades and shutters on the windows. The busy tile is all placeholder but the color palette in this bathroom and the bedroom will be in the green family just as the palette in the other guest bedroom/ensuite will be in the blue family.  I will also add some strategically placed grab bars to aid getting in and out of the tub/shower area. Safety first!

And finally, here’s what the pool house/guest house/Mini-Manse is looking like:

The kitchen would include the following appliances under counter: washer/dryer (those pool towels you know!), refrigerator/freezer drawers, dishwasher and microwave. The tall cabinets on the right would hold dry goods, dishes and other kitchen items. The island would have the microwave, storage for cooking utensils and cutlery. Glassware would be kept on the shelves. The cabinet on the left could be extra towels, etc. The bathroom, which is through the door next to the bunk room, is a work in progress but would have a shower and linen closet.

And looking back toward the big house. I’m debating adding romans to the sliders for privacy. What do you think?

So, that’s the update for my Dream Home.

And a Happy Father’s Day to my daddy, Bob Merrill. I miss you every day. 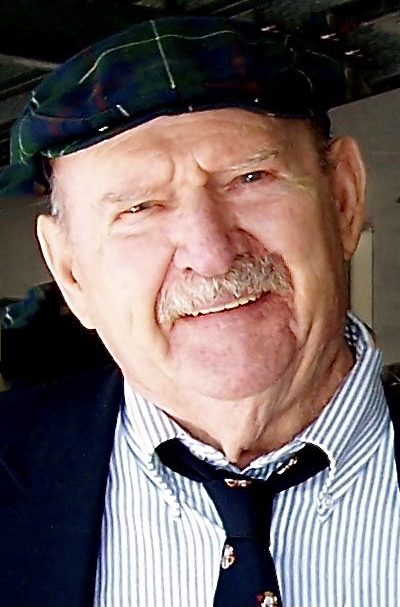 12 thoughts on “Design for Accessible and Universal Living”