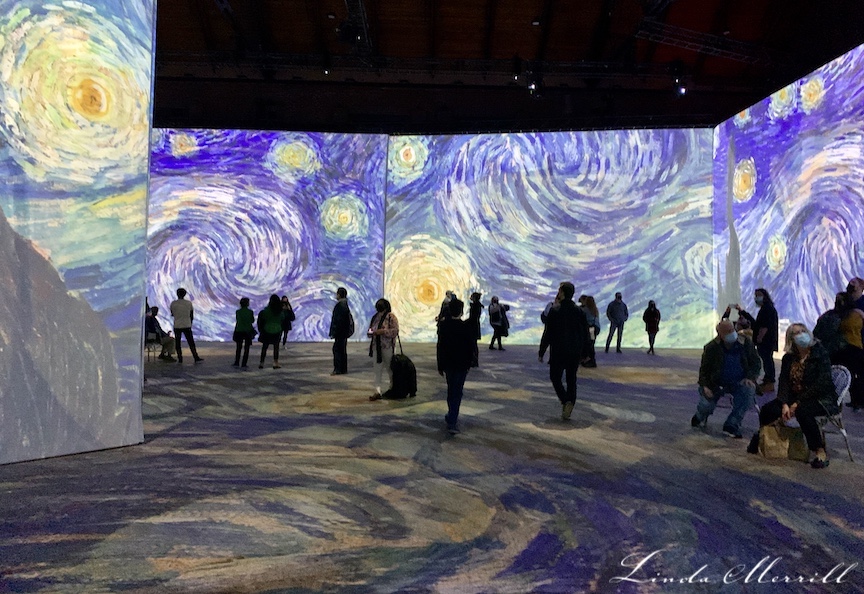 Hello and Happy New Year! I thought I’d end the year with some pretty photos I took yesterday at the Imagine Van Gogh show at the SoWa power station in Boston’s South End. The show includes images of his work projected onto the walls of the space (30 ft. tall screens) in the round, including the floor. I don’t know how the technology works, but you never feel like you’re being blinded by a slide projector. Attendees are able to wander or sit as they are so moved. There were a few chairs for those who needed them. Works done by Van Gogh around 1888-1890 during his time in Provence are the main focus, with music including of the period composers like Satie and Saint-Saëns – French music of this period is some of my favorite so I was in heaven! 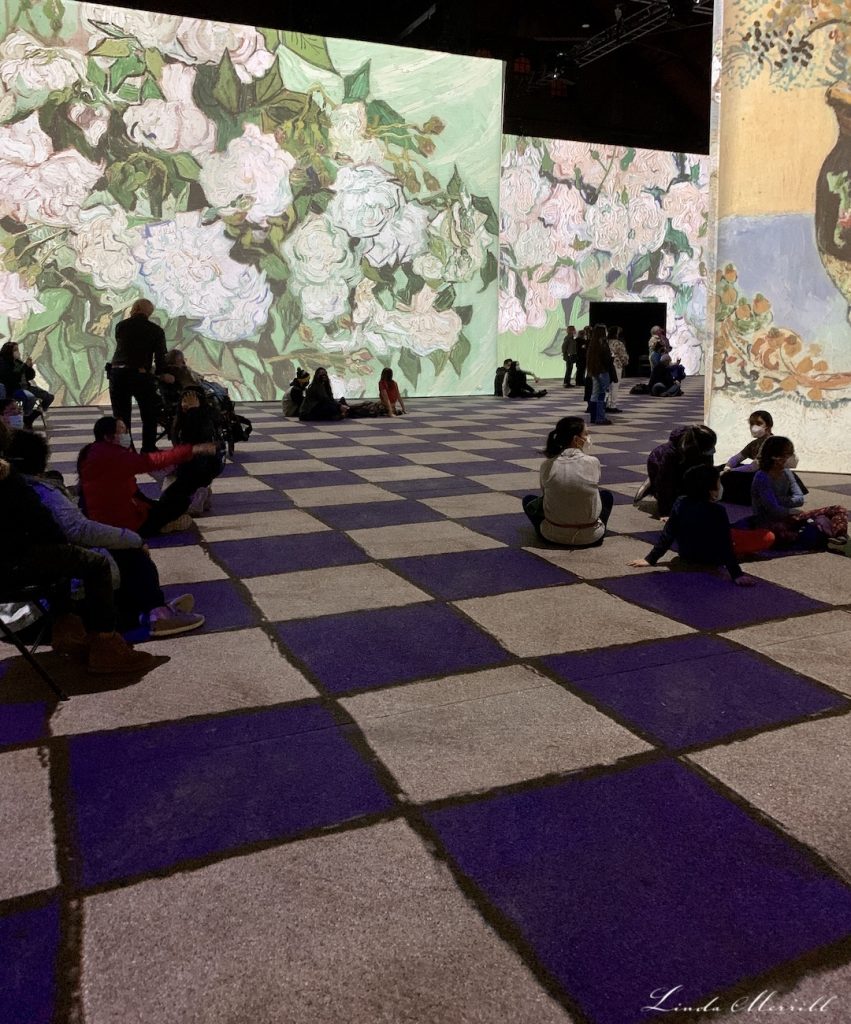 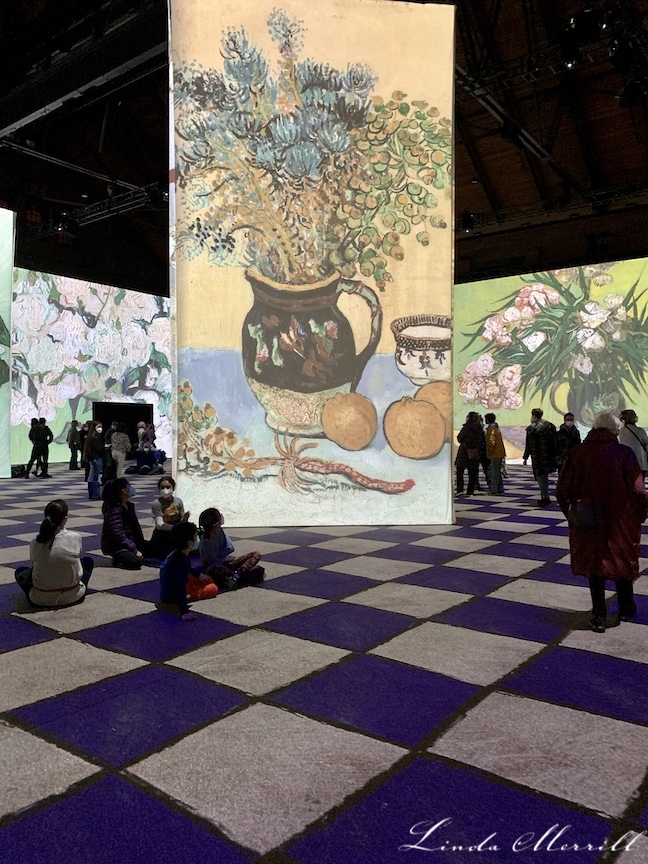 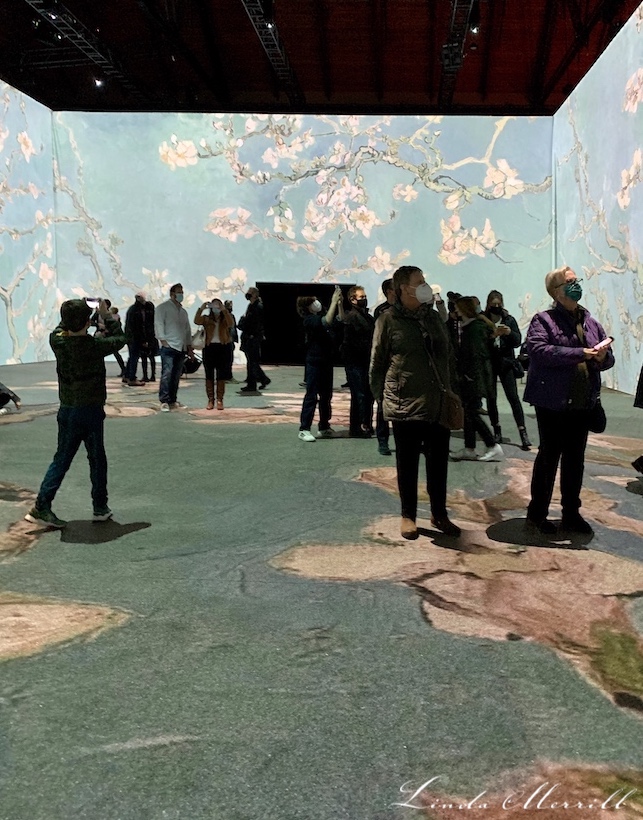 Below and above show the same space just seconds apart. Above is Van Gogh’s Almond Blossom, 1890 – which is a popular wallpaper inspiration. 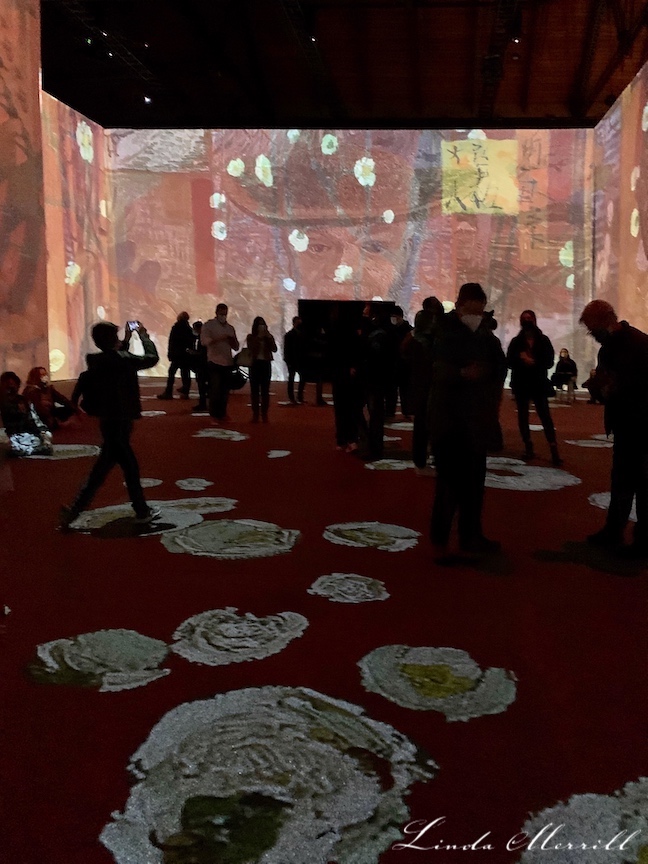 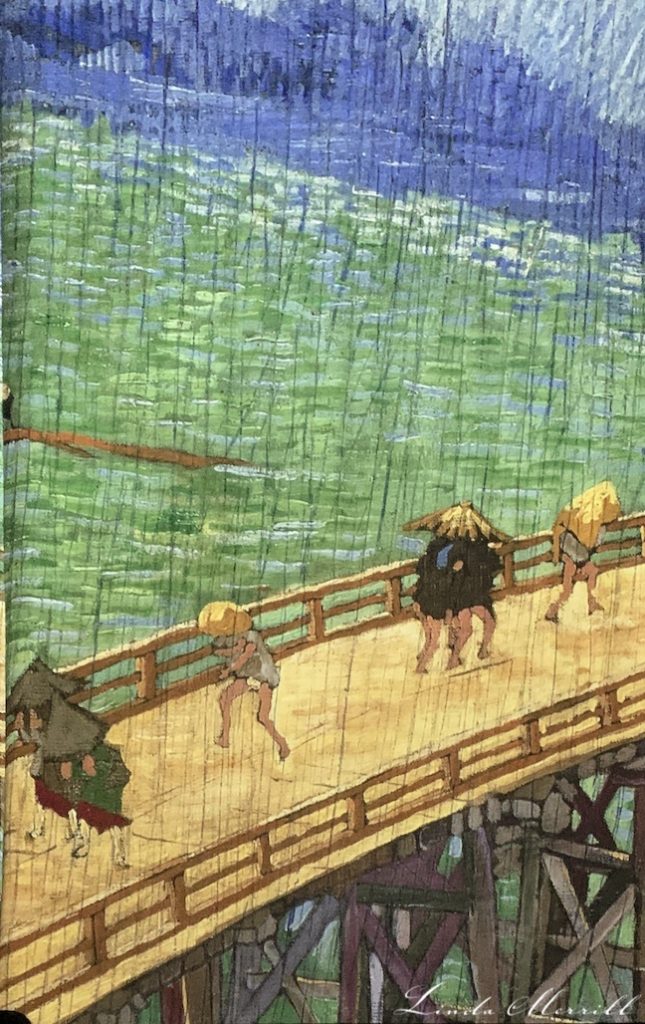 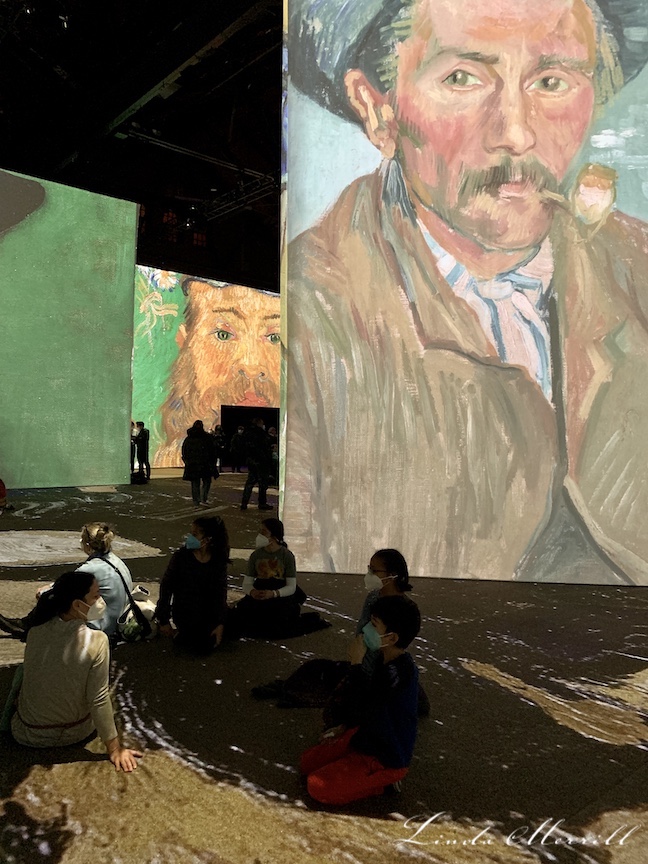 Sunday in the park with Vincent… (reference and reference) 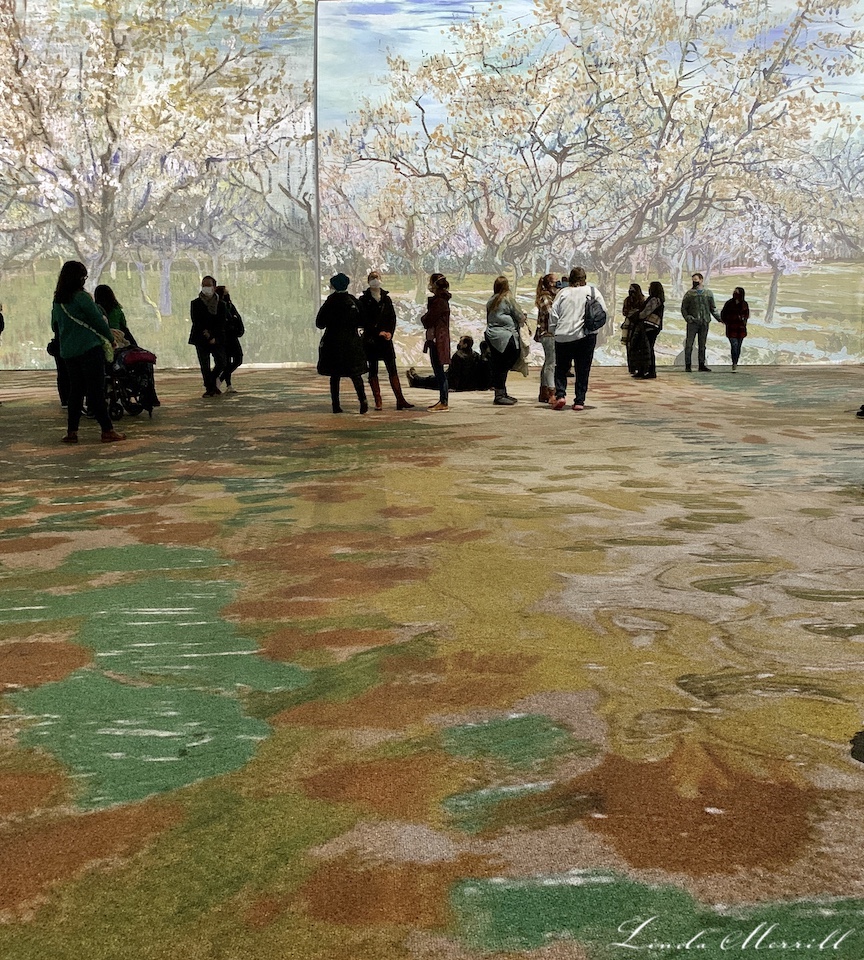 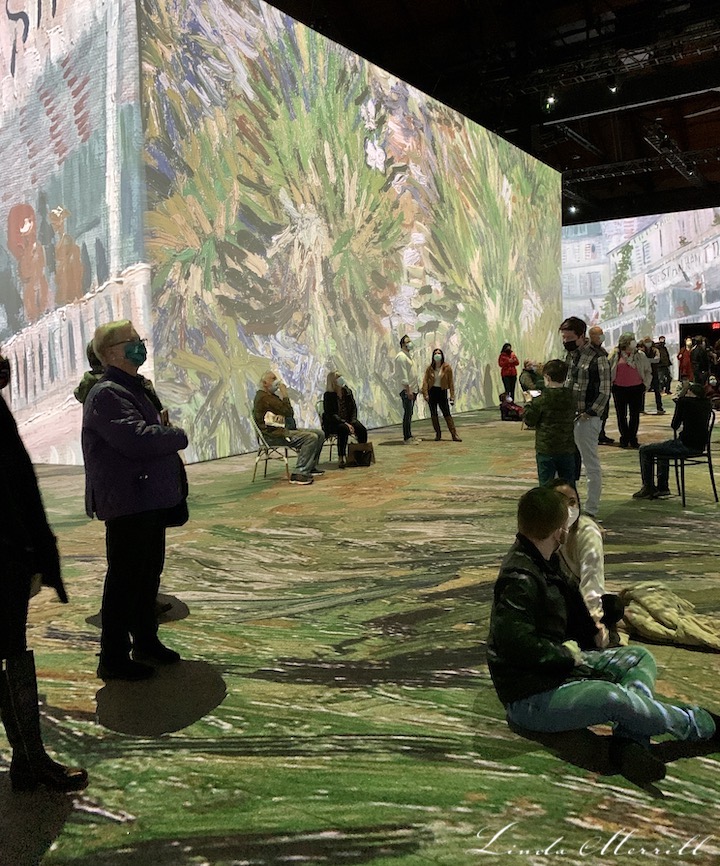 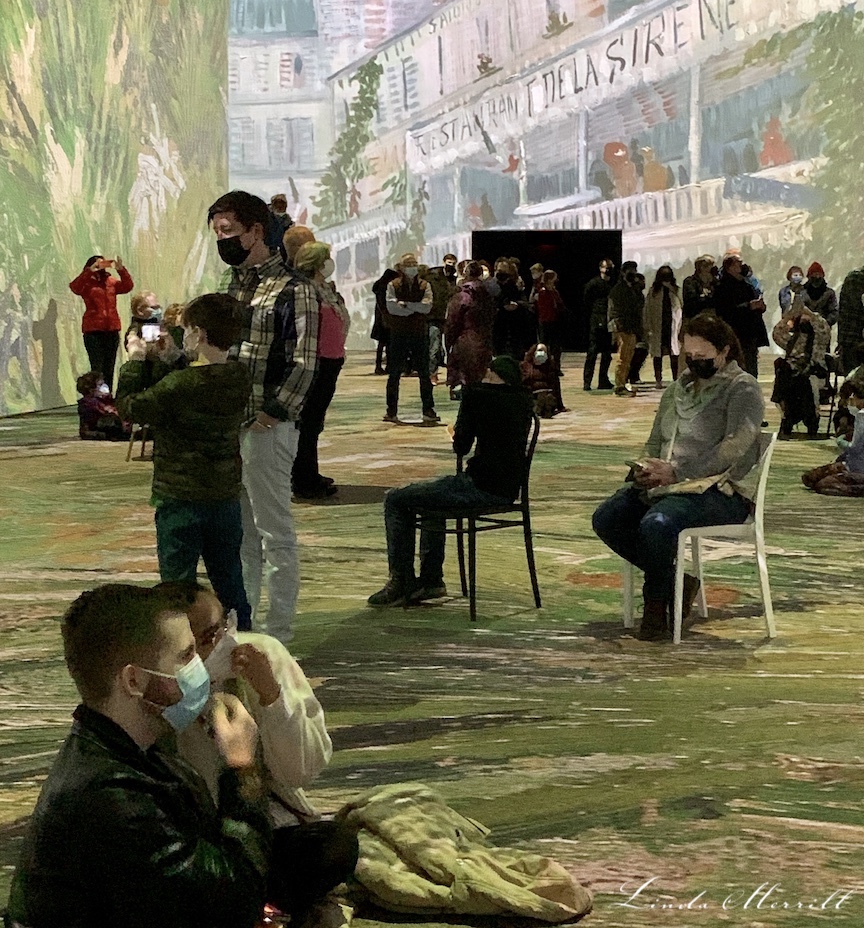 It’s amazing how the mood could change so quickly – which does speak to the mind of Van Gogh. 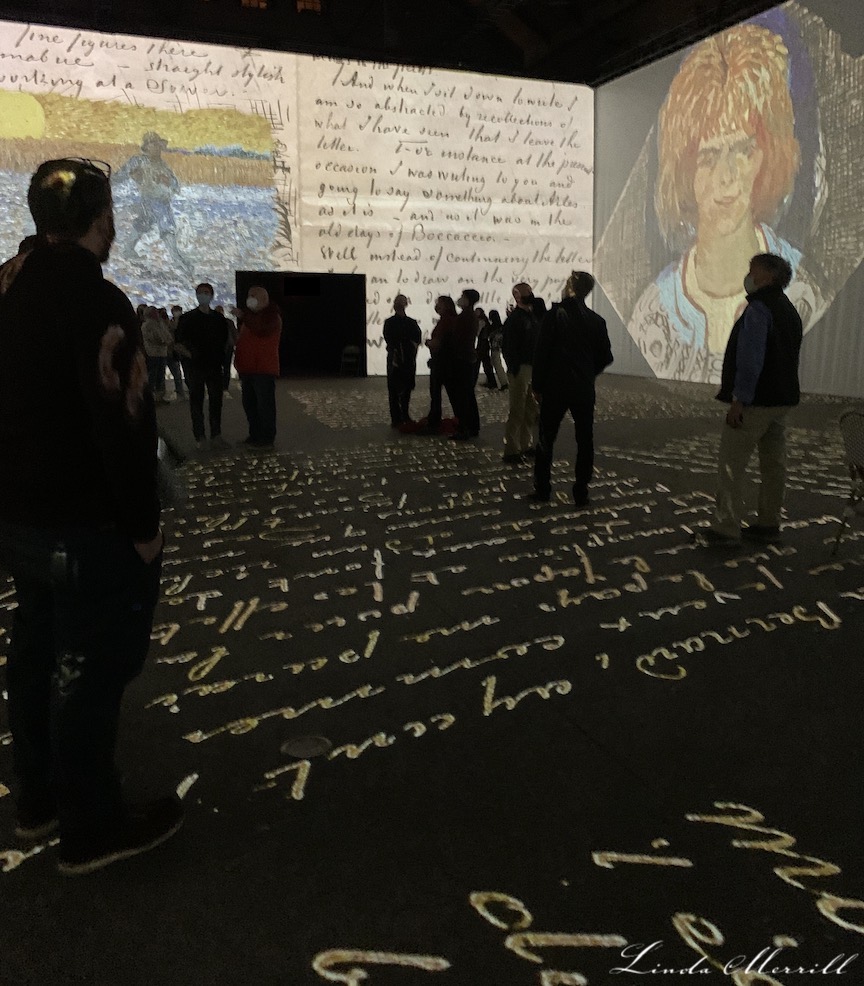 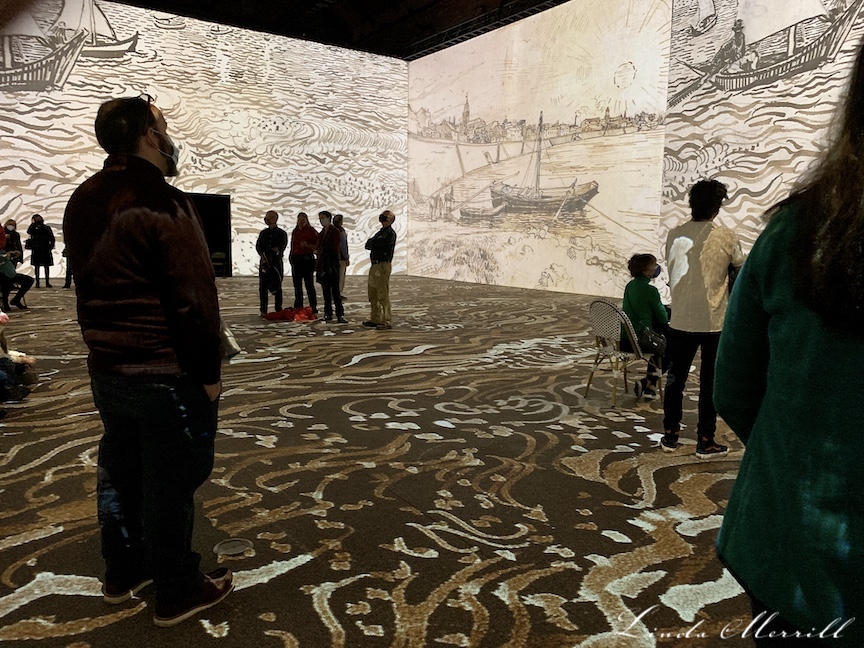 We thought the floor pattern would make an excellent rug! 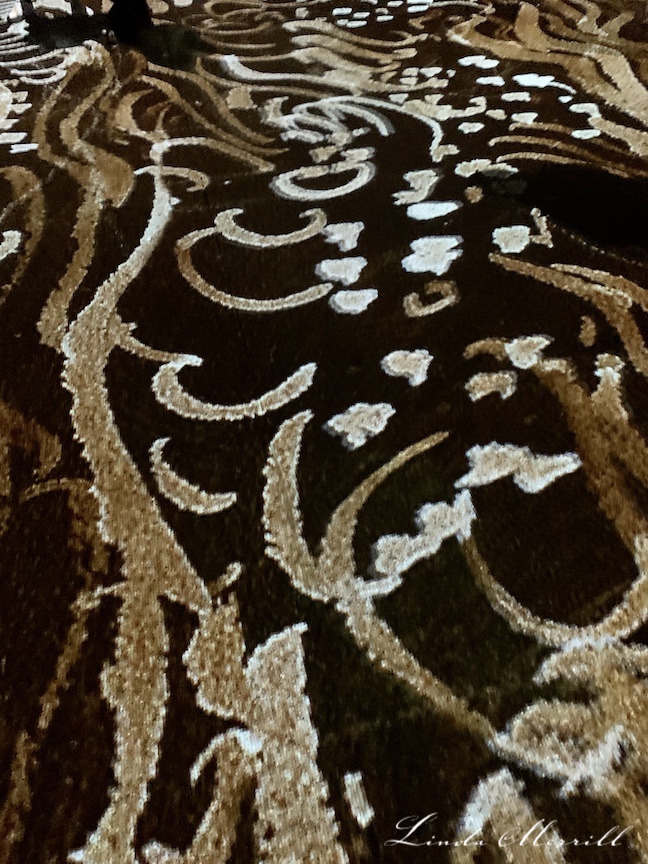 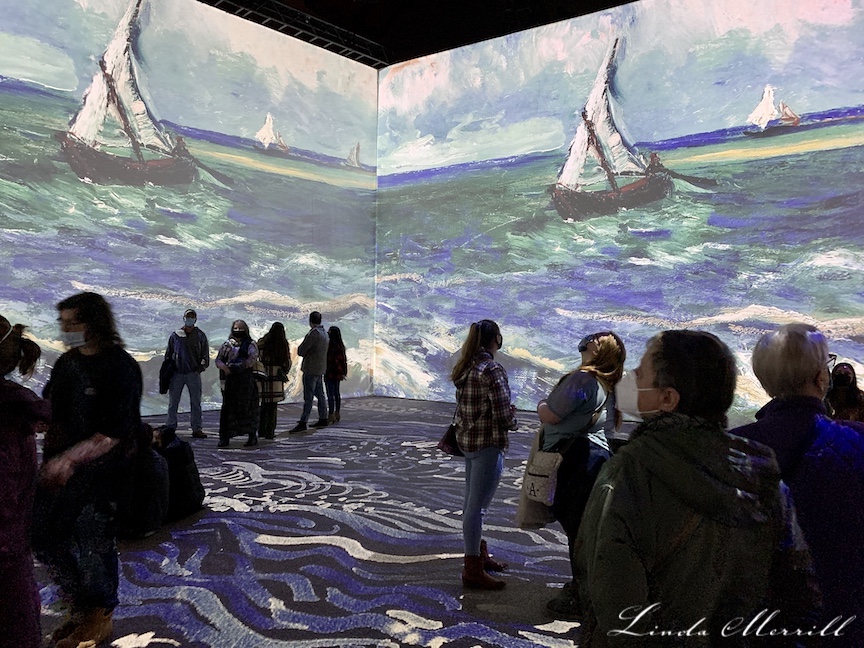 While the images sometimes glided across the screens the floor projections did not move (which would have been terribly disorientating.) 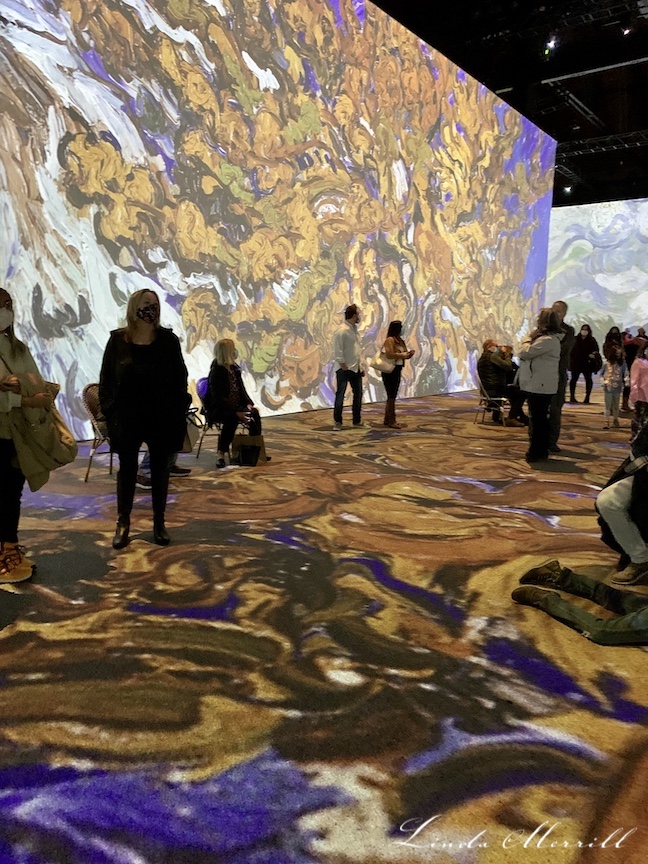 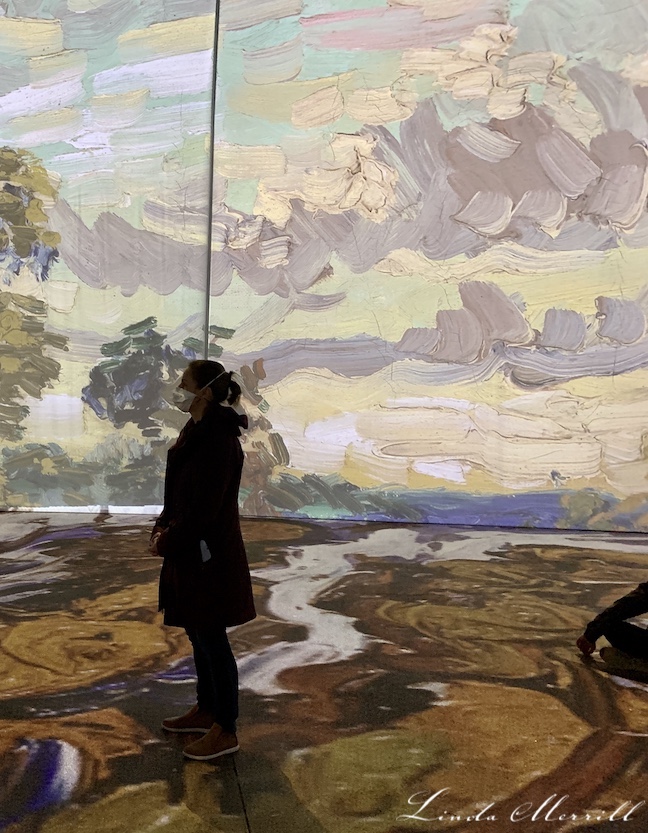 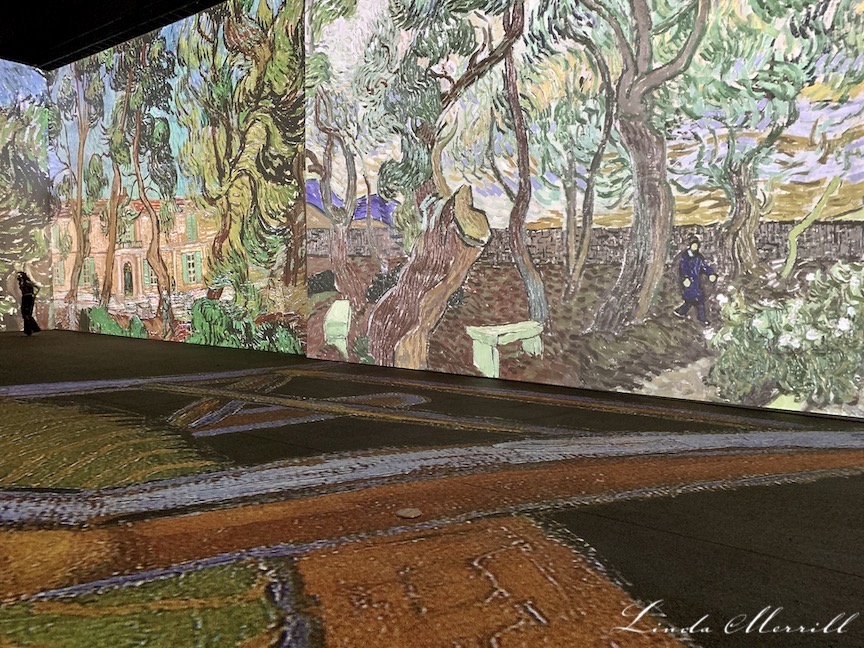 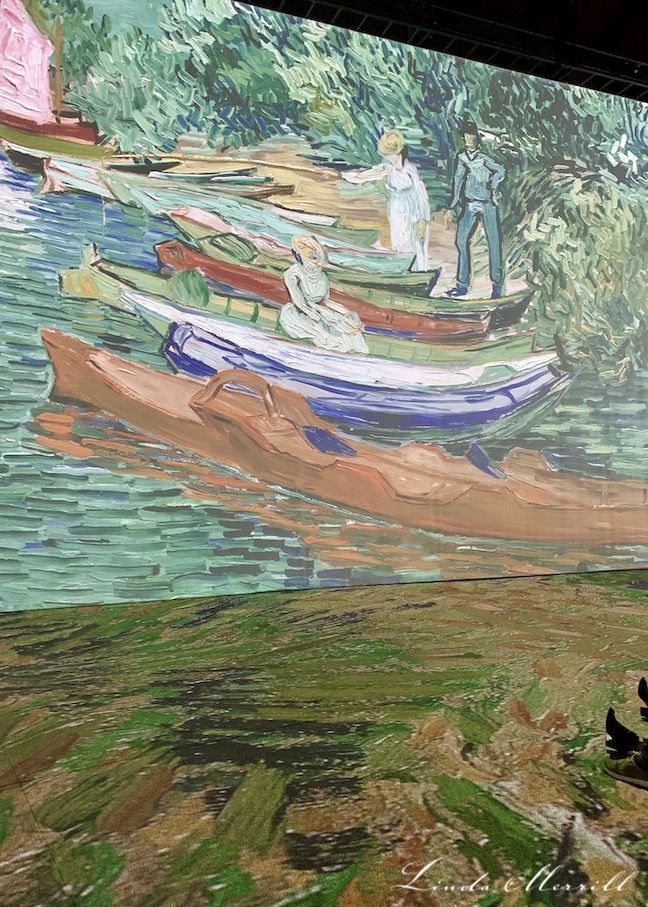 I took a panoramic shot which isn’t great but does show the scale a little bit.

Van Gogh’s most well-known work, Starry Night, made a brief appearance. You could hear an audible reaction from the crowd when it appeared but also a similar reaction when it faded a little too quickly. People like to see what they know and the world knows Starry Night! I do have to say, my personal preference is for this Starry Night (La Nuit étoilée) which is at the Musée D’Orsay. I don’t recall seeing it at the show yesterday, but when I saw it in Paris a number of years ago, I literally burst into tears standing in front of it. It was a little embarrassing, but then, the whole point of art is to bring on an emotional reaction. And so it did.

You can see a short video I took here.

And finally, wishing you a very Happy New Year and here’s to a brighter, healthier 2022 for us all! I so appreciate my clients, readers and those who take the time to comment on my blog! 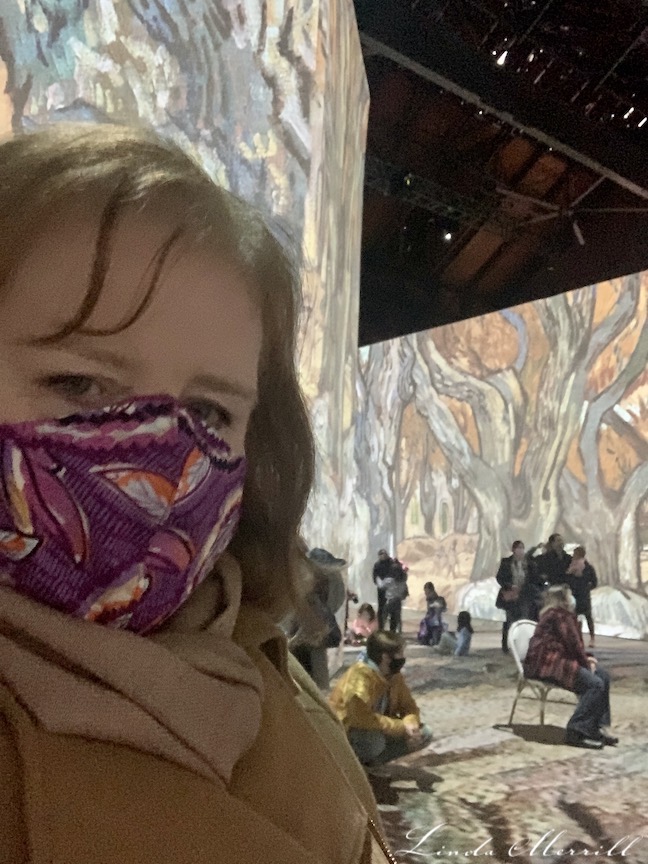