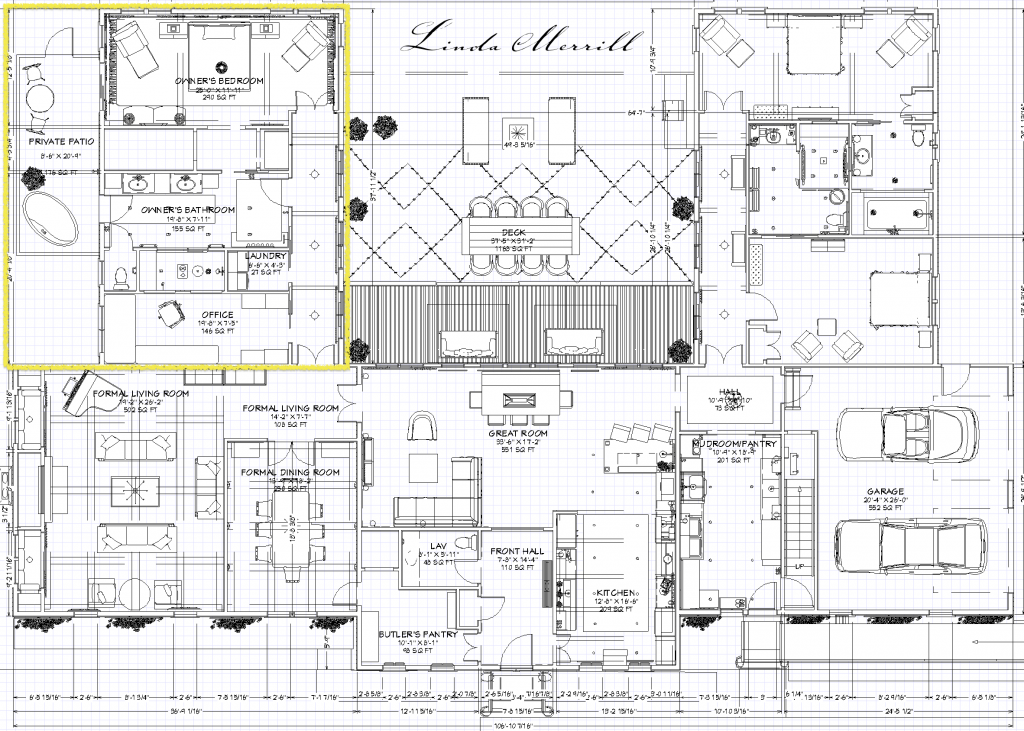 Hello – I hope you’re having a great weekend. It’s been a while, but I have some updates to share on the Dream Home 2021 (now dubbed 2021 2022 because, 2022). I have been working on the Owner’s Wing which you see highlighted in yellow above. The owner’s wing consists of the primary bedroom (aka main bedroom, principal bedroom – and formerly known as master bedroom), bathroom, laundry closet, home office and a private patio with hot tub and outdoor shower.

As an aside – the interior design, architectural and real estate industries are in the process of transitioning away from referring to the owner’s bedroom/bathroom as “Master” primarily because this historically male skewing term is outdated since homeownership is no longer a male dominated thing (and really hasn’t been for decades). I haven’t comfortably landed on an alternative term. I do refer to this as the Owner’s Wing and therefor bathroom and bedroom. For clients, I’m using “principal” more often than other terms. Change can be hard, but part of the job of a designer is to create a space that reflects the client and leaving 50% out of the equation doesn’t seem right.

Here’s a closeup of the owner’s wing. My early plan was to have a laundry close to my bedroom/bathroom but I dropped it at some point. When I was designing the big mudroom/laundry room I figured it was sufficient for the main house. But the more I considered it, it didn’t make sense to schlepp laundry across the whole of the house. So a small laundry with stackable machines made it back into the plan. The office could work as a craft/sewing room as well.

As you’ll see, the bedroom really isn’t that big. I don’t find it necessary to devote a huge amount of space to a bedroom. It’s has a lot of windows and sliders out to the private patio. I would have liked a fireplace but there’s not a lot of room for one. As I’m writing this, I decided to add one to the patio area.

The closets (not marked as such for some reason) are a walk-thru from the bedroom to the bathroom. Looking at the plan below, the space on the right would be for pull out shoe, flat clothes and accessories drawers. The space on the left would have hanging clothes.

The bathroom has a double sink with storage, vanity table and chair, steam shower and water closet. There is a door leading out to the private patio as well. There is also a door from the hall. Adding the laundry closet also meant that I could have a steam shower since the steam unit could be placed next to the washer/dryer with access via a cabinet door. 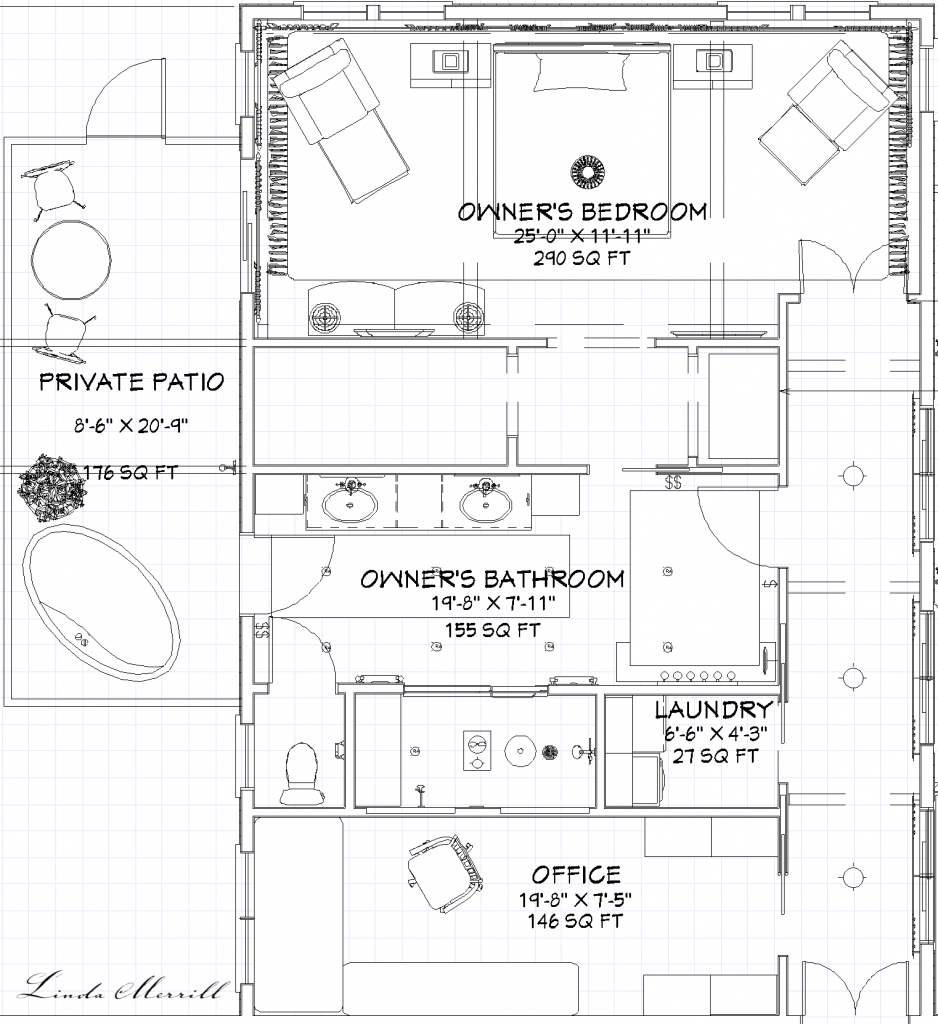 Decorative choices are still a work in progress but I wanted to share where I am. I wrote a sponsored post for Ever Wallpaper and fell in love with their aptly named Big Flowers paper. I am an unapologetic pink floral girl! 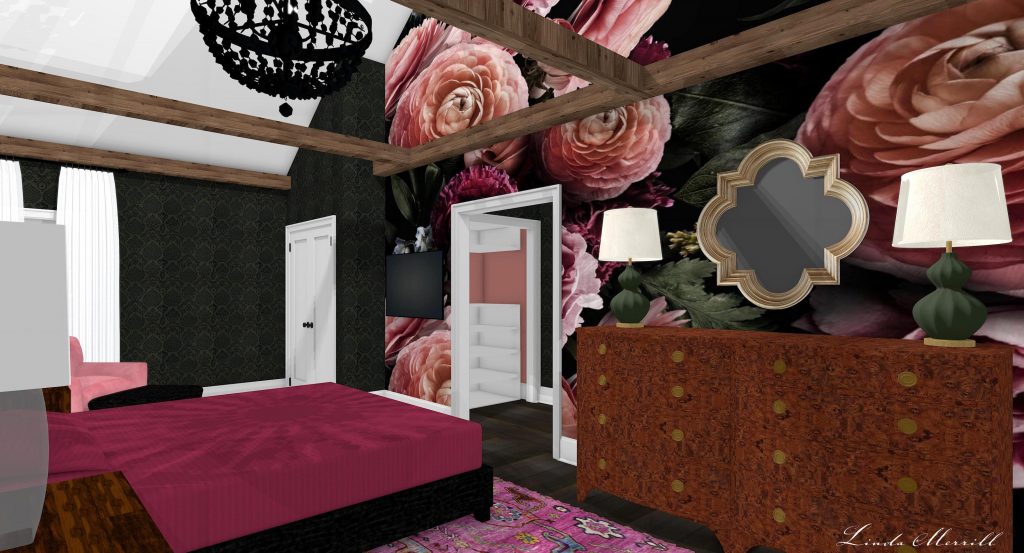 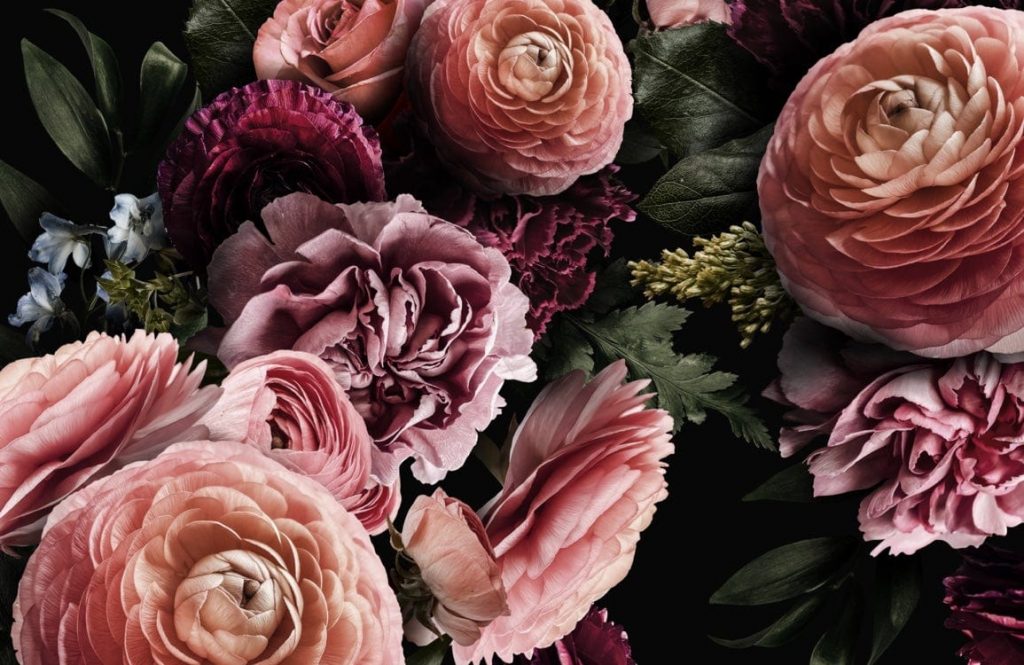 I am toying with this Scalamandre Surat Sisal wallpaper for the rest of the walls. Too much? I may consider a paler rose color as well, but I do love a black wall and think this textural wallpaper would be really fabulous. 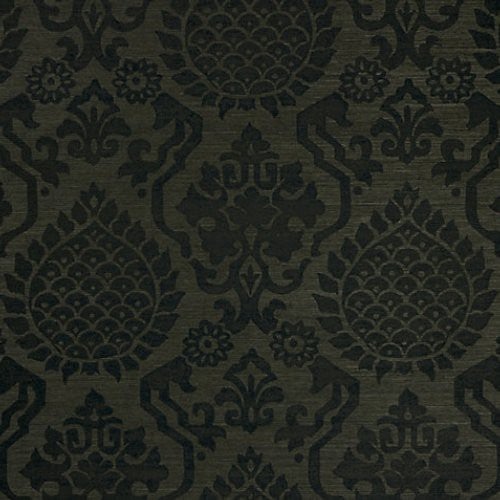 I’ve made no other real decisions other than lots of sheer drapery. The windows would all need blackout shades as well. The ceiling is vaulted with old beams. I currently have the ceiling paint white, but think it’s too stark and contrasty with all the black. I might keep the black but do a pale pink ceiling. All other decisions to be made. 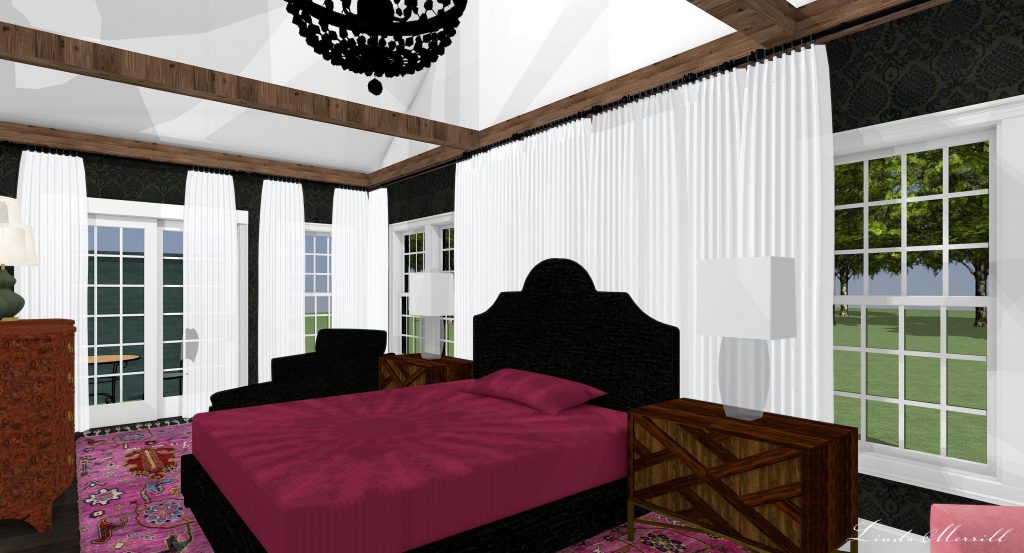 On to the bathroom – see, I told you I am a pink girl! I fell in love with this Agate Art in Himalaya ceramic tile from Tilebar. It comes in 24×48. 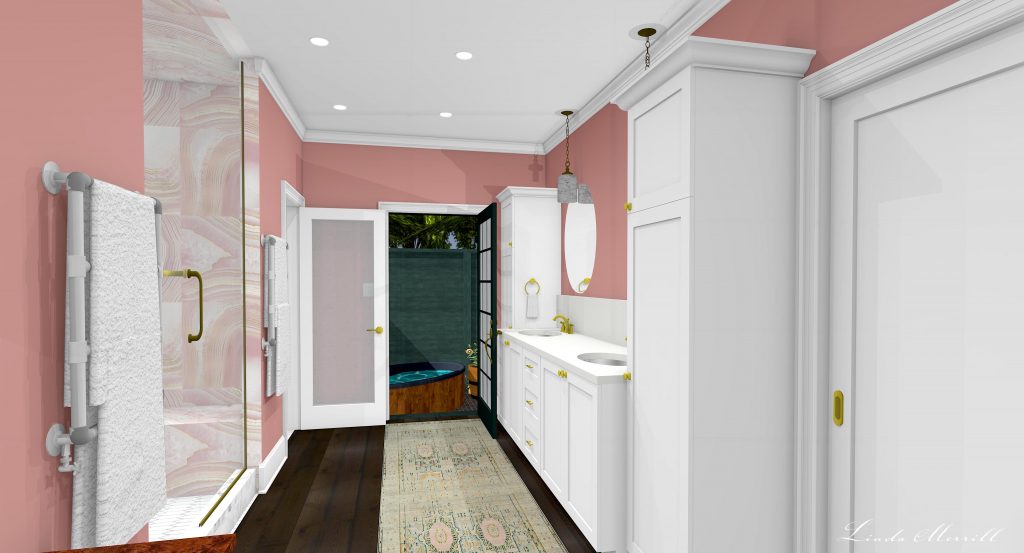 I know all white cabinets are a little boring and “done”, but I do like them in a bathroom and I think the shower tile is really the star that everything else just has to service and stay out of the way visually. In this view above we’re looking out towards the patio with hot tub and outdoor shower. The door on the immediate right is the pocket door to the closets and bedroom.

The plan would be that for winter use, the brick patio would be heated to keep ice and snow at bay and there would be a retractable awning overtop. There’s nothing like sitting in a hit bubbly tub outdoors on a cold night! 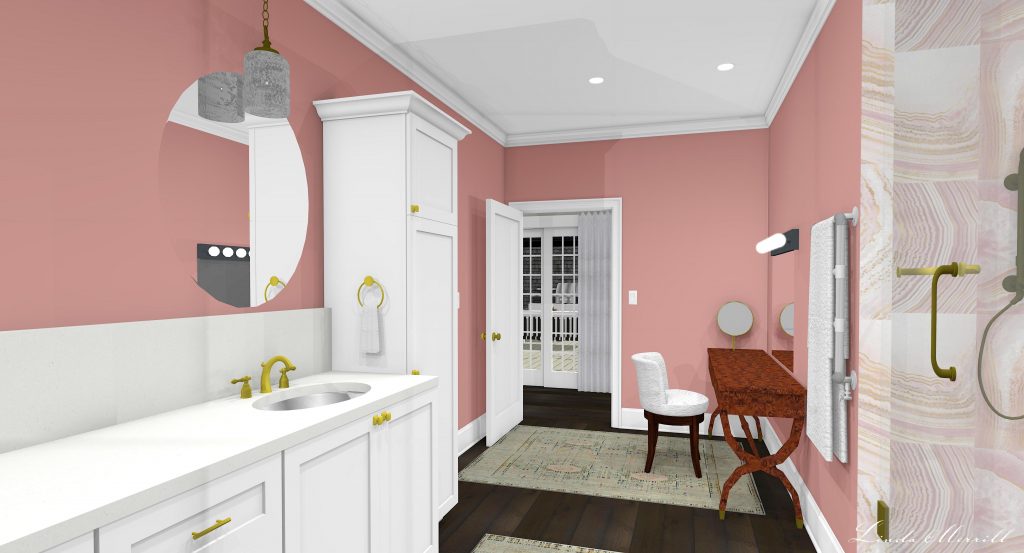 And above we see the door to the hall and vanity/makeup area. 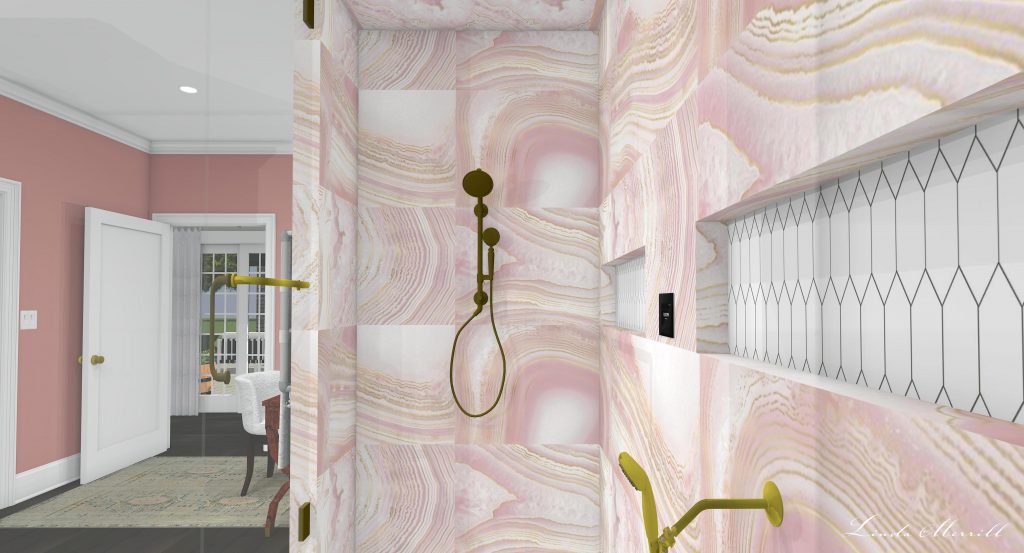 Above and below are inside the shower. Some details are still missing, I haven’t selected the faucets and other fixtures yet. The white picket tiles in the niches and floor as also place holders – though I do like their simplicity. 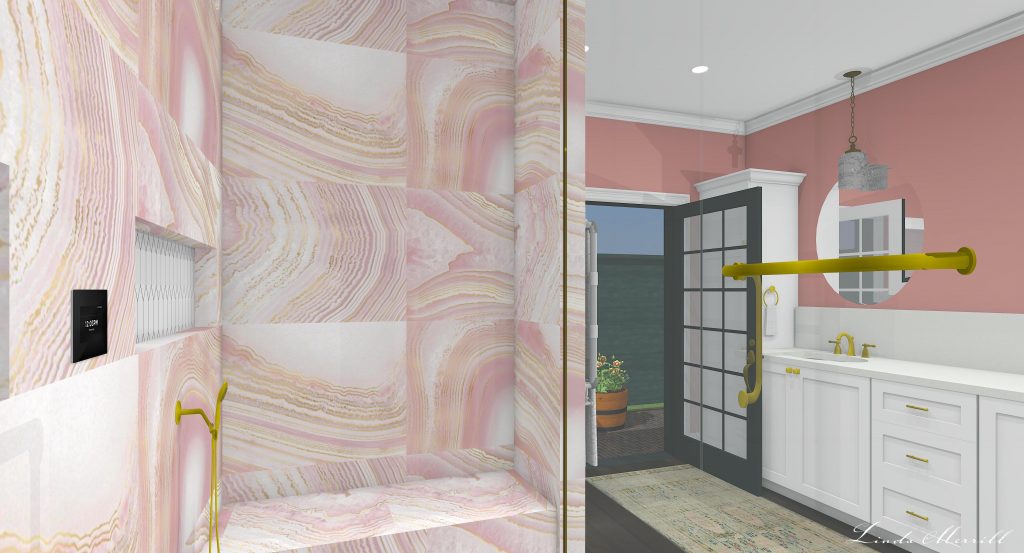 So, that’s where I am so far on the Dream Home owner’s wing. What do you think? Too much pink?