One of my most popular blog posts has been on the subject of how wide should drapery panels be, followed by how high should drapery panels hung. But, what to do with mismatched window sizes? Rooms often have a mix of narrow and wide windows – this was the question posed by a reader earlier this week. While I touched on this in my original post, I thought it’s such a good question, one even designers ask about, that it is worth its own post.

First, a little about why this might matter. Firstly, we always want the drapery panels to look “right” in scale and proportion to the window and the room. Narrow panels on a wide window run will look skimpy and cheap (even if custom made). Too wide panels on a smaller window may overwhelm the window and encroach on the view. There is also the matter of cost. Drapery panels require a lot of fabric. One width (1x) of fabric is usually around 54IN W.  With side hems, it comes to around 48IN. As you can see, 1.5 width and 2x widths effectively double the required fabric amount. If there is a pattern to match, this can increase the required yardage.

I’ll start with some of my own projects. Both projects below are homes in Hingham, MA. Both have a wide quad window run and smaller windows.

In the room above, the dining area (left) and living area (right) are adjacent spaces in open floor plan room. The drapery did not need to be functional (meaning, it didn’t need to close over the windows). The dining space on the left has two side windows and as you’ll see, the single window butts up against a wall – so wide draperies weren’t possible. In this case, we opted for 1.5 width panels (approx. 72IN W) for a nice full look that didn’t block too much of the window. The same size panels on the big quad window on the right would have looked skimpy, so we opted for 2x width panels (approx 98IN W).

This project above was a big bonus room in a townhome. The double window on the left faced front and the quad window on the right opened out to the back deck. The double window had clear boundaries but the window was also off center,  so it made sense to fill that entire space with curtains to obscure the off center placement. The quad window did not need functional panels so we opted for 2x width panels on both windows. We could have gotten away with 1.5 widths on the smaller double window and it would have been visually fine as well but the double with was more luxe looking.

Shades of course come inside or outside mount which means either they are mount within the frame our outside and above the window either on the frame itself or completely covering the frame. Inside mounts look great on windows that have beautiful millwork or for a more architectural and structured look. Outside mounts work well for windows that may not have great frames, or to create the illusion of a larger window, among other reasons. 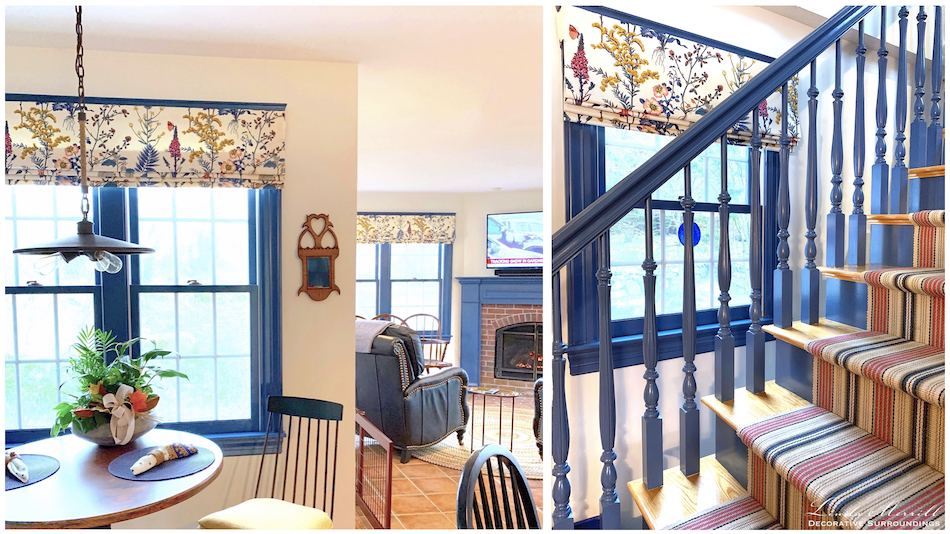 A basic illustration are these windows in my Colorful and Classic Cape Cod project. We had both single windows and double windows. The client did not want to hide the window frames, but the windows were very shallow and inside mount shades weren’t really doable. While I did recommend these be hung above the window frame to the ceiling, we ended up doing them just under the top molding piece on the window. They are framed nicely by the bright blue molding. A note – these were faux romans in that they were not functional shades, they were just made to have the appearance of them. This is a big cost saver in both the mechanism and how much fabric is needed. The placement of the pattern is important when doing the same fabric on different width windows as well. In this case, the pattern is laid from the same center point out.

This is my Dream Home great room. I’ve not worked on the actual furniture, fabrics, rugs and wall colors yet (I have A LOT to do!) But I do have the window treatments and fabrics selected. As you can see, it’s a whole wall of windows overlooking the back deck, pool towards the pool house. Many, if not most, people would not want window treatments at all, but I love them and feel they bring warmth and color to a room. I experimented with inside mount shades on all the single windows resulting in 5 shades on the central windows and shades on the sliders as well. But I thought it made it a little too busy looking. I tried drapery on all the windows, but that was just too much. So I landed on this with drapery on the ends, then the single shade, triple width shade and single shade. Because I like symmetry and matched heights, the drapery rods would be hung at the same height as the shades, just under the upper window frames, providing for a nice line straight across.

This image above is from Blinds.com so it makes sense that they are prominently displaying their roman shades. But this is a great example of a space with mismatched windows. On the left we have large windows with huge romans on them. Then a skinny naked window. Then the triple windows over the sink. The romans on the left look overwhelming in this image compared to the smaller (though still large) romans over the sink. If you notice, the shade over the triple window is pulled up in the center creating a two-over-three look. This is fine, though usually we would do three over three especially as this is a fairly wide treatment. However, the width of each swoop (not a professional term) roughly matches the width of the shades on the left. So a decision was made, seemingly, that matching widths of the shades would visually work best. And I think that’s fine. But the length of the shades on the left – how low they are on the window – seems to me to be too low, too overwhelming. And you have to wonder – would these ever be raised and lowered? And what of the single skinny window?  It looks very lonely! 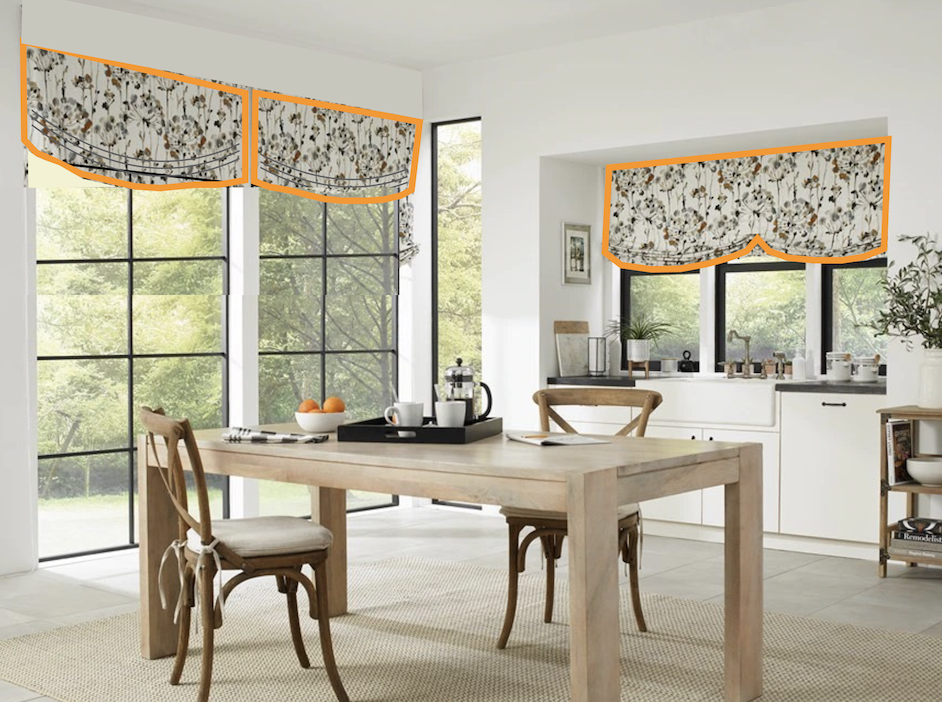 What do you think? How have you dealt with mismatched window sizes in your home?  LOOKING FOR MORE?

How High Should My Drapery Panels Be Hung?

How Wide Should My Drapery Panels Be?