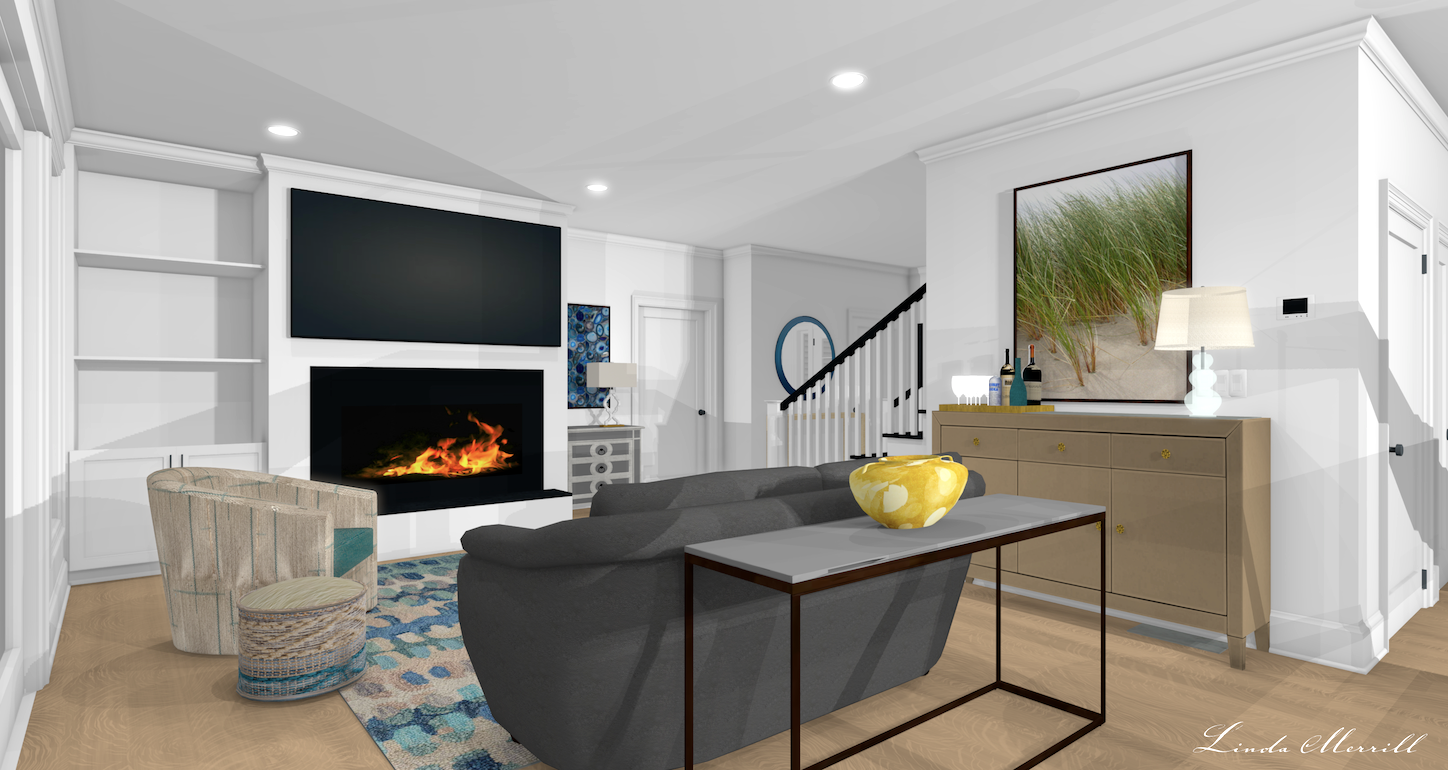 I wanted to share a new coastal casual living room project that I’m currently working on in Plymouth, Massachusetts. This is a new build home in The Pinehills and my lovely clients are newly retired having moved from another state to enjoy all that New England has to offer! As with many downsizing, they are looking for a fresh start with a more modern style and didn’t move with much of their existing furniture. 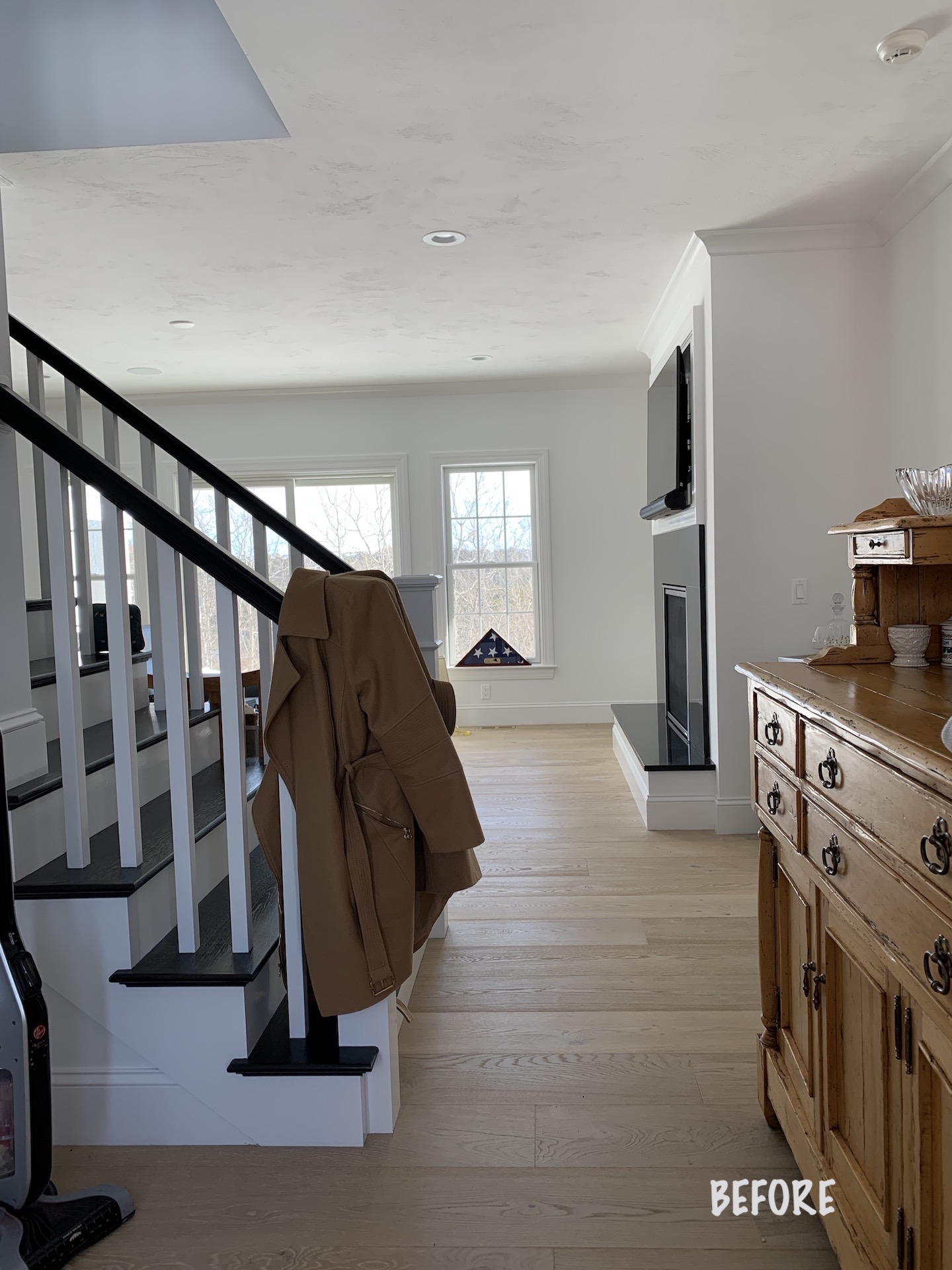 Above is the view from the front door. The cabinet on the right has been sold and a new slimmer console will take its place. There is a new cabinet that my client had already ordered that will be placed on the left next to the stairs to store her china and other entertaining pieces which were in the more country cabinet on the right. 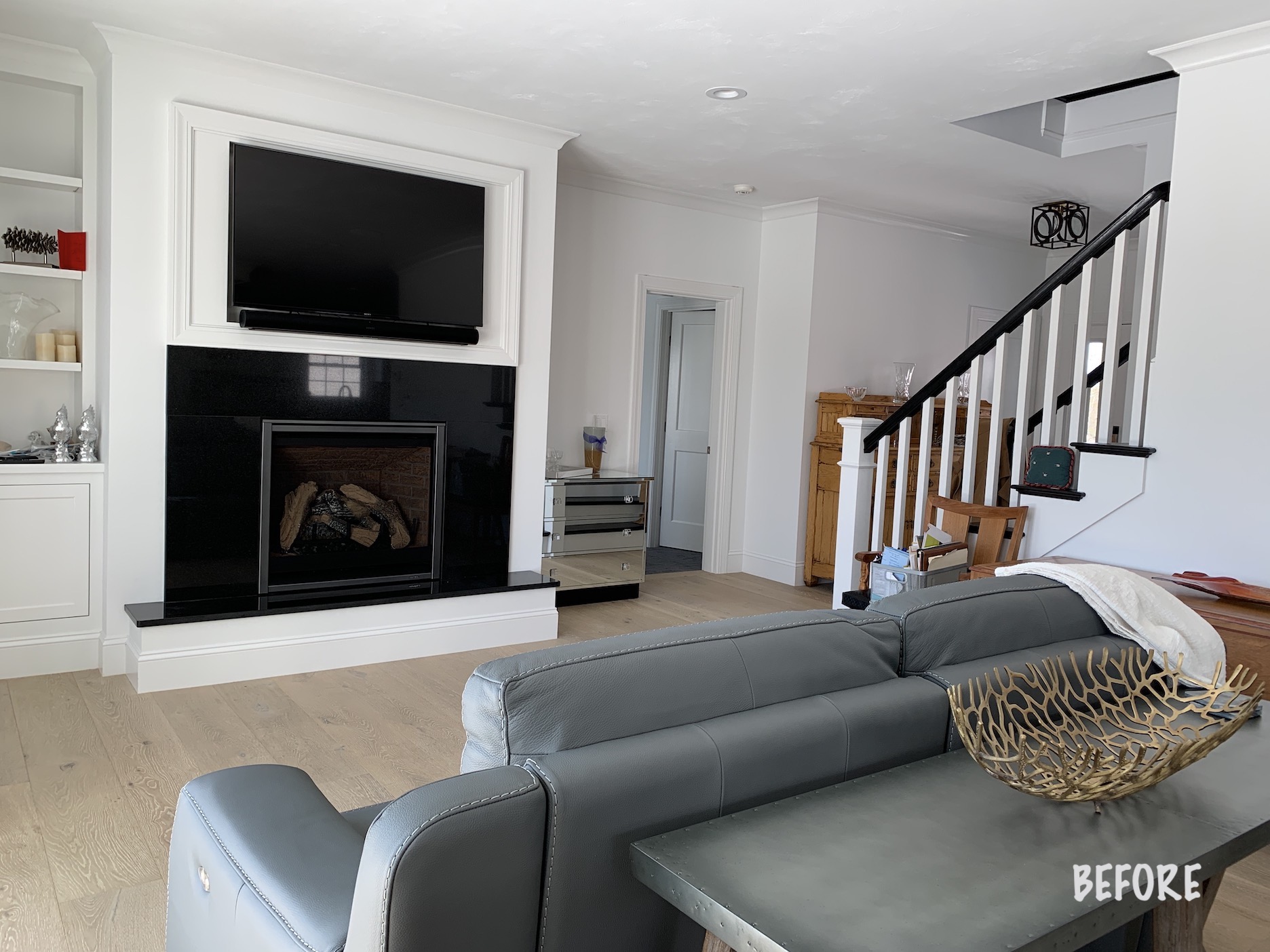 This open floor plan space is not large as you see. But it’s perfect and comfortable for two active people who probably won’t be spending a lot of time at home. Through the open door above is the master suite which we’re also working on and I’ll show another time.

The leather sofa and console behind it is pretty much the only furniture that needed to be kept. The television has been replaced with a larger one and inset into the wall which creates a much nicer sense of balance. 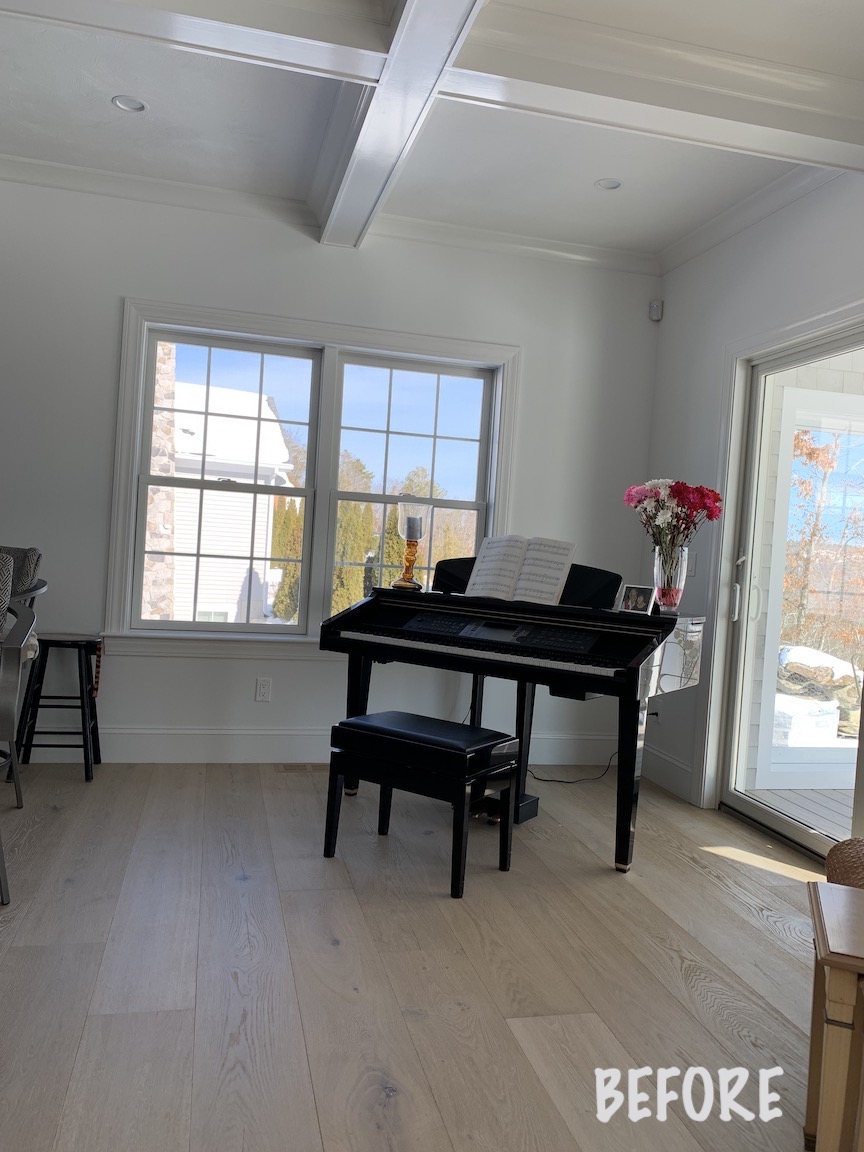 The above space is meant to be the dining area, with the kitchen peninsula on the left with bar stools. Unfortunately, this cute little electronic player/grand piano just wasn’t going to work if a dining area was to happen. I am loathe to tell clients that they can’t have something as beautiful and functional as a grand piano in a space so I left it up to my clients to sort out what they wanted to do. There was a space upstairs where it might have worked, but in the end, they decided to sell it. And, another friend/client of mine is buying it for his living room! He’s picking it up tomorrow so the pressure is on me to get their furniture delivered! We’re planning on starting to work on his living room at some point soon, so I will still be working with this piano. But he has a separate dining room so it’s going to work nicely in his living room.

So, here are the items that are all currently on order! The dining table is a drop leaf, 42IN Square when the leaves are folded down and 60IN round with they are up. There will be 4 of these dining chairs with custom slip seats (fabric TBD) and we’ll have two other dining size chairs in the space for when they are doing a sit down for 6. The sideboard has a marble inset on the top and will make a great spot to set up a bar and appetizers. In addition to the grey leather sofa, we’re doing a swivel glider chair with custom fabrics. The colorful rug has already been delivered. The smaller round pouf is on order and I’m having the square pouf custom made. It will have a structural frame so can act as extra seating, or casual cocktail ottoman. 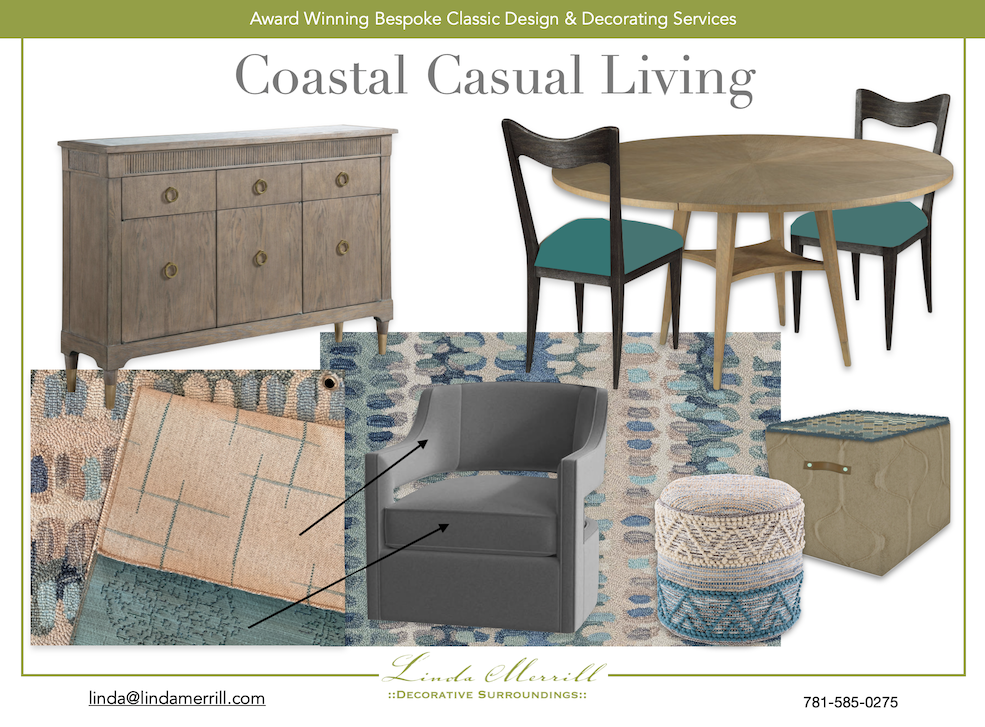 Everything above is on order. Some items are en route, others, like the swivel chair, are 6 months out at least. It is what it is these days! Other items such as the console in the hall, art and accessories are still being decided on. 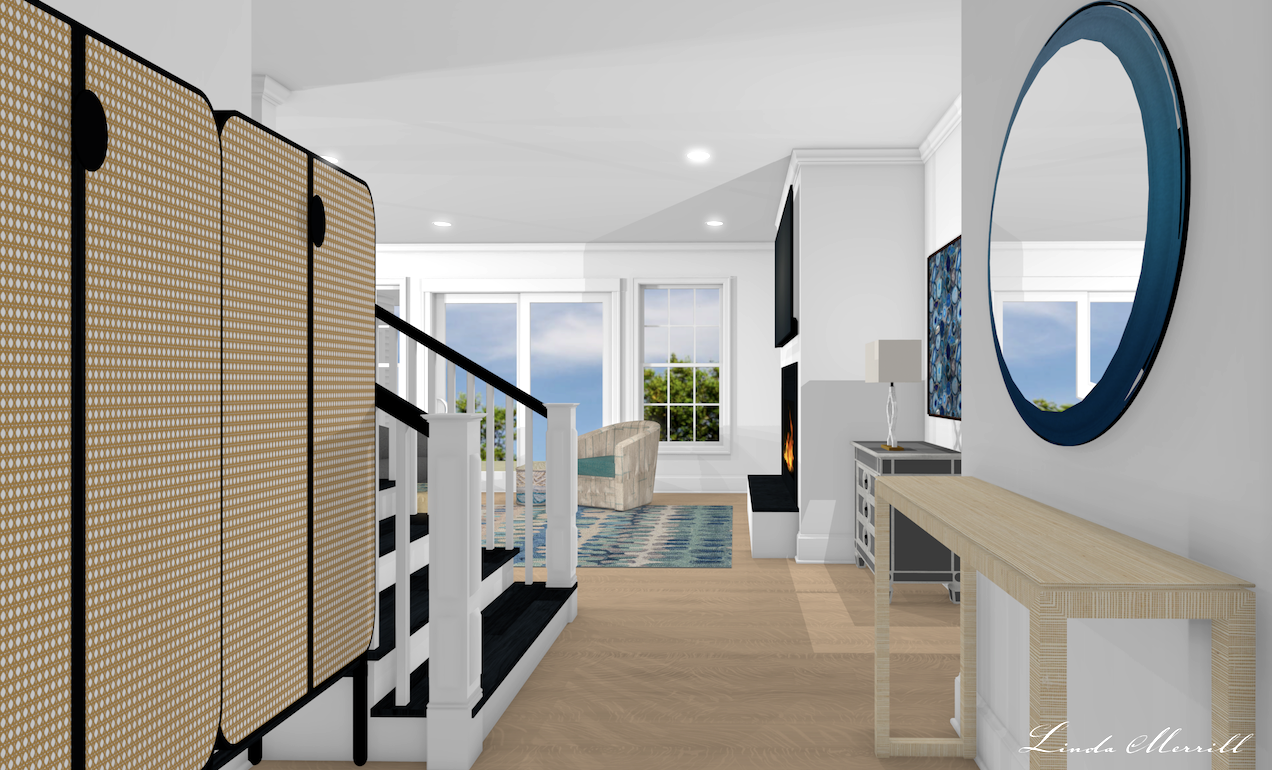 We considered doing a full built-in cabinet where the sideboard cabinet is below.

These were two ideas I came up with. But, in the end, the sideboard cabinet option made the most sense functionally, was much less costly and much more attractive. There was a floor air vent and light switches on the wall that were causing issues with placement. 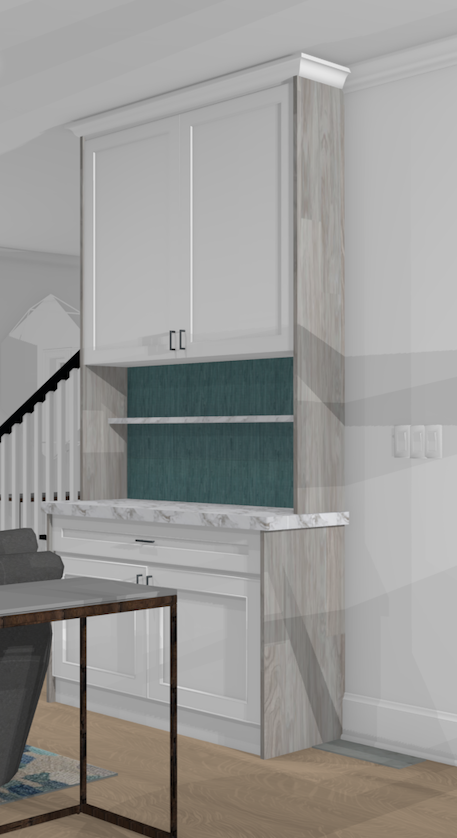 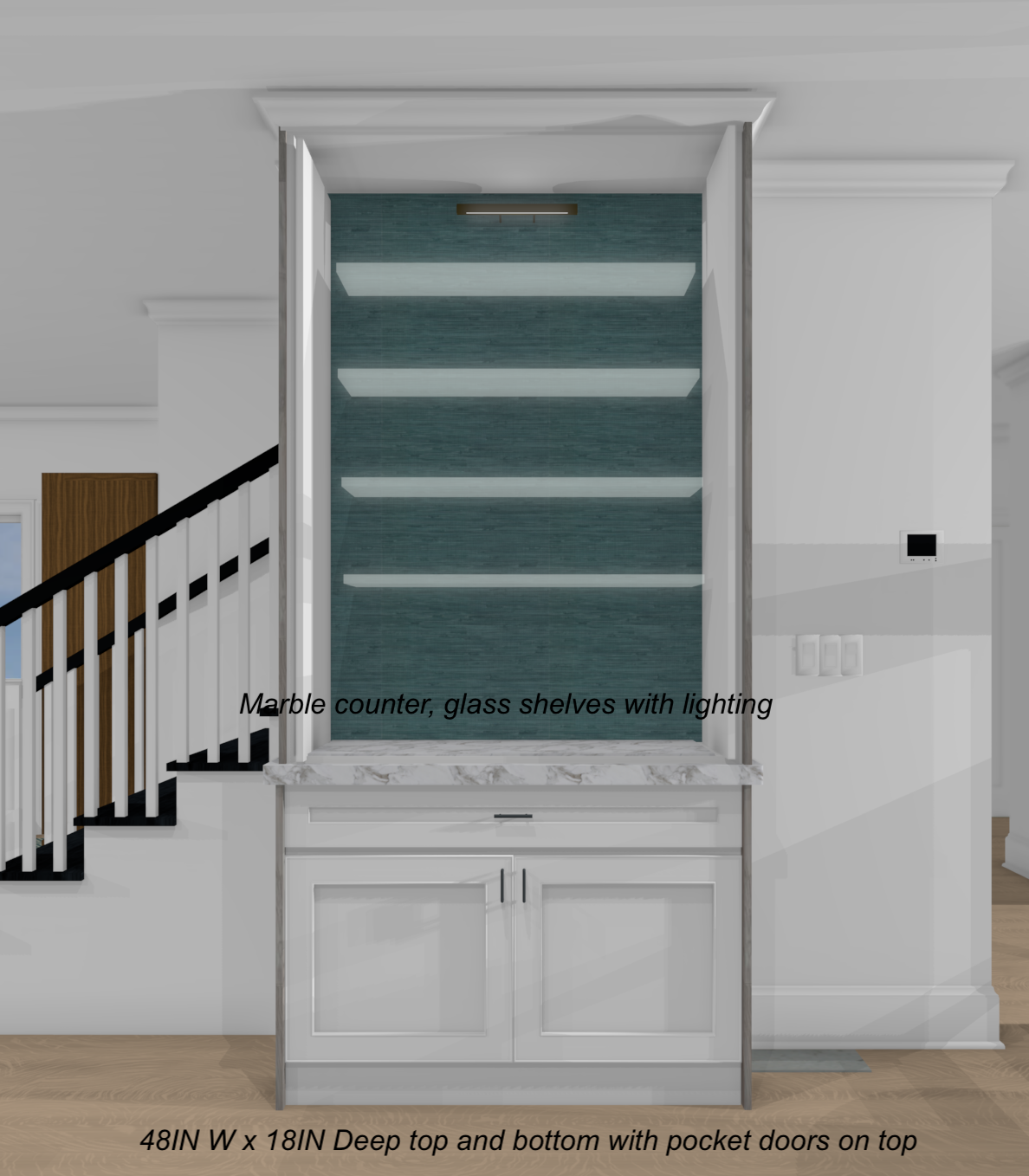 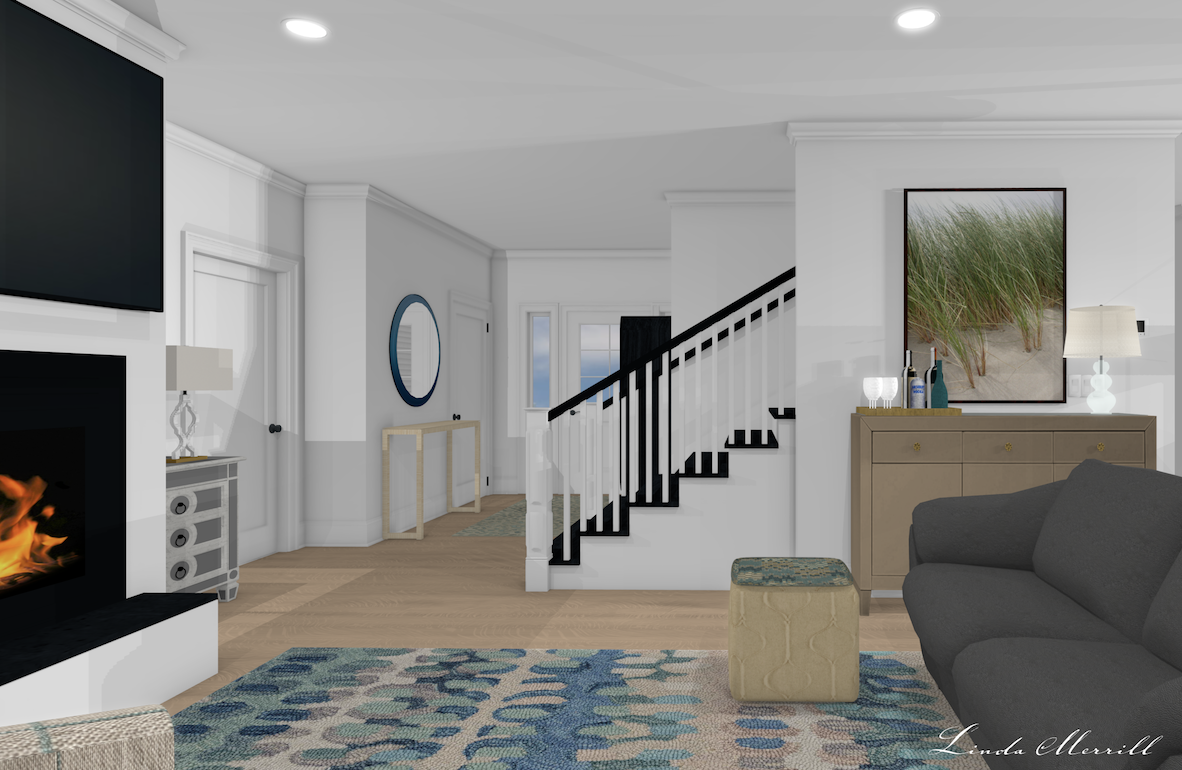 It was tricky getting the dimensions of the table and chairs just right so as not to be crammed into a relatively small space with the counter stools on the left and access to the screen porch on the right. 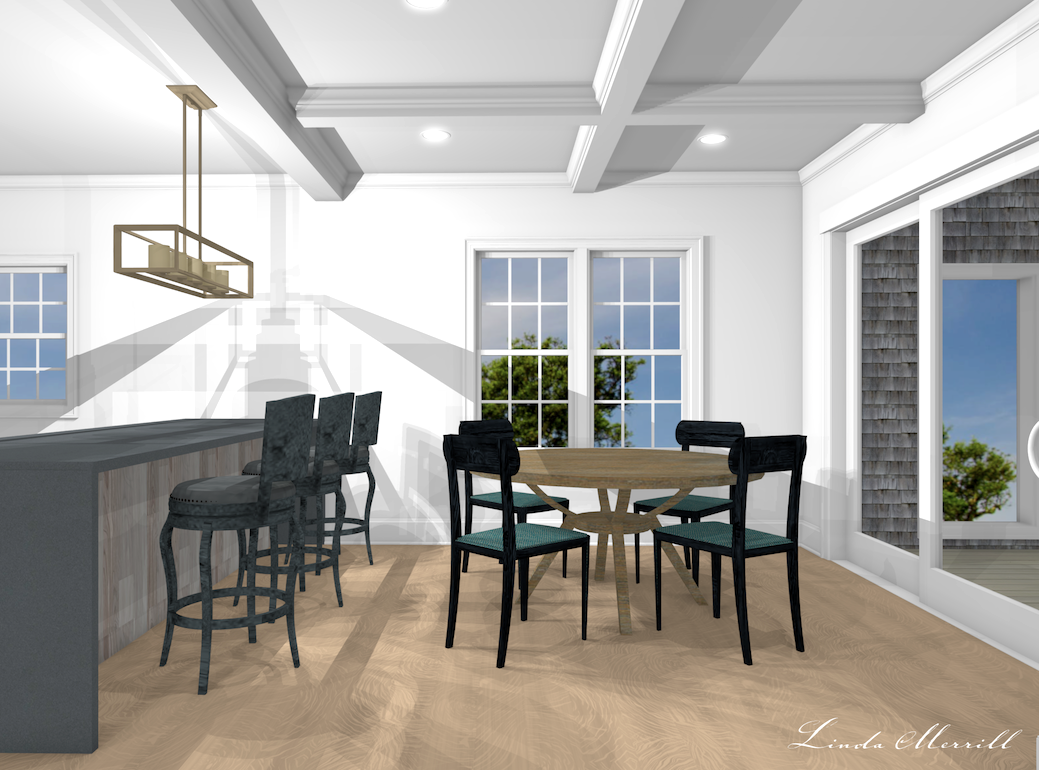 So, that’s it for the coastal casual living room for now. The style is sort of a cross between this Duxbury garden home and this Truro modern beach house.

My clients are currently enjoying the views and no decisions have been made about window treatments, though back wall of the house with the sliders in the living room are full due east – so sunrise comes early! Their bedroom also has a due east oriented slider. Black out drapery is on its way!