I was perusing Instagram and came across this stair rug runner installation above on the Annie Selke page. And my immediate response was eye-twitching and a verbal – oh no! This is the Kali Jute rug – which is very pretty as a standard rug, but to my eyes, it does not work as a stair rug runner. But from the comments on their post, I am in the minority as they ranged from “beautiful” to  “stunning” and “gorgeous”. While folks questioned the use of jute on stairs, the pattern placement didn’t seem to  bother anyone but me.

And this has always been the case for me when it comes to stair rug runners. I just can’t abide a random placement of a clearly defined or large pattern. 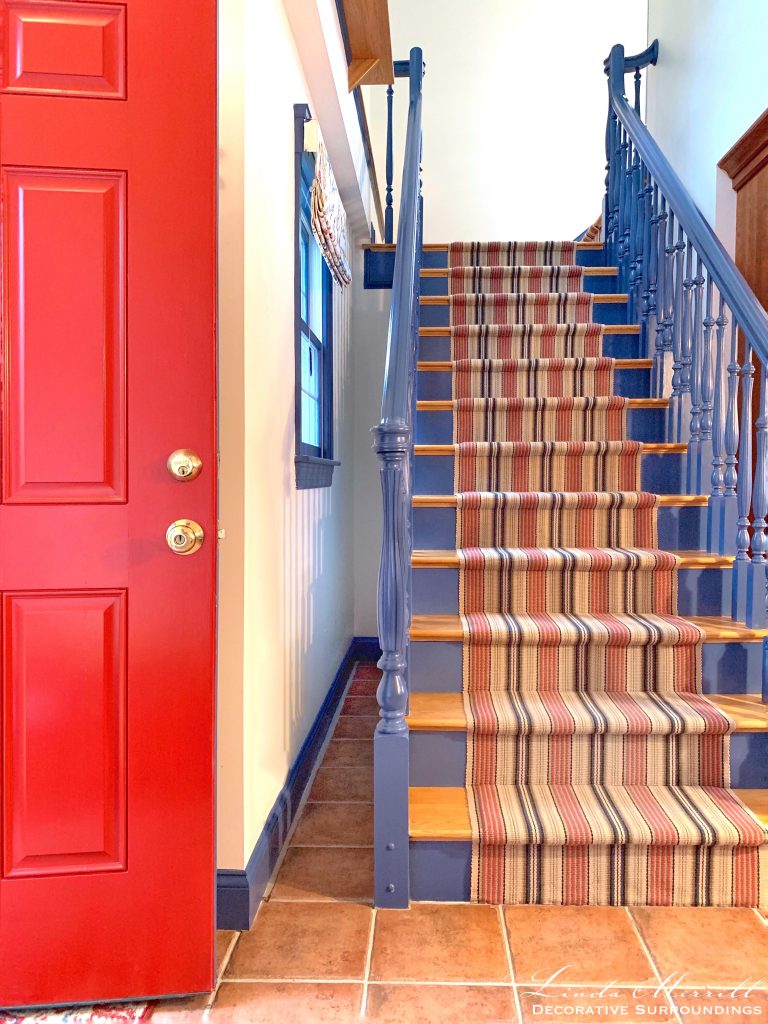 This above from my recent Cape Cod project is a flat weave striped runner from Woodard Weave/ Woodard and Greenstein. Nice and crisp straight lines worked well for this classic project. Especially on the turn up the stairs. 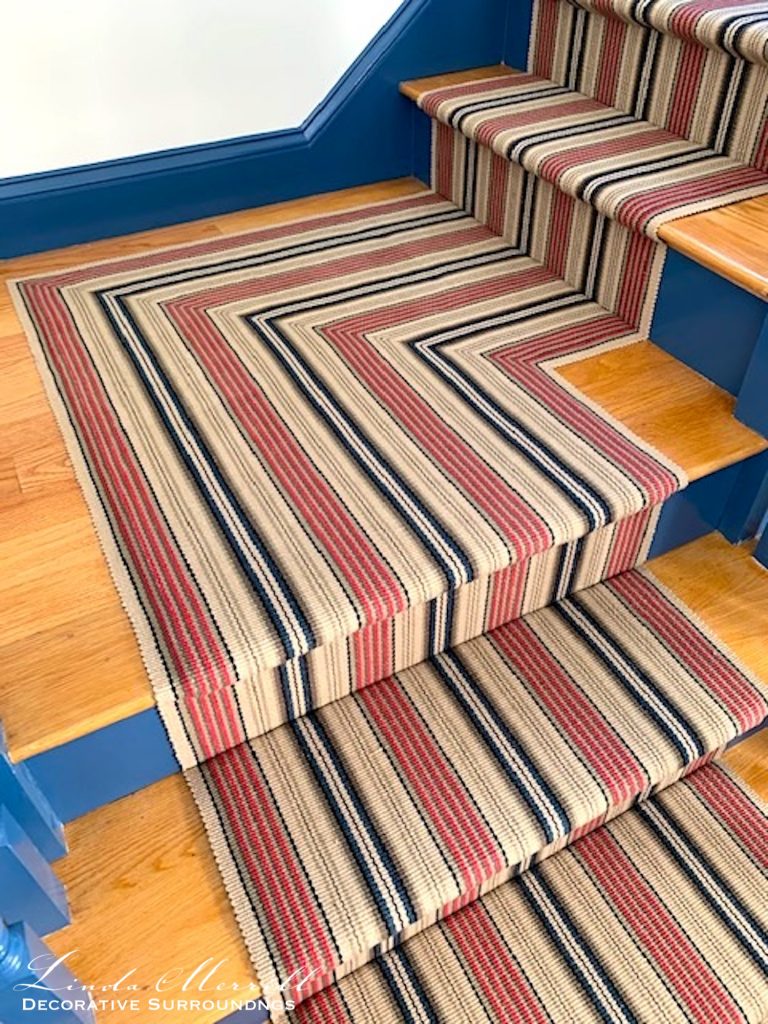 I suppose it’s a matter of personal taste.

Are you fine with this level of random pattern placement going up the stairs? I’m really asking as it’s so commonly done I must be in the minority. Of course, the color palette and strength of the pattern makes a difference to my eye. This pale Lucy stair rug runner from The Loom and Co. doesn’t bother me much at all even though the pattern placement is pretty random. The Loom and Company Piper rug was custom made for WG Interiors for this stair install. What I love about this is that instead of just letting the pattern randomly fall where it may up the stairs, the large medallion falls in roughly the same spot every three stairs. This is the focal point of the rug and where you eye will go. The other parts of the pattern are smaller and therefore less attention grabbing. Similarly, this Rose Leopard 2 carpet from Stark Carpets has been cut and installed so that central roses fall consistently down the center of the stairs. Quite a wonderful install given the curved stairs! The Rug Company is known for its bold and modern patterns. This Kelly Wearstler design Channels certainly is generally random on the stairs and while not my personal taste, doesn’t bother me as much because it’s so modern – regularity isn’t expected. That said, the parallel stripes do a great job in grounding this pattern. Technically, this isn’t a runner but a fully installed carpet, but my point is the same. And then there’s this striking rug and placement – The Rug Company’s Climbing Leopard by Diane Von Furstenberg – the planning on this install must have been done by computer. So, how do we know where the pattern will fall? Measure your stairs. The riser, lip and tread constitutes one “step”. You will see this mocked out below in green. Generally speaking, vertical risers are 7″ and horizontal treads are 11″. Depending on the lip and intended rug installation (Hollywood vs. Waterfall – see illustration below) each “step” is between 18-20 total linear inches. 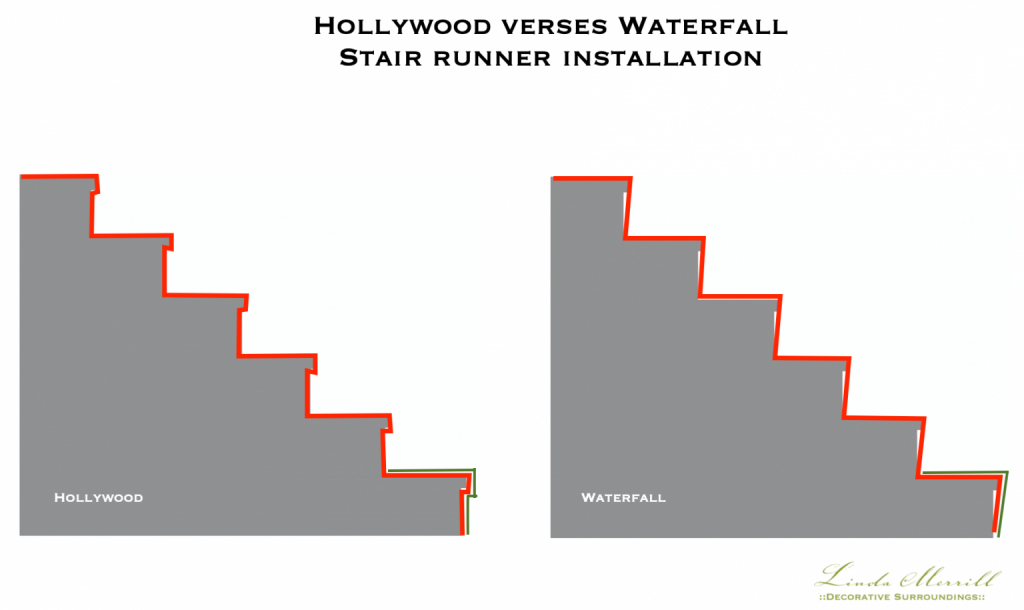 If you compare your step measurement with the pattern repeat of the rug you would like to use, you will get an idea of how it’s going to look installed.  A striped rug has no vertical repeat, it just keeps going. A clear repeating pattern like those I’ve shown above that’s smaller or larger than your 20″ (or whatever it is) step measurement, will appear randomly placed. This is normal and happens all the time as with the Annie Selke rug shown above.  But you have to decide – will you like it? I don’t and would avoid it at all costs.

Speaking of cost – you can install the rug to match your step measurement as some of the installs show above by cutting the rug up so that the pattern is placed where it’s wanted. But this will take a lot more time and skill on the part of the installer and there is a lot of rug waste. In other words, it’s a pricey option.

If price is a consideration and placement matters to your eye, then keep that in mind when selecting a stair rug runner.

As for the width of the runner, it can vary from nearly fully covering the stairs to a narrower rug that allows more of the stair to show. This again depends on the width of the stairs and the width the carpet comes in. If you’re using a broadloom carpet (the Stark and Rug Company examples) cut to size, it can be pretty much any width you choose. If you’re using a runner that’s been woven as a runner (such as the Annie Selke and the Woodard Weave stripes) then they will come in standard widths, depending on the brand.

So, what’s your opinion? Are you good with a less uniform pattern placement or are you like me – wanting a consistent placement?